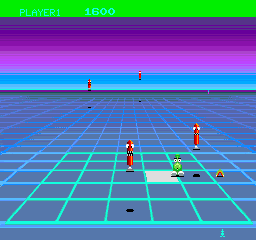 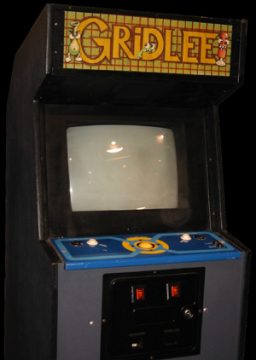 Sometimes, games are unremarkable on their own. They don’t really stand out aside from some mildly amusing gameplay or curious visual tricks that may have been impressive for their time. This falls upon a lot of arcade games hinging on the great crash of 1983 and for a few years after, though things did improve once companies like Sega and Capcom started releasing high-quality quarter-takers that would have many onlookers locked upon the screen in awe. Oh, to behold the splendor of a deluxe OutRun cabinet with fully-functioning hydraulics or Dhalsim finishing off Ryu with a well-timed Yoga Noogie with both lifebars deep in the red. However, not all games were that wow-inducing, and most were forgotten almost as quickly as they came, particularly after the economical game crash as previously mentioned. Times were so tough for some game-makers that a few cabinets never even moved past the prototype phase and failed to reach mass-production. This was the fate that befell a smaller-than-small time company known as Videa with an inauspicious little number entitled “Gridlee.” Before actual analysis of Gridlee commences, it should be made clear that it is not a bad game, but it’s not a particularly astounding one either. However, it is noteworthy to write about for the circumstances surrounding the game moreso than the game itself.

Gridlee is the name of the protagonist, a slim bottle-shaped green fellow with an opening in his head from which he is able to fire bullets. He is named thus as he lives on a grid, five-by-five squares set within a much larger grid that pans out into the horizon. Gridlee must defend his territory from invasive enemies who bounce around his grid and try to zap him. The normal enemies are Yumperz, crazy cylindrical beings that look like missiles attacked to pogo springs. They usually hop around one square at a time, but later levels make their patterns more erratic as they bound to squares on the entire other side of the grid. Starting at level 3, you are also introduced to the Fergies, resembling frogs with large eyes and two big legs, and they are even more erratic and unpredictable than Yumpers. Neither enemy actually squishes you directly, but they instead attempt to defeat you by electrifying the squares on which they bounce. Step on a glowing white tile and that’s the end of you, but zapping all enemies with your head bullets wins the level. You’ll have to watch out for when a worm quickly slinks across the stage, as they instantly light up any tiles they pass through and cannot be stopped. Stage 4 even gives you a particularly special foe named Igor, who can’t actually kill you but instead floats by and spits magenta goo onto a square. This stays on even after you lose a life, and it’ll cause you to slow down massively if you try to tread on it.

A ball will be bouncing around the grid at all times, always hitting right at the center of each square. It can be hard to align yourself properly and the detection for catching balls seems a bit fiddly (and you can’t catch any while shooting), but the 100 point bonuses you gain from red balls adds up. Catch enough red ones and you may eventually see a green ball that only bounces around on the four corners of the stage. It’s worth 500 points if you can bag it, but you’ll have to get somewhat lucky. Catch even more red balls and a shining star appears worth 1000 points. Unfortunately, it disappears the instant it hits the floor, so you need to get EXTREMELY lucky to pick up that bonus. The balls may not be important when you’re just trying to survive in later levels, and things already become incredibly difficult by stage 3 once the Fergies appear. The fact that you move much slower horizontally than vertically also further vexes matters, and there isn’t really much variety to be had beyond the fourth level.

There’s not all that much to say about Gridlee on a mechanical basis. The graphics aren’t bad by 1983’s standards, with an interesting pseudo-3D effect being cast on enemies as they bounce in from the background. Though compared to the enemies, Gridlee‘s sprite barely scales at all when moving to the top of the grid, leading to a bit of disproportionate relation between his body and the back squares. While it all looks fairly interesting, nothing about Gridlee as a game is the most fascinating aspect of it. What IS interesting is how it was one of an incredibly small quantity of LEGAL roms for the Multiple Arcade Machine Emulator, also known as MAME. Back in the earlier days of MAME, Gridlee was one of only three roms to be offered on the website alongside Bally/Midway’s Robby Roto and Poly-Play, a German multi-game collection. Videa apparently died before they could manufacture further game cabinets, so there was only ever one known Gridlee prototype ever made. With the original company bankrupt and no widespread machines for any other company to give enough of a damn to pick up the license, Gridlee was up in the air for freeware. It thus became a staple example of what MAME could do for those unsure about the wide (and somewhat controversial) world of arcade emulation. Gridlee has even been released as a standalone freeware game for the iOS in 2013, where hackers have managed to extract the entirety of MAME from its source code. Because of this, Gridlee was yanked from the App Store, effectively ending a small window of being able to emulate arcade ROMs on iOS devices.

Links:
MAME Download the ROM legally here.
Permission for Gridlee rom to be freeware (archived in the Wayback Machine)