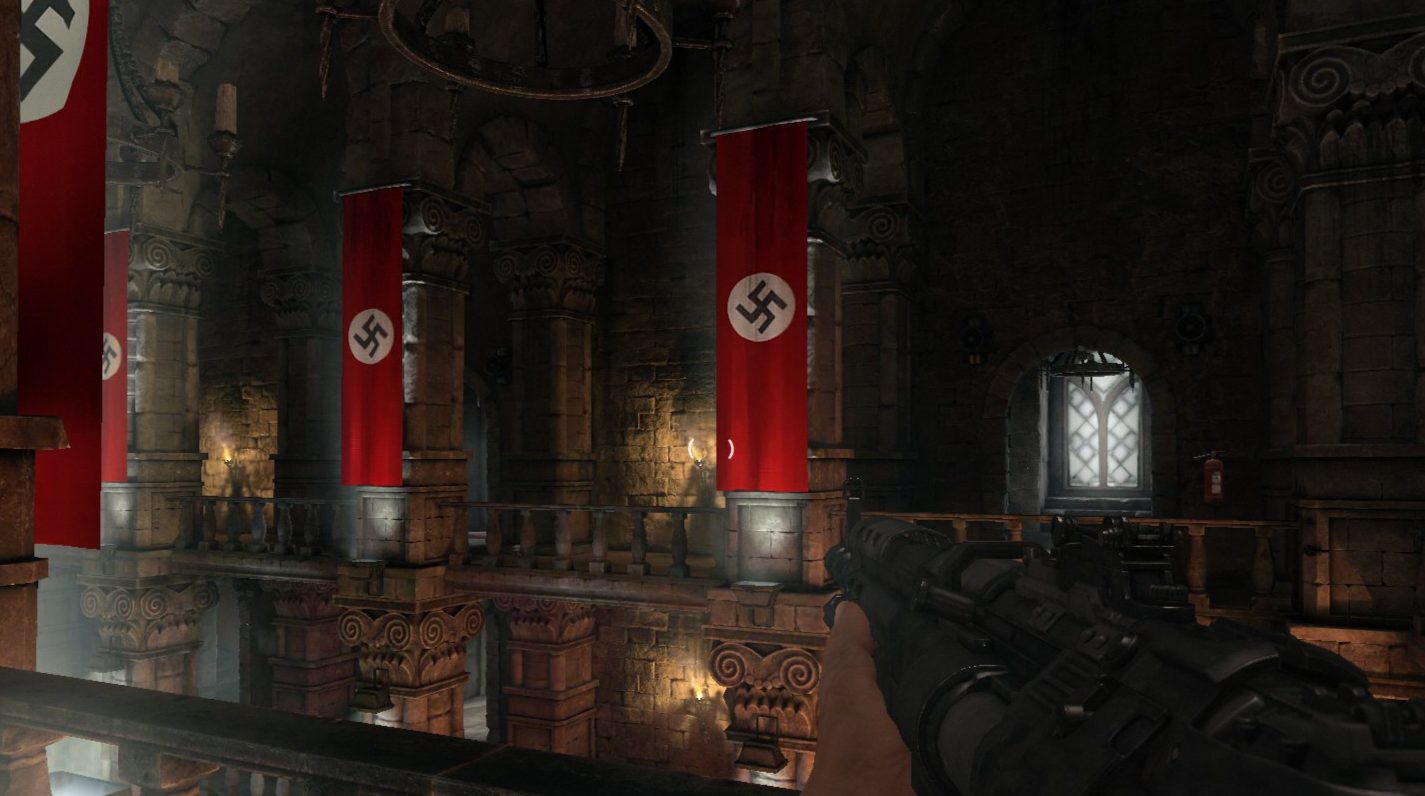 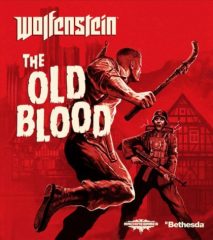 With the way The New Order ended, it’s hard to see where MachineGames could have found room to make a sequel, so they didn’t. Rather than trying to pick up the pieces, they instead opted to make a prequel. Wolfenstein: The Old Blood takes place immediately before The New Order‘s prologue chapter. It is early 1946, and Blazkowicz, still acting under the orders of the Office of Secret Actions, accompanies “Agent One” on an infiltration mission to Castle Wolfenstein. There, the two agents are to locate and liquidate Helga von Schabbs, the head of a special division of the SS, and obtain a top secret folder that contains the location of Deathshead’s compound (or in other words, the first level of The New Order). Of course, like any infiltration in the series, it doesn’t end well for either agent, and both are captured. So while the mission always remains focused on getting that folder, there are other things that tend to get in the way and need dealt with, such as Rudi Jäger, the captain of the guards, who is very attached to his Kampfhünds and won’t hesitate to sic them on you. 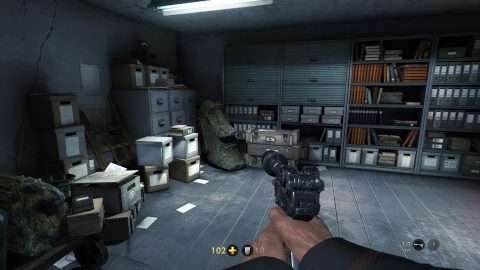 The Old Blood is essentially a stand-alone expansion pack; you do not need to own or have played The New Order to run it. Unlike TNO‘s chilling techno-industrial style, TOB is styled more as a B-grade “Nazi-sploitation” film, right down to the logo’s appearance as a 1950s horror film poster. It’s not a really overt change in style, as Blazkowicz retains his grim inner monologue, and the Nazis themselves continue to be portrayed as menacingly as they were in TNO. The B-movie presentation gets a little more obvious towards the end of the game – but more on that later. 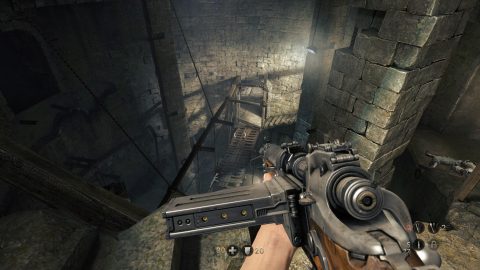 The game progression is a lot more akin to Return to Castle Wolfenstein, as you are never suddenly whisked back to base to receive new orders. The entire game is one long journey, with level transition cutscenes still taking place within BJ’s point of view as he pulls open doors and the like while the next level loads, though the game does take the time to tell you which chapter you’re on as you enter new areas. Beyond this, the game is clearly divided into two parts. Part One focuses on Rudi Jäger and his dogs, while Part Two shifts towards Helga von Schabbs, her SS Paranormal Division, and why they’re breaking into ancient catacombs (it’s zombies, by the way). 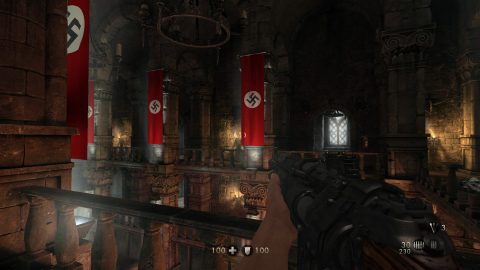 Speaking of Return, The Old Blood could be seen as a retelling; familiar locations such as the villages of Wülfburg and Paderborn, as well as new, alternative appearances for Agent One (who only briefly appeared before) and Kessler (now a bit more fleshed-out as a spy working undercover as a bartender) essentially overwrite the events of RTCW. Not to mention Helga von Schabbs, who is RTCW‘s Helga von Bulow, but not as fat. To a Wolfenstein fan, this might come off as a pessimistic tug at nostalgia; it does, however, encourage the player not to think too hard about the series timeline, as The Old Blood and The New Order can now be said to stand on their own, without having to worry so much about the canon of previous games. 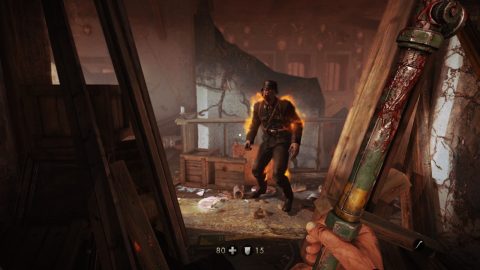 Of course, worrying about the timeline would only serve to get in the way of what The Old Blood really does well: it’s more of TNO‘s great gameplay, and it gives players more of a chance to wreak havoc, pre-timeskip. Since it’s no longer relegated to a prologue chapter, the World War II arsenal gets a significant expansion, with retro-futuristic takes on classic German firearms. Of course, the classic Luger returns, just as useful as it was before, with its silencer being acquired almost immediately. Soon after, the assault rifle returns as well, with a new three-round burst function. Then there are new tools like the Bombenschusse marksman rifle (nearly as amazing as the Mauser from Raven Software’s 2009 Wolfenstein), the Schockhammer slug-thrower, and the return of the double-barreled shotgun that appeared towards The New Order‘s first real chapter. The workhorse of Blazkowicz’s arsenal, however, is a simple metal pipe, split in two sections, that can be used as a brutal melee weapon, or for all sorts of utility purposes like prying and holding doors, turning valves, and even climbing walls. It even becomes a useful main weapon when the zombies begin showing up throughout the game’s second half. 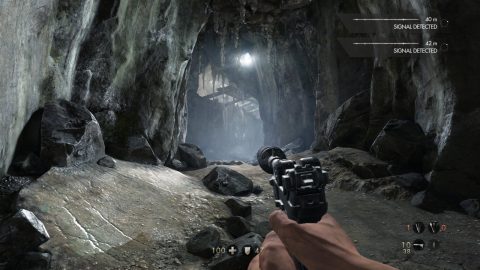 There’s not an awful lot else to say about the gameplay of The Old Blood that hasn’t already been said about The New Order. It is very much more of the same. Stealth and action work as well as they always have, the weapons are satisfying and have a variety of uses, the enemies are distinct and not especially frustrating. The level design of The Old Blood does suffer some linearity issues, but as with TNO, the developers are clearly trying to ensure that there are multiple ways to clear a given section, even if it’s nowhere near as in-depth as, say, a Deus Ex game. This obviously isn’t the case everywhere; some scenes, like the cable-car escape from the castle, really can’t be played any other way than with all guns blazing. There are also a slew of “nightmare” levels, based on the original Wolfenstein 3D. 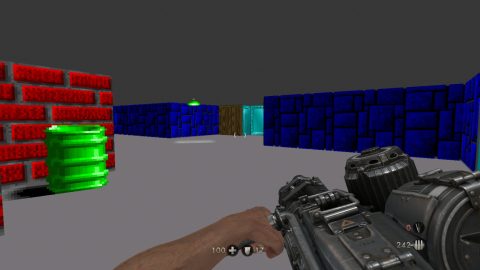 For those who wanted more out of The New Order, The Old Blood comes recommended, especially at its suggested budget price of $20 USD. It honestly won’t last more than about eight hours, and it still lacks multiplayer (though one can hardly blame MachineGames for that), but they surely must be commended for not trying to sell an eight-hour game at full price, unlike certain other first-person shooting franchises.