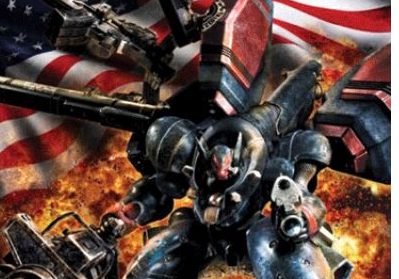 Released in 2004 and part of a small selection of original Xbox Japan exclusives, Metal Wolf Chaos was developed by From Software, the same company behind the Armored Coreseries, which would imply a good mecha pedigree. Except it was the Otogi team at From Software, not the Armored Core team, who were responsible for Metal Wolf Chaos. The Otogi games are, depending on who you ask, possibly two of the best games for the original Xbox, full of panache, incredible visuals, destructible environments and – in the case of the sequel – some deep combat facilitated by multiple levelable characters. Despite having little noticeable connection to the Armored Core games, Metal Wolf Chaos certainly lives up to the standards of From Software’s other Xbox games. 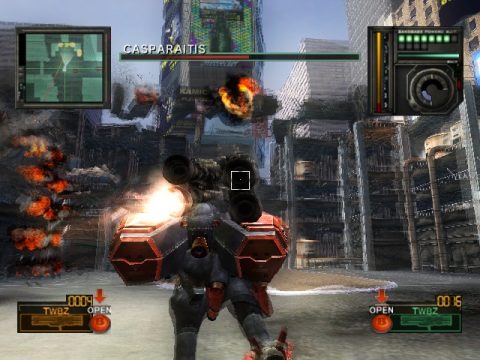 Those already aware of the game will probably know it because of its magnificently ludicrous story and dialogue, all of which is voiced in English. It’s impossible to talk about the story without also acknowledging current real-world politics, especially since they eerily mirror some things in-game. Set in or just after 2010, the United States of America is in the grip of a revolution aimed at correcting its internal problems. As the narrator explains: domestic terrorism has increased, there are economic disputes revolving around the price of fossil fuels, and there’s also rising unemployment. The incumbent President Michael Wilson is blamed as having done nothing to prevent this, and so Vice President Richard Hawk stages a coup d’état with the help of the military, declares martial law and brands the current President a terrorist. Hawk then promises “to smash this evil to pieces”. From here things get crazy as President Michael dons his mecha power armor, rampages out of the White House and jets off in Air Force One, determined to take back his country’s freedom. 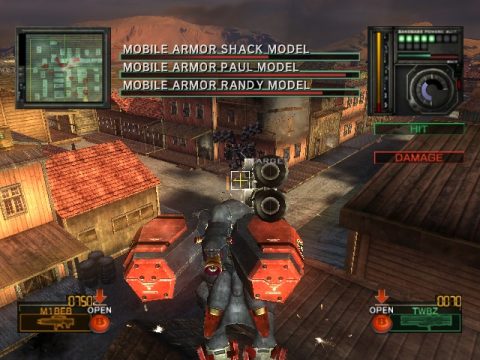 The remainder of the game sees you slaughtering American troops en masse and destroying huge sections of major cities in your bid for patriotic justice – with an unending string of hilariously embarrassing one-liners (Sweet, sweet! Oh you are so sweet Michael! Like gulping a cup of condensed milk!). The story and dialogue veers from awkwardly uncomfortable to laugh aloud hilarious, putting it on par with a brilliant stage comedian who’ll suddenly crack a joke which leaves the audience wondering if you can really get away with that in today’s politically correct world. All in though, and assuming you don’t take it too seriously, Metal Wolf Chaos‘ writing is a work of absurdist genius. 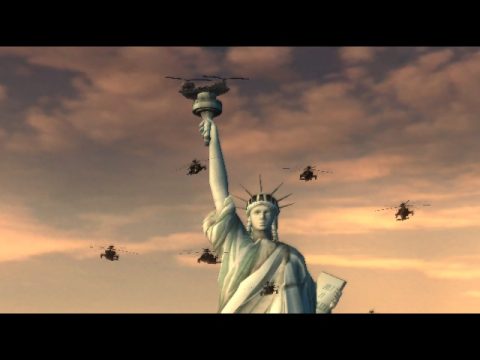 Ignoring the awesome/awful baditude of the script, the game itself also has a lot going for it. As already said Metal Wolf Chaos is far removed from the Armored Core series, lacking any deep customization. You’ve got eight weapon slots, four for the left arm, and four for the right, and that’s pretty much it. There’s also a stomp attack, which nets you bonus points at level’s end, but it’s too slow to warrant ever using. Weapons include handguns, shotguns, machine guns, assault rifles, sniper rifles, bazookas, a variety of missile types, grenade launchers, railguns and flamethrowers. New weapons are unlocked first by spending research money on their division, and then spending more money and precious metal (hidden in each stage) to manufacture said weapons. It’s an interesting alternative to the usual practice of only allowing higher development tiers after level completion – it also means you can grind money to unlock the best weapons early. 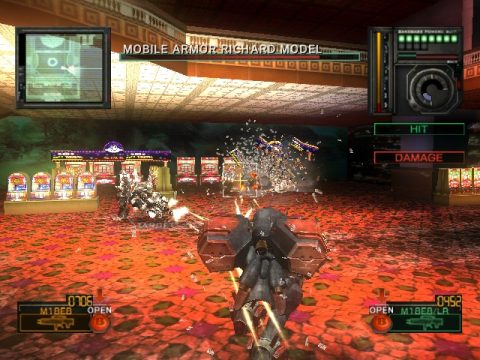 Besides weapons the attributes of your mecha, such as handling and speed, are pretty much constant. As a result Metal Wolf Chaos plays less like a stat-crunching simulation and more like a rough-and-tumble arcade shooter, full of swagger and bombastic action which relies on reflexes rather than thinking. The Armored Core series is undeniably excellent, as mecha aficionados will concur, but for those put off by its cerebral complexity MWC offers the perfect antithesis. Although there are over 100 weapons, once you’ve researched the best bazooka and manufactured two of it, most levels become a cakewalk where you can simply stand still pumping away until nothing moves. 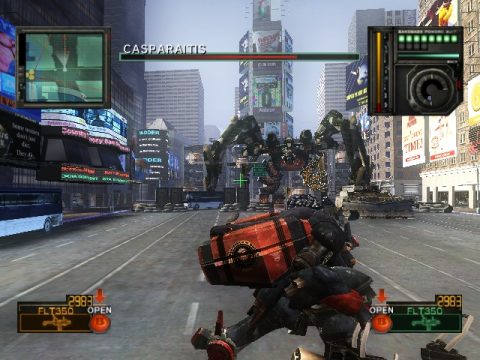 There’s also a chaining mechanic to scoring, with a higher chain achieved by quickly destroying enemies in succession before the chain cancels. At the level’s end you’re graded on this and it affects your allotted payment. It’s a nice idea, emphasizing the arcade nature of the game. In options you can even choose to toggle your “Presidential Score” at the top of the screen. This is great for those who like competing for score, but you don’t need to keep track of it to complete the game – totally ignoring the chain mechanic should still net enough cash for upgrades. 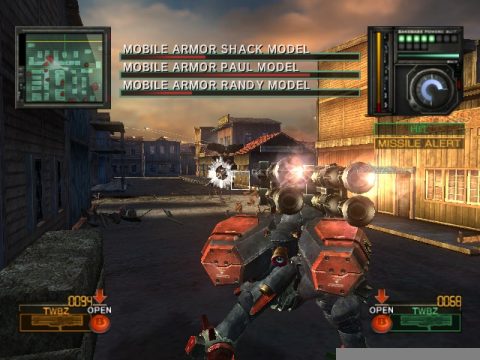 Action takes place over 14 stages: 13 in major US cities while the final level is aboard a space station. In every single mission the only goal is to destroy all enemy targets, in some cases with a time limit. Every stage also has optional sets of hostages to find and be rescued, plus energy pods to collect. Saving hostages unlocks new music tracks and special weapons which can’t otherwise be accessed, while for every 5 energy pods you get an additional shield for a maximum of 16. There are also a series of cool unlockables to work for after completing the game, such as higher difficulties and new camouflage for your mecha (including one which dresses you in the Stars and Stripes flag). It adds a fair amount of replay value to what are otherwise short and simple levels, stretching the game from just under 10 hours to around 15 if you’re a completionist. 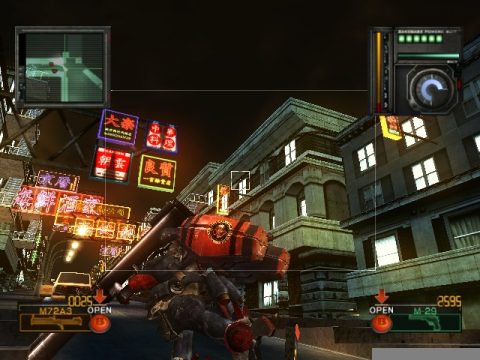 Metal Wolf Chaos‘s shield system is actually quite ingenious. Each shield is represented by a green dot and a corresponding horizontal energy bar – taking damage depletes the bar, which when empty cancels out one of the shield dots. In effect, you can have up to 16 life bars. You can also dash which drains a separate vertical energy bar and which recharges when not in use. When this bar depletes it starts eating into your current shield unless you cancel the dash. This creates an exciting dynamic as you need to balance dashing at the risk of draining your limited shields. The question is: are you a fast patriot, or a healthy patriot? 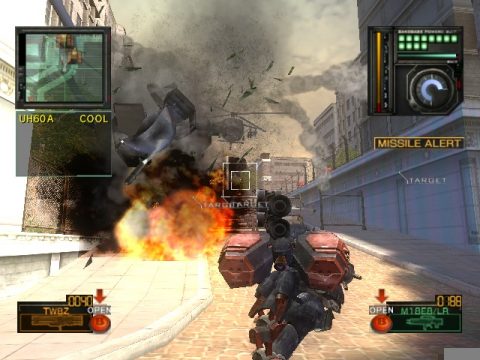 What makes Metal Wolf Chaos essential for all Xbox owners is how rich the experience is, despite its brevity and simplicity. One advantage it has over the Armored Core series for example is how detailed the visuals are. Whereas the current generation Armored Core games have been criticized for sterile environments, those in Metal Wolf Chaos are filled with subtle details. A particular highlight is the Las Vegas level, where every single table explodes in a shower of more casino chips than should be possible. It’s not quite as shiny as the Otogi games, but it’s still beautiful given the era. 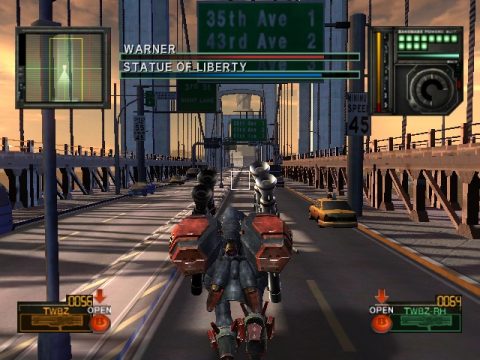 Also, every stage feels like an exaggerated set-piece from an A-Z of tourist hotspots. An assault on a bombed Miami Beach against a naval destroyer. Rampaging through the Grand Canyon. Riding atop Chicago’s rail system during a poison gas attack. Battling through San Francisco’s neon streets at night. Destroying an energy canon on Alcatraz Island. Or shooting bombs in swanky Beverly Hills. Boss battles are also suitably epic, including a fight against a gargantuan spider mecha roaming New York, hunting you down as you run through back alleys trying to destroy its energy generators. There’s also massive attack choppers, tanks, ships, and three mecha bandits to defeat as you take on the role of sheriff in a western ghost town. 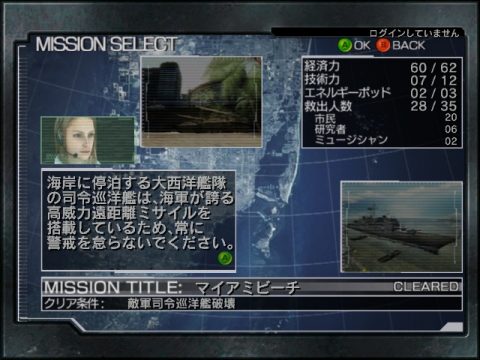 With a fun set of mechanics backed by superb visuals and music, plus an inventive scenario and set-pieces which put to shame a lot of what other developers do, it begs the question of why Metal Wolf Chaos never got a western release. It actually did reach the west, at least in demo form, on the Official Xbox Magazine Holiday 2004 demo disc. It’s hidden behind a secret button combination, and the menus are still in Japanese, but it’s still fairly easy to navigate. 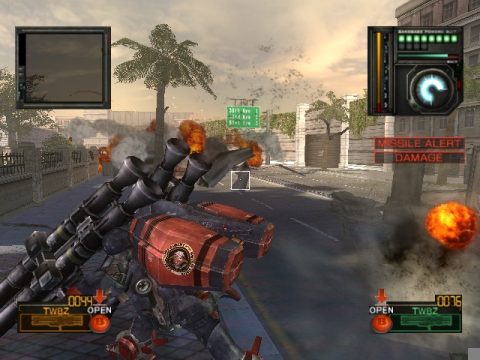 From Software has never officially commented on why the game never saw Western release, but it’s easy to guess that publishers would have been wary of the satire. For example the in-game news network DNN (obviously mocking CNN, though it probably has more in common with Fox News) spends the majority of the game misreporting events to insane levels, making the real enemy out to be heroes and the actual hero a heinous terrorist. In fact many of the themes present would have made publishers uncomfortable in 2004, from repeated terrorist events throughout the USA to American soldiers acting as suicide bombers (noted by your secretary Jodi in the Miami Beach level). It’s certainly feasible that certain news networks would have had a field day on par with GTA‘s Hot Coffee if they’d got hold of it. 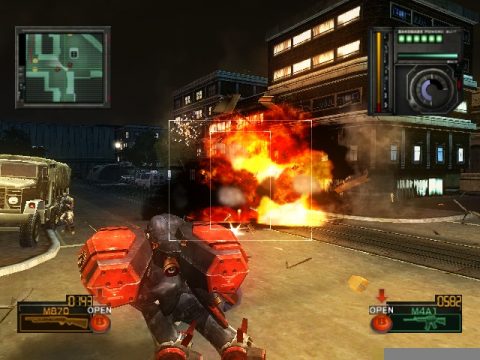 Whatever the reason for its failed release, Metal Wolf Chaos stands as one of last generation’s most annoying omissions. It’s an intuitive arcade-style action game with a tremendous amount of verve and more relentless style than most other games can ever hope to match. It’s the kind of game which, at one time, made Japan worth talking about.

There was an exclusive 10-track OST CD released in Japan, available only to those who pre-ordered the game. Titled The President Spirit (大統領魂), it’s a rather swanky item to have since the game’s music is pretty damn catchy. Apparently the 10 songs on the disc were all chosen by visitors to the game’s official website. Famitsu also released a “Perfect Guide” guidebook for the game.

We military men will never be cowardly lambs. We’ll be brave lions until the very end.

Time for my afternoon tea! Nothing like sipping some delicious Darjeeling tea, and watching you getting your clock cleaned!

Nothing is pointless and the reason is, because I’m the President of the Great United States of America!

Jodie! I’m going to step out into outer space.

You guys are roast chicken!

A heart of justice, is a heart that loves America!

This wild dog of war is on the move Michael! It’ll bite you if you don’t move it!

Jody, who am I? I’m the President. I always make the impossible possible. And I’m gonna keep on doing so.

Be certain now, as certain as the blood gushing out your nose when I bash it in!

Now, come at me with all your body and soul. I’ll hug you to death!

Stop shaking in your heels, senorita, and fight like a man!

Mr President, an alien has been sighted. Coup d’etat army versus US president versus aliens! Woohoo, how exciting!

Suck on my missile punch!