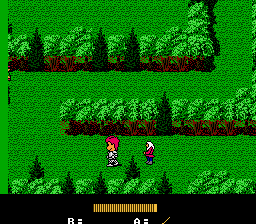 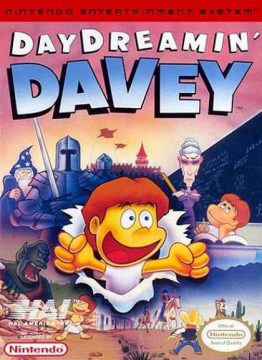 When the popular second party developer HAL Laboratory is mentioned, many different topics probably spring to mind. The company most recently got back in the spotlight with the tragic death of its former programmer and CEO, Satoru Iwata, but they’re also well remembered for many influential titles and characters in their more than thirty years of making games. Perhaps you’ll think of Super Smash Bros., the company’s ultra popular fighting game franchise that pits many of Nintendo’s legendary character against each other in an all out brawl. Or maybe you think of Kirby, the pink, spherical creature that went from a kid-friendly mascot platformer to one of gaming’s most endearing franchises. Of all of HAL’s many titles however, there’s a pretty decent chance Day Dreamin’ Davey won’t enter anyone’s mind.

To be fair, Day Dreamin’ Davy isn’t a HAL Laboratory game, at least not technically. The game was published by HAL America, an American publishing branch that’s job was to bring HAL’s original titles to the US, including Adventures of Lolo and ports of classic Midway arcade games like Joust. There were however, a couple of games that HAL America brought to store shelves that had been developed by a separate developer, and Day Dreamin’ Davey, released in 1992 and one of the last game’s published by HAL America, was one such title. It was developed by Sculptured Software, a rather busy studio that had released multiple games a year every year from 1985 to 1995 before they were absorbed into Acclaim in 1995. In 1992 alone they had released a whopping sixteen titles, including the popular Super Star Wars for the SNES. With that many releases at once, it’s clear they couldn’t all be winners. Much of Sculptured Software’s library include bland licensed work such as digital versions of popular board games and minor sports games, but even as one of the few original titles, Day Dreamin’ Davey is a particular blemish on the company’s record.

That’s not to say Day Dreamin’ Davey was some throwaway title made as a quick cash-in. On the contrary, the game has a rather high concept story and ambitious structure. The game follows the titular Davey, a young kid whose active imagination and lack of any kind of attention span makes him a danger to himself and others. Over the course of a school day, Davey drifts in and out of consciousness, landing in any one of four different dream worlds at the slightest provocation. It starts innocently enough, with the school bully stealing Davey’s pencil mentally sends him into a medieval fantasy world where he’s a knight on a journey to retrieve a magic lance, but the situations that trigger dream sequences quickly become increasingly more ridiculous, from his teacher saying ‘draw’ in art class creating an Old West scenario where Davey is the town’s lone sheriff, to adventuring as a hero of Greek myth when his principal starts lecturing about when he was Davey’s age.

Those are the only three level types, with Davey switching between the different fantasy worlds at different points in the story, usually picking up where he left off the last time he was at that world with a new objective, and despite the radically different genres, none of the three really play all that different from each other. Viewed top-down ala’ The Legend of Zelda, Davey has two types of weapons; consumables such as throwing objects or magic fireballs in the Medieval levels, and main weapons such as swords, bows or guns, mapped to the B and A buttons respectively. Each level is generally some sort of maze, with Davey tasked with collecting some kind of macguffin which will end the level, or bringing it to a certain area where he’ll fight a boss before coming back to reality (and usually realizing he’s caused physical harm to a fellow schoolmate in reality). The only real variety to the gameplay is seen in the old west stages, which features a much larger variety of items and ammo types, a store where items can be bought and sold, and a Zapper compatible minigame where Davey has to shoot a gun out of an outlaw’s hand.

While Day Dreamin’ Davey is certainly a weird game worth talking about, it’s unfortunately a barely functional one with some baffling design choices. Various NPCs will give Davey hints and drop items, but there’s no dedicated talk button. Instead you approach them and are whisked to a separate first person conversation screen where the NPC gives you a first Legend of Zelda style hint. To get their item drop you have to run into the NPC after having spoken to them, which makes the NPC disappear with the same sound effect that plays when Davey is hit by an enemy and causes him to flash, as if you had been attacked. This can be seriously confusing the first couple of times, and can become disastrous if you mistakenly attack the NPC, causing them to turn into an enemy.

On that note, combat, movement, really every action in the game is executed in a very haphazard way. Most melee weapons work much like The Legend of Zelda with a straight out stabbing motion, but hit detection is clumsy at best and the feedback is nearly non-existent. Enemies and Davey don’t have any kind of invincibility frames or knockback, so melee combat mostly consists of two characters running into each others’ weapons until someone dies. If you do manage to come out on top of a battle, healing is handled in an odd and unintuitive way. You can carry multiple healing items, but all of them must be used at once until your health is full or you run out, so you’re out of luck if you want to try and conserve much needed healing for later. Although there’s no platforming for say, Davey occasionally does need to jump over obstacles in his way, which is done Double Dragon style by pressing the A and B buttons together. Unfortunately, Jumping doesn’t cancel out either button’s normal action, causing you to either attack or worse, use one of your consumable ranged weapons which can be required to kill certain enemies. All of the mechanics and general design either feels poorly thought out in this way, or at best rushed out the door. Case in point, the constant reusing of not just art assets, but entire levels as well (including a short stint to the Hades level of the Greek myth portion of the game… in the final Old West segment) suggests a game with an extremely tight development cycle.

To its credit, Day Dreamin’ Davey sounds good on paper; an imaginative high concept that allows for a variety of level settings and game mechanics. In that light, it doesn’t seem all that odd that HAL would take a chance on the game based solely on the idea. The execution however is slapdash and sloppy, and that’s a real shame. It almost feels mean to pick on the game, because it seems like the kind of work that was someone’s baby; a passion project that got torn asunder by the realities of game development. As it stands today, Day Dreamin’ Davey is an interesting curiosity in HAL’s library of games certainly worth mentioning, but actually playing it? Better to sleep on this one.

Adventures of Gilligan’s Island, The