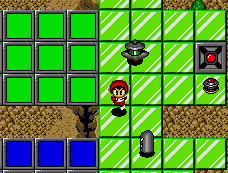 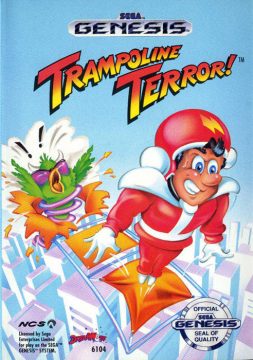 Trampoline Terror! is a somewhat unusual game developed by Masaya, who are also mostly known for making unusual games. It was only released in North America, though a Japanese version was planned under the title “Explode Star”.

Although this is never stated in the game except for a few images at the end, apparently aliens are trying to take over the planet of Ahas, and have kidnapped the queen of that planet. It is up to the player, a humanoid gymnast with a red and white jumpsuit and helmet, to stop them. 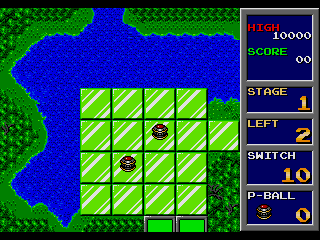 The player can jump with the A or C buttons. The levels consist of a 16 x 16 grid containing various types of tiles. Besides normal tiles, there are also bomb tiles. To advance to the next level, the player must walk over all of these bomb tiles, which cause them to explode and the player to fly off to the next level. However, the player must not stand on these bomb tiles, or else they will lose a life. Various enemies throughout the levels can impede the player’s progress. The player can pick up powerballs or “P-balls”, which look more like pinball bumpers, and toss them at the enemies with the B button. The player can then pick these powerballs back up if they are still on the ground. Enemies can also be destroyed by getting them to walk onto a bomb tile as it is about to explode.

There are 33 levels total, with eight worlds consisting of four levels each, plus a final boss fight. The first eight levels were probably intended to be some sort of tutorial level, but in the end just feel sorta lackluster. The player can get through the first seven entirely without jumping, and the eighth level mostly consists of diagonally aligned tiles and can be very frustrating in a lot of ways. These first few levels can give a negative impression on one that’s new to the game. However, from the ninth level onward, the puzzles become more challenging and overall more fun, even if it can be over in less than an hour. 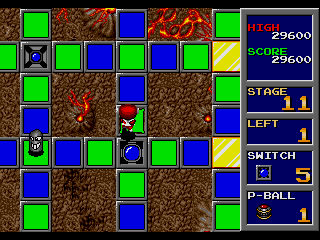 The presentation isn’t too remarkable, but it gets the job done for what it is. There is some cool parallax scrolling in some levels, though the lower layers move a bit too much and could have their speed turned down. A password or save system would be nice, or a stopwatch so players can see how fast they can complete a level. While Trampoline Terror! is by no means a bad game, it feels lacking or rushed in some areas. However, if the player is willing to accept these faults, it can be an enjoyable action puzzle experience.