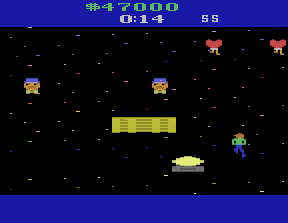 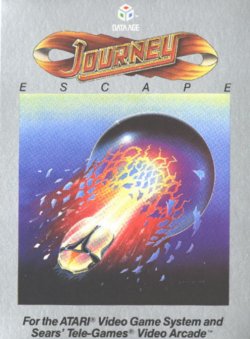 In 1973, former Santana manager Herbie Herbert created a backup group for established artists in the Bay Area of California. Including such Santana Alumni as Neal Schon on lead guitar and Ross Valory on bass, the group eventually became a progressive rock jazz fusion outfit known as Journey. However, it was not until late 1977 when a man known as Steve Perry decided to join the band as their new lead vocalist. From there, they took off like the space vehicles on their album covers, releasing hit after hit and a zenith with the albums of E5C4P3 and Frontiers. Like many pop culture icons during the early 1980s, video games were inevitable, and two games – an Atari 2600 game and an arcade game – were made based on the band that never stopped believing.

Journey Escape opens with a nice title screen of space before the scarab spaceship passes through blasting lasers while the opening riff to “Don’t Stop Believin'” plays. Once the game is started, the player takes command of the five then-members of Journey. Even though there is only one sprite for the player character, the current band member’s initials are at the top of the screen. 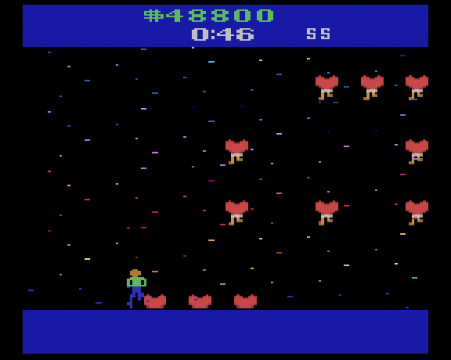 The game itself is basically an avalanche-type game, where the player moves up the screen while dodging obstacles coming from the bottom screen. Such obstacles include Love-Crazed Groupies (represented by hearts on legs), Shifty-Eyed Promoters (represented as heads with hats), Sneaky Photographers (which look like eggs with a swivel chair leg), and Stage Barriers (which are basically giant yellow walls). The player starts with a budget of $50000, and every time he tries to run into something he is supposed to dodge, he loses some of his money ($300 for the groupies, $2,000 for the promoters, and $600 for the photographers). There is also a time limit of one minute for each of the stages, and while the obstacles do not necessarily kill the player, they do slow him down and make the journey more difficult. However, the player can get some help by running into a Loyal Roadie (which looks like a robot) for temporary invincibility, or the Mighty Manager (represented by a giant smiley face with a hat and legs) to get invincibility for the rest of the stage and a bonus of $9,900. The player must get the band members of Journey to their Scarab space ship at the end of the stage.

Even though a lot of the game may sound alright on paper or even in video, it does not necessarily work in practice. The game has the bad combination of having levels with 100% complete randomization. In any avalanche-type game, this is not necessarily a good combination as not being able to memorize levels or at least having certain presets can lead to some levels being unbeatable. It would be better to either have the levels to be preset or for the game to be infinite. The graphics are simplistic, but passable, but the music can get grating at times, and the novelty of hearing the opening riff of “Don’t Stop Believin'” on the Atari 2600 wears off after the umpteenth time. When the player gets stuck, the Atari’s infamous collision detection makes it very annoying to get unstuck. 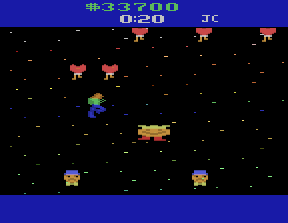 Overall, the game is forgettable except for the fact that it’s based on a rock band. If the famous riff and graphics of the Scarab were taken out, this could be just another bottom-of-the-barrel Atari game.