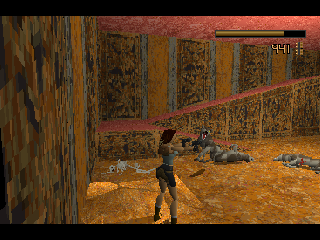 Tomb Raider is one of the most well-known franchises in all of video gaming. Beginning in 1996, it was not only one of the first stellar 3D action games, but it also starred a charming leading lady in the form of Lara Croft. The franchise was created by British developer Core Design, previously known for platformers like Chuck Rock and Wonder Dog, who in the mid-to-late ’90s were on top of the world thanks to their creation. Under their stewardship, the series spawned five direct sequels, two Game Boy Color games and an N-Gage port of the original game. Lara herself appeared on the cover of non-gaming magazines and starring in commercials for various products, as well as two successful films starring Angelina Jolie. 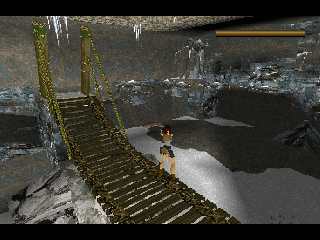 The original Tomb Raider is a third person 3D action adventure platformer originally released for the Sega Saturn, Sony PlayStation and DOS in 1996. Apart from its heroine, the game is notable for its cinematic and atmospheric level design and gameplay. The game was a massive leap forwards in gaming technology and allowed the player to explore large detailed 3D environments in search of lost artifacts, all while solving puzzles and avoiding death traps. Lara also has an expansive move set and small arsenal to help her navigate these dangerous environments. She can run and jump vast distances, vault, grab ledges, backflip while using firearms, swim and hold her breath underwater for long periods of time.

To maximize the use of Lara’s move set effectively, the developers based all of the game environments on a 3D grid system. This was from before the era of analog controllers, so it made some kind of sense at the time. This allows the player to use the grids to learn and judge the distance of a far away ledge before taking a jump. Functionally, it’s similar to how movement works in the original Prince of Persia games. This should, in theory, lead to Lara fluidly moving around each level, negotiating her dangerous surroundings with ease and finesse. Unfortunately in practice this feels pretty rough, particularly due to the tank controls for turning movement. It’s functional for leisurely exploration but is restrictive and frustrating when dealing with one of the game’s many death traps. It was frustrating at the time but for a modern player, it will probably feel absolutely archaic.

The game also uses a “Save Crystal” system, where there are floating crystals at certain points during the level that act as single-use checkpoint. This is a very frustrating system, as the crystals are few and spread out far between each other, so given the trial-and-error nature of the platforming, the player will probably have to replay large chunks of the level over and over. There are also secrets to be found, accompanied with a distinctive chime sound effect. The secrets reward exploration with extra medipacks, ammunition, and even new weapons to add to Lara’s arsenal.

The music was provided by in-house composer Nathan McCree, and apart from the main theme and cutscenes, is only used incidentally at certain points to certain points to enhance the cinematic feel, which it does with great effect. The remainder of the music in levels is ambient, which helps craft the abandoned and desolate atmosphere that comes with tomb raiding. McCree would continue to score the next two entries in the series. 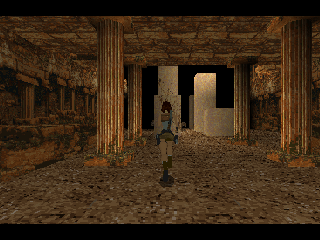 The game’s story begins in 1996 India. Professional archaeologist Lara Croft is relaxing in a hotel lobby after returning from an expedition to find Bigfoot. She is approached and hired by a Texan called Larson, on the behalf of Natla Technologies owner Jacqueline Natla, to find a piece of an ancient artifact called the Scion. The scene then cuts to Lara climbing mountains of Peru with a local guide and locating the entrance to the tomb of Qualopec, where this artifact supposedly lies. When the large stone doors of the tomb open, bloodthirsty wolves rush out, ripping Lara’s poor guide apart before she can spring into action and gun them down. With her companion dead, Lara enters the tomb alone, only for the large stone doors to close suddenly behind her.

Lara’s quest leads her all around the globe, to a lost underground city in Peru, an underground colosseum in Greece, inside a pyramid in Egypt, an abandoned mining complex on an Mediterranean island, and the lost city of Atlantis. Despite being developed in the early days of 3D gaming, the environments still somehow capture the atmosphere of ancient and forgotten places. In each locale, Lara will encounter death traps such as spike pits, large boulders, darts, lava pits and large drops. The deaths can be quite brutal and sudden, with the appropriate bone cracking sound effect really selling it, but there are some amusing ones. For example, Lara climbing onto the hand of a King Midas statue, only for herself to be turned to gold.

The enemies Lara faces are mostly the local wildlife: wolves, panthers, bats, rats, and so forth, but these mundane enemies are broken up with run-ins with vicious gorillas, velociraptors, genetic abominations, and the iconic encounter with a T-Rex. Towards the end of the game Lara will also encounter some “wacky” hitmen: a skater boy armed with Uzis, a cowboy with a six-shooters, and a bald man with a shotgun. These hitman characters highlight a tongue-in-cheek element that the series does lose going forward, but the fantastical and supernatural elements which the series continues to explore are front and center. 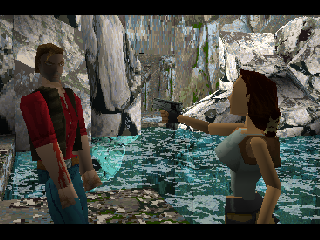 Savvy marketers at either Eidos Lara’s sex appeal and made her the main face of Tomb Raider‘s marketing blitz. They added the “Featuring Lara Croft” tagline to the cover to give her the allure of a movie star. This approach really upset Lara’s creator Toby Gard, who felt the over sexualization of the marketing ran counter to the personality of Lara. Nevertheless, whether it be through the advertising or from the raving reviews from the gaming press, Tomb Raider become one of the best selling games of the 1996 Christmas season, and Lara herself reached the high of pop culture stardom that few video game characters have come close to since. Lara would go on to be featured in commercials for Lucozade energy drink, SEAT cars, and was even involved in the projections of U2’s live shows on the POP Mart tour. 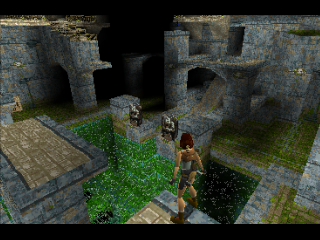 Tomb Raider was originally released for the PlayStation, Saturn and DOS. The PlayStation version running at slight a quicker frame rate than the Saturn, giving it a smoother feel, though the Saturn version is clear of the polygon warping that affected most 3D PS1 titles. The DOS port is the best graphically looking and is the easier of the two other versions as it removes the save crystal in favor of a quick save option. Also missing is Nathan McCree’s incidental music, but it does use the main theme on the title screen. 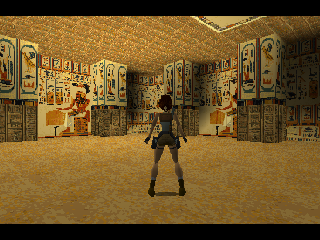 A month after the release of Tomb Raider III in 1998, Eidos re-released the game on DOS, Microsoft Windows and Apple Macintosh with four bonus levels called Tomb Raider Gold. The expansion was developed by Eidos San Francisco and is basically identical to the original DOS version, however, it can run at higher resolutions with then-modern graphic card support, though none of the engine or gameplay enhancements of the two sequels were implemented. The four bonus levels are split into two sets. The first set has Lara revisiting the Egyptian levels from the original a few months after the main games story has concluded. However, this time around, the levels have flooded, opening up new areas for the players to explore. The second set of levels take place directly after the story has finished and has Lara exploring the rest of Atlantis.

In 2013, Canadian based Realtech VR released the iOS port with an Android port following in 2015. They are both basically ports of the Windows Tomb Raider Gold (including the four bonus levels) with a higher resolution, 60 FPS frame rate, larger HUD elements and widescreen as standard. Still, like most touchscreen controls, they are atrocious and unresponsive, making the game borderline unplayable unless a Bluetooth controller is used. In 2018, Realtech ran into licensing issues with the current license holders Square Enix, so the game was delisted off both the App Store and Google Play the same year. 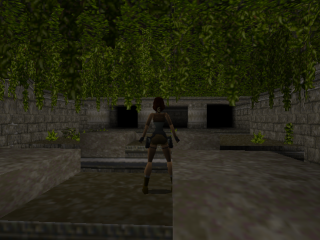 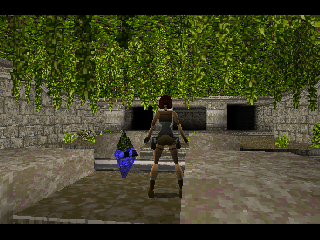 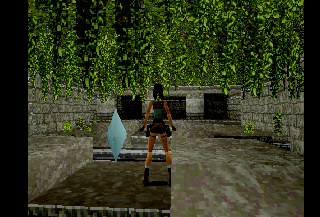 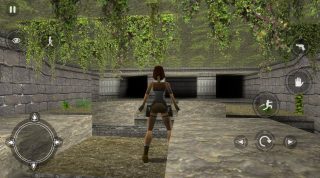 EuroGamer, Wesley Yin-Poole, 20 years on, The Tomb Raider Story Told By the People Who Were There https://www.eurogamer.net/articles/2016-10-27-20-years-on-the-tomb-raider-story-told-by-the-people-who-were-there