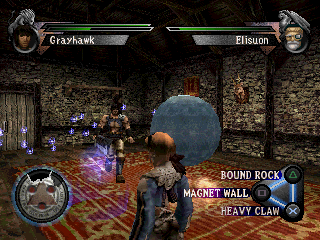 The next game in the Deception series came out in the US a year later, in addition to receiving a UK release not long after. The third Deception game doesn’t reinvent the wheel as much as Deception II did. It just polishes it, which is hardly a bad thing. As a result, Deception III is one of the stronger games in the series.

The protagonist of Deception III gets caught up in the forthcoming mass murder and mayhem pretty much by accident. Orphaned at a young age, Reina is adopted by a woman named Rosetta, and taken to live in the kingdom of Burganfada. (This may not be the actual name, as the localization is far from professional.) Shortly after her 17th birthday, Reina’s family is kidnapped by the king of Alendra Kingdom, who has a grudge against the Burganfadans, and frequently has them kidnapped to be used as slave labor. Then Reina’s family is killed, and she’s thrown in jail to be used as slave labor. Shortly thereafter a mysterious benefactor gives Reina a glowing red stone which she can use to create traps and kill people.

The main character. Spends her time whining about not wanting to kill anyone, even though she eventually racks up a body count high enough to make Kratos blush. She is also called “Layna” on the American packaging.

A knight who decides to assist Reina out of the kindness of his own heart. Or does he?

An assassin who works for the king and helps kill Reina’s family. He’ll get his eventually.

A royal scumbag who enjoys murdering innocents and enslaving girls. Intent on destroying Burganfada for some reason. He took over Alendra Kingdom after his predecessor, King Arcadia, perished, which ended the strenuous peace between Burganfada and Alendra.

Another sovereign. Not quite as evil as Frederick, but pretty high on the list. She’s after Reina and her necklace.

An espionage agent working under the queen. She is loyal and accomplished, yet seems to know more than she lets on. 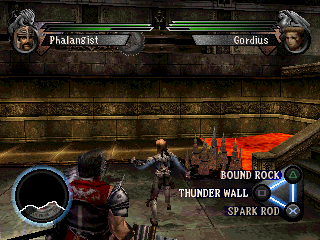 The story is hardly classic literature, but it’s good (and amusing) enough to keep the player interested. Besides, it’s all about the innumerable ways to sadistically take out Reina’s assailants, and Deception III has plenty to offer there. Really, the only character that matters in Deception III is Reina. 95% of everyone else you meet, you’ll be killing. Before each mission, there’s the usual bios of Reina’s adversaries and who she’ll be killing. Unlike the main character in the first Deception and Millennia from Kagero: Deception II, Reina mostly kills for self-defense, not because a malevolent force insists on it. Though she’ll be doing lots of killing, all the same.

The interface and basic gameplay is almost exactly the same as Kagero‘s. Deception III has a few graphical touchups to give it a better presentation, and there’s the expected new environments and traps. After clearing missions, the player earns both “Ark” and “Dreak” with which to purchase new traps and modify existing ones. Ark are gathered from fallen victims, and Dreak is accumulated at the end of each mission based on how efficient at killing the player was.

The biggest addition to Deception III is the ability to make your own traps. You can take a trap, give an attribute with an Emblem, modify some of its capabilities with a Ring, and increase their power with Orbs. Many of these items are found by beating different scenarios. You can, for example, combine a Thunder Emblem with a Rock trap to create the Volt Rock. There are a few silly special traps, like a banana peel and a barracuda that drops from the ceiling. Furthermore, many of the rooms in the castles already have traps pre-installed, which Reina can also use, usually by running up and hitting a switch. It’s quite fun sticking foes in an iron maiden and listening to their cries of agony. As usual, there are multiple endings. Based on who Reina lets live and who she kills, the game can end in one of several ways, though none of the endings are exactly cheerful. 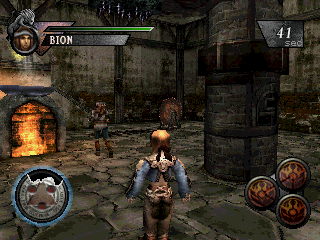 There are a couple of additional modes, too. Particularly useful is the Trap License mode, which lets you practice how to use various traps under different circumstances. These are pre-designed scenarios and thus you can’t set your own traps. There’s also an Expert Mode, which is basically an assortment of puzzles and challenges, requiring the player to kill enemies within a limited amount of time and trap usages.

Although not as well known as Kagero, Deception III is still a fine entry in the series, carrying on with the creepy atmosphere, excellent graphics and dark, moody music.