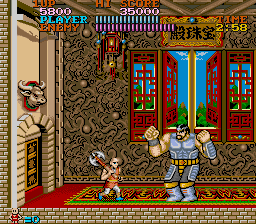 Released in 1987, Capcom’s Tiger Road puts you in the garb of warrior monk Lee Wong on a mission to rescue kidnapped children from the evil emperor Ryuken. Each of the game’s five levels takes place in a fortress helmed by a named boss, with design and architecture modeled after Chinese fantasy.

Lee’s main weapon is an axe, which is tossed around like a short-range boomerang. Other weapons include a spear, which has a shorter range but is quicker, and a spiked ball, which has longer range but is slower. All can be strengthened by grabbing the Pow icon seen in other Capcom games. Power-ups are obtained by breaking golden statutes, which reveal other items that can kill all the enemies on the screen, stop time, or increase your life meter. 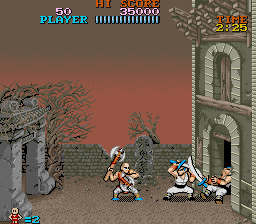 Capcom was at the forefront of action-platformers with Ghosts ‘n Goblins, released in the arcades two years prior in 1985. Like that game, Tiger Road was directed by Tokuro Fujiwara, and shows a marked evolution of the type of arcade games being made around this time. Like Trojan, released the prior year, many areas are long stretches where enemies appear from both sides of the screen, similar to Irem’s Kung Fu Master. While those mooks were easily disposed of, the foes in Tiger Road are much smarter, often keeping just out of weapon range or leaping in for an aerial attack.

But Tiger Road is also aware of how these long stretches of enemy onslaughts can become repetitive, and so it mixes up the levels with many more challenges. Some areas require that you vertically scale a tower, either by running up and down stairs or by using Lee’s incrediblE jumping powers. Many are filled with enemies that only appear in a given area, like the hulking muscle men in the first stage that can lift Lee with both hands and then chuck him into the ground, or the ninjas that ride on kites as you scale a waterfall. In a few sections (including one boss battle), Lee dons a floating cape to fly around the area, dodging obstacles like spiked vines and enormous snakes, while fighting against other enemies. 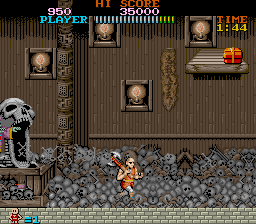 Along with this, the levels constantly throw unique challenges at the player. In the first stage, you come across a collapsing bridge, where you need to quickly jump up on the falling platforms to prevent being skewered on the spikes below. There’s a room filled with bones and skulls that can suck Lee into their mouths, causing instant death, and another where you need to quickly bash a crystal to open a door before a spiked ceiling crushes you. There’s a real sense of presence to these levels, that you’re progressing through a tower filled with tricks, traps, and other challenges. You can even accidentally find yourself tossed back to previous parts of the stage, if you’re not careful!

Between stages are training missions, where you need to complete some task – finish an obstacle course, fend off bad guys, or snuff out a candle using your weapon – to receive an upgrade. These trials technically aren’t all that difficult, but they are unforgiving, as a single screw-up will cause you to fail the whole thing, and there’s no way to try then. Some upgrades include expanded health, but the most important is learning the Tiger Kidou (“Tiger Way”) move, which is a powerful projectile weapon used when your health is at maximum. 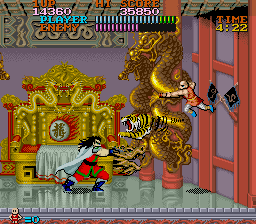 You’re going to want to complete as many training missions as possible. Tiger Road is quite difficult, given the regular onslaught of enemies and traps that can kill you quickly. Some enemies also take multiple hits to kill, and you can quickly become overwhelmed if you don’t proceed carefully. But it’s also a little more forgiving than Ghosts ‘n Goblins or Black Tiger, largely because you have a life meter, and checkpoints are regularly placed.

Each stage has both a mid-boss and a regular boss, each preceded with dialogue that probably sounded cool in Japanese but was goofily translated into English. If the arcade board difficulty is set to easy, some of these can be beaten just by mashing the buttons, but their large health bars on the higher levels require quite a bit more strategy. Some of the standouts include an enormous walking golden statue, as well as the monkey king himself, Gokuu. Amusingly, one of these is translated as “Broth”, but given that they’re two swordwielders, it was probably meant to be “Bros.”, as in “Brothers”. 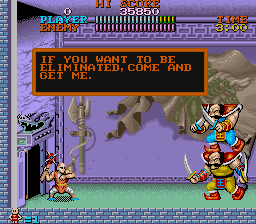 The visuals are richly detailed, particularly the backgrounds, which give every room a sense of both presence and purpose. As far as heroes go, Lee Wong is a bit generic, lacking the unique designs of some of Capcom’s other heroes; there’s a reason he’s never really popped up in any crossover games. The FM soundtrack is reminiscent of other pre-CPS games, composed by Keiyo Kawamoto and Harumi Fujita. The opening level theme has a sense of heroic dignity, but it’s the later level themes that are the standouts, with upbeat tracks that don’t necessarily fit the game’s Asian vibe but sure are bangers. The Japanese arcade board used Z80 and MSM5205 chips to allow for digitized samples, mostly used for Japanese exclamations as well as yells when attacking or taking damage. The overseas board removes these chips, so the voices are all gone. The overseas board also lets you pick which stage you’d like to start at.

The European computer versions come from Probe and US Gold. The Amiga and Atari ST versions are similar, displayed in a framed window with drastically simplified graphics, slower gameplay, and no music outside of the title screen. It cuts out much of the game, consisting of most of the first two stages before fast-forwarding to the final battle. Despite the cuts, it’s not a terrible port, but it could’ve been so much better, particularly the Amiga version. The IBM PC version is based on this but suffers from worse coloring and choppier scrolling. 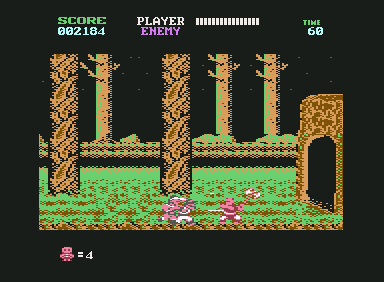 The Commodore 64 version has drastically simplified level design and repeated bosses, though it contains much more of the game than the other computer ports. It also runs faster and plays better, despite the downgraded graphics. This version also promises a sequel in the ending, which never materialized. The Amstrad CPC and ZX Spectrum ports are similar, using a zoomed-in view, with the CPC having chunky, colorful sprites and the ZX having monochromatic ones. The action is also choppy and only contains the first level. None of the computer ports have the training sections. 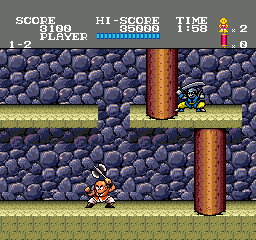 The TurboGrafx-16 port from Advance Communication and Victor Music is nearly an entirely new game. The visuals have been redesigned to be more colorful, with smaller and cutesier sprites, with Lee Wong now having enormous eyes that take up most of his head. Despite the brighter color palette, it still maintains a similar darkly atmospheric vibe as the original. These aesthetic changes aren’t necessarily better or worse, but the decreased background detail does make the stages feel noticeably less rich than the arcade game. The level designs themselves are also almost completely different, though some areas are reminiscent of the original. The final level is much longer than in the arcade game. The first boss has changed from the hulking giant Fudou to the half-fish Gyojin, but most are the same. The soundtrack is also totally different, though sadly it’s not as memorable. It plays well, though, and the difficulty level is adjusted to be more appropriate for home play, even letting you save and resume progress.

Tiger Road is a relative obscurity among Capcom’s library, perhaps because it never received any Nintendo ports, and didn’t receive any sequels. Nonetheless, it should be regarded as a minor classic, with some excellent level design, elaborate background visuals, and excellent music.

Arcade emulations can be found on Capcom Classics Collection Vol. 2 for the PlayStation 2 and Xbox (but is missing from the PSP releases) as well as on Capcom Arcade Stadium 2 for PS4, Xbox One, Switch and Windows. 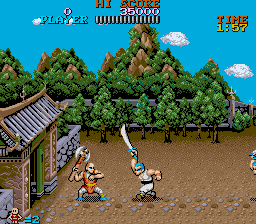 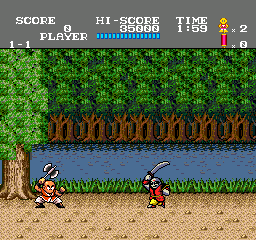 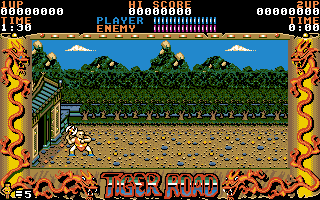 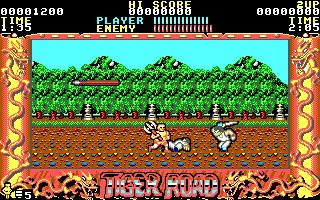 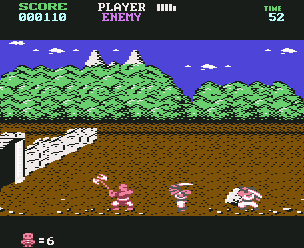 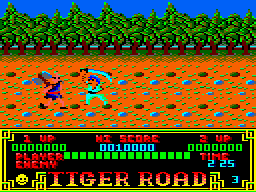 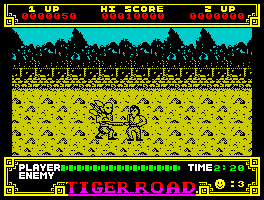