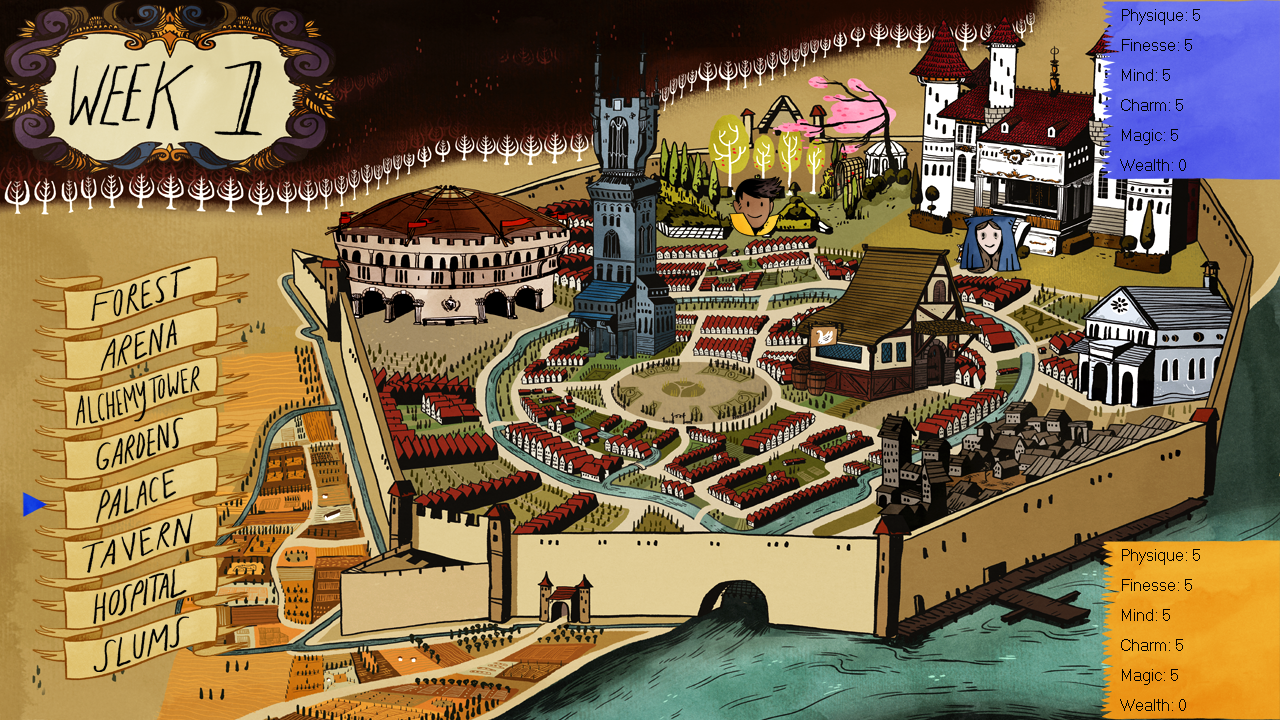 The rise of the indie scene has also seen a return of the choose your own adventure format. There are tons of games popping up based around stat changes and simple choices, and they start to blend together after awhile. The Yawhg tries to differentiate itself with the fast game time and the addition of a multiplayer element, and it works really, really well. On top of that, it has a lovely tone that perfectly mixes melancholy, excitement, and despair, making every game a little adventure of its own.

You start every game selecting from four different characters (who are a pretty diverse bunch, much appreciated), then take turns with others at the keyboard selecting what you’ll do each turn, called a week here. Every character has a set of stats (Physique, Fitness, Mind, Charm, Magic, Wealth) and six weeks to build them up at a set amount of locations on the map. After week six, the titular Yawhg strikes off screen, and the town you inhabit is decimated. From there, every player selects a role to play in rebuilding the town, and their success in that role depends on the stats they’ve built up. Once that is done, you see if your attempts at rebuilding are successful, and the ending for each singular character, which are based on their actions and not just stats. If you did well, happy times all around. If you didn’t, you get to hear about how everyone slowly died. Wee!

It’s entirely possible to play the game alone while controlling multiple characters too. That’s actually pretty fun, as you have to prioritize who does what every week because an area is unusable for that week if another character is using it. Shaking things up are random events at every area, which can grant stat bonuses or losses, but also trigger special events that can even lead to an area being destroyed for the rest of the game. Not everything goes absolutely perfect, and if your initial plan is ruined, you have to re-prioritize. In one example, a mind focused character ended up getting a magic curse that destroyed their mind, but gave them a huge magic boost, so a change to a magic focus ended up paying off.

The game is a fun little thing alone, but it’s best experienced with friends in person or on video call. It’s a multiplayer game that encourages both competition and teamwork at the same time, balancing group success and individual success carefully. It can be quite the time and a fun exercise in teamwork. It’s an overall very short experience, but the charming art style and moody music really make it work, as do the text blocks between weeks. It’s a game with atmosphere and style, worth it if you intend on playing regularly with friends.