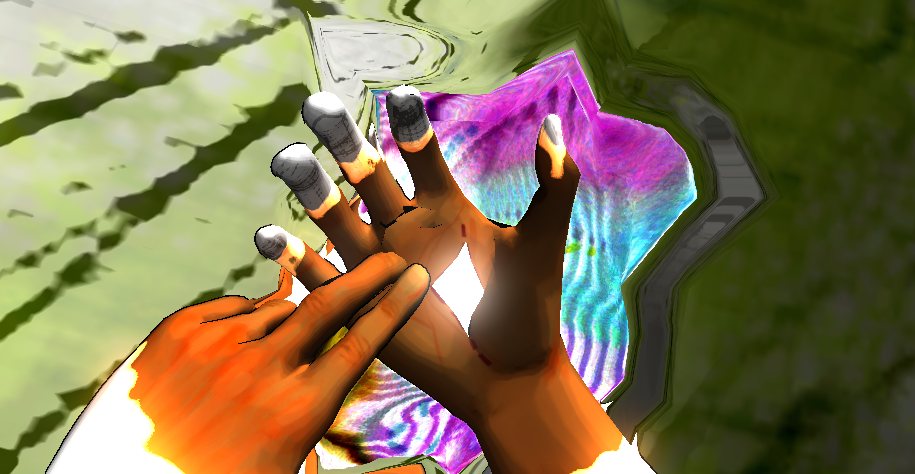 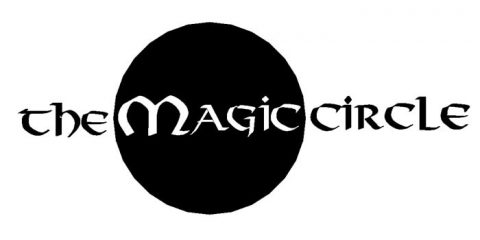 You boot up the game. Someone is talking about a cold opening of a ring spinning in the void, nobody knowing if it will stay up or fall down. A woman cuts in, and the two voices bicker a little. Eventually, the game starts proper, as you’re transported to a hut in a fantasy village burning down. There’s no color beyond black and whites, and the people in this village seem …unfinished. They’re basic models with checkered patterns, with no complicated features. One a crude text box calls your mother gives you a sword …and the world freezes. The voice who spoke of the ring returns as a giant floating blue eye named “Ish,” and the woman a red eye named Maze.

The two suddenly start arguing about what’s more important for a game, player freedom or narrative structure. They both clearly hate each other and have had this argument countless times before. Ish calls the player “Dr. Jekyll and Mr. Genocide.” 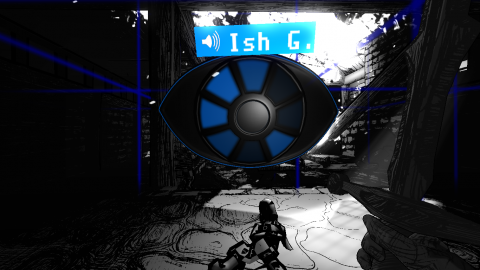 “What possible story could survive these conditions!?”

The two guide you along from here, you realize the game you’re playing is barely in alpha stages. It’s nowhere near finished, massive swaths non-existent. The cutscenes are bugged, and you see the planned ending from another planning discussion. View credits (mostly giving credit to Ish), then kick back to menu …where two square eyes stare at you from inside the logo’s circle, calling the game you just played a joke. And then it says it needs you to finish it.

You select the new option “Pro Mode.” Suddenly, you can more around the menu like it was part of the game world. You move forward. The letters break apart as you enter the void.

You then enter The Magic Circle, in more ways than one. 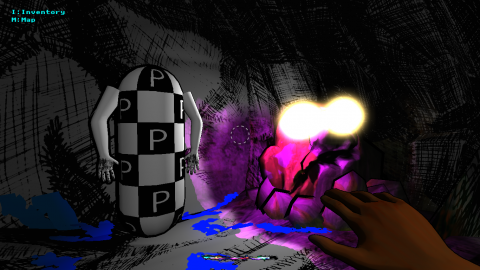 Created by a small group of former Shock series and Dishonored devs, The Magic Circle is yet another game about games, but it comes from experienced developers instead of outsiders or indie devs this time. It’s less interested in targeting popular games and more in creators. The three main human characters all represent different cultures and even actual people. Director Ish is an obvious parody of Richard “Lord British” Garriott of Ultima fame, the champion of the thematic narrative. Maze is a pro gamer who believes in the power of systems and skill, even giving a lecture on her frustration with story robbing a game of its mechanical dance. Coda, the game’s true antagonist, represents the fan, someone who obsesses over the work so much that she wishes to recreate and perfect the existing work than allow the creator put their own soul in the project and change it into something else. All three have their own interesting perspective you come to understand fully, but you also see firsthand what happens when these three necessary views are unable to find common ground. 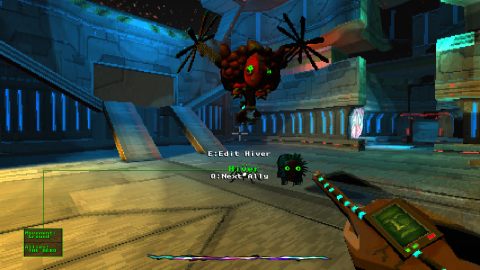 The creation of the game inside the game is a complete mess, with an entire System Shock style version of it buried deep that never saw the light of day because of Ish’s real life frustrations and clashing between him and Maze on what was more important to finish the project. When Pro, the hero of the space game now locked away, calls the world a joke, he isn’t kidding. He desperately wants somebody, anybody, to finish the game, because the current “gods” (whom he also calls “Sky Bastards” for their in-game avatars) surely never will. To that end, what he wants you to do is rip the game apart from the roots. He wants you to bring down the sky and see what’s hidden behind it, to destroy this unfinished eyesore and see what makes it tick. 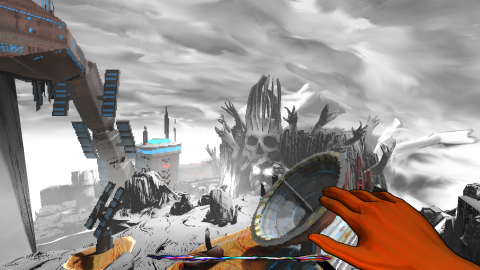 Thus, the mechanics of The Magic Circle are based around manipulating the world itself. You have no combat ability due to Ish’s desire to remove combat, but Pro introduces you to tears that give you life. Using that life, you can trap creatures and objects, then edit their behaviors, changing what they see as allies and enemies, how they attack, how they move, and even give them special abilities. As you trap more creatures, you can loot them for these behaviors and splice them onto other creatures, completely changing how they function. You can also gain the ability to command them with Pro’s arm, creating way points they follow for the sake of solving puzzles and commanding an army. You can also pour life into “ghosted” (aka dumbed out) parts of the world to bring them back to the physical realm. You yourself can even ghost upon losing all your life, letting you interact with ghost objects and ignore hazards like lava.

The game is all about solving puzzles by questioning the very rules of the game, meaning there are dozens of possible solutions to most every problem. For example, there’s an overpowered monster called the Hiver Queen you can kill by gathering a ton of monsters and giving them fire attacks, or you can find a creature with the mind swap power, toss it at the queen, and watch as it one-shots the beast and gives it new properties, allowing you to swipe the queen’s hive mind ability from the corpse of the mind swap initiator. There’s also plenty of secrets to be found, including developer commentary and recorded conversations, patch notes, and more by going to places the game doesn’t want you to go to. 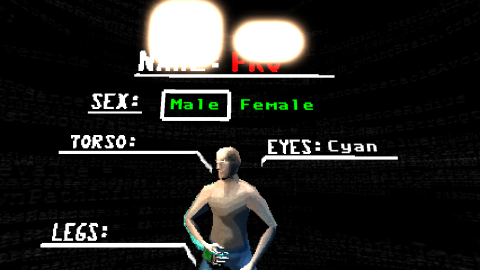 This can result in some real hilarity at times, as you can give anything you can trap whatever attribute you want. Helicopter turtles, rolling balls with sniper shots, dogs with tractor beams, the possibilities are near endless. There’s just something inherently fun about mixing alien sci-fi with traditional videogame fantasy. You would be amazed what ideas can work, and finding new abilities becomes the big motivator for exploration. At the same time, learning more about Ish and his team in those audio logs becomes even more interesting, as Ish and Maze prove to be surprisingly human and complex characters, even with their obvious archetypes. James Urbanick as Ish was absolutely perfect casting, as he goes full Dr. Venture and gives a haunting, tragic performance as a self-loathing man who wants to truly express something in his work, yet has come to hate his fans for their inability to try and understand him.

Karen Dyer’s Maze and Ashly Burch’s Coda are filled with life, but Stephen Russell of Thief fame as Pro steals the show when Ish isn’t around. His gravely, powerful voice makes every word he says carry incredible weight, really pushing the game’s themes and messages to the forefront in an effective way. It helps he gets one hell of a script, giving short speeches filled with frustration, spite, and righteous motivation that simply becomes infectious the more you hear from him. Everything he says is endlessly quotable, with strength in every syllable. 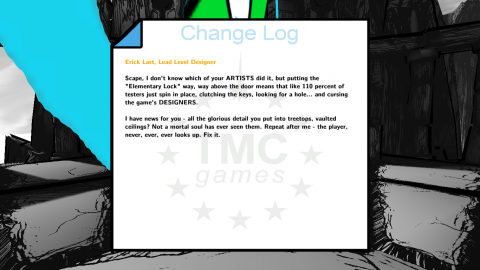 The world itself is one of the most interesting designs you’ll find in any game. It’s mostly a back and white world with minimal textures, like a sketch come to life. It manages to both portray an unfinished world and remain eye catching at the same time. The space game areas really contrast well, with far more polish and complexity, but also given outdated bit 3D from the 90s with a wide mix of colors that doesn’t mix with the more naturalistic fantasy world of the rest of the game. The creatures inside these areas are also modeled the same, so they never look at home next to the fantasy creatures. It’s a brilliant aesthetic decision backed well with the varied score, equal parts haunting System Shock and moving fantasy strings you’d expect from an Elder Scrolls game.

The part that really ties everything together are the code areas you find inside creatures and objects, along with the colorful tears in the world and ghosting effects. It exposes the artificial nature of the world and reminds you that it’s something to play and experiment with. This is also shown in Pro’s simplistic but powerful bit eyes, bright and mesmerizing. They’re clearly something fake, yet stunning to behold, inviting you to embrace this artificiality. It’s a striking, memorable image that becomes the game’s big thematic symbol, even more so than the circle in the logo you enter to truly begin the game. The fact that the eyes first appear in that circle is not insignificant, either. 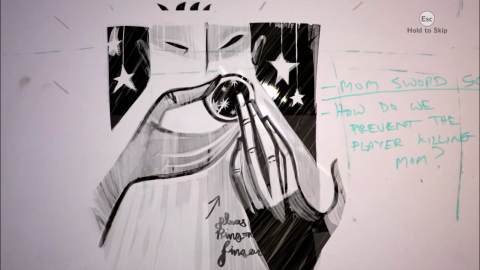 The game’s final portion is where it really comes together, as Pro reveals that he wanted you to destroy the game so you would understand how it works and build a finished version. You then have access to an editor, where you can create a small dungeon you can litter with enemies, loot, story, music cues, and other fun stuff, then watch Pro play through it and give his thoughts through a boredom meter and commentary, giving a final out of ten score upon finishing. This is where it becomes completely clear that this is a game made to show what it means to be a dev. It doesn’t go into complex coding stuff, but gives you a taste of the power of design, making you watch someone play your creation in ways you may not expect and learning how to craft an adventure the player will truly enjoy. It shows you mechanical pitfalls, showing the importance of variety and pacing, even if its attempt to show this is a bit crude at times. 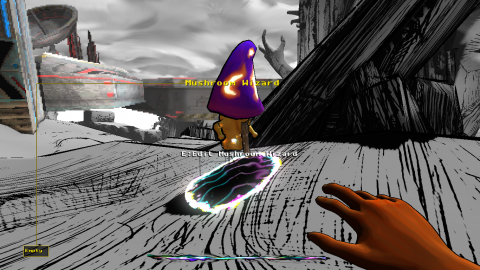 The end has Pro explain that what he really wants is something new. He gave you a taste of creating a world, on the off chance that you may continue to create new worlds in the future, to become a god yourself. The Magic Circle title is symbolic of Ish’s obsessions, but is a reference to a game design term that refers to the boundaries and makeup of a game, the wall between the game world and the real. When you enter the circle, the game gives you power to explore those boundaries and the artifice of the circle, and then challenges you to go further and learn more, to create something and put it out in the world. It’s a lofty ambition and it’s doubtful it succeeded at its goal, but it gives you a look into the world of game development no other game has ever shown. The Magic Circle doesn’t really pick a side in the conflict between the three developers (though it certainly doesn’t like Coda), but instead exposes you to these views and wants you to remember all of them. The Magic Circle understands that games are an art-form capable of incredible things, but it also knows that it needs new blood to make those things possible. Maybe you’ll be apart of that new blood one day. Maybe your vision can show someone else inside that magical circle as well.