It didn’t take long for SNK to pump out a sequel to The Last Blade. A year after the initial release, Bakumatsu Roman Daini Tobari (“Bakumatsu Roman The Second Act”) was shoved out into arcades and onto Neo Geo. The Last Blade 2 takes everything from the first game, throws in a few new characters, a new sword gauge mode, and refines everything to the point where the game couldn’t possibly get any better. 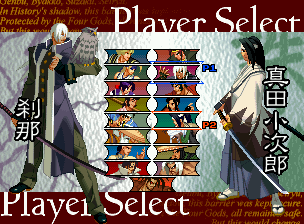 First, there three awesome new characters: Kojiroh, who plays like a non-charge version of Washizuka; Hibiki, a super-fast samurai lady with a concealed sword, a fan favorite; and Setsuna, who’s quite possibly the coolest fighting game character ever created, who plays somewhat like Kagami. Then you have EX Sword Gauge style, a special style that combines elements from Power and Speed, which allows for more balanced, less restrictive play. 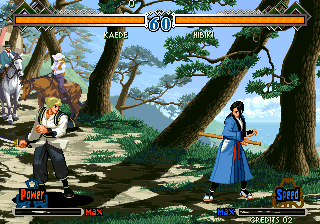 Not only is there a new Gauge style, but the older styles have been modified. With Power style, you can now super cancel your desperation move with certain special moves. With Speed style, the custom combo mode has been replaced with a long chain combo with specific inputs, similar to Geese’s Deadly Rave combo from the Fatal Fury and The King of Fighters games. Many of the characters have been given new moves, or have had some of their old moves modified, and others, like Kagami, have been totally tweaked. The controls and overall feel of the engine are even tighter than before, allowing for some of the most accurate play to be had with a fighter. 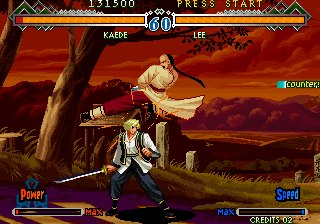 Although the stage count has been bumped down, the stages themselves are far more lively and detailed, and look better overall. Particularly of note is Moriya and Kagami’s stage, the aftermath of a navy battle near a beach, with rabid dogs eating rotten meat that’s washed ashore in supply barrels. One of the dogs runs away when you make too much of a ruckus during the duel. In another stage, a couple of guys try to tame a wild horse as an infant tackles his own epic task of crawling up a small staircase. Or take Fire at the Wadamaya, a burning building, complete with wavering heat haze effects. 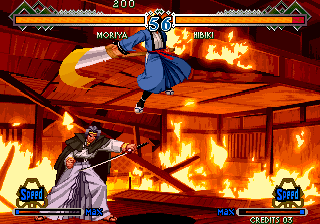 The animation is still fluid as ever, although the newer characters seem to outshine some of the older ones. Setsuna’s movements in particular are quite amazing. The sense of style has been amplified so much, you can almost smell it, for example when Setsuna’s pet owl swoops in to take his sword’s scabbard away, or how Kagami simply stands up and curses at you when he’s defeated, or how a stealthy turtle creeps onto a rock in the foreground as your battle rages on. The development team went out of its way to make every single second of this game absolutely cram packed with so many little details and nuances, and such colloquialism that it’s almost mind-boggling to take it all in. 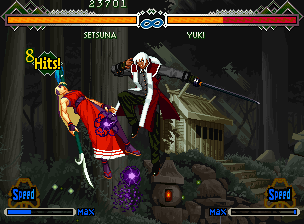 The soundtrack in The Last Blade 2 is even better than the first, and the first was nothing to shake a stick at. The composition of the synthed orchestra is a lot more “professional” sounding, and the quality brings it about as close to actual orchestral music as you can get on a cart-driven system. 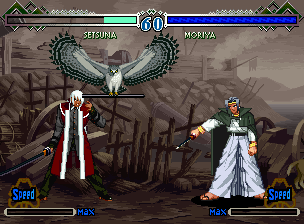 Like the first game, The Last Blade 2 was ported to Neo Geo CD. Not only is there an incredible arranged orchestral soundtrack, but the loading times are cut down dramatically compared to the first game, and there is no longer any loading in between rounds. The same music track keeps playing throughout the whole battle, never restarting abruptly after a victory. There are also some voiceovers for the more important cutscenes. 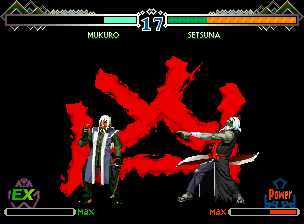 The Dreamcast port, sadly, isn’t quite what it should be. The music is from the cart version, not the Neo Geo CD version. The American version, like the arcade version, was censored heavily – instead of just removing the blood, the red spurts have been turned white, resulting in a silly milk explosion every time someone gets hit. You also can’t cut anyone in half anymore, which makes it impossible to get Hibiki’s alternate ending. The Japanese version also has a hanafuda card game, and both have an unlockable art gallery. The PS2 version is the same deal as the Neo Geo CD version, except with no loading times and the same minor slowdown and sound issues that plagued the port of the original The Last Blade. Musashi, one of the bosses from the first game, is playable in the Neo Geo CD and Dreamcast versions, but not in any other ports.

The game was also ported to the PlayStation 4 and PS Vita courtesy of Code Mystics. It’s a straight port of the arcade version, missing both the voice and enhanced soundtracks of the CD versions. However, it includes full online play and a variety of display options to replicate the arcade monitor on an HD television. It may not be the most feature rich, but as far as pure gameplay goes, this is the best port.

“Bakumatsu Special Compilation: Moonlight Swordsmen – The Flower That Blooms in the Moonlight, the Flower That Dies and Falls Apart” is not only a contender for the longest subtitle in gaming history, but also one of the best handheld fighting games ever made. 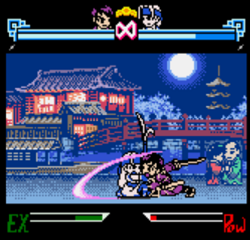 The Neo Geo Pocket is home so some of the best handheld fighters you’ll ever experience. Games like King of Fighters R2 and SNK vs. Capcom are so well made they feel amazingly close to their console brethren. The Last Blade adds its chip to the handheld fighting gambling table and turns out on top. What it lacks in technology, it more than makes up for with unlockables and overall cuteness.

The game plays much like its two bigger brothers, so much that it’s almost scary. Like almost all other NGPC games, it uses pressure sensitive buttons that work surprisingly well. Lightly tapping the A button yields a weak slash, whilst applying more pressure will unleash a strong slash, and so forth. You can set up repel to be whatever you want it to be in the options menu. 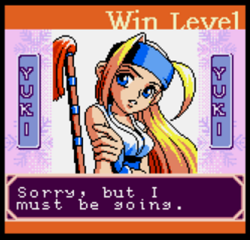 What’s great about Beyond the Destiny is that at first glance, it appears to be a port of The Last Blade 1. You only have the original character roster, and the story is the same. However, after you beat the game a few times, and acquire points, you begin unlocking characters from The Last Blade 2. Unfortunately, a few characters didn’t make the cut. Mukuro/Shikyoh is nowhere to be found, but his sickening appearance probably wouldn’t have worked well in the cutesy, super deformed NGPC motif anyway. Juzoh and Musashi are also MIA, but they most likely wont be missed.

Aesthetically, Beyond the Destiny is one of the better looking NGPC games. It does a very good job of faithfully recreating the look of its console counterparts. The sprites, though super deformed and tiny, still have much of the same animation cues. The stages are very well reproduced, and the 8-bit sounding music hits all the same beats that the Neo Geo games did. You’ll be able to recognize the themes from the console games the moment they appear. 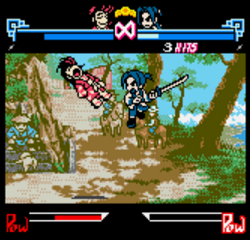 Overall, Beyond the Destiny is everything you could hope for in a handheld fighter. It does the console games justice while not being simply a watered down rehash. It has its own merits and even if you’ve played the originals, Beyond the Destiny still gives you its own reasons to play it. A definite must-have for any NGPC owner. 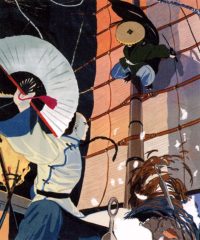 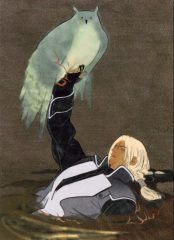 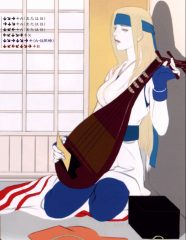 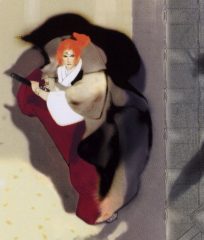 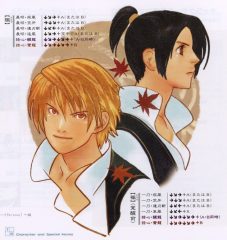 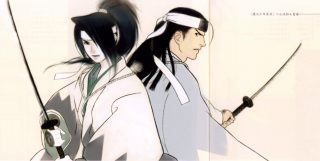