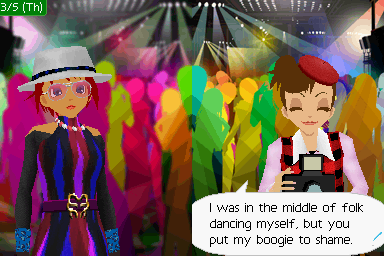 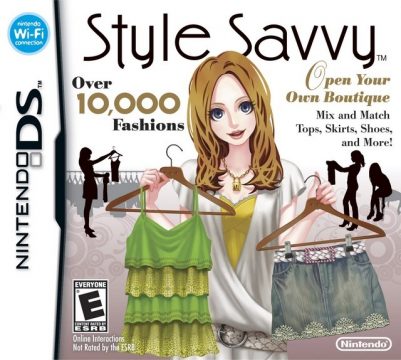 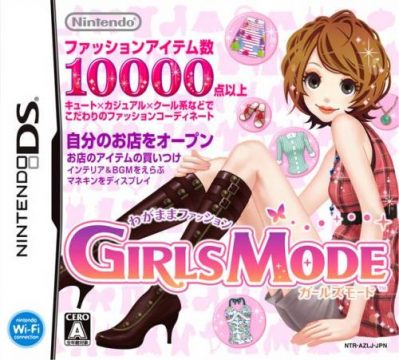 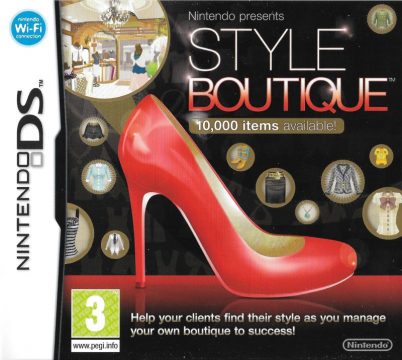 There’s a lot of games out there, and something worth considering is that there’s types of games you may not even be aware of. If you’re a regular reader of Hardcore Gaming 101, odds are good you have a blind spot for the rather large fashion game scene, or only know it for cheap dress up games you may find littering mobile store fronts. Truth be told, the genre has grown a lot over the years, the mobile scene growing their own standards in game design, but there has been one undisputed queen in the genre overall for over a decade now – Style Savvy. 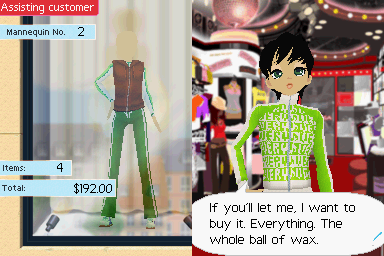 Before we get more into the series itself, here are some facts: Not only is this series published by Nintendo, developer Syn Sophia might be better known under one of its previous names. The people making the most popular fashion game on the market used to be AKI Corporation, who you may remember for making almost every single wrestling game in the late 90s and early 2000s, and also Def Jam Vendetta and SimCity DS for some reason. Nowadays, they mostly make games for young girls, PriPara titles, and also made the PSP Yakuza spin-off series Kurohyou (Black Panther). Because why not.

The point is that Style Savvy was made by a more experienced dev house than most of its contemporaries, and it shows. The first game here starts off with you working at Strata (or Primavera for European players) and quickly showing an eye for fashion, resulting in the store’s financier Dominic deciding to let you run your own store. You get to name it and pick the stock, and the game from there lets you help customers pick out new clothing, take part in fashion contests, and get involved in events that may get you unique photos or even a shot at getting an outfit of your design on the cover of a fashion magazine. 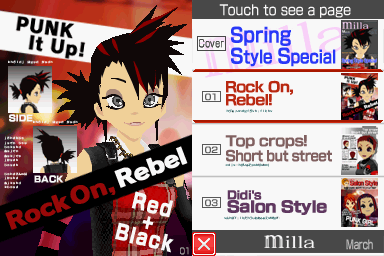 The series has been portable focused since inception, starting on the DS and moving onto the 3DS from there. This makes sense, as Style Savvy‘s formula is simple and based around small bursts of daily play. Clothing for sale at the buyer’s market changes every real world day, and there are often points where the game directly asks you to take a break by emptying out the store for a bit, though you can also go out to other locations to take part in various events instead. It makes it pretty perfect as a portable title, something engaging but not designed for long periods of play. You get what you want out of it in bits, sort of like an Animal Crossing game, which is fitting as both games rely on timed events and elements of randomization.

See, going to the buyer’s market on Sunday doesn’t net you clothing immediately, but new seasonal fashions you can get early dibs on and get delivered to your store the following day. Little details like this give the game some extra life, make it feel like the characters you interact with have lives of their own, and it keeps the illusion up better than Animal Crossing since only your customers are randomized instead of daily content. It has a similar relaxed feel as well, though the core game is trickier than you’d expect. 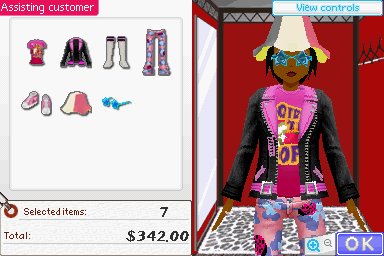 Picking the right clothing for a customer is necessary not just for profit, which nets you personal funds to buy make-up and new hairstyles for your character (you get clothing when you purchase store stock with store funds), but also raises your store rating. It’s on a five star system, and getting those stars up unlocks more content. The tricky thing is that customers can have very varied tastes, and you’ll often find yourself lacking items they’ll want. Your storeroom is very limited, meaning every time you restock, you need to focus on your store’s core appeal and mix in items that may crossover with other tastes. Too much or too little in either category can cause problems.

The most common want from customers is a particular brand type, but also factored in includes colors, styles, and clothing types, all items having sub-types that are sometimes requested. You know, like inner layers being divided into stuff like t-shirts or tops. There’s also strategy is showing customers items, with letting them take a look a low risk but three time per customer limited option that can give you an idea of their tastes if you can’t read it from their outfit or request. 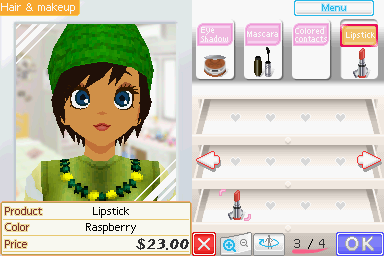 However, the much riskier try it on option can give you a window to sell them something out of their comfort zone, where they’re iffy on the selection, but can be convinced if you pick the right argument. If you’re completely off, though, they’ll leave unsatisfied and you without a sale. Customers often give you very vague requests as well, which is where things really get genuinely challenging. Making an entire outfit can be a big opportunity, but it’s very easy to mess it all up, with even shared brand items sometimes not really meshing together well.

Fashion contests will also check your understanding of style, giving you a prompt for an outfit you have to get as close as you can, then watch your model walk down the catwalk and get the results. You can end up on the cover of the in-game fashion mag for winning, which nets some publicity, and also rare and expensive clothing items as a prize. As your rating goes up, you can unlock increasingly harder contests, and it fits well into your main drive of collecting as much as you can. 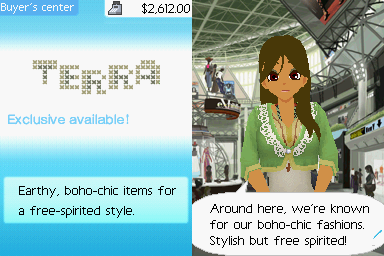 Style Savvy isn’t really a game with a big end game in mind, but instead presents a fairly relaxed experience with a bit more depth then expected. The only real drive is to unlock more clothing and customization options, but it works well because of how fun the dress-up system is by itself. Also, like many DS games from the time, Style Savvy had street pass functionality and multiplayer options, letting players visit one another’s stores and having special contests. There was even Wi-Fi connect that could unlock exclusive clothing. The series was conceived as a more social experience that worked great for Japanese players, and less so for western audiences, as per usual.

The series is still going, with three sequels currently to its name on the 3DS. US releases stick with simple subtitle additions (Trendsetters, Fashion Forward, and Styling Star) while the JP releases stick with numbered titles, and the PAL versions being ridiculous. The second game was called New Style Boutique, then the third and forth took that name and added a 2 and 3 respectfully, despite being the third and forth games. Not confusing in the slightest. For the most part, each new game is mainly a minor update of the previous game, removing things like the ability to wear dresses and pants at the same time, while adding features such as men’s fashions. Styling Star is the big outlier, having a focus on making outfits for pop stars, and including fully voiced musical performances, all this replacing contests from previous games. 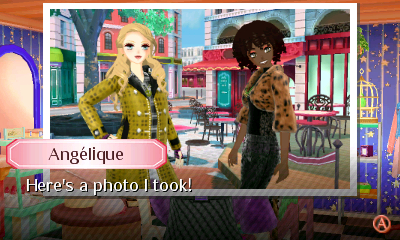 Even with the functionality of the DS original not as it used to be with online services shut down, it’s still worth trying out. The game holds up very well, creating a fun daily routine that’s easy to get into, with likable and charming characters and dialog abound. Style Savvy has a lot of polish to it that puts the majority of the genre to shame, and has gained a strong cult fanbase, especially among a lot of western game critic circles. You can pick any game in the series and start there with little issue if you’re interested, and the original Style Savvy shows an incredibly strong base that was built upon expertly over the past decade. 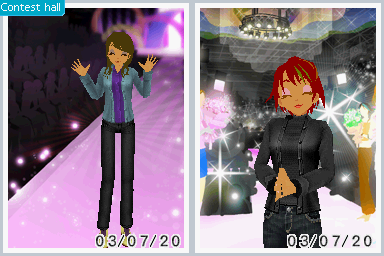 If you still have an itch for fashion games, the DS was also home to Koei Tecmo’s Pop Cutie!, and mobiles have been running the now surprisingly large and lively Love Nikki: Dress-Up Queen, which has a large fanbase around it and a whole mess of clothing to collect (though often hidden in gacha pulls and timed events). It’s probably the current top dog on the smartphone scene, and what the more polished fashion games on the platform get their design base from.