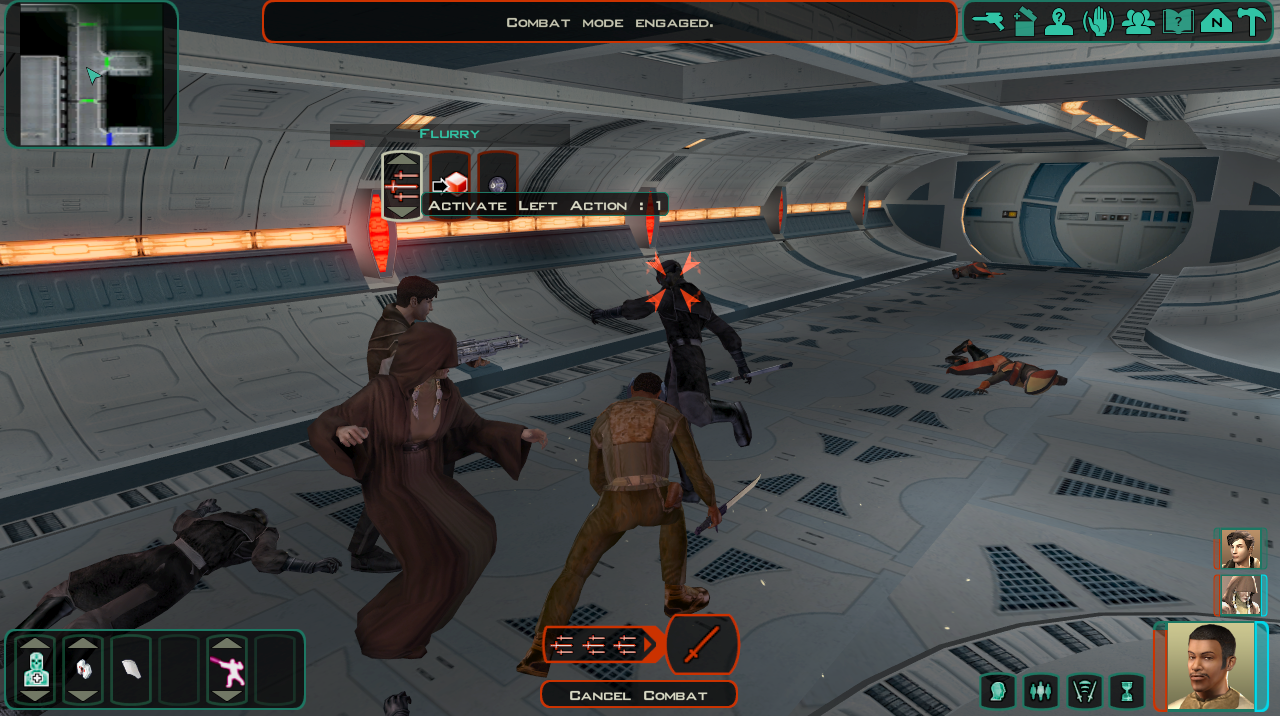 Obsidian and Bioware will forever be two studios intertwined and compared. Before Obsidian became what it is, there was Black Isle Studios, who found their start in gaming closely alongside Bioware in the exact same series – Baldur’s Gate. From there, Black Isle did a few things you may or may not have heard of (Planescape: Torment is on more best games ever list than should be humanly possible), but eventually Interplay hit hard times and dissolved the studio, leading to Obsidian to be born independently in the aftermath. Those ties resulted in Bioware suggesting Obsidian handle the sequel, partly out of respect and partly because they saw LucasArts’ contracted time-frame and decide they would not be involved in that work nightmare. 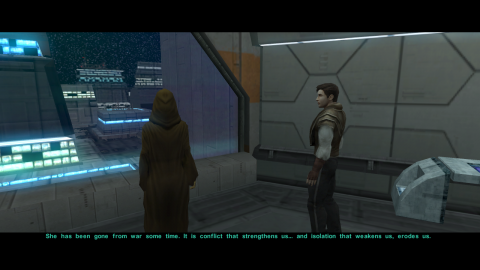 Obsidian didn’t quite meet the timetables for the holiday release either, resulting in the game being technically unfinished, with huge swaths of cutscenes and areas already in the game being dumbed out due to a lack of transition scenes for them, among other reasons. The fact the resulting game ended up being so good anyways, despite having an ending cut to ribbons, is a miracle.

Something to note about Obsidian is that they don’t really do Bioware popcorn entertainment. They make games that like toying with the player or toying with genre conventions, and KOTOR 2 is absolutely in both of those camps. This story takes place a few years after the first, with the war with the Sith now known as the “Jedi Civil War.” A Jedi exile from the times of the Mandalorian War has returned to Republic space through reasons beyond even their understanding, and they are now being hunted by a mysterious sect of Sith as the last Jedi. All other Jedi have died or disappeared, and the exile is now their last major target to take out so their dark ways finally take hold. The exile now needs to survive and look for the jedi who banished them, either to get revenge or get their help against this grave new threat. The party this time, though, is mostly made of morally questionable vagabonds, and it starts to become clear that not a single one of them may be trustworthy. The party includes…

Kreia – The exile’s new master, a mysterious woman who seems to have a past with both jedi and sith. It’s clear she has an agenda, but since she hates every faction, it’s hard to say what that agenda is. What is for sure is that she hates it when the exile is acting saintly or like a serial killer, but she does approve of acts of manipulation. She’s always neutral and can use any force power with no penalty.

Atton – A scoundrel found in a mine station cell. He’s no fan of jedi, but latches onto the exile almost instantly. Hes also one of the few people Kreia can’t read. He’s good with blasters and can get up from fatal blows as long as other party members are still alive.

T3-M4 – The droid from the last game, who’s introduced repairing the returning Ebon Hawk ship and saving the exile’s life. They now has a personality and gets the gang out of all sorts of jams. They also seems to be hiding something from everyone else, taking complete control of the navigation computer…

Bao-Dur – A technician from Revan’s army during the Mandalorian wars and an old ally of the exile. He’s generally peaceful but hides a powerful rage born from the war, among other scars. He has a lot of tech skills and has plenty of strength, making him a great hand to hand fighter.

The Handmaiden – The last (least trained) of the Handmaidens on Telos. She’s an Echani with tons of melee training and joins a male exile on orders of her master Atris as a spy, though her alliances start to shift.

The Disciple – The female exile’s exclusive party member, The Disciple is a scholar looking for jedi relics on Dantooine for the sake of the Republic. His importance runs deeper than that, though. He’s also kind of a tool and almost nobody in the fan base likes him.

HK-47 – The assassin droid from the last game, now collected as a shell in the Ebon Hawk’s storage closet. You can repair him by finding his missing parts and recruit him, where he will mock the melodrama from the last game, suggest new ways to murder, and plan a way to hunt down a sudden influx of poor copies of himself spread around the galaxy.

Mandalore – The new leader of the Mandalorians and very clearly Canderous in an iron shell, right down to his old starting stats. Age has left him weakened, but he can still bring the pain like he always did. He offers to help after you prove your worth, but his real reason for joining is because of a certain missing force user…

Visas – The student sith of one of the game’s main villains, Darth Nihilus. She comes from a dead race and invades the Ebon Hawk after you shift into light or dark side, joining upon defeating her. Unlike most sith, her hate seems focused on herself, giving her an eerily submissive personality.

Mira – A bounty hunter who joins you on Nar Shaddaa if you’re light or neutral. She has an unknown past, but what is known is that she’s the target of a very angry wookie. She has a wrist device that shoots special darts and rockets, plus a load of skills at her disposal. Oddly, she does not kill her targets.

Hanharr – Mira’s greatest enemy, a crazed wookie who despises having to give a life debt to anyone and the desire to see every human alive enslaved for what they did to his people. He joins a dark exile and is the only party member who you gain influence with through insults and abuse. Like Zaalbar, he is STRONG.

Goto – A crime lord looking for jedi, who joins you via a remote controlled droid after Nar Shaddaa. He’s a patriot who wants to keep the Republic alive and stable, despite his constant string of horrible acts. He does what he believes needs to be done, but doesn’t care for excessive goodness or cruelty, like Kreia. He can also hack other drones. 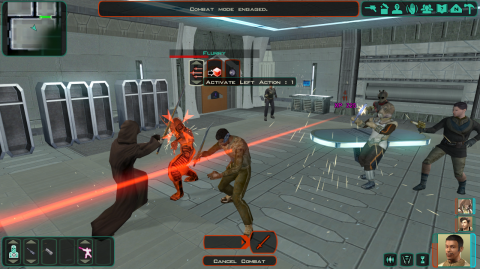 KOTOR 2 is a vastly different game in the narrative, trading the enthusiastic fanboyish celebration for a critical and darker tone. There’s still plenty of jokes, but usually with a grim tint to it, and when the game does get serious, it goes to some genuinely shocking places for this franchise. Hanharr and Atton alone have some bombshells you’d never see in the age of Disney. It’s also a darkness earned, changing the old game’s flopped take on redemption to absence and emptiness. Everyone in the game is some sort of broken person, or one that has yet to figure out who they’re supposed to be. This extends to the exile, as they fail to even understand themselves, no matter which alignment you end up in. The central villains are horrific physical embodiments of this, and the conflicts on every world now revolve around misunderstandings, pre-judgments, and a fear of losing one’s identity. The surprising part is that the game wraps so far into this that the whole experience becomes both a deconstruction of RPGs and the Star Wars mythos itself, with tons of discussions about the endless cycle of the Jedi and Sith warring.

Quests extend into all this themeing. Some are familiar good or evil affairs, but the new influence system will often draw criticism from your party members with you, making you question who you’re choosing to be. Other quests play around with seemingly meaningless actions, like finding out someone’s name, and the results of old wounds or absences, like the salvagers and mercenaries causing trouble on Dantooine. Even the game’s mechanics add to all of this and become deconstructive elements themselves, like how your party’s alignments start to shift through your influence. 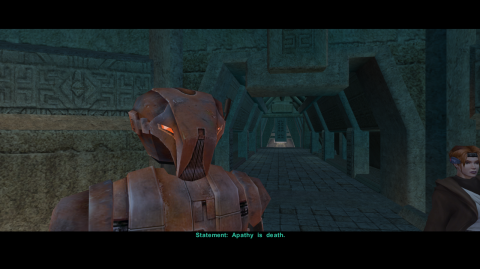 The main systems are also fixed up and better balanced. Skills are now properly utilized and all have purposes. Security now makes lock-picking useful by making some objects break if you bash containers open, and there are now dialog options related to any and all skill levels that can radically change situations. Stealth is still mostly pointless, though, but only because the level cap was removed and your characters can become absurdly powerful quickly. The perks you can gain are also changed up, removing mostly useless perks like implants and adding in perks that let you use dexterity over strength for melee combat accuracy calculations. Even equipment is more fun to play with, now with tons of random drops that can grant new threads with stat and skill bonuses. There’s even lightsaber stances now, which can change the flow of difficult fights.

Almost everything is better, up until the game’s final act. It was meant to be a huge production in where every character would have their own solo sections, including a part where HK-47 infiltrated a manufacturing plant during an invasion, but there simply wasn’t enough time to make the planned sequences. There’s now a restored content mod out that puts back in finished cutscenes and gameplay segments missing from the original release that helps immensely in explaining what exactly happens, though a few details still need to be filled in with developer notes. Despite this one massive flaw, KOTOR 2 stands above and beyond the first game in almost every way, even to the point where it seems aware of it. 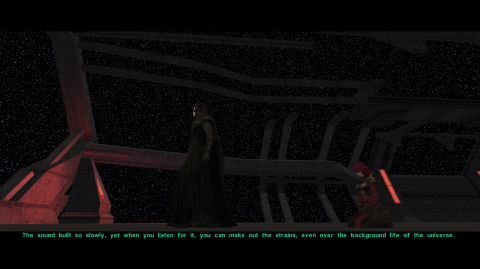 Kreia is genuinely one of the best characters in Star Wars canon, a complicated manipulator who pokes holes in old morals long accepted, and usually makes spot on observations. She becomes the first element of the game that suggests this isn’t going to be a normal adventure, and her presence is felt in every moment as it goes. This isn’t an adventure to save the galaxy, despite that happening in the plot. It’s an adventure of identity, and it twists the old norms of the franchise and the norms of classic RPG systems into a cosmic horror story born fro the echoes of a single unspeakable act. It dives into existentialist dread, and comes out with an incredibly human story told with space magic and and laser swords. It’s all because of Kreia, someone so despicable yet so relatable that she makes one question every single story in Star Wars canon once the credits end. Or, at least this should be the case. Maybe it was at one point. They got close to it, at least, they just needed that defining, cementing moment.

The first KOTOR was rocky but entertaining tale of good and evil. It did what it had to. But KOTOR 2 is a tale of everyone else trapped between those two forces, and the conclusions it reaches are haunting and fascinating. KOTOR 2 is a project of reflection and ambition, and it perfectly cements the key difference between Bioware and Obsidian’s work. Bioware leaves you with a smile on your face, but Obsidian leaves you still digesting what you just experienced. 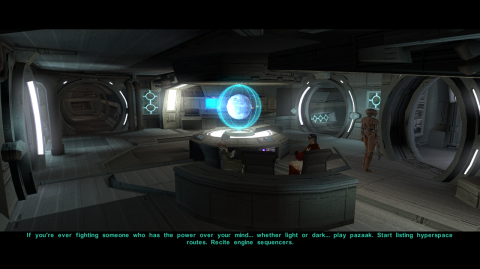 Also Mandalore and Visas have one scene invading an enemy ship where he totally acts like a tsundere dad and a spinoff where they go on adventures of murder and family bonding would be amazing. Please, someone, make this happen.