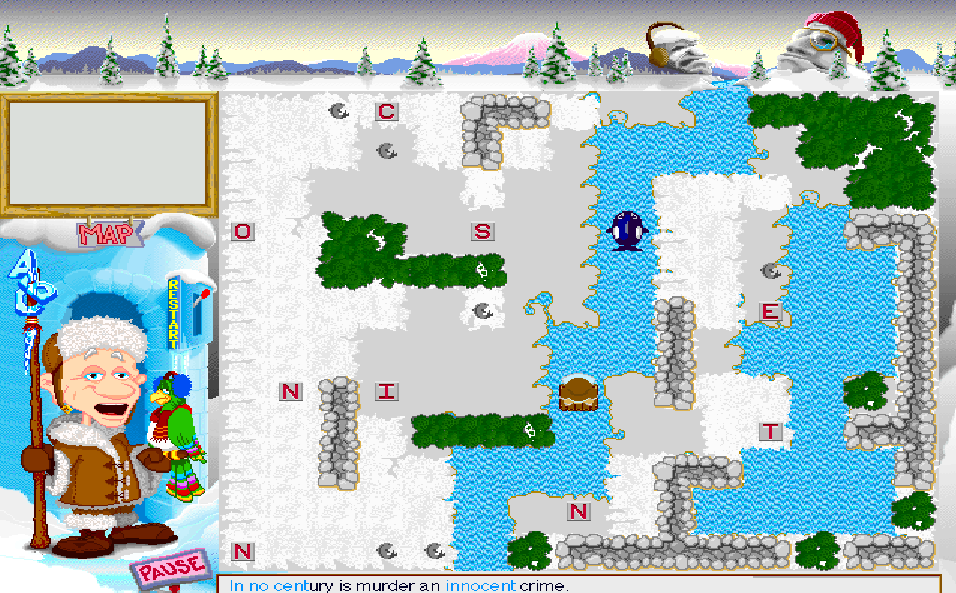 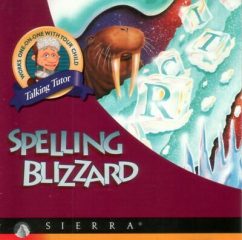 Between Putt-Putt and Carmen Sandiego, the 90’s was full of edutainment games and Sierra On-Line (known for King’s Quest, Space Quest, and Gabriel Knight) decided to get into the action after acquiring Bright Star Technology in 1993. Spelling Blizzard is a top-down puzzle game focused on, as the title suggests, spelling. However, though it’s targeted at kids 9-12, the later puzzles exceeded beyond the target difficulty.

Yobi is one of the three characters of the game. He’s a friendly village wizard accompanied by his parrot Crackers, a tropical bird who wears a scarf and earmuffs to ward against the arctic setting. Yobi is the only character with any personality. He is the guide throughout the game and will offer up sage advice during play and during the loading screen between levels. If the player clicks the pause button, they can click on different objects on the screen and Yobi will give some facts about anything. If the player is idle, Yobi will make a comment, laugh, or pound his staff. The only reason for this laughter seems to be he is laughing at the player’s pain as they struggle through the level. 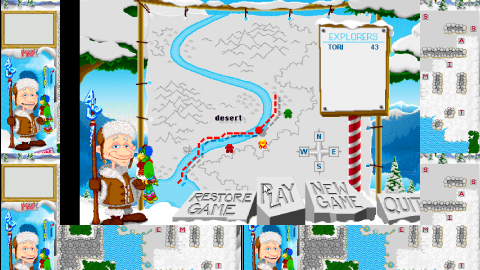 The player is a masked person of undisclosed gender wearing heavy winter clothing. Upon first opening the title screen, Yobi explains to the player that they must travel upriver to discover the cause of destructive flooding. To do this the player must spell words such as “grocery,” “pastime,” and “business” while avoiding various obstacles through each of the 101 levels of the game. Between each level, the player is tasked with spelling the word they made in the recent level plus an escalating amount of additional words (up to ten) as the player progresses.

In all the levels, a raft delivers the player to the starting point. Red and gray letters are scattered about the screen, sometimes with a few wrong ones as decoys. Every time the player collects a letter, Crackers will squawk in approval and if a letter is collected in the wrong order then the player has to start over. The landscape consists of snowy terrain divided by water, trees, and rocks. There is also treacherous ice and crevasses. Snowballs and ice cubes are available for crossing the water or as shields from enemies.

The enemies are abominable snowmen, polar bears, wolves, dart demons, wind demons, and fire demons. All of them want to kill the player if they get too close or within firing range. Moose also run about vertically or horizontally and though they don’t seek to harm the player, they will run the player over if the player gets in the way. If the player happens to fall prey to any of these beasts the player disappears and Yobi says, “Let’s try that one again” before restarting the level. Enemies can also cooperate against the player such as a wolf herding the player to a polar bear or a wind demon blowing the player into a crevasse. 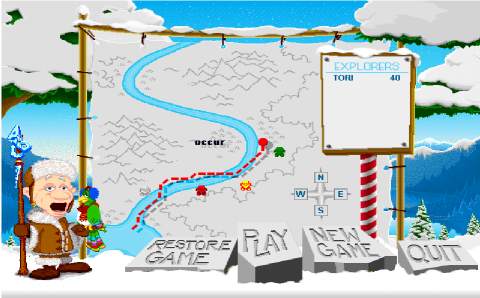 Benign animals such as penguins, killer whales, and walruses walk and swim about the area as well. Each of these can be bribed with mackerels to freeze in place or in the orca’s case, allow the player to ride the creature. But if you stay on the whale too long the bribe can expire, and the player will drown. These benign animals can be used as shields against enemies, but walruses can become equally irritating as they can corner the player in one place forcing the player to restart the level by clicking a lever on Yobi’s hut.

Every ten levels, rainbow-colored trinkets are available, which require the player to go out of their way to collect to receive a bonus at the end of the game. Rarely, a player can collect magic potions with temporary effects that allow them to be immune to fireballs or walk across water. Thus, strategy for this game mostly consists of timing and running for dear life.

Furthermore, the level isn’t over until the player is back on the raft. Sometimes if a snowball isn’t left available the player has to restart the level because they can’t get to the raft. The raft then whisks the player away to the spelling challenge. After a player spells a word correctly, a cute character, such as a monkey in a ski suit, a lumberjack, or a Viking, will climb to the top of the spelling board marking how many words the player has spelled. 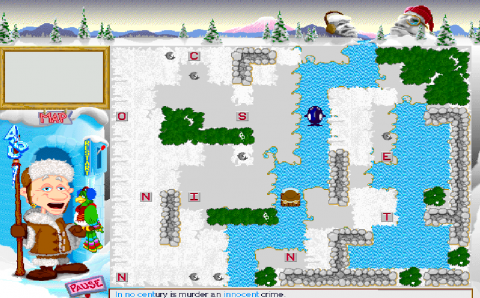 Since this game was made in the early 90’s the graphics are mediocre and flat, but not terrible. The animation is smooth and the northern lights in the background of the spelling quiz are pretty. Though the puzzle gameplay is top-down, the side-bar options are in third person as well as the spelling quiz, giving the game a strange mix of point of views. 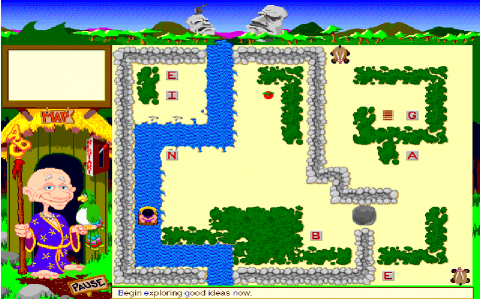 Spelling Blizzard is actually the sequel to its culturally insensitive predecessor Spelling Jungle, also known as Yobi’s Basic Spelling Tricks and Yobi’s Magic Spelling Tricks. It had a name change after Bright Star merged with Sierra. Blizzard is basically a remade version. The game mechanics are nearly identical, only the setting has been changed from an African Jungle theme to an Arctic North theme. In the original game, Yobi wears a purple robe and is bald. Crackers is the same without the earmuffs and scarf, and the player wears just a yellow mask and a loin cloth. The levels in Spelling Blizzard are more difficult than the first as the original game was designated for children 7-10. Though Spelling Jungle was clearly set in Africa as shown by the hippopotamus and gazelle in the game, all of the characters were white-washed, even the player. Spelling Blizzard has the same mechanics with more of a challenge (especially past level 50) so it makes the original game redundant.