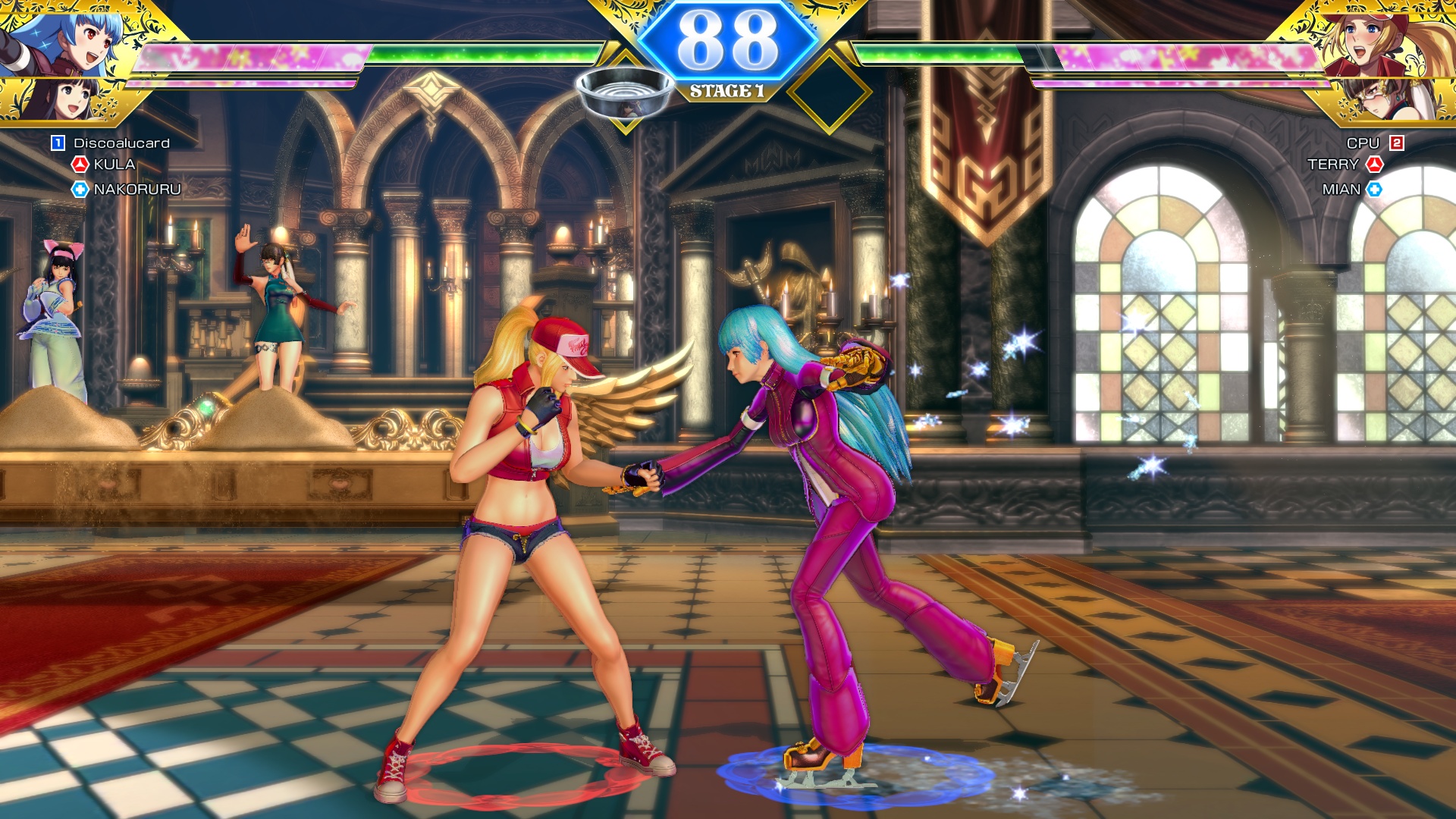 SNK’s fortunes have ebbed and flowed over the years, having gone bankrupt in 2001 then resurrected by Playmore, then floundering again for a bit before being purchased by Chinese company Leyou Technologies in 2015. That rejuvenation brought about The King of Fighters XIV, which despite its somewhat low budget exterior, proved to be both a minor hit with fighting game fans and enough of a financial success to continue the brand. Their follow-up project focuses on its female characters, into the 2018 release SNK Heroines: Tag Team Frenzy.

This isn’t the first time SNK focuses on this side of the roster, as they previously had an all-girl fighting game for the Neo Geo Pocket Color called SNK Gals Fighters, though the later release amps the sex appeal, following the easy money laid out by other titles like Dead or Alive and Senran Kagura. The extremely sketchy premise is that Kukri, one of the new fighters from KoF XIV, is revealed as a weird sex pervert, and has transported assorted SNK girls into a pocket dimension, where they’re given different costumes and forced to fight their way out. 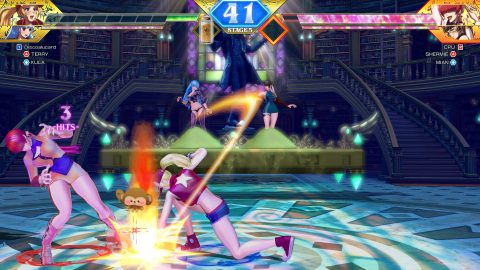 The roster of characters includes Athena, Yuri, Mui Mui, Sylvie Paula Paula, Kula, Mai, Leona, Nakoruru, Zarina, Love Heart, Mian, and Luong. It seems like these were chosen based on whatever character models that were available from The King of Fighters XIV – the only “new” ones, in that they weren’t directly imported from that game, are Shermie, as well as a female version of Terry Bogard, having been granted an enormous chest and a “Fatal Cutie” baseball cap (plus Kukri as the final boss). While arguably most of SNK’s most popular female characters are represented, the rest of the cast is rounded out by newcomers that have yet to earn their place among SNK’s better known women. Characters that were Gals Fighters but missing here are Whip, Akari, Yuki (Kyo Kusanagi’s girlfriend), and Shiki, as well as Miss X (which was just Iori in drag); other notable roster omissions include Vanessa, Blue Mary (who shockingly took until the 2nd DLC pack to even appear in KoF XIV), King, Angel, and Hinako.

Despite obviously being based on The King of Fighters XIV, SNK Heroines doesn’t play like it, or any other SNK fighter for that matter, a change probably made so it both feels more distinct and makes it more attractive to casual players. Most tag-team fighting games are faster paced, and so expectedly SNK Heroines moves at a quicker tempo. There are only two main attack buttons, light and heavy, and so attacks combo effortlessly into each other. Opponents are also bounced off of the sides, allowing them to easily be juggled after an initial volley of attacks, and air dashes are allowed.

Beyond this, the mechanics take a little bit of unlearning for fighting game vets. A third button is used entirely for special moves, in conjunction with a direction or executed in mid-air. Try as you might, but command motions won’t even work at all. A fourth button is used exclusively for throws, which can also be done mid-air. Perhaps most controversially, there’s now a block button, assigned to the left shoulder by default, so holding backwards will just accomplish nothing. It’s also used for a variety of defensive maneuvers, including the usual King of Fighters forward/backward rolls, jump feints, and recoveries. This almost seems intentionally awkward, as if the game really wants you to subconsciously forgo defensive techniques in favor of aggressiveness. You can’t duck either, and with that, no lower attacks, and no mixups. 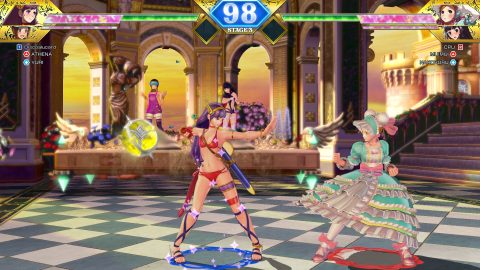 The life/spirit bars are also combined into one and initially split into halves at the beginning of the match. Every special move will drain spirit, though it recovers quickly on its own. You can still execute special moves if it’s empty, but the attack will simply be ineffective. However, as you take damage, the spirit gauge fills its empty spot, the idea being that the lower your life, the more stamina you have. Rather than focusing entirely on special moves, this seems to emphasize the use of items, which are contained in orbs sprinkled regularly on the field and activated (and aimed) using the right analog stick. These range from comical things like gigantic frying pans and banana peels, to assorted recovery potions.

Keeping an eye on your spirit is important because you can only knock out opponents with a super special move (“Dream Finish”), executed with the right trigger button. These do, however, require a significant amount of spirit to pull off. Once a character has run out of life, they’re easily dizzied, but if the attacker doesn’t have enough spirit to pull one of these off, then they’ll still be allowed to fight back once they recover.

The tag team mechanics play an important part here. The game works by Tekken Tag Tournament rules, in that only one character needs to be knocked out and then the fight is over, so most matches tend to be pretty speedy. However, unlike other tag team games, both characters on one side share the same life meter, but will regenerate their spirit when on the sidelines. This means that if you’re about to KO your opponent but lack the spirit to do so, you can just switch out to your other character, and they’ll probably be able to take care of it for you. 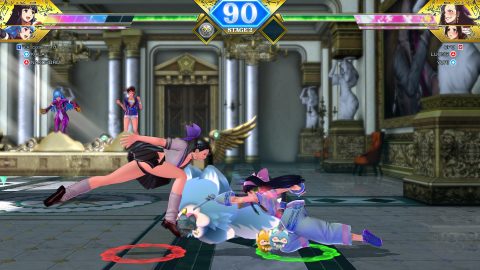 The action has a ton of energy, and the special move buttons remove the need to ever look at a command list, because almost all of it is extremely obvious, so you can easily jump into unfamiliar characters. But the shallowness more shines through with its limited roster, at least at release – fourteen fighters just isn’t very much to get excited about, especially when none of them are really “new”, plus only seven backgrounds.

The single player story mode is the weakest part of the game. It mostly consists of the characters wandering around Kukri’s mansion, talking either to themselves or yelling at no one in particular, viewed through surveillance cameras. Occasionally there’s a purportedly funny scene with Kukri acting like a weirdo or one of the defeated women being encased in sand, the game’s recurring motif since it’s one of Kukri’s abilities. It’s all pretty dumb, with the only high points being the unique prologue/ending dialogues for each character combination, and the classy wallpaper unlocked at the ending for each of the heroines.

The skimpy outfits for most of the characters is played up right from the outset, with each of them having some kind of embarrassed or surprised expression about whatever fetishistic costume they’ve found themselves in. SNK’s roster of women is one of the strongest of its type because of its variety – there have always been obvious sexpots like Mai Shiranui, but characters like Blue Mary and Leona exuded appeal with their strength, while Nakoruru and Yuri were more cutesy, so their attractiveness arose from numerous factors and details. Here that’s almost entirely undercut by just sticking them in outfits that show off a ton of skin – forget how Leona was easily as tough as Ralf, Clark or Heidern, here she is in cat ears and a hip-hugging bikini bottom! (The exception to this is Mui Mui, who shows up in a super frilly sweet lolita dress.) In previous games like Garou: Mark of the Wolves, characters like B. Jenet had a fairly revealing outfits, but her fdistinctive, flowing dress and her sultry, confident animation was part of her allure, making her a lot classier than, say, Love Heart here, who is just stuck in a sexy cop Halloween costume.

That being said, their original outfits are very easy to unlock, and the alternate third costumes are usually a little less pandering. A nice touch is that the character’s drawn artwork reflects their costume, instead of just using a 3D model, which is what other polygonal fighters tend to do. They also look a little less uncomfortable when wearing their regular clothes! Conversely, players that are very much here for the boobs may be somewhat disappointed that there’s currently only three costumes per character, even though the ones that are there are pretty revealing.

In fact, compared to other fighting games, SNK Heroines is more generous than usual when it comes to unlocks. It’s mostly just two extra costumes for each character plus a bunch of goofy accessories, as well as assorted things like artwork and voice variations, but you can earn everything relatively quickly through gameplay, and there aren’t any microtransactions. Much of it is just relegated to a dress-up mode though, where you can customize everything from facial expressions to poses, then take a picture of them for an in-game avatar. 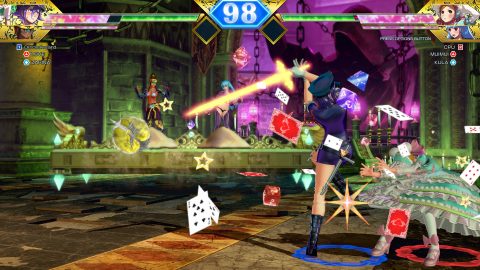 The most recent incarnation of SNK has come a long way from when The King of Fighters XIV was released, which originally resembled a chintzy budget project but was subtly improved over a series of revisions. The character models here aren’t really any different than the previous game, but the visuals greatly benefit from the more cohesive aesthetic, especially the classy backgrounds of the mansion, which are a great improvement over the empty, bland KoF IV locales. The cutesy hitsparks – cartoons animals, etc – make the action seem a little too busy, and there’s no way to disable them, but it also heightens the distinct graphical panache. Overall, the game’s not quite as detailed as Street Fighter V, and nowhere near the level of any given Arc System Works game, but at this point SNK’s work has surpassed Marvel vs. Capcom Infinite – not exactly a high bar, but an improvement nonetheless. The music, though, is less successful. A few tracks are decent, but the remixed songs from older games are unfortunately quite weak.

SNK Heroines‘ isn’t quite meaty enough to feel like a full standalone product, but there’s also more to it than just a low budget cash-in. Its in a weird state where it’s not technically an original product (being a KoF IV spinoff) but also the first release of subseries that’s kind of barebones, as initial entries typically are. Its legs will be determined by how well it’s served by DLC, as well as how much SNK will be charging for the additional content. As it stands, it’s a fun, snappy game, one that’s a little sleazy but can be adjusted if it’s not to your taste, and distinct enough from its predecessor so that it’s not redundant.

The game runs smoothly on the PlayStation 4, but currently has substantial frame rate issues on the Switch. Strangely, only the Switch version received a standard retail release in North America, with a physical PS4 version only published as part of an expensive limited edition. An arcade release is expected in Japan, though nothing is available for Windows as of this writing.