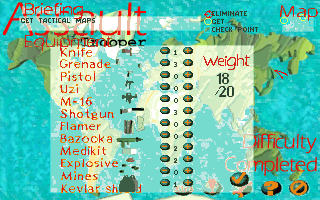 There’s big trouble in Little Third World: missiles are being stockpiled in Panama, people are held against their will all over North Korea, and Armenia suffers under the iron fist of a vicious dictator. Everyone knows stability breeds peace, but the UN’s angry letters aren’t exactly fixing any of these situations. Time to find someone skilled enough, resourceful enough, and crazy enough to go into the danger zone and engage in some plausibly deniable shenanigans.

Assault Trooper doesn’t exactly sell itself by its screenshots, given that it is played at roughly the same resolution as the photo on your driver’s license, and uses fifty shades of vomit for its color palette. Even when you boot the game up, the graphical issues persist: the equipment menu is a chore to use for every mission due to the misalignment of items and quantities. It’s difficult to tell if you’re loading up your satchel with medkits or landmines until you go into the field and realize your error the hard way. The game could benefit from a larger sound library, too: no music, a handful of gunshots and explosions, and two death screams for slain enemies (even the dogs, humorously enough). 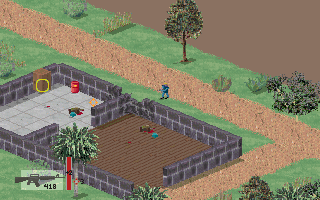 Where Assault Trooper shines is its Commando-style gameplay (as in Schwarzenegger, not Capcom). This is a gem of the DOS era buried under piles of ugly pixels and a badly rendered title graphic. You play a special forces commando traveling around the world to save various third world countries Team America style (forgiving the fact that the game is actually Finnish). Your missions range from rescuing hostages, to stealing documents, to blowing up missile silos, to assassinations. All the while you’ll be shooting or avoiding squads of patrolling soldiers, turret-mounted machine guns, strangely human-sounding attack dogs, and even roving gun boats. 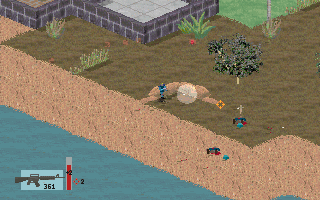 There are a ton of locations to go World Policing in, and you choose them at your leisure on the world map. As you complete the easy missions of each location, harder missions are unlocked. It’s a Megaman-esque Rambogame with infinite lives and enemies that fart out their ghosts upon death, which seriously never gets old.

Upon accepting a mission, you are treated to a balancing act of army gear on the equipment screen. Money is no object, but your little Arnie’s carrying capacity is limited depending on the difficulty setting. Do you load up on assault rifle ammo, or forego it for a kevlar vest? Or will you go hardcore with nothin’ but knives and grenades? Sometimes it helps to dive into the mission and get the lay of the land before deciding whether you’re going to shoot your way into the complex or dynamite the walls once you find the objective. Progression can sometimes feel like trial-and-error as you get a feel for each mission (and regret your initial equipment choices), but it always feels like an adventure, leaving you alone in the jungle against an unknown enemy force. 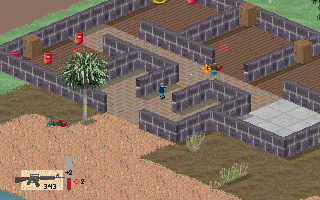 The pre-mouselook controls will take getting used to, though: arrows to turn and move forward/backward, CTRL to fire, ALT to strafe, SHIFT to crawl like a pixelated infant. Basically you move through each mission like a drunken stumble-bum, but after a few failed missions it starts to feel natural. Or maybe tolerable is the right word. Let’s go with tolerable.

Crawling is especially important when you want to take the stealthy approach to your mission: when you hide behind shrubbery or other obstacles, enemies can’t see you to shoot you, and you can slip right past them or get the drop on them (the commando’s hilarious baby-crawl is an added bonus). Of course, this usually means you can’t see the enemy either, and have to use the red sound indicators on the edge of the screen to figure out where they are. And it can be a rude awakening when the sound you thought was a lone soldier turns out to be an attack boat which proceeds to run you through a hot lead cuisinart. 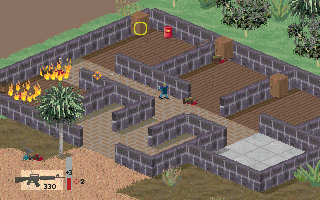 Assault Trooper is an ugly but nonetheless fantastic game that deserves more attention from old school gamers, especially those who remember playing the demo on those “100+ Games” disks of yore. The game’s official tripod site is still online, consisting mostly of a screenshot, a free download of the registered version, and instructions for how to use the mission builder tool.