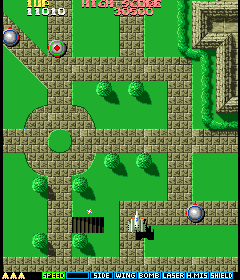 Slap Fight, also known as ALCON (“Allied League of Cosmic Nations”) in North America, is Toaplan’s second shoot-em-up. The story takes place in the year 2059, and mankind has colonized on a planet called Theon. Aliens that had chased colonists out of previous planets before are trying to chase humanity out once more, so the Allied League of Cosmic Nations sends in a SW475, the playable ship, to stop the aliens from attacking. The most notable feature of this ship is its ability to adapt to situations and change shape.

The game’s main gimmick is its power-up bar, which was obviously inspired by Konami’s Gradius (released the previous year in 1985) but works slightly differently. Destroyed enemies will drop capsules, which will then advance the power-up bar by one square. Using these, you can pick whichever weapon or power-up you want, though most of the stronger items are near the end of the bar, requiring that you grab more capsules. It also inherits an element from Data East’s B-Wings, also released in 1985 – whenever you change weapons, your ship also changes shape, changing your hitbox and often making you a bigger target for enemy fire. 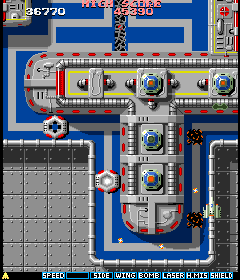 The upgrades on the power-up bar are Speed Up, Shot, Side Shot, Power Wing, Bomb, Laser, Homing Missile, and Shield. The Speed Up is one of the most useful, because even at full speed, enemy bullets move faster than your ship. Shot is the default weapon, and a very piddling attack with a short range. Side Shot is a strange, and more original attack that puts guns on the side of your ship that fire 90 degrees of your normal shot.

The second half of the upgrade bar hold the more powerful attacks, but all of them except Shield triples your size upon use. Power Wing drastically improves your firepower, and may be used up to three times, adding on satellites that clutch onto the new wings. Unfortunately, the satellites are destroyed with one hit and are not actually very useful. Bomb turns your normal shots into powerful bombs that explode directly in front of your ship. Much like the Laser and Double in Gradius, Bomb is mutually exclusive with most of the other weapons. Note that when used with Power Wing, you get to shoot three bombs at once every time, which is incredibly powerful.

Laser, as expected from most shoot-em-ups, offers a very powerful attack that only shoots in front. Homing Missile shoots slow moving missiles that home in on enemies. Shield gives a force field that absorbs three bullets but also lasts a limited amount of time. Most power-ups temporarily turn you invulnerable and put you in the center of the screen when used. This can be good to get out of a tight spot, but it can also lead to some cheap deaths.

When Slap Fight was taking notes on Gradius, it also inherits its central flaw. If you die in a checkpoint where none of the enemies give out upgrade stars, you’re basically screwed. Still, it’s less overwhelmingly difficult than Tiger-Heli. 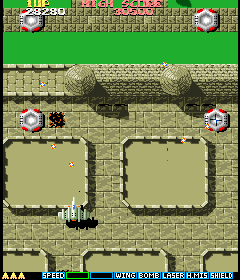 Slap Fight was ported to many Western home computers with varying degrees of playability, all developed by Probe. The ZX Spectrum version is a mess. The colors are all in black and white, the sound is terrible, the enemies and their attacks are hard to see, and the low resolution screen makes it hard to tell what is even going on. The Amstrad and Commodore 64 ports are at least more playable.

Slap Fight was also ported to the Mega Drive in 1993, where it was renamed Slap Fight MD. It’s an odd game to release considering the arcade version was seven years old by that point, and looks hugely dated not only compared to other 16-bit shooters but also to the other games Toaplan had put out at the time. It was published by Tengen and developed by MNM Software (now Mindware). Still, the developers put quite a lot of work into it, including adding a completely different arrange mode, along with a faithfully recreated arcade mode. New additions include enhanced graphics (though they’re still pretty basic) and a soundtrack that attempts to replicate the PSG music of the original game, though it’s kinda high pitched and annoying. The only major change is, of course, altering the screen to fit the horizontal orientation by pillarboxing the screen. 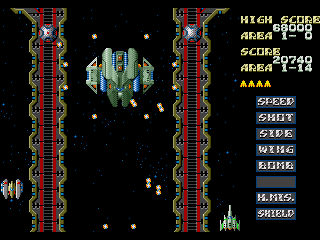 The added “Special Mode” features new levels, new bosses, a new soundtrack, and a new ability called the Typhoon Bomber. This allows you to sacrifice your abilities (and shrink your ship’s size) in exchange for a screen-clearing explosive attack. The new soundtrack exclusive to the “Special Mode” was composed by Yuzo Koshiro, famous for composing the music of Sorcerian, Streets of Rage, and Actraiser. It’s definitely the best version of Slap Fight, but like many Mega Drive shooters, it’s quite pricey on the aftermarket due to the low print run.

There is also a separate release of Slap Fight on Taito Nostalgia 2, a standalone plug-and-play TV game. In addition to a decent arcade replication, it also features an extra mode called “Slap Fight Tiger”, where you can play as the helicopter from Tiger-Heli. The weapons have been changed, and some enemies have been changed to resemble foes from Space Invaders.

While Toaplan continued to build upon Tiger-Heli for most of its subsequent shoot-em-ups, their 1993 shooter Grind Stormer can be seen as a sort of follow-up to Slap Fight. 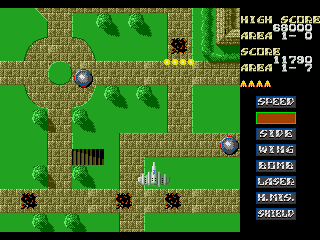 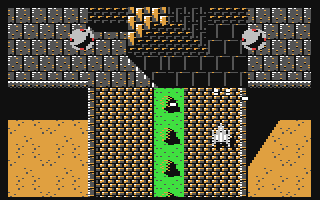 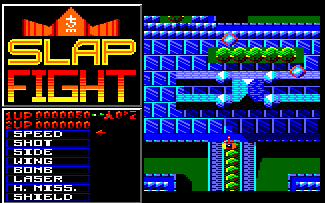 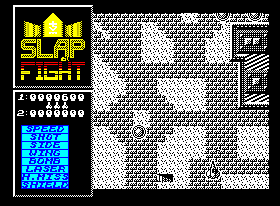