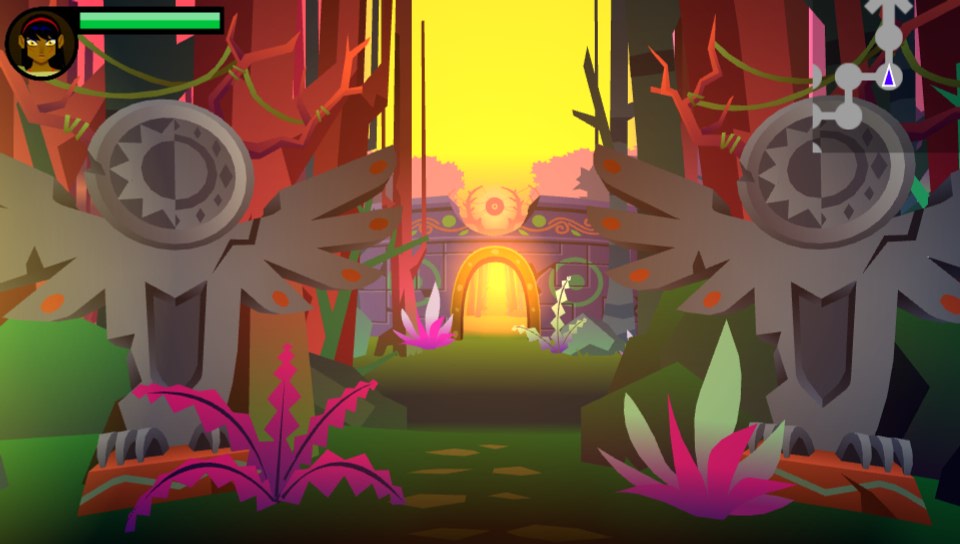 The elevator pitch for Drinkbox Studios’ Severed is basically “Dungeon Master meets Fruit Ninja“; that is to say, a classic first person dungeon crawler with touch screen combat. It’s a strange concept, to be sure, but it works astoundingly well in practice.

You control Sasha, a young woman who awakens in a mysterious world – purgatory, perhaps? – to home ransacked, her family missing, and a bloody stump where her left arm used to be. Wielding the sword left by her mother, she ventures off to the wilderness, and the ruins nearby, to defeat the demons that stole her kin, and maybe find a way to return to the real world. 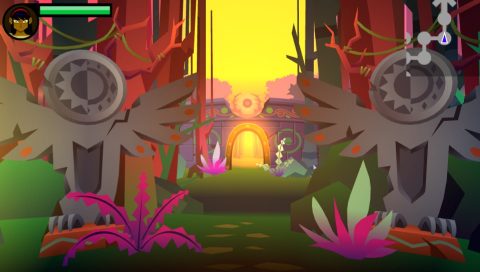 The exploration is handled like the classic Western computer RPGs, with an emphasis on simple puzzle solving – flip switches to open certain grates, hunt for hidden blocks on the wall, and so forth. The automap is extremely generous, keeping notes even on relatively trivial information, ensuring that you know exactly what’s around you at all times. Through progress is linear, the world is interconnected, with a handful of large dungeons connected by brief exterior areas. Peppered regularly throughout the halls are white flames, which indicate enemy encounters. They’re always positioned in the same spot every time, with the same enemies, and cannot be avoided. Here, the goal is to slice enemies to bits using the touch screen. On the basic level, you can just scribble on them to cause damage – short swipes are weak while long swipes are much stronger but obviously take longer to draw – plus, if timed correctly, you can swipe to knock away attacks. Each enemy has unique patterns that determine their defenses, as well as when they attack. The fast action promotes aggressive slashing, as opposed to the “block and counterattack” method of other touch screen battle games like Infinity Blade, or even its forebear, Mike Tyson’s Punch-Out!!

It’s pretty simple at first, but the game is constantly iterating its challenges, often surrounding you with multiple foes in different configurations. You can only attack a single enemy at once, so you’ll need to regularly turn in different directions to face your target, while keeping an eye on the indicator at the bottom of the screen that shows when the next enemy will strike. It forces you to prioritize your offense and defense – some enemies attack at regular intervals, others can be kept at bay by making a quick swipe. The game piles on more tricks as you gain more powers, like rock shields that need to broken with a powered up attack, or battles that take place over the sky, giving you a hard time limit before you plummet to the ground. It’s tough, and requires quick reflexes, good prioritization skills, and plenty of practice, though the penalty for death is light, as you simply resurrect, fully healed, just moments before you entered combat. 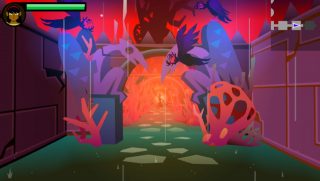 Upon defeating your foe, assuming you’ve built up your “focus” meter by building up combos, you’ll temporarily slow down time and are given the ability to dismember your opponent. The timing is strict, and it takes practice to slice off everything in the allotted time, but these severed body parts – limbs, eyes, organs, jawbones – are used to upgrade your abilities. At first you primarily strengthen your attack powers, but later on you get a few magic spells, which can temporarily freeze enemies, steal enemy buffs, or greatly increase your strength. You can also explore to find health and magic extensions, whose locations are often clued via books spread throughout. Power-ups are created through arcane combinations of these body parts, though you can also craft your own with generic giblets, held in breakable pots. 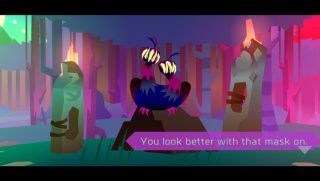 As the game progresses, enemy magic becomes much more powerful, requiring that you use your own spells to counterbalance theirs. At any point, you can revisit previous areas, using new powers to unlock previously inaccessible areas and find new bonuses. This is heavily advised, because outside of a single area near the end of the game, the enemy encounters are static, and there’s no way to grind. There’s no real way to completely overpower most of the battles in this game anyway, though being able to absorb an extra hit or do a little bit more damage to a frozen enemies can potentially be the narrow difference between victory and defeat. Taken altogether, the combat is exciting, constantly challenging you while providing the very simple thrills of carving monsters to bits while harvesting their organs for strength, and the exploration is equally as entrancing. The animation is a little odd at first – though you can turn a full 360 degrees and move on 90 degree blocks, there’s a strange facing effects with each square you move. While disorienting to anyone familiar with newer dungeon crawlers like Etrian Odyssey or Legend of Grimrock, it does add in the ethereal nature of the world, even if that’s not its intended purpose. 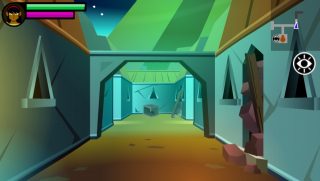 But the world design is one of the main reasons why Severed is so fascinating. It borrows the bountiful color scheme and angular character designs of Drinkbox’s previous game, Guacamelee, though this time it’s influenced by Aztec lore rather than Mexican wrestling. The exterior areas glow with shades of yellow and purple; even the relatively standard dungeons and caves are represented with radiant hues. But the vibrancy also contrasts with the violent nature of the setting, where death is common and fallen foes explode in messes of blood and gore. The plot has similar disparities – your main companion, if one could call him that, is a two headed crow, who pops by every once in awhile to make foreboding proclamations or poke fun at the heroine’s dark fate. 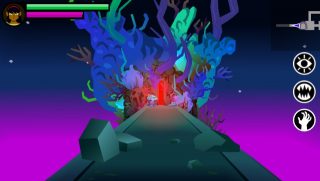 The journey is accompanied by a soundtrack courtesy of Yamantaka // Sonic Titan, with quiet guitars and rattles that set the tone for the explorations, with chanting vocals that are layered in with the more intensive battle theme variations. It changes depending on your location, and it makes the first person dungeon diving even more entrancing. 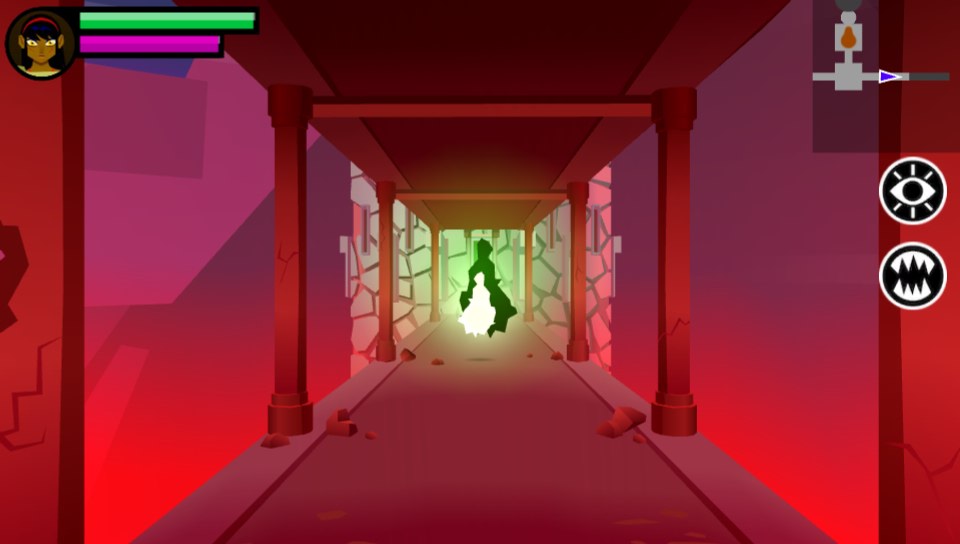 Sasha, as a character, doesn’t speak, and given that you view most of the game through her eyes, is seen only on the status menu and in the brief cutscenes. But she’s such a badass character, starting first as a simple village girl with just a sword and steely eyed gaze of determination, eventually assembling all of the equipment that turns into a demon carving machine by the game’s finale. 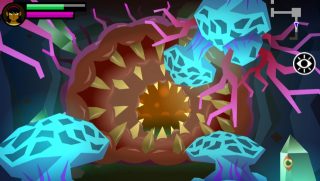 The overall adventure isn’t terribly long – expect 6-8 hours, even including backtracking to find old stuff – but every new area is entrancing, and the combat keeps throwing new gimmicks at you so it never becomes tiresome. Severed is a brilliant game, and one that works to dispel the nature that touch screen-focused games can be far more than mere casual fodder. 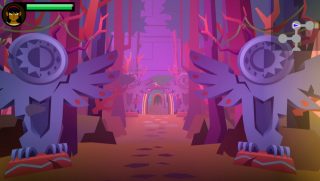 Severed was first released on the Vita, though a stylus is recommended for some of the more precise swipes. The 3DS version suffers from lower resolution visuals and a tighter, square shaped touchscreen. In the Wii U version, you’ll be spending all of the combat staring at the rather poor tablet screen, which degrades the visuals. The mobile phone versions are perfectly playable, though the D-pad on the other versions makes turning during combat much easier. The Switch version is the same as the Vita version but at a higher res.