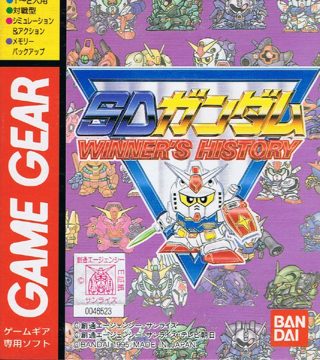 The Gundam universe is blessed with a plethora of games, many of which never left Japan. Among these is SD Gundam Winner’s History, a 1995 title for the Game Gear. Developed by ITL and published by Bandai, it is notable for being the only one of its kind for this system. SD Gundam Winner’s History is part of a group of games sometimes referred to as the Gachapon Senshi series. More an amalgamation of titles rather than a game series in the traditional sense, the Gachapon Senshi games all have a couple of common features: they feature turn-based strategy fixed with real-time battle, and focus on capturing territory and producing new units in the field. These games remained popular over several generations of consoles, starting with the Famicom Disk System and ending with GameCube and Wii.

SD Gundam Winner’s History brings this concept to the Game Gear. It offers a campaign with 21 maps as well as a skirmish mode and multiplayer matches against another human player. The setting is somewhat vague. Depending on the path the player takes through the campaign, it somewhat resembles a retelling of the One Year War, the principal conflict in the original 1979 Mobile Suit Gundam. At the same time, factions such as Axis Zeon, the Titans, and the Zanscare Empire and their military hardware are present, lifted from Mobile Suit Zeta Gundam and later series.

Even more color is added to the mix by the various factions, all of which are alliances between various Gundam groups, sometimes crossing the boundaries of time and space. The intended player faction is UTN SP, representing the Earth Federation Forces and other protagonist factions from earlier Gundam TV series. Opposing them are the Titans, Axis Zeon and Neo Zeon (both of which include various Zeon subfactions) as well as CV-ZAN, a coalition of the Crossbone Vanguard and the Zanscare Empire. Interestingly, any faction can be picked for the campaign, even if this results in the player fighting their own side. The only faction that never appears as an opponent is UTN SP – skirmish and multiplayer matches aside.

All factions have distinct units divided into two groups: Gundams (or more correctly mobile weapons) and battleships. The former are weaker, but can capture various structures, whereas the latter are more powerful and can transport smaller units. Combat varies as well. When two Gundams meet, SD Gundam Winner’s History brings up a battle area. Here, the two opponents face each other with lasers and beam swords until only one remains or the time runs out. Battleships, on the other hand, use long-distance bombardment and take a fixed amount of damage, or support another unit from afar. This adds a nice layer of strategy, giving the player the option between a swingy battle where even a weak Gundam stands a chance, and the safe and predictable damage a battleship deals. Should a Gundam engage a battleship, only the former gets to dodge, but takes high amounts of damage every time they fail to do so.

The variety does not end here, however. Many Gundams have a knack or two. Some have a bombardment ability on top of their laser and beam sword attacks. Others can shift into a more agile form, have a special tertiary attack, or are especially suitable for certain terrain type like space, land, or water. Battleships, on the other hand, are a lot less interesting. None of them have any special abilities, and their statistics are identical across all five factions. Additionally, SD Gundam Winner’s History falls into a common strategy game trap: a player is limited to 16 units total, but each unit only takes one slot, no matter whether they are a low-tier Gundam or the most expensive battleship available.

This issue is aggravated by the campaign structure. At the end of each mission, all player units and credits are transferred to the next map. This even includes units that were still under construction at the end of the previous match. Thus, a player is encouraged to assemble an army that primarily consists of battleships. Gundam are still needed to capture structures, but five or six of them are enough for the job. This design choice front-loads most of SD Gundam Winner’s History’s difficulty. At the start of a campaign, the player is often outnumbered and outmatched, has units with no experience, and not a whole lot of money.

Whoever decides to just rush every map might regret this in the long run. Instead, the best long-term approach is to capture colonies and cities as quickly as possible and reduce the enemy army to a handful of units. All maps are timed, with the limit usually being 20 or 30 rounds. Most maps can be completed in half that time, but any additional round that passes fills the player’s coffers and gives them more time to expand their army. If done right, a player’s army will be more or less invincible halfway through the campaign, especially if they properly train their units. For each defeated enemy, a unit gains experience. With enough experience, level D rookies can turn into level A veterans. Each level grants a unit ten additional hit points, no matter their initial health. While a drop in the bucket for a battleship with 240 hit points, a low-tier Gundam can double its health this way.

More important are the bonuses to defense and damage. Some units become so resilient that they will only ever take a single point of damage from weaker units, allowing them to absorb entire squads of foes. The AI has no good answer to this problem. Like the player, it is limited to 16 units, so overwhelming them with numbers is not an option. Later on, the AI starts maps with experienced high-tier units, but only ever replaces them with basic Gundams – an arms race it is bound to lose. Nevertheless, the campaign does offer a decent challenge for those who do not optimize every aspect of their army and avoid save scumming their way through battles.

More interesting than the actual mechanics of SD Gundam Winner’s History are the campaign maps and its structure. The first three space maps are always identical, but from the fourth map on, players can take one of three paths, depending on how fast they finish the third mission. The three paths overlap later, allowing the player to switch from one to another. The basic route will be the same: the campaign starts in space, then moves on to Earth, then back into space, to the Moon, and to one of two final maps.

How a map is completed determines what maps comes next. Almost every map can be completed by wiping out all enemy forces. Other objectives include capturing specific structures, destroying a single unit, or reaching a certain spot on the map. Interestingly, the developers decided to push the player into one specific path. Reaching the others is somewhat tricky; one path requires specific preparations over the first couple of maps.

Like the player, the AI sometimes has multiple victory conditions too. For example, in one of the two final maps (which are not viable for skirmish or multiplayer), the player has to prevent the Master Gundam, a unique and especially powerful Gundam, from reaching Earth.

While the AI in SD Gundam Winner’s History does pursue these objectives, it is otherwise not particularly sophisticated. All AI units will always do one of three things: move towards the nearest player unit and attack it, capture the nearest structure, or defend a structure. Initially, this makes the AI seems somewhat aggressive and dangerous, but after a while, it becomes somewhat predicable. On the plus side, AI moves are calculated quickly and executed almost without delay. There are games that allow players to make a sandwich in the time the AI needs to think, but SD Gundam Winner’s History is not one of them.

Another weakness of the AI is its handling of Gundam-on-Gundam battles. More often than not, the AI moves its Gundam slightly up right at the start of the battle. This may sound like a minor quirk, but it allows the player to fly right up to the opponent and start slashing away. The AI will generally answer this by drawing their own sword – which cannot hit the player Gundam from this angle. A surprising amount of battles can be won this way within seconds and with minimal casualties.

Unfortunately, tactics like this and the general superiority of battleships over Gundams means that many features of SD Gundam Winner’s History can more or less be ignored. There are battlefields with gravitational pulls or other environmental effects, but they hardly come into play. Likewise, many of the specialist Gundams have no application outside selected two-player matches. The water-based Gundams, for example, move at a snail’s pace on land and in space, and only excel on a map or two. There is little incentive to drag them through the entire campaign.

Equally mixed is the sound. The tracks used are pretty decent (especially the title theme), but for the majority of the time, all a player is going to hear are the player and the enemy themes, interrupted by short bursts of the battle music. Even for a handheld game, the musical selection is shallow. More convincing are the graphics. The map tiles can be a bit monotonous, but every unit has its own icon and sprite – even if some look a bit odd, like the toilet-shaped Master Gundam. After a while, a player will be able to identify most units at a glance, which is a very good feature in a strategy game. More attention than the tiles got are the battle screen backgrounds, of which there are many. A factory on the moon will have a different background than a city on land, which is distinct from a forest, a space port, or any other tile type. It is almost a shame that battles are comparably short, giving player little time to admire the effort that was put into these backdrops.

The branching campaign and the five factions – as similar as they are – offer a fair amount of replay value. Especially vigilant players can even find a handful of secrets, such as the Shining Gundam – an especially powerful Gundam hidden on some maps.  Should the Shining Gundam survive all the way to the end of the game, a secret ending is unlocked and a fight between Master and Shining Gundam is shown. Otherwise, the story of SD Gundam Winner’s History has little to offer. It boils down to blue-tinted guys fighting red-tinted guys, with mission briefings being as exciting as “The colony has been attacked!” or “The enemy army has ambushed us!” Even the credit-free ending merely states that the red faction has been defeated and retreated into deep space. Notwithstanding, SD Gundam Winner’s History is a decent handheld strategy title, and playable even without knowledge of Japanese. It is unknown how successful it was, but fans liked it well enough to give it an English translation.