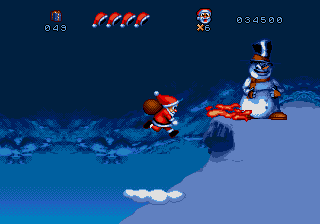 In the early 90s, Norwegian developer Funcom made their trade with licensed platformers based on animated films (Disney’s Pocahontas, A Dinosaur’s Story) and ports of arcade hits (Samurai Shodown, Fatal Fury Special). However, they also made a couple of original games, such as obscure holiday-themed platformer Daze Before Christmas. It only came out in Australia and Europe, and received fairly middling reviews at the time. Although it’s not quite a hidden gem, it’s a solid, easy romp if you’re in the mood for some simple festive gaming.

Before setting off to deliver the presents for Christmas, Santa Claus has himself a brief nap. Unfortunately, a dastardly gang led by the Awful Louse steals all the presents and curses the toys to attack anything in sight. Waking up to realize what’s happened, it’s up to Santa to recover the presents, defeat the gang and give gifts all around the world.

Daze Before Christmas is a platformer where your goal is to reach the end of the stage, which is indicated with a shining star most of the time. You’re able to run, jump, duck, climb up objects, and swing from ropes to get around, and you can take out rogue toys with projectile magic or by jumping on them (though you have to press the jump button while in the air, similar to Castle of Illusion). 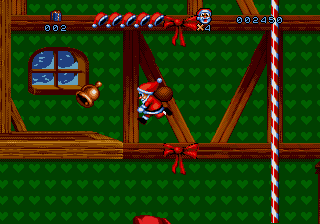 Defeating them leaves behind presents, which you can grab and deliver to children in bonus stages after every boss fight. These have no real purpose beyond giving you extra points, but they make for a nice change of pace. Other types of presents can also be found within the stage, either releasing trapped elves or giving you pickups such as Santa caps that restore your health, extra lives and checkpoint bells.

Every now and again, you’ll find coffee cups that will turn out into Anti-Santa, a furious alter-ego who’s invincible and can take out giant stone golems blocking your path. However, you can’t pick up or open presents while in this state, so you’ll have to decide whether it’s worth the temporary advantage. If you want, you can change how long he lasts in the options menu, with a choice of 10, 20 and 30 seconds.

You can also make other changes in the menu, such as mapping your buttons and changing the difficulty, which affects your lives, the appearance of certain enemies, and even how much health you start off with. This is quite welcoming, as it lets you adjust the experience to your liking – whether you’d prefer a more relaxing time or, maybe more likely, a more challenging one.

Daze Before Christmas is quite easy, with mostly straightforward linear levels, bosses that can be figured out and beaten quickly, and even unlimited continues at your disposal. Some stages can be a little tougher, forcing you to escape rising water or navigate a maze-like layout, but it’s otherwise a fairly breezy experience. The only big hurdle comes from how you only receive passwords after beating a boss every few levels, meaning you’ll have to beat a bunch of them in one go if you want to retain some progress. (Inputting the passwords is rather annoying, as you have to scroll through every letter and number individually by mashing a button to go forwards or backwards.)

As such, it can come off as a bit dull compared to more complex or challenging platformers of the day.  However, there is something to appreciate about a basic game you can play without being taxed too much, particularly when there’s plenty to enjoy besides. Stages offer a variety of platforming and exploration, which are brisk enough that they don’t outstay their welcome, and the responsive controls ensure you can overcome the obstacles while enjoying yourself.

This is complemented by the presentation, which presents a game that both looks and sounds great. The characters are given a bit of personality in their animation, colors are deliberately used to create pleasant looking stages while ensuring that all onscreen elements can be clearly, and levels are introduced with lovely title cards unique to every stage. The game does reuse level themes after the halfway point, though that’s rather impressive given there’s 24 stages on offer (presented through an adorable advent calendar). 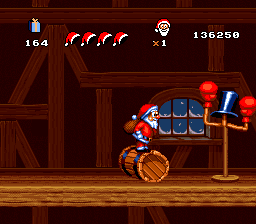 Meanwhile, the soundtrack composed by Kim M. Jensen & Geir Tjelta is very good, featuring a mix of Christmas standards such as “Jingle Bells” and original pieces. The instruments are nicely arranged with an almost jazzy flair thanks to the keyboard chords and soft basslines, and the upbeat feeling fits the breezy, cozy mood of most stages (while the more somber levels get aptly moodier music). Each track also goes on for a surprising while, usually lasting at least two or three minutes before looping back round. In terms of the sound design, it utilizes sampled speech clips along with the usual selection of sound effects, both of which work well enough but aren’t particularly remarkable.

Daze Before Christmas suffers a strange history. It was announced for release in the US for December 1994, but it was shelved after a brief initial production run, though it did release exclusively in Australia. This was due to publisher Sunsoft USA’s bankruptcy, which also resulted in the SNES port only coming out in Australia and Europe. Because of that wider release, the SNES port is much better known, and generally assumed to be the default version.

But it is a port, and one that at first glance seems practically identical to the original. Because both versions were developed in parallel, with any progress in one version being programmed over to the other, they share the same level designs and most of the graphics (apart from differences in color depth and a handful of redrawn backgrounds). The soundtrack has received a few changes, utilizing the same tunes but rearranged with new instruments and often in different keys. Some arrangements are identical while others go in new directions, like the much peppier take on the Toy Factory theme. It creates a different vibe, but it works equally well within the game and serves as a nice reinterpretation of the original music.

Unfortunately, there’s a major flaw with this port. The SNES has a smaller screen resolution of 256×224 (compared to the Mega Drive’s 320×224), and because the graphics haven’t been resized to account for this, it means that your field of view is much smaller. The left and right sides of the screen have been mostly cut off, which makes it hard to see what’s coming ahead and turns many platforming sections into leaps of faith. While this does make for a more difficult challenge, it’s for unfair reasons that also render the game as feeling more slapdash and cheap than it actually is.

Due to the game’s obscurity and rarity, trying to buy a physical version of either port is outrageously expensive, going up to hundreds of dollars for a cart. As such, you’re better off emulating the game, and you may as well go with the Mega Drive original as it’s the fairer of the two.

Daze Before Christmas utilizes some of the development assets and libraries used to create the Mega Drive platformer A Dinosaur’s Tale, which Funcom developed as a tie-in to the 1993 animated film We’re Back! A Dinosaur’s Story. But aside from sharing some HUD elements and a general sense of physics, they’re very different platformers with little in common.

An interview with Olav Mørkrid, who programmed the SNES port: https://www.arcadeattack.co.uk/olav-morkrid-daze-before-christmas/

Known contemporary reviews for Daze Before Christmas, from lowest to highest: