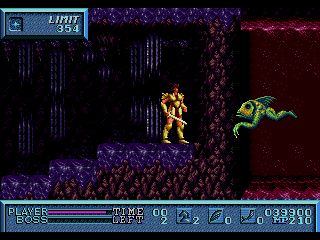 There aren’t many Genesis games like Saint Sword. A collaboration between Taito and Cyclone System, a short-lived developer whose games were ambitious and original but always a little rough, it’s a side-scroller in which each level functions as a mini-maze. Levels are relatively large, and scroll in all directions; in order to solve each of them, you must find a key and the door it unlocks. The key is always held by some common monster that usually hangs around a pre-determined part of the level, so the moment-to-moment gameplay consists of exploring every area of every level while killing everything that moves. There’s a bit more to this, however.

The Saint Sword of the title is not some sacred weapon destined to vanquish evil, but a title bestowed by future historians to the hero of the game, otherwise known as Macress. Though he looks human, he is part of a shape-shifting race called the Titans – the last Titan, in fact, to possess magic as strong as the Titans of long ago. A thousand years before, humans had formed alliances with the powerful Titans in order to rid themselves of Gorgan, an evil sorcerer who ruled over them as a despot. The long peace that followed his defeat had weakened the Titans, however, and when he finally returned, only Macress could stand in his way… 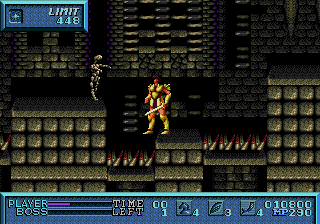 Throughout the game, you collect animal icons from defeated enemies, which you can then use to take on different forms. As a centaur, you gallop at high speeds and jump far and high; while useful in a few set situations, using it during regular gameplay is risky, as it tends to run into enemies and obstacles and the huge sprite makes it an easy target. The angel, of course, can fly, letting you get around with ease while avoiding grounded enemies. Dragons can usually be found flying at the very top of most levels, and killing them often nets you healing items. Finally, the merman form lets you swim faster and replaces the regular sword swing with a more precise stabbing motion. You can stock up to five of each icon, and a transformation last 60 seconds; a timer counts down the seconds left, so you can simply use another icon before you run out if you want to remain in that form a while longer. In general, there’s plenty of them to be found. 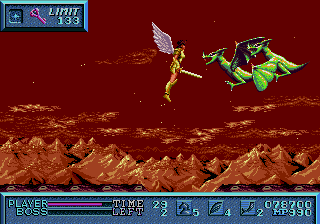 But that’s not all Macress can do. After every boss battle, you gain a new magic, which you can select by pressing start and set to the A button. They range from a mirror that lets you generate transformation icons to a horn that instantly kills all enemies on screen. The last spell you get lets you fully heal yourself. Using these cost MP, which you accumulate by picking up items dropped by certain enemy types. Though you start with a spell that lets you shoot energy balls from your sword, you first need to find some MP before you can use it.

Finally, there’s something like a simplified level-up system. Score also acts as experience points; as you accumulate it, your armor first turns red, then golden, accompanied by a large increase in power each time, and these power-ups carry over when you transform. Once you die, however, you go back to normal. While it doesn’t take too long to reach the Golden form, it’s much harder to do so in the final levels. Considering you have infinite credits and a password system, it’s about the only way in which the game retains a bit of challenge. There are technically time limits to each stage, but if you’re systematic in your search, they should never be a threat. 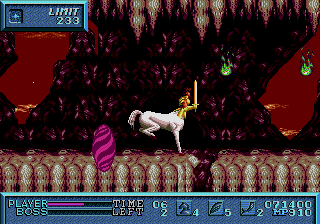 The centaur can also kick enemies with its back hooves.

No matter what form you’re playing as, the hit detection is quite loose, and attacks don’t have to actually touch a sprite to register. While this affects you and enemies equally, it makes the action feel a bit shoddy, at least until you get used to it. For whatever reason, this doesn’t affect the merman form. The character is otherwise fast and responsive, so it’s unfortunate that this one aspect couldn’t be corrected.

For the first three “chapters”, a boss battle follows each level. In general the bosses are designed to be fought in a specific form. Usually it’s the angel – you can’t beat flying to dodge attacks – but there’s a fight with a giant sea worm for the merman, and a duel with a speedy centaur that can easily be trapped in a corner if you turn into a centaur yourself. They’re usually extremely easy, but a few of the bosses are only vulnerable in specific spots for short moments, without much in the way of logic or visual cues to guide you, resulting in battles that can be annoying and confusing the first time around. 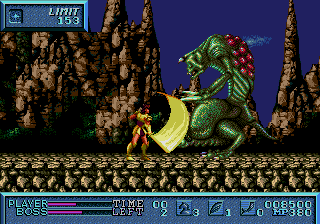 The first boss is the worst, as it only seems to take damage when it wants to.

From Chapter 4 on to 7, there are two levels per area. Considering how long each level can be, this considerably slows down the pace, and though the game begins throwing in obstacles like spikes on floors and ceilings and venomous plants, it really starts to get repetitive. In the cemetery level, crosses tear themselves off their tombstones and fly at you. The two Chapter 7 levels aren’t really mazes at all, but linear side-scroller levels, which, at that point, is refreshing, and finally, you get to Gargon. The battle is possibly the easiest yet, but then, surprise: 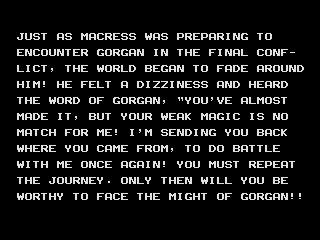 Ironically, the very weak Gorgan thinks he’s too good for you, and sends you right back to the first level with your magic gone. The game is a little harder and a little darker the second time around. Blue water has turned blood red, brown cave walls have almost turned black. Stronger enemy types appear earlier, and old enemy types gain new attacks. The bosses are still easy. Beat Gorgan again, and he reveals his true form, which is the closest the game has to a legitimate boss battle. It’s still nowhere as hard as the swarms of regular enemies in the level before. Of course, running through the game twice in one session is a bit much, so it’s nice that the passwords don’t run too long, though you have to lose a credit to actually get one. 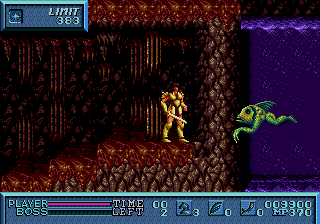 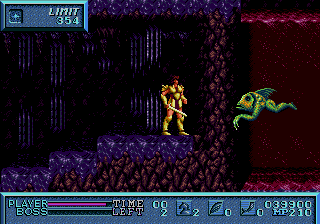 The graphics are about average for an early Genesis title. Macress’s large, realistically-proportioned sprite is reminiscent of Altered Beast, another game with a transformation gimmick, and some of the bosses and larger monsters look pretty cool, but the environments are often a little grainy. The skies look great, and the outdoor levels are generally nice, but you’ll spend far more time exploring caves and castles. There, the color schemes tend towards muddy browns and grays, though they do benefit from the more sinister atmosphere in the second loop.  The soundtrack is similarly unexceptional for the most part. The intro and ending themes are quite nice, as are maybe two of the level themes, while the rest is just there. Though the game doesn’t say, some sources credit composer Toshiko Tasaki, who went on to work on a number of Shin Megami Tensei spin-offs. 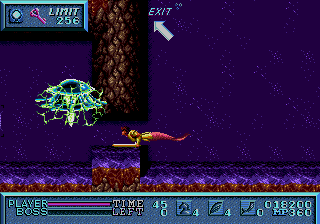 One of the more impressive enemies.

The Japanese version is almost identical to the North American release, complete with fully-English intro and ending, minus a few corrections in the text and a nicer logo. Even the Western-style fantasy illustration on the cover was used for the original, rather than commissioned to replace a more anime-influenced illustration, suggesting that Taito had an American audience in mind.

In the end Saint Sword is roughly as flawed as it is interesting. It’s fun to play as an angel or a centaur, and the maze-like levels are compelling in the beginning, but it drags in the later stages, and the fighting could have used some tweaking. It stands out among console platformers, at least; it feels like a Japanese take on Psygnosis Amiga games like Shadow of the Beast and Leander (known as Legend of Galahad on Genesis), though whether that’s deliberate is anybody’s guess. It was the last original title Cyclone System worked on; following that, they did some work on the Genesis port of Taito’s Cadash before folding in the early ’90s. 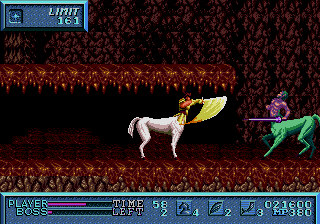 Two centaurs on-screen at once? What is this, a Shining Force spin-off?

Segaretro.org has a TV ad that played on Japanese television and scans of the manual.

The GDRI has an English interview with Shouichi Yoshikawa, a former game designer at Cyclone System, Aicom, and several other lesser-known companies.