Developed by Namco in 1987 and published overseas by Atari, Dragon Spirit is essentially an updated version of their classic overhead shooter Xevious, but replaces the overdone sci-fi theme with a fantasy setting. Instead of piloting a tiny little spaceship, you control Amul (or Amru, in the NES version), a human soldier who’s transformed himself into a huge fire-breathing dragon, flying over volcanos, jungles, and glaciers, and through the depths of the ocean. All of this is to save Alicia (or Arisha), the princess of the kingdom of Mitgult (should be Midgard.) Along the way, you fight hydras, giant spiders, and venomous plants, culminating in the final battle with the evil snake-thing Zawell. Even though the shooter genre was still in its teenage years back in the late 80s, these changes alone made Dragon Spirit a bit of fresh air. And besides, in what other games can you get attacked by squadrons of evil flying squirrels and rain bombs upon malicious walruses? 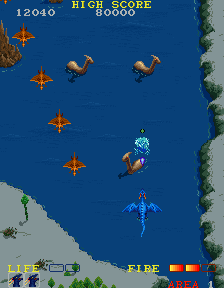 Despite its setting, very little has changed from Xevious, despite the obvious graphical and auditorial enhancements, due to it running on the Namco System 1 board. In addition to standard fire shots, which attack enemies in the air, you drop short range bombs to attack enemies on the ground. Where Dragon Spirit deviates a bit is with the power-ups. After collecting three red orbs, your firepower will become enhanced. Even cooler, if you grab a single blue orb, you’ll grow an additional head, allowing for a wider double shot. Collect another blue orb, and you’ll grow a third one, effectively turning you into a death dealing monster. Dragon Spirit also grants you a life gauge, albeit a small one. You’ll be able to take between two to three hits, depending on the arcade setting, although most of the home ports let you take three. Still, the game’s kindness is pretty deceptive, because the penalties for taking damage are harsh. Your firepower ranking will be downgraded, and you’ll lose one of your extra heads. Plus, you’ll be taken back to a checkpoint should you die.

There are also a number of additional dragon forms, which are triggered by a few special orbs scattered throughout the game. These include a dragon that fires a series of homing shot, a dragon with a wide spread shot, and a mini-dragon which allows you to easily evade bullets. These additional forms are pretty rare though, and some only last for a limited time. 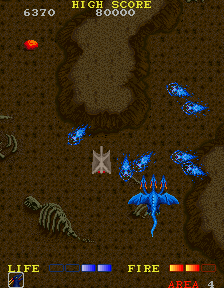 Indeed, Dragon Spirit is almost deliciously cruel. The difficulty is particularly brutal, even in the first stage, with waves of enemies constantly flying at you or littering the screen with bullets. Your dragon is also a relatively huge target, especially with three hits, making it particularly susceptible to fire. The overly long stages coupled with the checkpoint system also makes progression rather tedious, unless you’ve memorized exactly when and where each troublesome foe will pop up. Heck, the game’s even stingy with extra lives. You need to collect three egg icons, which slowly hatch to form an extra dragon icon at the bottom of the screen.

The graphics in the arcade version are pretty decent for their time, and hold up pretty well, even if there aren’t any particularly fancy effects. However, the opening segment, where a lone human figure climbs a demonic mountain, holds his sword to the sky, and transforms into the legendary Blue Dragon still manages to maintain its dramatic weight years after its release. Additionally, the soundtrack has stood up amazingly well. Composed by Namco mainstay Shinji Hosoe, the FM synth tunes are remarkably catchy, alternating between incredibly upbeat melodies and brooding dark rock themes. (Hosoe is usually known for Ridge Racer and various Beatmania remixes, but he returned in the shooter scene in 2005 with his fantastic scores for Cave’s Ibara and G.Rev’s Under Defeat.) 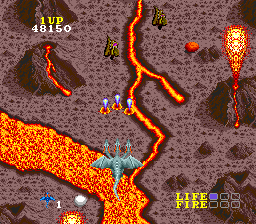 While its difficulty remains soul crushing throughout most of the game – and with nine full stages, it’s quite a long journey – the arcade version of Dragon Spirit remains something of a classic, as its still an attractive and well made shooter. However, it’s more well known for its home ports, especially outside of Japan. 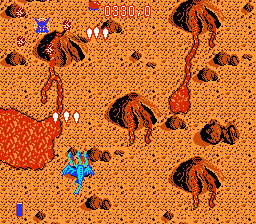 The NES version, similar to many Konami arcade ports, has a number of changes and enhancements, earning it the subtitle “The New Legend”. Namco tried to edge a story in here, with a new intro and ending, along with small cinema scenes between each stage, showing each of the girls that you’ve rescued. The idea is, you’re supposed to be playing as Amul and Alicia’s son. There’s a whole new prologue chapter that’s actually pretty clever – it’s a small level, filled with power-ups and a single, easy boss fight again Zawell, but this acts as a barometer for the rest of the game. If you lose this portion, you end up playing as the Gold Dragon. This is basically the game’s Easy mode, because the Gold Dragon is significantly more powerful, with full rapid fire and six hit points. However, you can only play about half of the stages, before it ends with a goofy little “bad ending” with cutesy characters proclaiming it was all just a dream. If you win, you play as the Blue Dragon, which is the game’s Normal mode, and sends you through all nine stages. 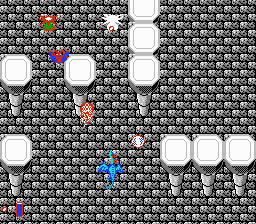 Most of the levels are based off the arcade game’s stages, but the layouts and enemy patterns have changed. Some have additional obstacles – for instance, the third stage, the jungle, has thickets you need to shoot through. In the sixth stage of the arcade game, you need to shoot through glaciers. In the NES version, the game speeds up and you need to weave between thin corridors while shooting out the ice, similar to the ending sequence of Salamander / Life Force. In the eighth stage of the arcade game, the Dark Zone, your dragon has a small headlight (??) that lets you see enemies directly in front of you. In the NES version, the lights simply flicker on and off. There are also a few completely new areas and final bosses at the end too, including the new main bad guy, Galda. 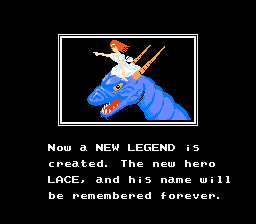 There’s more than just the expanded content though. The NES version just feels different, as it runs at a slightly faster speed. There are less enemies, and your dragon is much smaller, even when powered up. And the hitbox is smaller still, so bullets can graze your wings without killing you. Power-ups are also much more common, and there’s an extra item that creates two mini-dragon options that fly at your side. As a result, it’s a much friendlier, much more playable game. The graphics have obviously been downgraded a bit, with plenty of flicker and slowdown, and the soundtrack loses a lot of its flair in the conversion. Still, the extra stuff more than makes up for it. 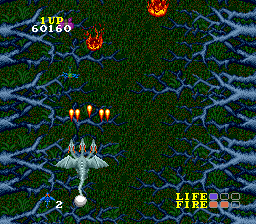 The TurboGrafx-16 port is much closer to original arcade game, with graphics and sound that hold up pretty well, and even looks a bit brighter. However, after the sixth stage, much content has been cut. At that point, it completely removes the 7th (underwater) and 8th (dark) stages, replacing them with two new castle-like stages similar to the 9th stage of the arcade game. It’s slightly easier, as the enemies are a bit less aggressive, but the huge size of the dragon and unforgiving hit detection still make it rather brutal. In the arcade game, a bullet could graze your wing and you wouldn’t take damage, but not here. Technically you don’t get any extra credits, but there are codes that allow you to continue where you left off. The resolution is cropped for 4:3 display – you can put it in “arcade” mode by soft resetting it 57 times, but all it does is letterbox the screen on the sides. It doesn’t actually display any more of the playing field. The TG-16 version also removes the intro cinema – even the NES version had that!

There are a number of computer ports too, all developed by Domark and published by Tengen, featuring weird sci-fi inspired art for its cover. The Spectrum and Amstrad versions are both pretty similar, except the Amstrad one runs in full color, and runs choppier. The C64 version lacks music and has a really cramped screen, but despite its compromises, actually plays okay. The Atari ST and Amiga versions have cool renditions of the main theme at the title screen, but is silent in game. Graphically they’re about the same and look the closest to the arcade version out of all of the ports, though they’re not as nice as the TG16 version, nor do they run as smoothly. The Atari ST version has the status bar on the right side of the screen like all of the other computer ports, but the Amiga has it at the bottom. Strangely, the huge dragon icon in the lower right corner actually blocks the view of that part of the playing field.

For a long time, the best available ports were for the X68000 (developed by Dempa) and PlayStation, as part of the Namco Museum Vol. 5 collection. The X68000 version is nearly perfect, and even runs at a resolution closer to the vertically oriented monitor of the arcade original. The PlayStation version has an option to put bars on the side of the screen so it closer to the correct resolution, or allows you to rotate your TV. Emulated versions also appear on the Namco 50th Anniversary Collection, released for the PlayStation 2, Xbox, and PC. The console versions lack the ability to continue, which is still present in the PC version. It’s also included in the Japanese version of the Namco Museum Vol. 2 for the PSP. The arcade version of Dragon Spirit also shows up on the Namco Museum Virtual Arcade for the Xbox 360. The emulation isn’t quite as good as it should be, because there’s quite a bit of slowdown during the hairier moments.

There are also two versions of Dragon Spirit in the arcade – the “Old Version” and “New Version”. The Old Version has a brief section before the first level, which is skipped over in the New Version. However, the New Version offers a level select at the beginning of the game. The dragon also moves faster in the New Version, and there are other small things altered here and there. The X68000 and PlayStation ports let you pick the version, while the versions featured on the Namco emulations all use the New version. The Virtual Console version uses the Old version. 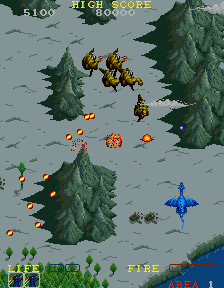 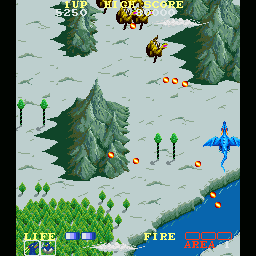 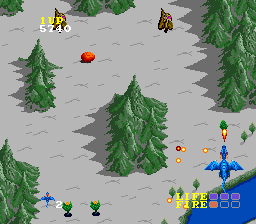 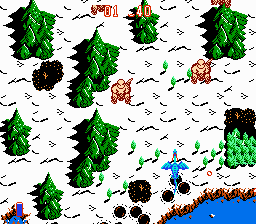 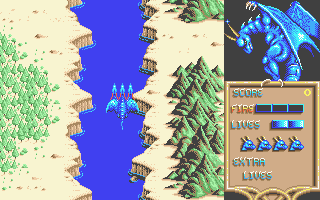 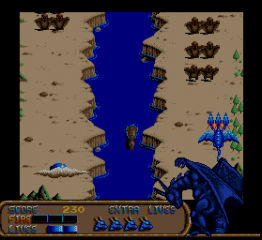 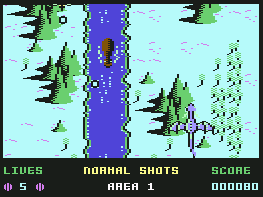 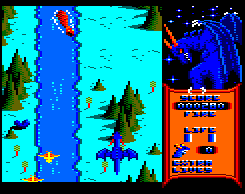 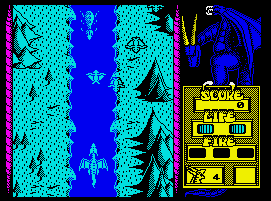