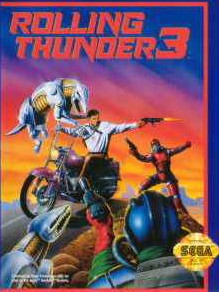 Rolling Thunder 3 is the first (and only) console exclusive title of the series, and some changes were made from the prior entries to make everything seem more manageable. You now start with three life marks, so you can actually take more than one bullet before you die, and you resurrect where you died rather than going back to a checkpoint. Even nicer, you can both jump and fire at the same time, and shoot diagonally upwards. The time limit is gone, though a sniper will pop out to attack if you dawdle for too long. There’s an additional attack button, so you can choose if you want to use your special weapon, or stick to your pistol, in case you want to conserve ammunition for the more powerful attacks. If you don’t have a special weapon, this button triggers a knife attack, for close quarters combat. 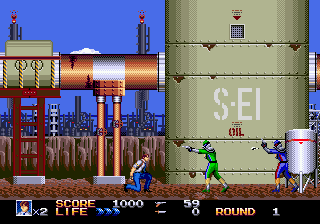 The arsenal has been greatly increased. There are nine weapons that you can arm yourself with at the beginning of the stage. Once you pick this weapon, you are unable to select it again for the rest of the game, so you need to vary up your selections. These include lasers, shotguns, flamethrowers, artillery cannons and a variety of grenades, including flash grenades to blind enemies. These extra weapons make your attacks far more versatile, considering that you can now attack enemies from behind barriers by chucking grenades over them. You start off most stages with a decent amount of ammunition, too, so you’re rarely underequipped.

All of this taken together, of course, makes the game easier…but only easier in the context of the other games. It is true that it doesn’t feel very “Rolling Thunder”, since you don’t need to replay each and every section to sneak past undamaged, but it is also much less frustrating. It can still get quite difficult, since you still need to restart stages from scratch when you lose all of your lives, and the small handful of bosses are quite difficult. There is an unlockable hard mode which only gives you two blocks of health and amps up the number of enemies, though the instant respawns and large arsenal still makes things easier. This mode also changes the color palette of the levels to different times of day, making the experience look a little fresher. 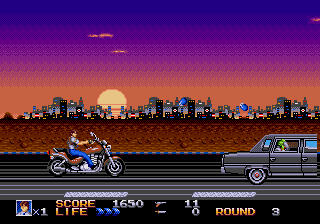 Unfortunately, the two player mode has been cut entirely, and Leila and Albatross are no longer the main characters. Instead, you can only play alone, with a rather dull agent named Jay. (A code will allow you to play as Ellen, Jay’s female assistant, who converse with him during cutscenes. His mission is to hunt down a villain named Dread, the second-in-command from the Geldra group from the original Rolling Thunder. The adventure takes him around the globe, starting from oil rigs in California, to the streets of Las Vegas, and then onto Easter Island. There are two vehicle levels, as you ride on a motorcycle down the California/Nevada highway, and on a jet ski across the Pacific Ocean. They aren’t particularly great, but are short and unoffensive. There’s also a clever fakeout after the eighth stage, where it seems like you’ve taken down Dread, only to have your plane ride home hijacked by terrorists. This makes for two more levels before the final confrontation with the true Dread. Who, as the cutscenes show, looks like Maboo, but with a silly monocle.

The third episode was never ported to any other platform, and never re-released in a compilation or digital download service. It was never even released in Japan, for that matter, since it seems like the series was more popular in North America than it was in its home country.

For as influential as it was, it’s a little unfortunate that the Rolling Thunder series doesn’t command the same respect as other games of the era, like Shinobi or Contra. The Rolling Thunder games were the archetype of the 8 and 16-bit eras – tough side-scrollers that demanded precision and mastery to get anywhere. While the original is just a little bit too hard, both of the Genesis games are some of the better action games on the platform, and well worth investigating. 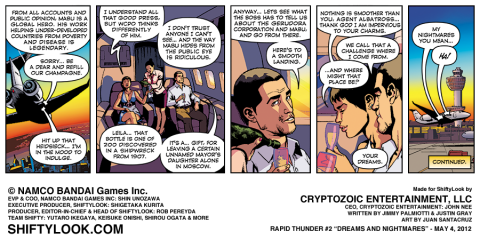 Online publisher Shifty Look teamed up with Namco to produce a number of comics and videos based on their classic arcade properties. In 2012, they published several short strips dubbed Rapid Thunder, as an homage to Rolling Thunder. It’s essentially just a basic spy story, with no real connections to the actual game. There are only some name drops from the original series, like the heroes being codenamed Albatross and Leila. And even then, many transliterated names differ from versions used in the previous games. “Maboo” is now “Mabu”, and “Geldra” is the awkward “Gerudora”. The last strip was published in October 2012, and was seemingly dropped before finishing the story.