After the considerable mediocrity of the first Rushing Beat, Jaleco somehow decided to make a sequel, but improve upon it in nearly every conceivable fashion and give it a more identifiable personality than just “totally-not-Cody-and-Haggar fight the totally-not-Mad-Gears.” The end result was Rushing Beat Ran, known to America as Brawl Brothers with another decidedly embarrassing cover, and in some European countries as Brawl Brothers: Rival Turf 2. 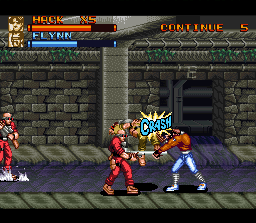 Set an interminable amount of time after the first game, Rick Norton and Douglas Bild now apparently run a gym, though whether or not they’ve retired from the police force is ambiguous. This time around, an enigmatic mad scientist known as Iceman (or Dieter in Brawl Brothers) unleashes an army of clones onto the land from atop his airship “Adler.”

The hero of the first game returns!

The other hero of the first game returns! 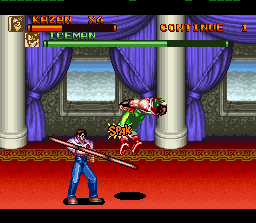 Thankfully, these three newcomers’ names are not affected by the localization process, but Norton and Bild DID get altered once again, now called Hack and Slash respectively. Seriously, that’s just… overlooking the localizers’ propensity for bad puns, the enemy names are all changed again to make them sound a bit more urban, but interestingly enough, their Japanese names mostly sound less like actual names and more like test subject numbers. For example, the basic punks are labeled K-M308 in Rushing Beat Ran, whereas they’re just known as “Zero” in Brawl Brothers.

All five characters are available from the start, a good diverse roster for one player or two. Interestingly, even if playing solo, you still select a second character for reasons that don’t become apparent until you face any of the game’s bosses. Basically, the three characters that you do not choose are kidnapped by the terrorists and brainwashed, and in order to get them back to your side, you have to beat the snot out of them. Yep, your heroes are also the game’s bosses, with each “evil hero” having moves that you can’t normally perform (Bild spits fire, Wendy dives off of a rope and attempts to body splash you, etc.). This adds to a bit of replay value in addition to simply going through the game with all five characters, though you can switch to other characters (though only ones you’ve rescued) in between the four stages. Aye, there are merely four levels, which may not seem like much today, though there were only four levels in the original Double Dragon. That being said, these levels are actually pretty damn long and have an increasingly large amount of enemies with which to deal. 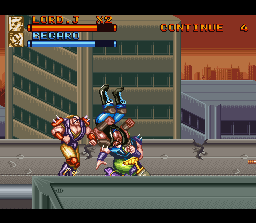 Rushing Beat Ran plays much smoother than its predecessor and feels less like a Final Fight ripoff, having acquired its own feel through improved aesthetics and a bit of a comic book feel to it. The whole “cyber-clones” premise is fairly ridiculous, even though there’s as much story in this game as in its predecessor (that is to say, almost none). Still, the setting promises and delivers on a not-too-distant-future aesthetic to most areas, and onomatopoeia phrases appear as you punch into enemies like “CRACK” and “SLAM.” The graphics are brighter than the first game and animation is a bit less choppy, and the soundtrack’s actually respectable this time around. The instrumentation is better, the tracks are less repetitive, and they’re generally more upbeat. On top of a better appearance, the gameplay is more fluid, faster-paced, and better balanced. All five characters play rather differently, with Norton being the best balanced, Kazan favoring blinding speed, Wendy being fast but strong and stylish, Bild hitting like a Mack truck, and the lethargic Lord J doing lots of damage with judo throws. As expected, this game is at its most fun if you have a buddy on the second controller, seeing which combinations of characters work best in action. However, the overall game is still quite fun even solo, more than can be said for the first Rushing Beat.

Everyone has the same basic moveset: Punch combos, grabs and throws, jumping attacks, dash techniques (with dashing done via the standard “tap forward twice” method instead of holding a shoulder button), and the invincible “get off me” specials. The Ikari mode has carried over from the previous game and functions basically the same way: Take enough damage and you glow with increased strength and invincibility, with your throws in particular augmented to superhuman levels of power. Your lifebars don’t deplete as quickly as in Rushing Beat, and your bailout attacks conventionally take a bit from your lifebar this time instead of a separate point counter. The enemies can get fairly aggressive, though you generally have a bit more space to move around than RB. You can immediately stand downed enemies up by attacking right next to them, allowing you to potentially keep them in a punch loop so long as you don’t get distracted by enemy mobs. It’s usually preferable to fight empty-handed, though weapons do pop up every now and again that you can either throw for one use or smack enemies multiple times (or even throw the bigger weapons around with the shoulder buttons). RBR is a rare brawler that allows you to use a rifle for infinite uses until it gets knocked out of your hands, though the shots are a bit slow and not too powerful. There are also helpful health items (soda, chicken, first aid kit) that you can actually carry with you and use at any time, so long as you stick to using jump attacks and throws. Hilariously enough, you can even bean enemies with health items for minor damage. 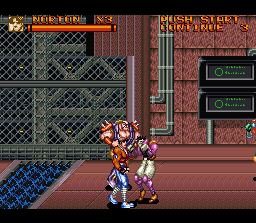 There’s a bit more creativity in enemies this time around, where baddies look less like street trash (as they did in Rival Turf!) and more like terrorists and/or cyborgs, like the masked pencilnecks who comprise cannon fodder. Common enemies which sport infrared goggles actually carry guns, which is odd considering how most brawlers tend to exclude firearms, though they’re usually slow and not too damaging. More obnoxious masked enemies tend to spam shoulder charges and sliding kicks, and these jerks who pilot powered armor (somewhat akin to the famous Power Loader in the final scene of Aliens) will grab and shake you for considerable damage. Large “Mongolian road warriors” are the most threatening enemy, though they thankfully don’t appear until halfway into the game. As with the first Rushing Beat, there could perhaps be a bit more enemy variety, but what’s there is challenging enough. The aforementioned “evil hero” bosses are fun (yet tough) fights set to a kickass boss tune. The final boss, Iceman, may look like a bit of a dork, but his lifebar is three times the size of the other bosses, he swings around a three-piece staff to remain nearly invincible, and when you break the staff, he spams roundhouse kicks and releases some sort of spirit projection ripped right out of Jojo’s Bizarre Adventure. In other words, a typically cheap final boss who takes a few lives to defeat.

Rushing Beat Ran is simply a far superior product to the first Rushing Beat, and all it had to do is be less derivative. It’s still not a wildly original beat-em-up, but it at least does far more than lazily copy Capcom’s style. It’s not the absolute best of the genre, due in part to some occasionally drawn-out level design (particularly the lengthy rooftop stretch of the third level), and the AI can still be a bit unfairly vicious even on the lower difficulties (like the Mongolian road warriors being able to grab you too easily). Regardless, it is less of a chore to play than the first Rushing Beat and allows you to adjust lives, continues, and difficulty in both the Japanese and American versions of the game. There’s also a versus mode like the last game, considerably more enjoyable this time around now that there are five heroes in total instead of merely two. It doesn’t take place out in space, though, simply in the urban wrestling arena in which most of the boss fights are set. RBR stands out as one of the finer beat-em-ups on the SNES and a must for anyone looking to take out aggression, one-or-two-heroes-against-the-world style. 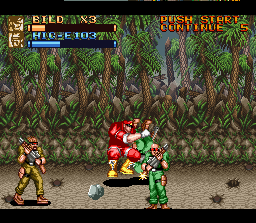 When the game came out over here as Brawl Brothers, all enemy names were changed (as well as the aforementioned embarrassing “Hack” and “Slash” crap with Norton and Bild). Plus, the title itself is pretty dumb, considering one of your “brothers” in question is female. Other than that, all aspects remain intact, but two specific areas (the sewers of the first level and the gym/underground base of the third level) have actually been restructured to be less linear. The sewers are subdivided into four lettered sections that require you to travel through various doors in the background until you reach the ladder at the end. The gym/base now has lots of elevators with various floors that you have to explore until you reach the end, somewhat akin to the harrowing penultimate stage of Streets of Rage 3 (albeit without any time limits). These redesigned areas arguably add a bit more of an original structure to the standard “walk-in-one-direction-and-punch-guys” formula to which the Japanese version adhered, but others may feel that these areas are frustrating to navigate and feel like padding, with this exploration element slowing down the otherwise fevered pace of action. Awesomely enough, the American version can be transformed into the Japanese version by an obscure code: Keep pressing B>A>X>Y in that order on the Jaleco logo, and when you see a glitchy title screen, press start, down three times, and start to reach the options menu. When you exit it, you’ll find the title screen says Rushing Beat Ran instead of Brawl Brothers. It would be nice if such a code were possible with The Peace Keepers, as Rushing Beat Shura clearly beats the pants off of it, but at least this code for RBR allows gamers to determine which is the better version.