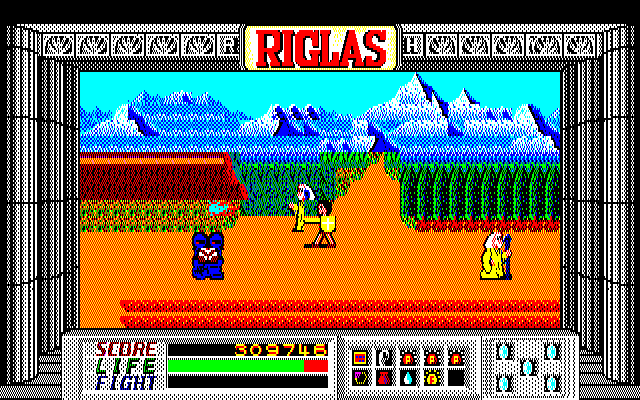 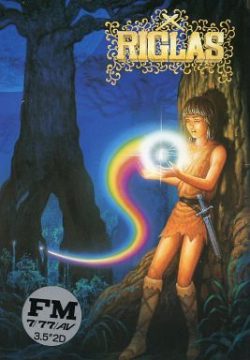 Most RPGs of the 80s utilized an overhead view or a first person perspective, while a select few (such as Falcom titles like Xanadu and Romancia) were side-scrollers. Riglas is one of the few that uses an oblique perspective, which is technically side-scrolling but lets you walk upwards and downwards, commonly called “belt-scrollers” when applied to beat-em-ups like Double Dragon. The closest point of reference for Westerners as far as RPGs go would probably be Lenar’s famously dreadful Deadly Towers, though thankfully Riglas is a bit better.

Riglas is a continent largely ruled by two races: the Miria and the Galt, who are constant war with each other. Caught in the middle are another minority race, the Osborn, who are oppressed by both sides. You control a young man named Mei, who leaves his village to find the mysterious secret of Bershuna, in order to free his people. 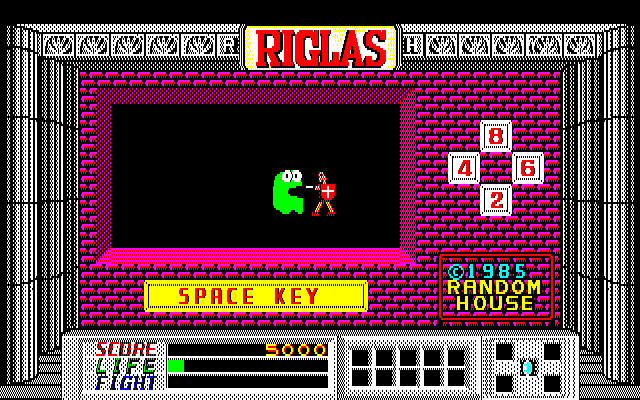 Here’s the opening instruction segment. Yes, Riglas is an action-RPG, with the hero controlled by the numpad. However, unlike Hydlide or Ys, it doesn’t use a “bump” system and instead it has a separate attack button. Such progress! However, as you can see in the above picture, your sword is only a few pixels long, so it’s still unwieldy. 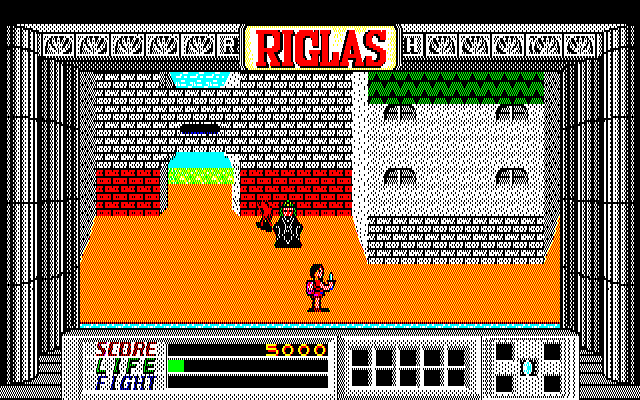 This is the opening screen of the town. You can go north to leave, but you won’t want to just yet. Instead, there’s a whole bunch of stuff you need to do here before you begin the journey proper. Yes, much of the game simply involves running around, collecting items, and trading them for other items, which are necessarily to open up areas and continue the quest. 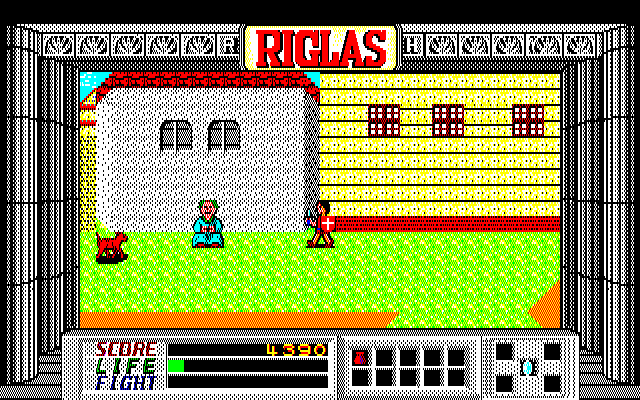 There’s not much in the way of stats. The “score” is basically an experience gauge, that raises when you accomplish certain goals, kill bad guys, or grab certain items (like butterflies) or lowers when you attack good guys (it also seems to drop for other reasons I’m not clear on). This dictates the maximum length of your life meter, plus you need a high enough score to accomplish certain tasks. There’s also the inventory for the items you’ll find and the essential crystals to finish your quest. 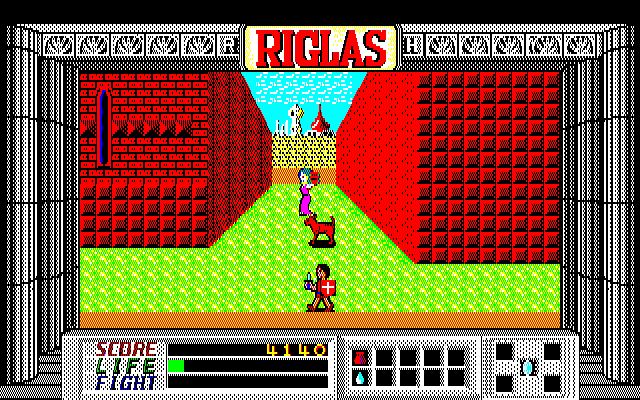 Even though technically you have a separate attack button, it seems like certain characters will still be hostile to you regardless of whether you’ve struck first. Sometimes those women will give you water, other times they’ll call you a pervert and tell you to get the hell away. In the above screenshot, they’ve also blocked the alleyway, since they just wander around randomly, making it nearly impossible to get by. (You can leave the screen and reset it, at least.) 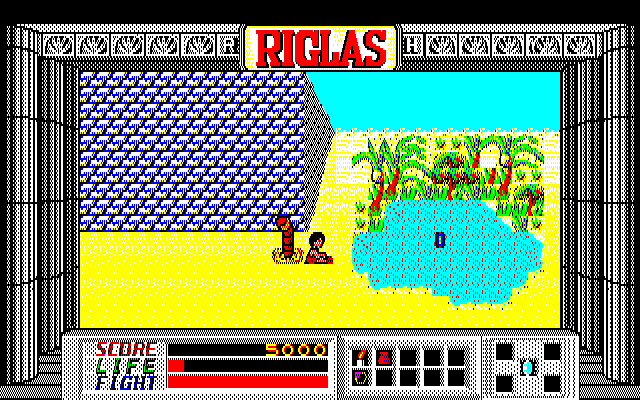 One end of town leads to this desert. Hit a cactus here to uncover an important item! Though in the above screen I’ve actually gotten killed by that worm thing. 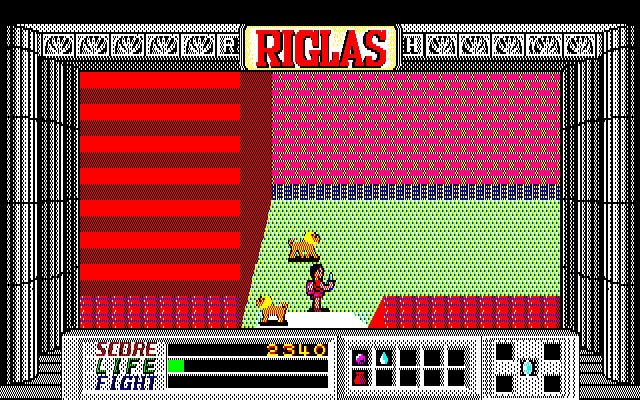 This is the area outside of the other end of town, right at the beginning. These lions will kill you almost immediately unless you’ve got the right items and enough strength to beat them. Even then, death can come quickly, though you can save anywhere. 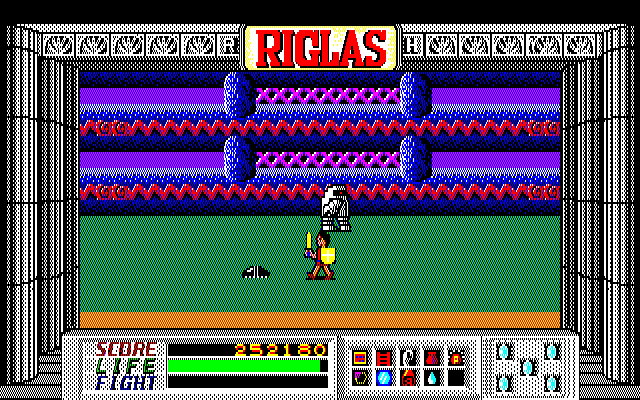 The disk image I have has a save right at the end of the game, which has robots! Having a fantasy world open up to a sci-fi area was a recurring theme in some early RPGs, particularly Ultima II (which was a mish-mash of themes) and Hydlide 3. 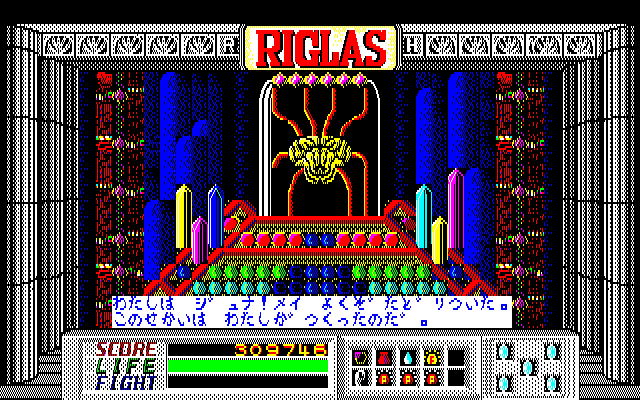 This brain thing checks to see if you have all of the items you need, and increases your score appropriately. Then you win!

Anyway, Riglas mostly consists of drawn out fetch quests, obtuse goals, and clumsy combat…though that’s par for the course for mid-80s RPGs. Separated from that, it’s actually a pretty rich game. You can technically explore most of the game world at your will (even though enemies will probably kill you), and there are plenty of landscapes beyond the town, including deserts, caves, and Egyptian-style pyramids. Though the dialogue is terse, it changes quite a bit throughout the game depending on what you’ve seen and done. And plus, the scrolling is pretty smooth for a PC-88 game, which was in itself an extraordinary technical achievement for the era.

There’s quite a bit of history surrounding its developer too. It was programmed by Kazurou Morita, who had won an Enix programming competition with his strategy game Morita no Battlefield. With his reward money and royalties, he founded Random House, which made a Xevious clone for Enix called Alphos. His experience on an action game like this gave him the technical abilities to create the scrolling for Riglas. He also worked on a series of RPGs as part of the Minelvaton Saga, including Digan no Maseki, plus he was known for his work in artificial intelligence for a number of shogi simulators. He worked on an eclectic group of titles through the rest of his career, until he unfortunately passed away in 2012.

Here is a complete video walkthrough of Riglas on Youtube:

Read more about the Dark Ages of JRPGs!