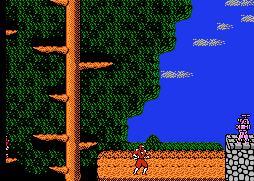 To the average gamer, there is something scary about the idea of a game in which you die in one hit. Mistake is human, perfection isn’t, and playing games is supposed to be fun, right?

But what if the levels are short, and enemy patterns predictable enough? Surely, those are mitigating circumstances. You’re not being asked to do the impossible anymore. All you need is some practice. Still, going through the same levels again and again so you can make it a little further every time can get tedious… unless, of course, the game grants you infinite credits. Then you can relax a little. Just take it one level at a time. 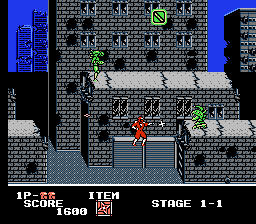 While it has become a common approach in more recent years thanks to a certain breed of indie games, in the days of 8-bit gaming it wasn’t so common. The first two Ninja Gaiden had infinite continues, though it also provided the player with a generous health bar; the problems were the unpredictable patterns of some of its enemies and a tendency to have them suddenly appear to knock you into a hole whenever you jumped. Forgiving, but unfair. The original Shinobi, in its console incarnations, had the methodical approach, but limited continues. Unforgiving, but fair. 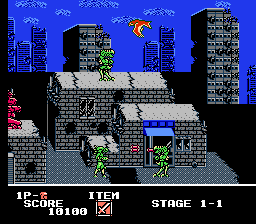 NMK Co./American Sammy’s (Rolan’s Curse 1 & 2, Ninja Taro) nearly unknown Ninja Crusaders lies somewhere between these two giants of ninja gaming, while remaining as difficult as either, with an animal morphing gimmick straight out of Altered Beast thrown in for good measure. There’s also a 2-player mode, which is pretty rare among that type of side-scroller. It makes the game much easier by allowing you to continue uninterrupted as long as you have lives left, while a single player must restart the level every time he dies.

The story is simple: a mysterious alien force has invaded earth and destroyed most of civilization. After failing to stop them, some ninjas were able to flee Japan and regroup in distant lands. A decision was made to send two ninjas, Talon and Blade (who wear red and green respectively, like Mario and Luigi), in a final effort to reclaim their land. 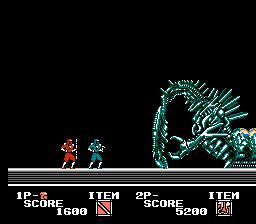 The graphics are just average for a late NES title, but they manage to create some pretty interesting environments with just a bit of details and the use of unusual colors, while the music is motivating enough without being especially memorable. The controls are tight and responsive though, and the ninjas move fast and jump about three times their height. 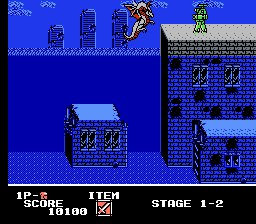 There are four types of weapons with significantly different properties, each of which also allows you to transform into a specific beast and back at any time by holding up and the attack button.

Shuriken are weak but have infinite range. They correspond to the tiger, which is fast, has a short attack range and jumps even higher than the ninjas. The chain is mid-range and is just as weak, but it can hit several enemies at once, and lets you turn into a scorpion, which is slow and nearly useless on land but swift and agile underwater. It attacks with its tail, which is similar to the chain. The staff’s short range makes it a risky weapon, but it is very, very powerful, and can take down the first two bosses with just two and three hits respectively. Its animal is the bird, which cannot attack but can, of course, fly, allowing you to traverse certain levels without much difficulty. Since staves can often be found towards the end of levels, the bird form is a good way to make it back through certain stages to take another shot at the boss after you lose the first time. Finally, the rarest of the four is the sword, which is similar to the staff and lets you become a dragon, which flies, shoots projectiles and is invincible. This transformation only last a few seconds, however, after which you revert to your original form with shuriken equipped. It is possible to get through the game without ever using the animal forms, but they can certainly make your life easier. 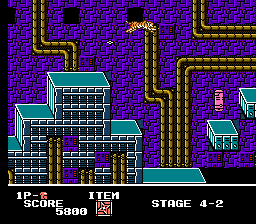 Weapon changes are done by finding icons strewn generously throughout the levels. Grabbing an icon corresponding to the weapon you’re currently using grants you an extra life, meaning an extra chance before restarting the level if you make it to the boss.

There are five stages in all, each divided into two sub-stages and at least one boss fight, taking you through the partially submerged ruins of a devastated city, an otherworldy canyon, a forest, a castle keep, a warship (which you can either go through on foot or by swimming next to it) and the enemy’s futuristic headquarters. For the most part, enemies follow simple patterns and aren’t too hard to deal with individually. They do respawn, so backtracking is ill-advised. The platforming segments are rarely a problem as the jump handles quite smoothly. In the first half of the game, caution and decent reflexes are enough to carry you through. By Stage 3-2, however, things get much harder, and it becomes necessary to chart a path through each of the remaining levels, little by little, through trial and error and careful observation of enemy behavior. 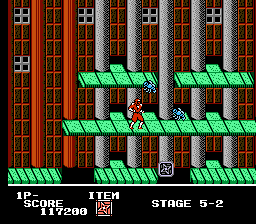 The bosses, meanwhile, follow strict patterns, and aren’t overly difficult to figure out after a few attempts, though there is always the tension of being one hit away from death. The most challenging battle has you facing an UFO that has an attack where it shoots fire balls from underneath that will come at you no matter where you are. The trick is to stand directly under its cannon and start moving a bit before it fires, as there is a delay between the time it calculates its aim and when it fires. The final boss begins as a giant knight in armor, which eventually turns into a strange white alien, almost hieroglyphic in appearance, and is probably the coolest fight in the game. Finishing the game nets you a text-based ending and loops back to the beginning, while doubling every enemy’s health. 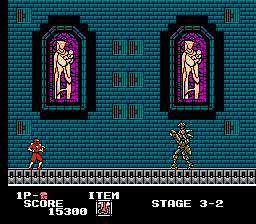 In the end, Ninja Crusaders is an overlooked side-scroller of above-average quality, and while it doesn’t quite have the flair of the classics, it is certainly worth a playthrough for obstinate players who don’t mind the try-die-try routine, or for two friends looking for a quick old-school romp. 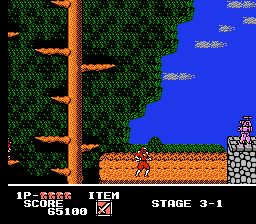 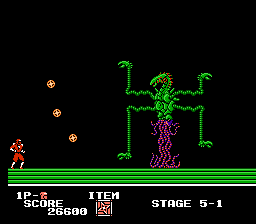 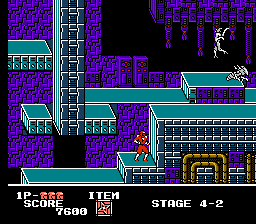 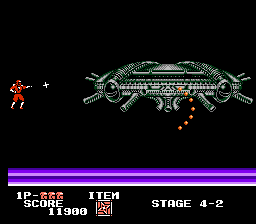 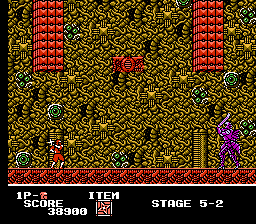 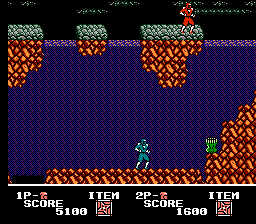