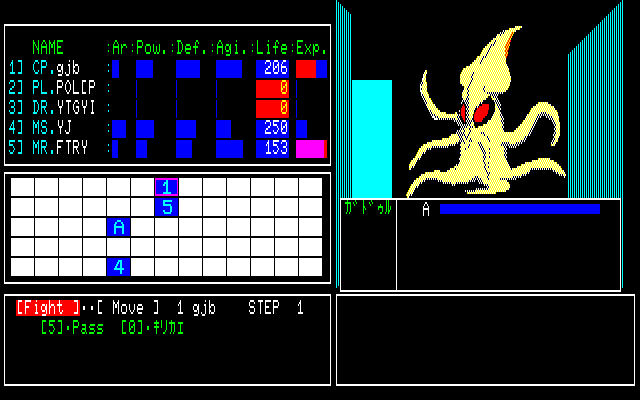 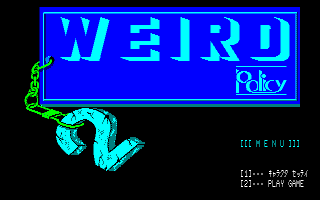 I thought a game named Weird 2 would be an interesting game to cover for this column…but nope! It’s actually pretty standard, in spite of the sci-fi premise. Given the katakana, I think the name is actually supposed to be “Wired” instead of “Weird”, but who knows. There doesn’t appear to be a first entry in the “Weird” series, unless it’s one of those strange cases like Taito’s Metal Soldier Isaac II where there was an initial game that just was never publicly released, and the publisher just kept the numeral for the sequel. So that makes for two reasons why this title is inexplicable! The game was developed by Policy, which I can’t find much else out about, particularly due to the generic company name. “Weird” is the name of the starship, which has landed on the planet Maria to discover the secret to eternal life. 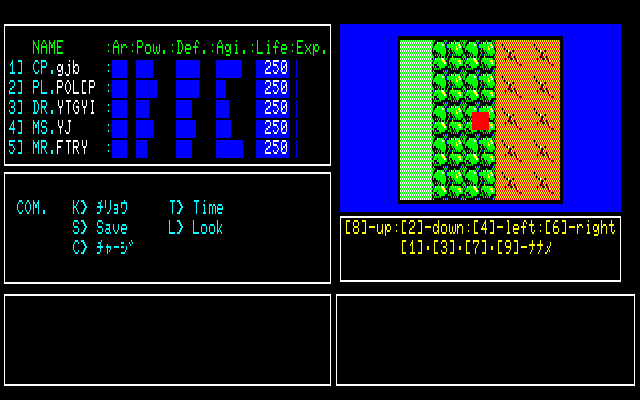 You can actually create and name your party, but here I started with whatever party was loaded onto the disk image I had. Movement is handled entirely through the keypad, and the map contained in the window in the upper right corner of the screen. One super annoying thing: the overworld boundary is not visible, so while it looks like you can walk on certain tiles, you can’t. Instead, it just obnoxiously beeps at you and proclaims “ｽｽﾒﾏｾﾝ” (“can’t proceed”). Another super annoying thing: the inputs buffer so if you’ve held down the movement key too long and you’ve hit any type of wall, it will sit for several seconds and continue to beep at you. 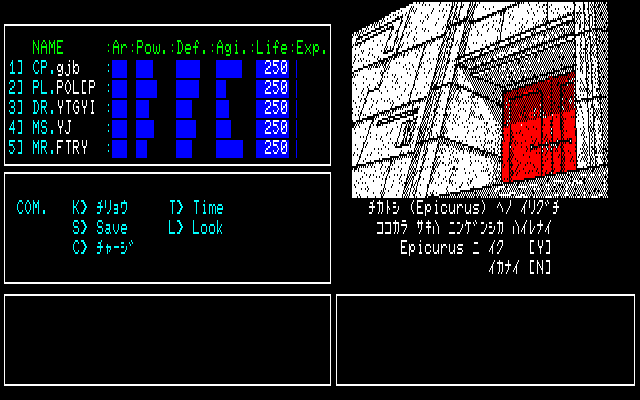 There only seem to be two points of interest on the map. One of these is this city called Epicurus. Let’s go in! 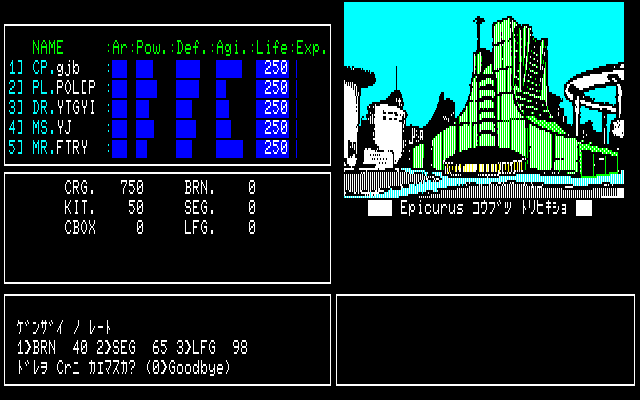 The map here makes a little more sense considering there are actual walls that map the boundary of the area, though the tiles you can enter aren’t distinct from ones you can’t, so you just sorta walk around until the screen switches. Here’s a drawing of the city you’re supposed to be in. There’s something you can do here but I’m not clear what it is. BRN 40? SEG 65? LEF 98? Okay then! I think it has to do with trading since it mentions “current rate” so maybe you can bring stuff here for credits or something. 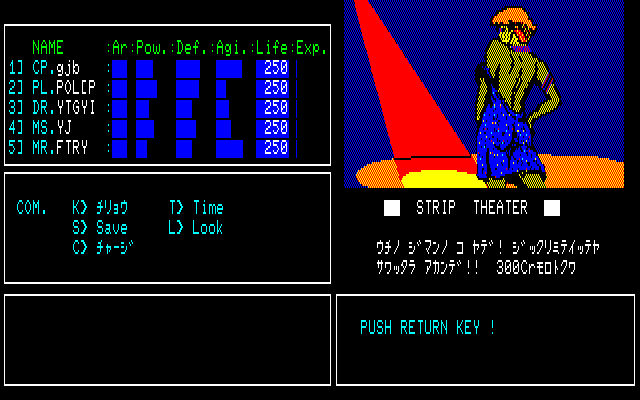 It wouldn’t be a random Japanese PC game if there weren’t some completely out of place nudity, so one of the other stops is a strip theater. You can return a bit later and see a terribly drawn naked lady (the Game Preservation entry for this game also shows you fighting a naked woman). 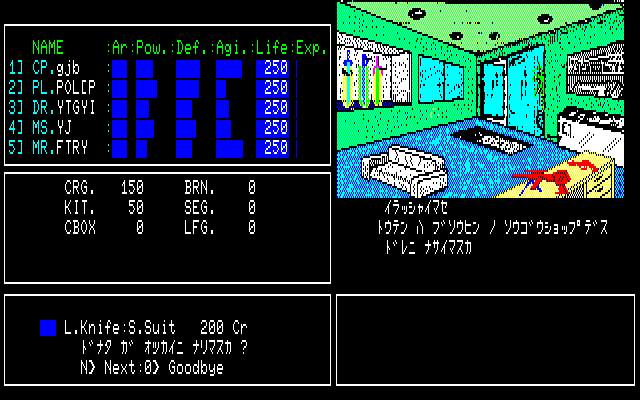 Ah, someplace vaguely useful! This is a shop where you can buy stuff. Elsewhere, there’s also a drug store. 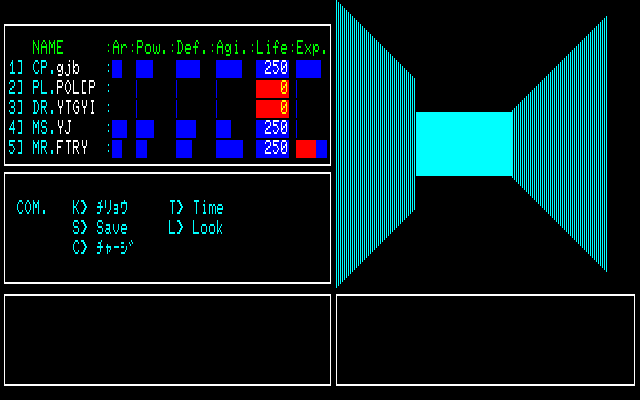 There doesn’t seem to be much else to do in the city besides ogling women and buying stuff, so you can leave back to the overworld and blunder around a bit until you find a dungeon. Here it switches to a Wizardy-style first-person dungeon crawler. 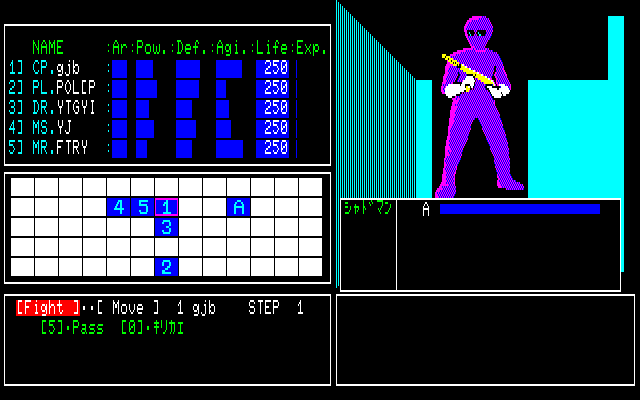 Here’s the first fight! The battle system is actually relatively unique here, as it’s grid based. Each character is indicated via their number on the grid in the mid-left part of the screen. Each turn, you can choose to move or fight. Again, the interface here is pretty annoying because, by default, “Fight” is chosen, so if you press a direction, you’ll attempt to attack in that direction…but if nothing is there, you get another error message. Instead you need to switch to “Move” mode first by hitting “0”. Anyway, I don’t think I adequately prepared because two of my guys died in this encounter with a “shadowman” and it took several turns to bring this guy down. 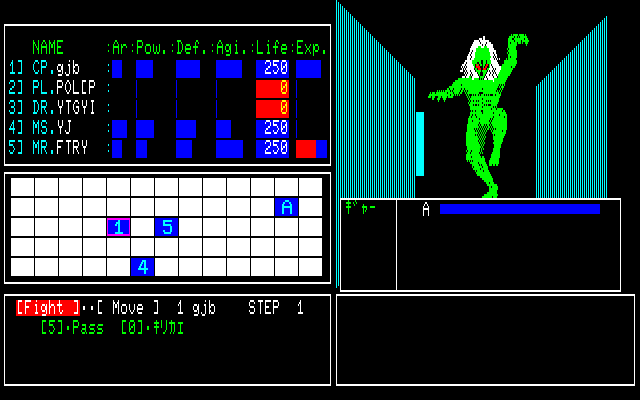 And another encounter. At this point I called it quits. I’m not really sure if there’s more than one dungeon or just that one.

This Japanese blog entry comments that if Weird 2 is the first RPG you’ve ever played, you’d probably become addicted to it. Otherwise it’s hard to shake the feeling that it just takes elements from other games from around the time (Dungeon, Fantasian, Black Onyx, Mugen no Shinzou) but outside of the interface annoyances, it’s not too bad for the era.

Read more about the Dark Ages of JRPGs!