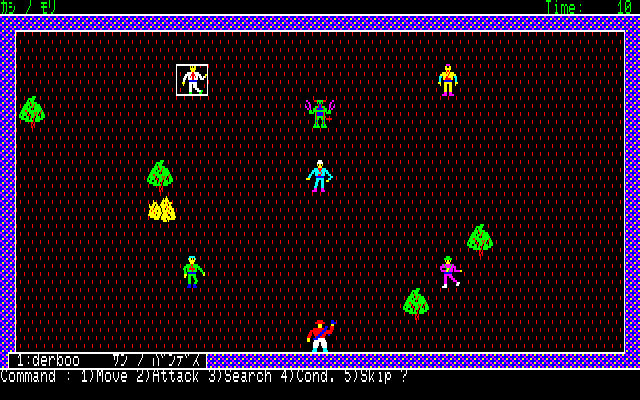 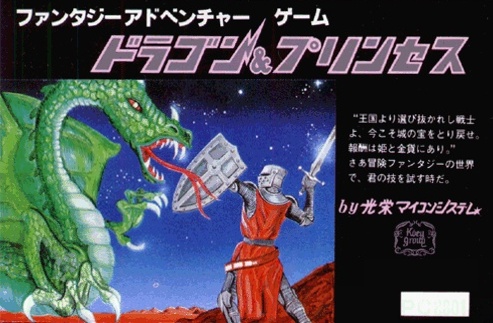 When people think of Koei nowadays, the first association is usually Dynasty Warriors and its many spin-offs. Before that, the company was already famous for long-running strategy series like Romance of the Three Kingdoms and Nobunaga’s Ambition. But not many remember Koei as the pioneers of the Japanese role-playing world. Founded in 1978 by Yōichi and Keiko Erikawa, Koei was among the first software houses in Japan ever. From the very beginning, the business was focused on simulation war games, but soon the Erikawas also started pushing a brave new genre in a time when hardly anyone in the country had even heard of RPGs.

Maybe that was the reason why Koei was still a little shy to use the label in the beginning – Dragon & Princess is instead described as a “fantasy adventure game” on the box. It’s not entirely false advertisement, as the game also has many elements of a traditional text adventure, but it is nonetheless clearly more than that. The game is credited to Y. HAYASE and LOCKE, but no one seems to know who that actually is. Hayase at least is a real Japanese name, but there is no known game developer who would fit that initial and career time frame. 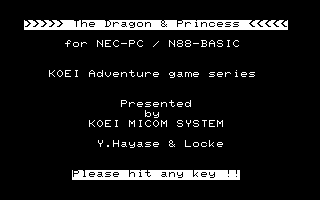 Like many games of the time, it’s not documented when exactly The Dragon & Princess was published. Some Japanese databases list December 1982, but there’s little to find in terms of actual contemporary sources. There is an anecdote that Koei wanted it to become the first adventure game made in Japan, but was beaten to the punch by Omotesandō Adventure, whose source code was published in “Yearly Ah-Ski!”, a joke supplement to Monthly ASCII magazine for April Fool’s Day, even though that game relied entirely on English text. This could either mean that The Dragon & Princess was actually released closer to Omotesandō Adventure, or that it was quite significantly delayed in the meantime.

Right at the beginning of the adventure, you’re asked to name everyone in a band of five adventurers. There are no additional options to customize the party, but everyone has their own predefined set of attributes. “Pw” stands for attack power, whereas “Sp” is a little harder to pin down. There are no Spells in the game, while the order and range of moves is always the same. It’s is possible that it means speed as the ability to avoid getting hit, but it’s difficult to confirm or deny this without access to the manual. Each adventurer also comes with a percentage hit chance and a starting amount of hit points. 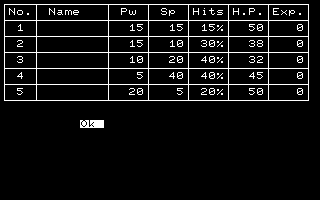 After naming your team, you start out in the royal castle of a medieval fantasy land, where the king tasks you with the quest to exterminate a gang of bandits and return the treasure they’ve stolen. Because this is a typical fairytale story and the year was 1982, the promised reward is the princess’ hand in marriage. (The would-be suitor is the first character, who serves as the player’s avatar – if he dies, the game is over, whereas the other guys are simply removed from the group.)

The entire exploration part of the game is a pure text interface similar to traditional adventures, although you order your party around with simple keystrokes. The number keys translate to the four cardinal directions, and with the respective cardinal letters, you can look around, search, attack, read, buy or simply get stuff, enter or go out of buildings, as well as change the group’s order and check their inventory, or condition (for which the letter is “x”, in contrast to all the other inputs). There’s also a command to make the group hurry, but if this serves any purpose other than triggering a complaint about fatigue, it is completely obscure. 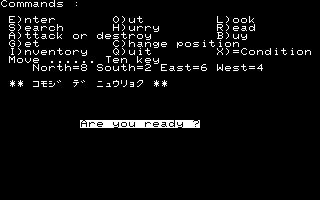 “Look” gives a short description of the current location in typical text adventure manner, whereas “search” reveals previously hidden clues or items, and sometimes doubles for a talk command. After marching westward from the castle, the party will get lost on the road over and over again. Most of the time they eventually just come out where they started, but with a little luck, they happen upon a teahouse by the road, where it is possible to search for a hidden sign with directions back to the castle, but also to the nearby town of ROSS-BLUE.

Stopping by the settlement is essential, as it is the only place to stock up on rations in LOCKE’s grocery store, which are consumed after every five actions in adventure mode. The town is also home to HAYASE’s arms shop, which carries short and long swords. Every adventurer starts with one of the former, but that doesn’t make the option to buy more redundant, as swords can and will break frequently during battles. Since there is no way to manage inventory, it’s not possible to stock up on weapons, so you must return here whenever one or several of your heroes end up disarmed. 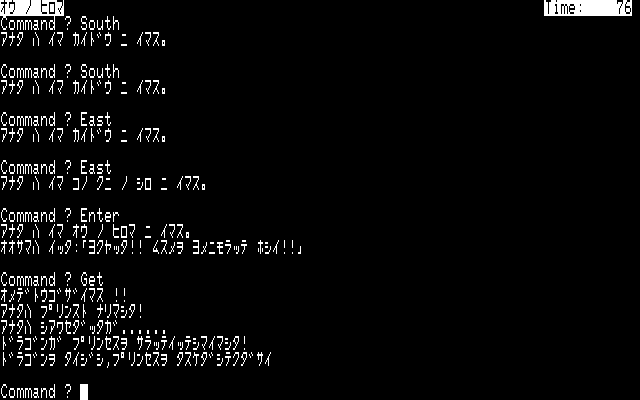 The city can be a confusing place, though. Most of the connections are pretty straightforward: It has a LUCKY Street, SALT Street, Shape Street and CAT Street running from West to East and WESTSIDE Street, WESTSECOND Street, EASTSECOND Street and EASTSIDE Street running from North to South, and you move from intersection to intersection. But the trouble starts when you enter the ROYAL Street: You get to ROYAL.1 by marching west from the intersection EASTSECOND-SALT-ROYAL, but there is no way to get back east directly. Instead you have to go one field further to the west to WESTSECOND-SALT-ROYAL, then move east from there to arrive at your original location. Moving south from ROYAL.1 leads to ROYAL.3, but from there you can only go east back to EASTSECOND-SALT-ROYAL, or south to EASTSECOND-SHAPE-ROYAL. Turning around northwards from there leads to ROYAL.2 (the location for LOCKE’s shop) instead, which has a northern exit to ROYAL.1 and a road leading eastwards back to EASTSECOND-SHAPE-ROYAL. 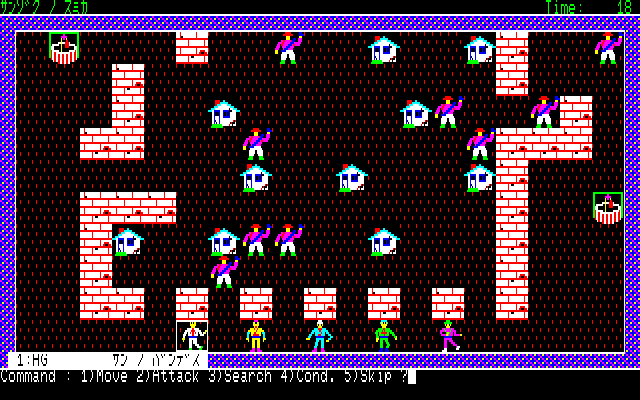 If you think that’s confusing, you better don’t look at our map of the woods, with their many twisting turns, illogical connections and plenty of identical areas where you can only get some orientation by subtle clues to nearby nature sounds. Fortunately, you don’t actually need to find your way around here, as the entire forest area is one big red herring.

By the time you realize that, however, you’re likely to have run into several random encounters with hostile local wildlife, which has to be fought in a separate mode, the only part of the game that’s supported by graphics. In the PC-88 version seen here, the scenes look pretty detailed for the time, but this seems to be a slightly later revision. The variants for PC-80 and FM-7 computers use much more abstract representations of the combatants.

The Dragon & Princess is not only possibly the first RPG made in Japan, but also one of the earliest role-playing games to adopt a wargame-like tactical movement approach for the turn-based party combat, possibly thanks to Koei’s history with that genre. Wizardry used the static approach known from many later JRPGs, where everyone stays in place for the entire duration of a fight, while Origin System’s Ultima series, like most RPGs at the time, put the player in control of just a single character and didn’t adopt a party system until 1983’s Exodus. The only other CRPG Koei could have taken inspiration from for the combat was Tunnels of Doom, but that would have required access to a TI-99/4A computer, so convergent evolution seems to be the more likely explanation.

However, the tactical options in the game are very limited. Any combatant can only do one of three actions each turn: move, attack or search. There are no alternative means of attack, such as ranged weapons or spells, so the only viable strategy is trying to isolate and surround individual opponents. The only variation comes from obstacles like mountains and trees – the latter of which can even be destroyed to clear the way. But the fighting feels really static and slow, not least because everyone starts with a terrible hit chance and several rounds can pass without anyone hitting anything, especially in the beginning.

Nonetheless combat isn’t too hard, because adventurers can move up to three spaces, while enemies only ever get one, which makes it easy to outmaneuver them. Even a starting group can deal with snakes or giant spiders, while bears and bandits can be a bit tougher, and the monsters are very deadly until the heroes got a little practice. It’s also possible to attack several friendly NPCs, but most of them easily mop the floor with an untrained party, whereas murdering the weaker ones results in an experience penalty. 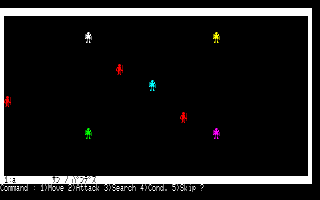 Experience points are awarded in direct relation to the amount of damage dealt by each individual warrior. Every 50 experience points raise the “Sp” and hit percentage by five points. The only value that never changes with experience is power, which can only be boosted by using stronger swords. Hit points can be regained by meeting village women who return from gathering herbs, which you can take from them to distribute among your group. The starting values are by no means a maximum, as the hit points can be boosted to whatever arbitrary limit the programming dictates.

The actual quest is actually fairly simple: You have to pass by the town to the Dusty Hills, move straight south into the mountains and find the bandits’ lair. But even after you take out everyone here and retrieve the treasures from their huts – the only instance where the search command is of any use on the battlefield – the king insists that there are still bandits left. In the mountains, you can find a hermit who talks about a hideout in the town. 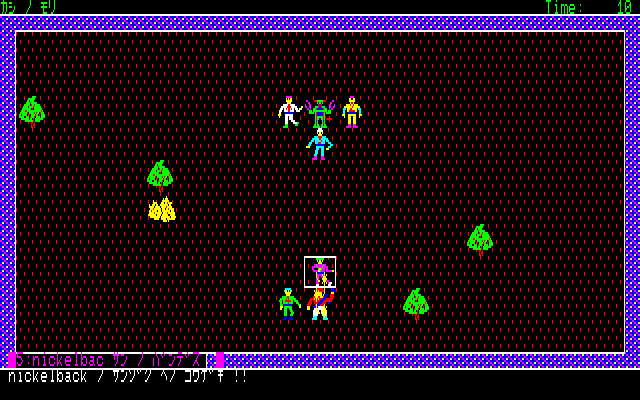 There is indeed one suspicious place in ROSS-BLUE – the bar KOEI. If you enter here without searching first, you fall into a trapdoor and are forced by the owner to buy a rope ladder for 300K – your entire budget at the start of the game. Once you’ve learned about the bandit hideout, you can attempt to attack the owner, who then tells you the location to save his life. Only after clearing out this second base of bandits and finding the remaining treasure, you can return to the castle, claim the princess as your prize and life happily ever after…

… but wait! Wasn’t there something about a dragon? Shortly after the marriage, the princess gets snatched away by that treacherous lizard, and you – now meaning just the number one guy from your previous group – have to find the dragon and get back your bride, all alone. This makes combat much slower and very tedious, but at least after taking out all the bandits none of the random encounters are likely to be a threat anymore. This second quest is even shorter than the first one, and if you’ve thoroughly explored the region before, it’s fairly obvious that – of course – the dragon has to be at the ominous but previously completely uneventful Mt. Lu-fey. 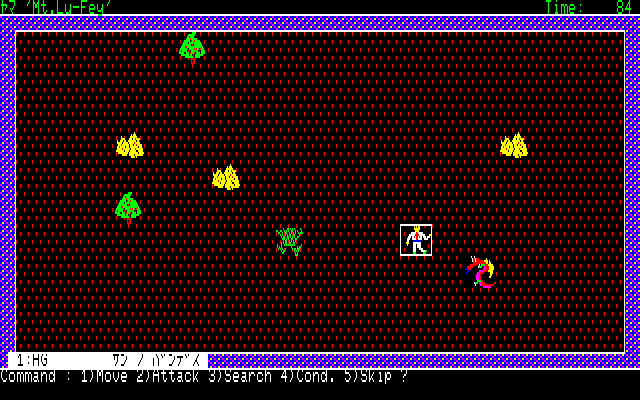 The only new “obstacle” on the way is a young woman trying to lure you into her house and seduce you – using the “get” or “enter” commands here costs you a whopping two hit points and earns you a reprimand for coveting another woman while your righteous wife is in distress. It’s strongly recommended to stop by the hermit one more time so he can offer you the magic sword, which is twice as strong as an ordinary longsword, making the final fight much easier. After slaying the dragon, you’re graded with a final score and encouraged to improve upon it in later sessions, but the game doesn’t spell out the maximum – maybe another detail lost due to the lack of a copy of the manual. 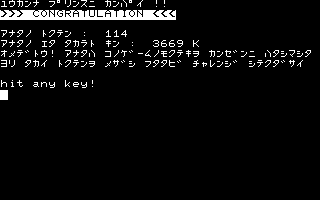