Rendering Ranger: R2 is one of those infamous titles whose price on the retro game marketplace overshadows its content. That’s a pity, because the game is actually pretty great. It’s also a bit of an oddity, because it was developed in Europe by Manfred Trenz, the same prolific developer behind Turrican, but was only released in Japan, with an extremely limited run.The title comes from, suitably enough, from its pre-rendered graphics. Under its original name of Targa, the game was going to use all sprites, until the popularity of the Donkey Kong Country games caused a change in development. 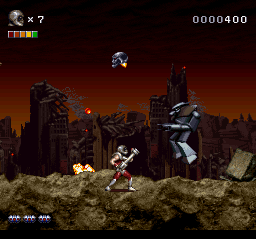 The first level begins with our nameless hero dumped onto a post apocalyptic looking planet being attacked by flying robots that look like something out of an 80s sci-fi movie – it is not dissimilar to Contra III. Throughout the first level, you fight huge enemies, get bombed by a kamikaze space fighter, and fight an enormous boss at the end. This is a great way to begin an excellent game, as levels are filled with surprises. The graphics are extraordinarily, like the kind of thing you would expect to see on the Saturn. The most impressive part is that the game has absolutely no slowdown. Although the system had a reputation for copious slow motion actions thanks to early releases like Gradius III, this late release was substantially more optimized, able to handle the hectic action, with enemies bursting from all sides, while keeping up the blazing fast tempo. 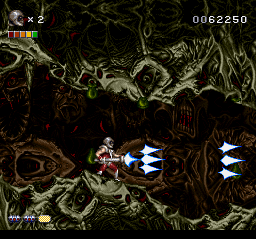 The sound is equally phenomenal. Trenz pulled double duty as a programmer and a composer, and he did an amazing job. If you look at the sound credits, he made every last song on this game himself. Like many games that herald from Commodore 64 and Amiga developers, it has a heavily synthesized feel and perfectly suits the mood of the situation. 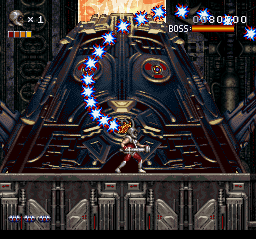 While the graphics and sound are incredible, the best part about this game is the action. At a glance, it is just a standard side-scroller that doesn’t know whether it wants to be a Contra clone or a Thunder Force clone. Once you actually play through some levels and get the hang of the game, it is really something very different. The level design is not always just a straight line like most run and gun games. The levels can twist turn, and lead in every direction. Sometimes the paths branch, but not enough that you would get lost. 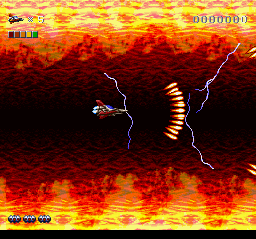 In the run and gun levels, little skull enemies will periodically pop up. If you can shoot them, the skull enemies will die and drop health or weapon power-ups. If you do not have the weapon that they power up yet, then you gain that colored weapon. There are four weapons in total – Red Spread, Blue Spear, Yellow Pulse, and Green Rebound. Red Spread will be instantly familiar to anyone who has played Contra or Turrican, as it’s just like the spread gun, but much faster. Blue Spear only fires in front of you, but it shoots extremely powerful blasts. Yellow Pulse shoots in almost every direction simultaneously, with more range as you level it up. Finally, Green Rebound is a lot like the green shots from the forgotten classic Genesis shooter Gleylancer. Your shots will frantically bounce off walls and fly everywhere. Additionally, you can press the X (on default controls) to unleash a super explosion. They actually recharge slowly over time, so you don’t need to worry too much about wasting them. 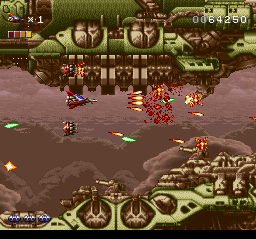 Knowing which weapon to use and when to use it is crucial to getting far in Rendering Ranger: R2. This is especially true in the flying segments. Your gun works exactly the same as it would on the ground, but with a very interesting twist. You can pick up indestructible satellites much like the bits from R-Type that hover above and below your ship. They will additionally fire whatever weapon you have out at the moment. You can also turn your ship around and fire from the back. Be careful, though. When you die, your weapons go back to their lowest level. Many of the bosses have clear weaknesses and can be a real pain if the right weapon to defeat them is at a low level. 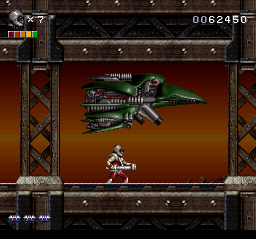 Speaking of difficulty, Rendering Ranger: R2 is brutal. The bosses are massive and can take multiple super moves before going down. The levels themselves are also very long. One level in particular has your ship going down a very thin tube that twists and turns like a snake while moving at very high speeds. It is certainly not as hard as some of the other games on the system, but Rendering Ranger is still quite a challenge. Your invincibility window is short and can lead to some unexpected deaths. At least the difficulty is somewhat alleviated by a health bar and force field. You can take about five hits before you die, and you respawn immediately right where you died. You can set your lives, up to seven. There are technically no continues, but at least there’s a password system to record your level. 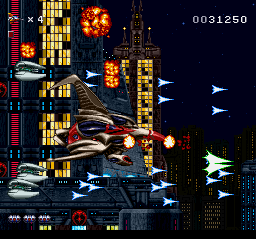 Some of the best parts of this game are the insane moments that make you wonder “Did I just do that?” right after completing them. After going through a battleship raid, a large, shark-like monster enters through the clouds. Huge missiles greet you while descending on the skyline of a city while hordes of enemies come from all sides. Out-of-control ships zoom from the background, complete with Mode 7 scaling effects, and destroy parts of the scenery. It feels like the city knows that you’re coming and that it’s throwing everything it has at you to make sure that you don’t survive. The final boss is also cool, as he drops walls of fire everywhere and makes it rain skulls. 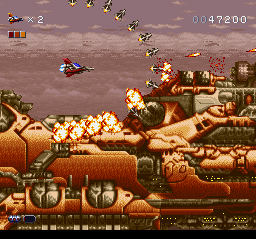 Rendering Ranger: R2 is generally pretty amazing, though there are some notable faults. The stage designs can be confusing at times, especially during some of the more maze-like settings. Some of them simply go on for far too long, which makes replaying slightly tedious. Most regular enemies take far too many hits to kill with the basic gun, so keeping your weapon powered up is essential or otherwise it ruins the pacing. The space ship levels seem to enjoy making you fit your ship into tight spaces while going really fast and throwing unexpected twists and turns everywhere. The game can feel cheap at times, but never cheap enough to stop it from being fun. 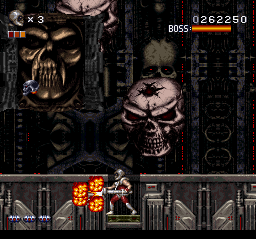 In many ways, Rendering Ranger: R2 suffers from some of the same faults as other Western-developed side-scrolling shooters of the time. It’s not quite as refined or polished as its Japanese counterparts, and the level designs could’ve used some tightening up. But while it’s not on the same level of legendary classics like Gunstar Heroes or Axelay, the action itself is still quite fun, and it’s a technical marvel of what the Super Famicom could do in the right hands. 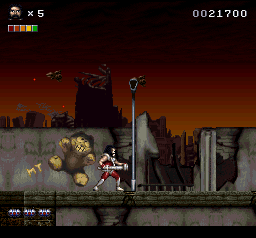 A beta version of the game was released which still the title screen as Targa. However, this particular version uses the same prerendered graphics as the retail release. The only change beyond the title screen is the main character, who doesn’t wear a helmet. Presumably this would’ve been the version published in North America and Europe, had Trenz been able to secure a publishing deal in these territories. 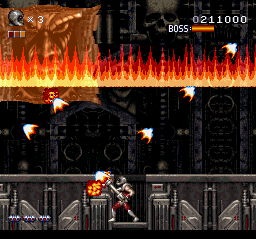