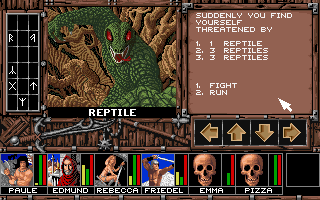 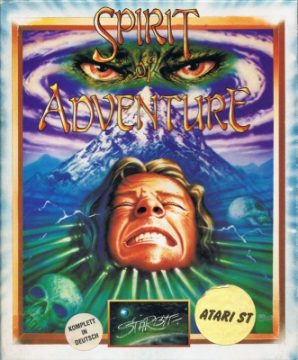 Attic developed several smaller games in various genres before Realms of Arkania that were published by Starbyte, but one of them stands out because of many similarities to Blade of Destiny: That game is Spirit of Adventure. Still without the pen & paper license, the character creation is much simpler – after choosing from the rather exotic classes and races, all values are generated automatically.

Just like all three Arkania games, the adventure starts out in a temple, or rather a monastery in this case. After the party is briefed about its adventure and leaves the holy halls, the relationship to the later games becomes immediately visible: The 3D view and the interface with the six characters and an extra slot for NPCs almost look like an alpha version of Blade of Destiny, it even uses the same mouse cursor, and plenty of familiar imagery. Some of the artwork was even plainly reused in Blade of Destiny. 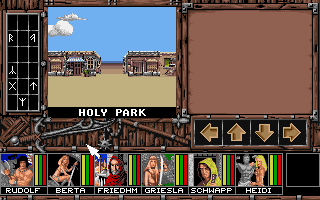 Combat is much more archaic, though. In place of the tactical battlefield stands an entirely menu-based system, well known from games like Wizardry, or in slightly altered form from most old JRPGs. Only the characters in the first three slots can attack the enemies directly, but a lot of classes possess an alternate “mind attack”, which serves as a generic offensive spell with very low cost. Other spells are available as well, but they have to be created by using a set of runes, many of which can only be found later in the game.

The game can only be considered borderline unplayable nowadays. There’s no automap, and the movement in cities and dungeons is executed rather confusingly. Every wall or house has a strange exclusive field when stepped up to closely, and turning around moves the party automatically a step away from it. It doesn’t make much sense, and renders navigation and custom map making into very tiresome tasks. Houses and shops are impossible to distinguish from each other, but at least the cities have street names who are displayed at any time to help at least a tiny bit with the orientation.

There aren’t many redeeming qualities or storytelling worth mentioning, either. Most of the time it’s just grinding until the party gets strong enough for the next area, heal at the healer, save at the monastery, rinse, repeat. The game is also completely quiet, there’s no music or sound effects whatsoever except some static noise in the intro. Spirit of Adventure is interesting to have read about as a kinda prototype to the series, but actually playing it is ultimately not rewarding at all. 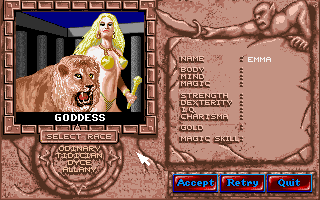 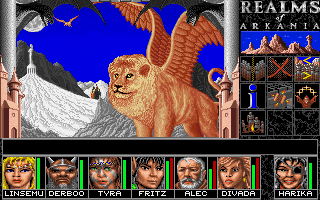 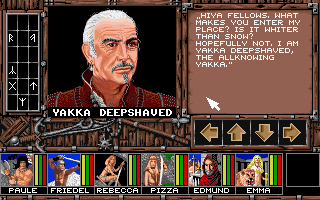 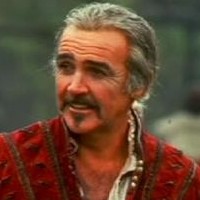 The Realms of Arkania games themselves contain quite a few references to personalities and events in the real world (and other fictional ones), but those are nothing compared to the “stolen” faces in Spirit of Adventure. To the left are the creators of the game as the lords in “The Castle of Attic,” expansive comparisons for all the games can be found in our feature Tracing the Influence. There are also many more pop culture references to be found in text form (not few of which have been lost in translation and/or didn’t age quite as well as the visual ones).