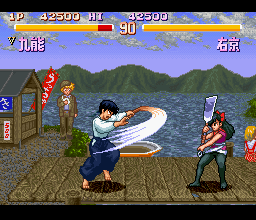 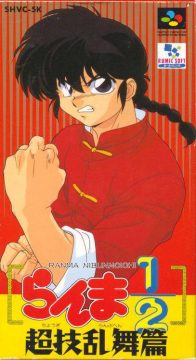 The peak of Ranma ½ fighters, Ranma ½: Chougi Ranbu Hen was developed by Rumic Soft and released for the Super Famicom in 1994. It’s a more blatant Street Fighter II clone than ever before, but in the same respect as imitators like Fatal Fury and World Heroes, Chōgi Ranbu Hen tries a few things of its own.

This game’s plot is very simplistic. Each character becomes aware of the existence of twelve magical ingredients with which to make a magical maneki neko that will grant any wish. Now they must travel the world to find the ingredients, beating the hell out of each other as they go. Keeping with the humorous tone of the anime and manga, the characters have rather goofy wishes that are potentially realized in equally goofy endings. 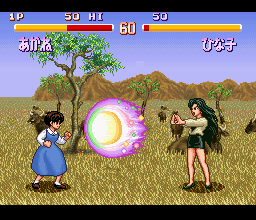 Each character in Chougi Ranbu Hen is able to execute a powerful and showy super move, but these are executed differently than in most 2D fighters. Rather than tying super moves to a gradually accumulating gauge of some kind, tapping the L button causes your character to begin charging energy. After a second or two without interruption their heath bar will begin flashing. As long as the health bar is flashing, super moves are enabled. Characters are completely mobile during this period, but if a special is executed or any move connects, the health bar stops flashing.

There are only two other major differences to Chougi Ranbu Hen‘s basic gameplay from its predecessors’. Firstly are “Oowaza:” moves executed by hitting both Y and B or X and A at the same time. For most characters, each of these two button combinations will perform a different move that can be cancelled into from any cancellable normals for combos. Secondly, pre-designated specials can be assigned to the R button in Options Mode.

This game’s greatest innovation is Tag Team Mode, beating out SNK’s Kizuna Encounter by two years. It’s essentially a Versus Mode in which both players choose two characters and then fight in a wrestling ring. Fighters can be switched in and out by moving to the far end of your side of the screen and tapping Select when a second health bar is below the current character’s health bar. Whichever character is sitting out gradually regains health. If either of your two characters is defeated, you will lose the round. This forces each player to keep switching between both characters to have the best chance of winning. It also minimizes the effectiveness of trapping your opponent in his side of the stage, where he can tag and you cannot, and means that trapping him in your side of the stage costs you the option of tagging. As awesome as Tag Team Mode is, it is exclusively for two players. 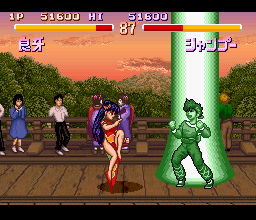 The overall presentation is several notches above the first two games’. Among several other very well designed backgrounds, there is the Italian fountain from La Dolce Vita, the shores of Loch Ness (complete with Nessie in the background), and a gorgeous looking bridge level. Characters are nicely designed, drawing elements from both their manga and anime portrayals. Overall, everything looks great. The music is perfect for the game’s tone, and there are digitized voices everywhere. Characters throw out Japanese phrases during every special and super, and even have spoken win quotes. Awesome.

The aesthetic style goes beyond simple cosmetics, too. While many fighters pour far too much effort into making themselves come across as badass and cool, Chōgi Ranbu Hen has a very charming tone to it. Its contenders are more goofy and innocuous than vicious, and the game sports consistent sense of humor in the same spirit as the Ranma ½ anime and manga. Anime-style sight gags are everywhere, thanks to some particularly attentive designers, and some of the characters’ endings are genuinely hilarious. Every element of Chougi Ranbu Hen‘s presentation is refreshing, and more fighters should take this kind of approach. 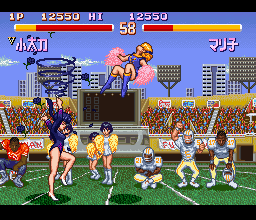 Chougi Ranbu Hen really only has one lone problem: its slow pace. It is about as fast as the original World Heroes. The speed of moves and walking are really not a problem – it’s mostly the jumping speed. This makes it like playing a fighter where every character moves like Dhalsim. This does not keep it from being enjoyable, but does little to elevate Chougi Ranbu Hen to the same tier as Capcom and SNK’s better titles.

Ranma ½: Chougi Ranbu Hen might be a Street Fighter II clone whose license was its main selling point, but it is very well executed for what it is. It boasts some great comboing and cancelling systems, a refreshing humorous presentation, and it is easy for anyone to get into. I consider this among the Super Famicom’s best exclusive fighters, and would recommend it to anybody looking for a fighter for the console. If you can find somebody to play Tag Team Mode with, that alone should be motivation to get your hands on this game. It was almost released in America, but unfortunately cancelled before it hit the store shelves.