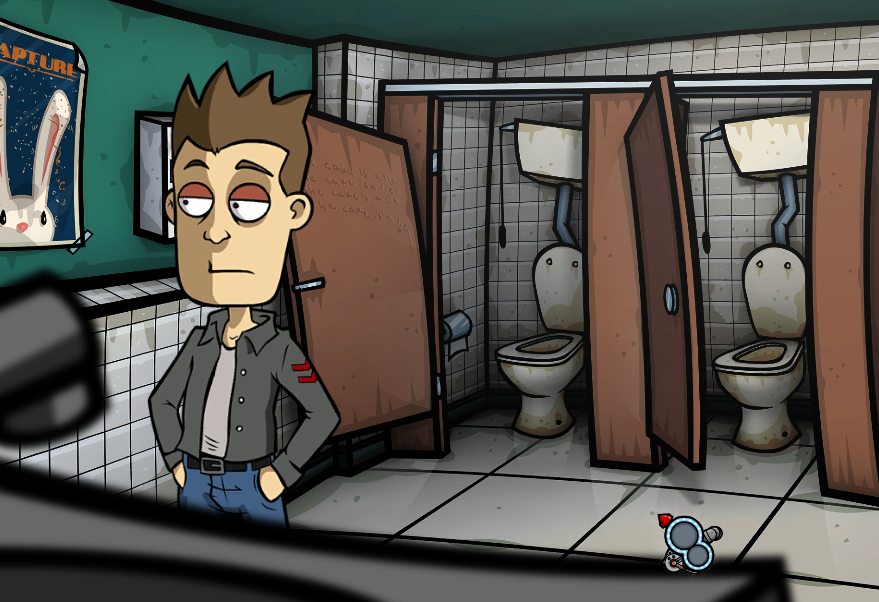 LucasArts, to this day, is the name that keeps coming up in the point and click world. They completely defined what a good point and click adventure is, especially the comedy titles, and countless games in the genre still pay tribute to this day. Randal’s Monday is no exception, though what it mainly takes from those classic games like Day of the Tentacle and Grim Fandango is not the style it goes with, but the pacing and volume of messed up gags and jokes. The game doesn’t look promising from a glance, with an art style not far removed from Family Guy and GoAnimate videos, but there is far more there than first glances would suggest.

The game casts you as Randal Hicks, whom is described as being a genuinely rotten, idiotic human being with a bad case of kleptomania (well, he is the main character of a point and click adventure). He’s celebrating his friend Matt’s upcoming wedding at the local pub with both him and his wife to be, and Matt shows Randal a mysterious ring he got from a bum for a single dorito made of countless priceless things he plans to give to his beloved. One thing leads to another, though, and Randal’s kleptomania ends up causing the dope to steal Matt’s wallet and the ring. Before he can return it Monday morning, Randal is fired from his job and ends up having to cough up three months worth of rent to keep his apartment. The ring is the only thing of value he has, so he pawns it to make ends meet, only to shortly get a call from Matt’s fiancé and find that his best friend has committed suicide. 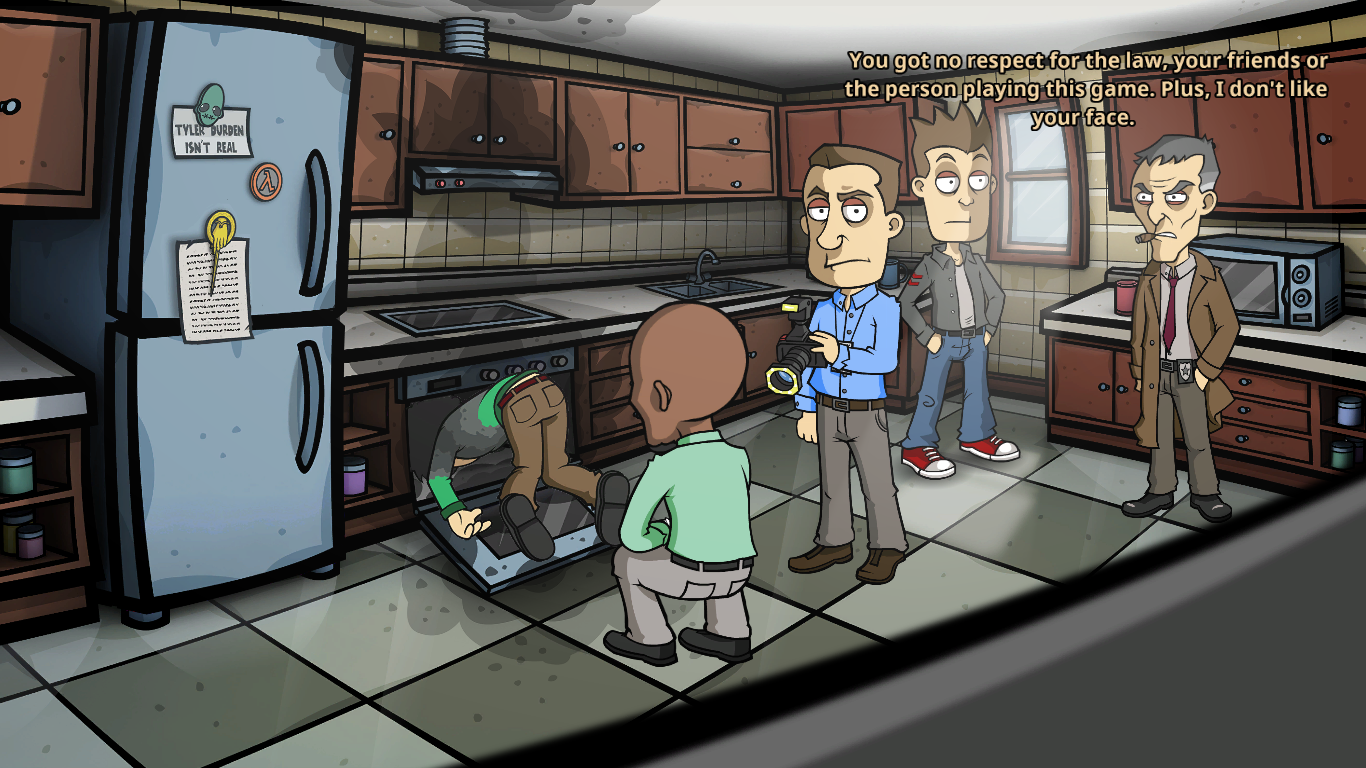 Things only get worse from there, as Randal goes to sleep, wakes up, and then discovers that it’s yet again Monday. The ring Randal sold is a magical one that has cursed him to live the same day over and over, though whenever Randal changes something the previous loop, it stays changed and the time line is altered to give a logical reason for the change, which results in him having had committed various shenanigans he can’t remember. Matt keeps killing himself and Randal keeps changing the lives of everyone around him in order to try and get the ring back, guided by a bizarre “business bum” whom Matt got the ring from in the first place. Randal has to set everything right, though his attempts end up causing far more trouble than he ever bargained for.

Despite all the references the game makes in its narrative, from a Twilight Zone narrator to The Lord of the Rings one ring causing chaos plot point, Randal’s Monday feels very much like its own thing and not just a bunch of parts slammed together willy nilly. That’s impressive, since the Hal 9000 is an actual character in this game that makes the most hamfisted references to his own movie. It’s one giant collection of references and ideas plainly taken from other works without a sense of shame, but it works far better than it should be. The writing is able to give good context for all these elements, either for dramatic reasons or to create new jokes and chances for meta commentary. The game has a good few moments where the characters joke about their fictional existence or the tropes of the genre, and the ending manages to save itself from its faults by having four characters from the last chapter pop up during the credits and argue about the decisions made in the ending. Unlike meta jokes that only point out the flaws, these gags work because the game never takes itself too seriously and earns those cute little breakings of the forth wall.

That’s not to say the dramatic elements are out of place. Despite being such a general jerk, Randal is a rather normal guy who reacts to his situation in believable and even relatable ways. He’s a product of the harsh and ridiculous world around him, but his character is saved by his sincerity in the few things he does care about, and he gets a strong arc over the course of the game, learning to take personal responsibility for his actions and to do what’s best for those he cares about and not just himself. He’s still a scumbag in many ways (especially when talking to women), but he has just enough good qualities that he functions well as a protagonist. The game never gets too mean spirited and balances the line between cynical, dark humor and proper narrative… with some unfortunate exceptions. There are a few sexist and homophobic jokes thrown in, and one particularly bad trans joke in the sixth chapter. Thankfully, these jokes aren’t that common and don’t drag down the rest of the humor, mainly because there’s just so many jokes.

The script is about 90% jokes, quips, gags, and slapstick. If one joke doesn’t make you laugh, there’s probably one just around the corner that will. A lot of humor is based around references, but the references are contextualized better here at times to reflect the characters and their personalities when they’re more than just window dressing (like Randal and the hot dog guy gushing about 80s movies). On that note, some of the background references and gags even work, tossing in some unexpected ones here and there. There’s an Ico signpost in one of the first areas of the game! Yes, Ico! Randal himself is a hilarious guy with a lot of great lines, making up a lot of the game’s best moments with how he responds to people giving him a hard time. Some of his quips are expected, but others are surprisingly clever. There’s a good balance here that makes the cynical humor work.

While the game doesn’t have that LucasArts style of sheer creativity until the final three episodes (the last of which must be seen to be believed), it does take notes with how it structures jokes and paces them out. It’s a mile a minute affair, with a lot of simple gags mixed in with major punchlines, plus a good deal of messed up humor not dissimilar to moments like the hamster in the microwave (which does get referenced in a not too direct way). The creators and writers were big fans that respected the structure more than the style, and that really paid off in the long run.

The presentation is far more mixed. There’s no getting around the terrible character designs, which take heavily from low brow and poorly animated adult comedies. The design of the world isn’t much better, lacking a flair until the last episode, where the entire game suddenly switches gears and throws one hell of a curveball. Oddly, the same can’t be said for the score. It’s like the soundtrack to an indie film, with a lot of twangy guitar. It’s very moody and reserved, and it works better than you’d expect. The intro music, in particular, sets a good tone for the game and avoids a wacky feeling for a somber, slightly oppressive piece. It works for the themes of the game and the world it inhabits, really complimenting Randal’s crappy life and cynical world view. The voice acting is the complete opposite situation, with a lot of great talent doing very outlandish voices, which definitely fits the humor better.

As for the game itself, it lets you pick from old school and new school style controls, with new school being more preferred for how much it simplifies things and speeds the game up. If you know exactly what you’re doing, the game takes roughly nine to ten hours, so it’s a meaty experience. The simplified, intuitive controls in the new school set-up are definitely appreciated for this reason, especially in the two episodes before the finale that lock you into a very repetitive setting. You can look at stuff, interact with it, talk to people, and of course, combine stuff in your inventory. All very basic design, which the game does make jokes about. The puzzles themselves are thankfully pretty logical, though Randal may not do what you want unless you trigger an event somewhere that tells him that he needs something to continue on. It’s a tad annoying, causing a lot of back tracking. The game does offer a hint system, similar to the one from Hector: Badge of Carnage, and like that game, it will insult you for using it. You also kill a kitty for every hint you get, so, you know, maybe don’t be a kitty killer. You monster.

About the only really obnoxious puzzles involved pixel hunting in a clover field and the very drawn out multi-step ones that go on for an entire chapter, and a lot of these require experimentation. Still, they’re not nearly as ridiculous as many of the games paid homage to here, and there’s no late game overs for not getting a particular item early on (though there is a great fake out joke revolving around this). These lesser puzzles still work on some level, though, as Randal is usually in the same state of mind as you and starts to get pretty annoyed towards the end of the game. It leads to some good gags, though it is questionable if it’s worth the frustration. Then again, that’s what the kitty killing hints are for.

This is definitely one of the better comedy point and clicks of the more modern era, throwing out a ton of great gags and characters, having solid puzzle design, and some refreshing meta awareness and moments of self-deprecation. It doesn’t fall into the same trap as many other adult humor works do, avoiding the “edgy” school of thought and sticking to a more classical structure, just with some slightly more messed up gags in there. It doesn’t always hit bulls-eye, especially the groaners dealing with women and queer folk, but it manages to come together well despite. It’s also one of the longer point and click adventure comedy games out there, so you do get your money’s worth for the twenty dollar price tag, though waiting for a sale isn’t a bad idea by any means if you’re not normally into dark comedy. Still, it’s worth trying at least once, and there is a demo if you really want to see if this is right for you.

Also, Jay and Silent Bob are in this game, making this the closest we’ll ever get to a continuation of the Clerks cartoon. Sadly, there is no joke where a bear drives a car. That is the game’s biggest failing.