Gemstorm is one of the most unique games the falling-blocks genre has to offer. At its core, it’s essentially a Columns clone. Games like this are often lumped into the “Tetris clone” category, but that’s a bit of a misnomer, as their core mechanics have some key differences. Where Tetris only cares about shapes, having you arrange falling blocks into a geometric pattern and clearing them away when you form perfect horizontal lines, Columns and its imitators have you clear away the blocks by matching up colors. But even the term “Columns clone” doesn’t quite do Gemstorm justice, as its surprisingly deep mechanics make it more than just a clone, and place it in the ring with the likes of the Puyo Puyo series.

While the specifics can vary greatly from level to level, the basic concept is as follows: lining up gems of matching colors in a row will clear them away and add one to your “drops” count. Once you reach the required number of drops, you may proceed to the next level. If you line up enough gems (usually one more than you need to get a drop), you get what the game calls a “not,” which is basically in-game currency that lets you buy power-ups. If you line up enough gems to get a not, but your nots are already maxed out, it will simply clear the bottom row of gems, instead. There are also rainbow gems, which act as wildcards; and gray gems, which cannot be cleared without the use of power-ups. 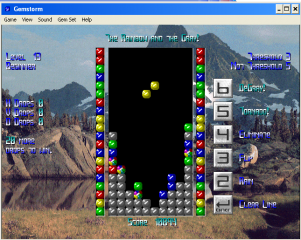 From there, it starts to change dramatically depending on the level. While in most Columns clones, the only difference between one level and another is how fast the blocks fall and maybe the number of colors, Gemstorm packs an impressive amount of variety to keep it from getting too repetitive, too fast. In some levels, it only takes three gems of the same color in a row to get a drop, and lining up four or more will give you a not. In others, it takes four in a row to get a drop, and you can only get a not by lining up five or more. There are even “bonus levels” where the not threshold is the same as the drop threshold, so every drop will give you a not. Some levels start with some gems, oftentimes gray, already piled up on the playing field.

The number of gems that drop at a time also varies between levels, as does the number of possible colors, the speed at which the gems fall, the number of drops required to advance to the next level, and the type of drops that are counted toward your progress. The game divides drops into different types: H-drops, V-drops and D-drops (horizontal, vertical and diagonal, respectively).  In most levels, you can line up the colors in any direction and it will count toward the number of drops you need to proceed to the next level; some, however, require a certain number of a specific type of drop (only V-drops, for example), to move on. The other two types of drops will still clear the gems, and can even give you nots, but won’t help you advance to the next level. 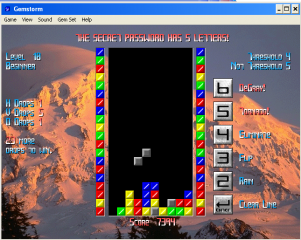 Another interesting mechanic in Gemstorm is the powerups that can be activated in exchange for nots. There are six powerups, each costing a different number of nots, with the more powerful ones being more expensive. The cheapest only costs one, and simply clears the bottom row of gems, while the most expensive will run you six, and destroys all gray gems on the board. Other powerups do things such as raining down rainbow pieces, and rearranging the gems that have piled up.

Aesthetically, Gemstorm is (at least in its original form) a mixed bag. It features a soundtrack comprised of MIDI covers of various tunes that span the spectrum of genres, but are all done in a similar style which somehow makes them all more or less fit together. The sound effects are all-around fantastic, from the synthesized click when you get a drop, to the dramatic choral “AAAH!” that greats you at the start of each new level, along with a level blurb that’s usually either a comment about the level’s mechanics, or a silly joke.

On the visual side, the use of solid black makes for a bold, dramatic look, and the landscape photography was an excellent choice for the backgrounds. The charmingly dated raster font used throughout the game would normally look rather strange when placed on top of nature photos, but the washed-out, low-depth colors give them a nostalgic look that pairs quite nicely with it. But with all that said, the gems themselves are a downright eyesore. There is very little variation between the gem sets, and they’re all typical of hideous shovelware games from Windows’ early history. Fortunately, however, this is greatly improved in version 2. 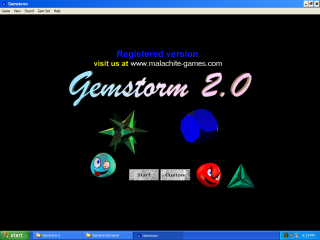 Though not quite a sequel, Gemstorm version 2 makes some very substantial changes. The most obvious, of course, is the new gems sets. Gone are the ugly circles and squares; instead, they’re replaced by much more impressive, varied and overall aesthetically pleasing pieces, some of which aren’t even gems at all! By far, the best gem set in the game is “eggs” — painted eggs with cute little faces, to be exact.  With the version 2 gem sets to top it all off, Gemstorm takes on a beautiful, cohesive look and feel made up of disparate components that should clash, but somehow mesh quite well. Overall, it’s down-to-earth, quirky, warm, and strangely otherworldly. 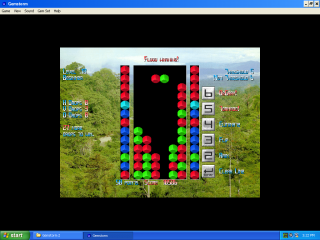 Version 2.0 makes some welcome changes to the gameplay, as well. In version 1, gems would randomly fall either touching each other, or diagonal from each other, with only the corners touching. This made it it very difficult to stack them up vertically to get H-drops, which in turn made the levels where only H-drops count particularly frustrating. Version 2, on the other hand, eliminates the diagonal pieces. Additionally, version 1’s implementation of difficulty levels was simply to skip the first chunk of levels and start you out on level 20 or 40 if you choose a higher difficulty, whereas version 2 lets you play through the entire game starting from level 1 on all three difficulty levels, and implements higher difficulty levels by adjusting the rules of each level to make it harder.

One change that was not so elegant, on the other hand, was the removal of the secret password. While version 1 had a “password” button on the title screen which would unlock a level editor if you entered in the correct password, version 2 removed this little Easter egg hunt in favor of simply making the level editor available from the beginning. This wouldn’t have been such an issue, were it not for the fact that references to the password in the help file and level blurbs were left in. The help file still claims that there is a secret password which can be entered on the title screen and that there are hints scattered throughout the levels, and sure enough, some of the level blurbs do indeed say things like “The secret password has 5 letters!” This likely caused quite a bit of confusion for many of the game’s players, and is a rather inexcusable bit of laziness. (For those curious, the secret password is “Sonya,” the name of the developer’s wife.) But the end of the day, version 2.0 is still the ultimate version of the game. Gemstorm is an amazing game, particularly if you get a hold of version 2, and if you don’t mind the pun, it truly is a hidden gem.