Known for their black-and-white striped fur, bushy tails and impossibly rancid defensive spray, skunks are quite the divisive little critters, having been associated with bad hygiene and alcoholism (among other bad traits and habits) for decades despite their good looks and high intelligence. With this in mind, it can be said that Jaleco, the company behind some little-known games such as the Rushing Beat and Ninja Jajamaru-kun series , is, in a way, the skunk of Japanese game developers, being known for their above-average titles that popped up on all sorts of platforms through the 80s and 90s and that, much like the little stinkers themselves, were seen as unlikable varmints by the general public instead of the fascinating creatures/pieces of software that they truly were, and none of their games shows the accuracy of this comparison better than Punky Skunk (known in Japan as Cooly Skunk), their late entry into the crowded world of 90s mascot platformers which, as the title implies, coincidentally stars a skunk, and a pretty punky one at that. 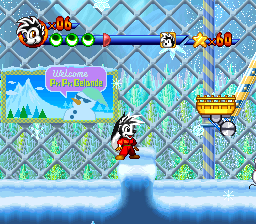 Punky Skunk‘s plot is fairly basic: The evil Badler Wolf and his army of mouse-like Chews (which is obviously a mistranslation of “chu”, the Japanese onomatopoeia for the squeaking of a mouse) are wrecking and polluting the island archipelago in which Punky and his friends Nash and Kelly live on, and the titular skunk is the only one brave, capable and radical enough to stop their evil ways. Equipped with nothing but a red jumpsuit, his stink blasts and Nash’s extreme sports equipment, the mephit departs on his quest to rid his world of BB Industries’s metallic influence alone, with his friends giving him both intel and tech support on the background.

The gameplay here is also your standard mascot platformer shtick, with Punky being able to attack enemies with both his short-ranged stink blasts (which are one of the two in-game references to his species’ infamous trademark) and a good ol’ bop to their heads, with foes often being vulnerable to only one of these two tactics. The gimmick here is that Nash’s inventions actually play a part in your quest, with them acting as powerups first introduced early in the game. Tying in with the extreme sports craze of the 90s, the power-ups are a parachute, which slows down Punky’s falls and lets him ride wind currents; a pogo stick, which sacrifices the horizontal distance of the skunk’s jumps in exchange for a higher vertical reach; a snowboard (called a skisurfer here) which is momentum-based and lets the protagonist shred through levels quickly and grants invincibility at top speed; roller skates, which often serve as an excuse for some moderately tough autoscrolling levels, a jetpack which is only available in later worlds, and clawed gloves for digging, which make for some interesting subterranean levels every now and then. All of these negate Punky’s offensive abilities except for the Diggers, which sacrifice jumping instead, and thus can be quickly unequipped with the tap of a button whenever things get tough. 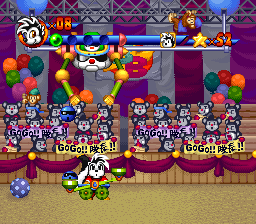 It’s only after Nash is captured and all power-ups are introduced that Punky Skunk gets really tough, with annoying enemies often crowding the screen and/or jumping out of nowhere while the player tries to land on hard-to-reach platforms. This is especially irritating in the Digger levels, where indestructible enemy generators are a common obstacle, making the hunt for extra lives and bonus rounds – something that the game focuses a lot on despite its handy save system – needlessly frustrating and ultimately unrewarding.

Combine this with the irritating boss battles – which are all uninspired minigames, much like the ones used as bonus rounds – and wonky hit detection and you have a promising mascot platformer whose potential is sadly marred due to the genre’s most common pitfalls. It doesn’t help that the game itself is unfinished, too – magazine scans and trade show sightings indicate that it was originally planned as a SNES title that was to be released in the console’s twilight years, with the project being cancelled by its original developer Visit Co. and quickly resurrected for the PlayStation by the uncredited and even lesser-known Ukiyotei team, whose previous work include the SNES cult classic Skyblazer and several SNK ports and spinoffs. Despite its troubled development cycle (or perhaps because of it), the game still reeks (pun absolutely intended) of unfinished software, with graphics barely superior to those of an average 16-bit title and a short, simple soundtrack which suffers from the usual CD-ROM looping problems. The game even runs at the lower resolution 256×224, which was usually reserved for ports from 16-bit platforms. Early previews and the back of the game’s case also indicate that several planned features – including branching map/story paths – are nowhere to be seen.

Despite all of its flaws and general unfinished state, Punky Skunk is a worthy addition to a mascot platformer aficionado’s collection for its choice of protagonist alone. Just keep in mind that the boss battles – especially the third one, which is a volleyball match whose winner is the first one to score eight points, with loss resulting in an instant death – aren’t recommended for the faint of heart, though.