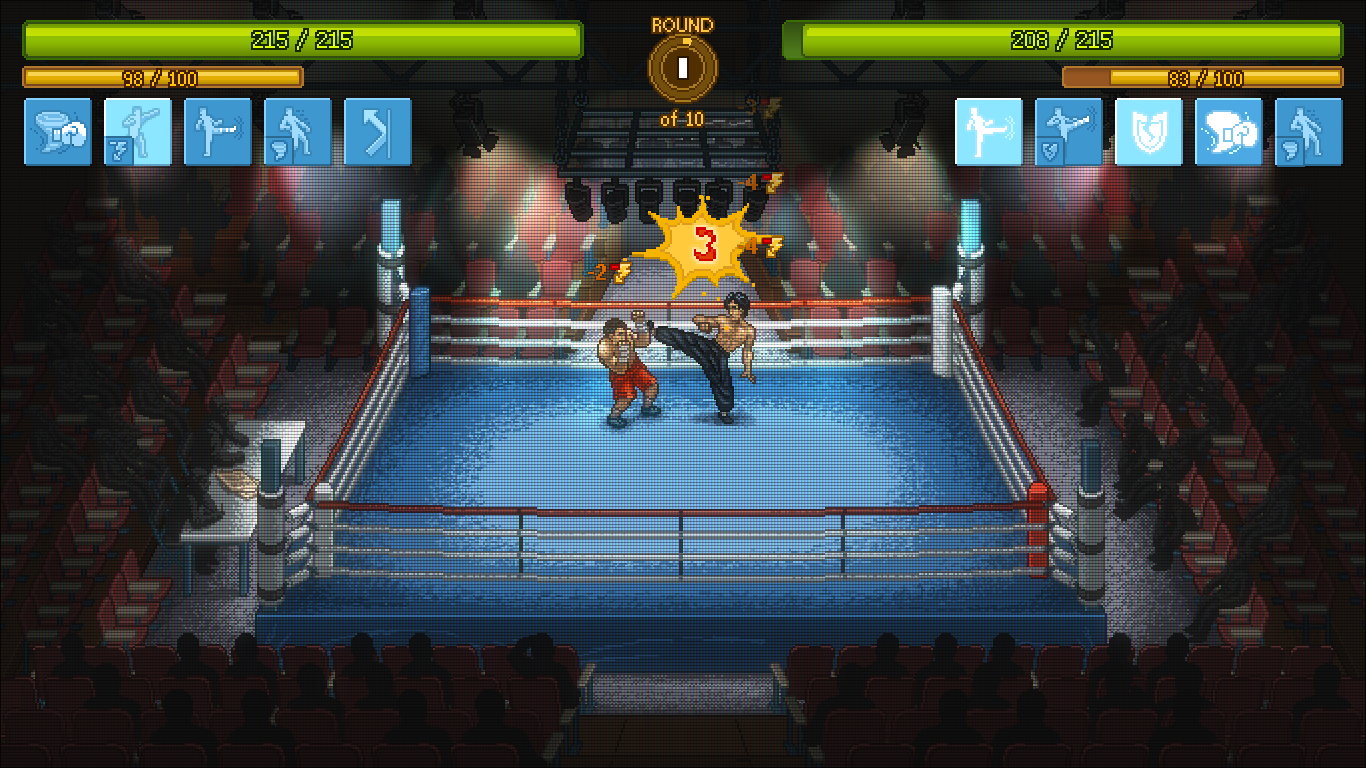 You remember how Gainax’s Princess Maker series basically invented an entire new subgenre and influenced a bizarre amount of western game design? Well, it influenced a few Asian areas besides Japan as well. For example, it influenced a small Russian studio known as Lazy Bear Games, who took that same basic design of raising a single human being into some sort of ideal of a person, and then they thought it would be a good idea to mix that with an avalanche of 80s and 90s western nostalgia, plus lots of punching. The end result is Punch Club, and man oh man, this game is aggressively retro.

The story is as “videogame” as you can get. You’re the son of a successful fighter, whom is murdered by a man in black with a gleaming red eye. A police officer friend takes you in and raises you, then flash forward years later as you meet Mickey from Rocky (like, it’s not even a clever parody, it’s just Mickey but named “Mick”) and decide to become a professional fighter while trying to raise up scratch for living expenses. Oh, and you also find a weird briefcase related to a crime spree and become a superhero, but that’s an entirely separate side quest that’s completely optional. That involves beating up Alligator expys of the Teenage Mutant Ninja Turtles. 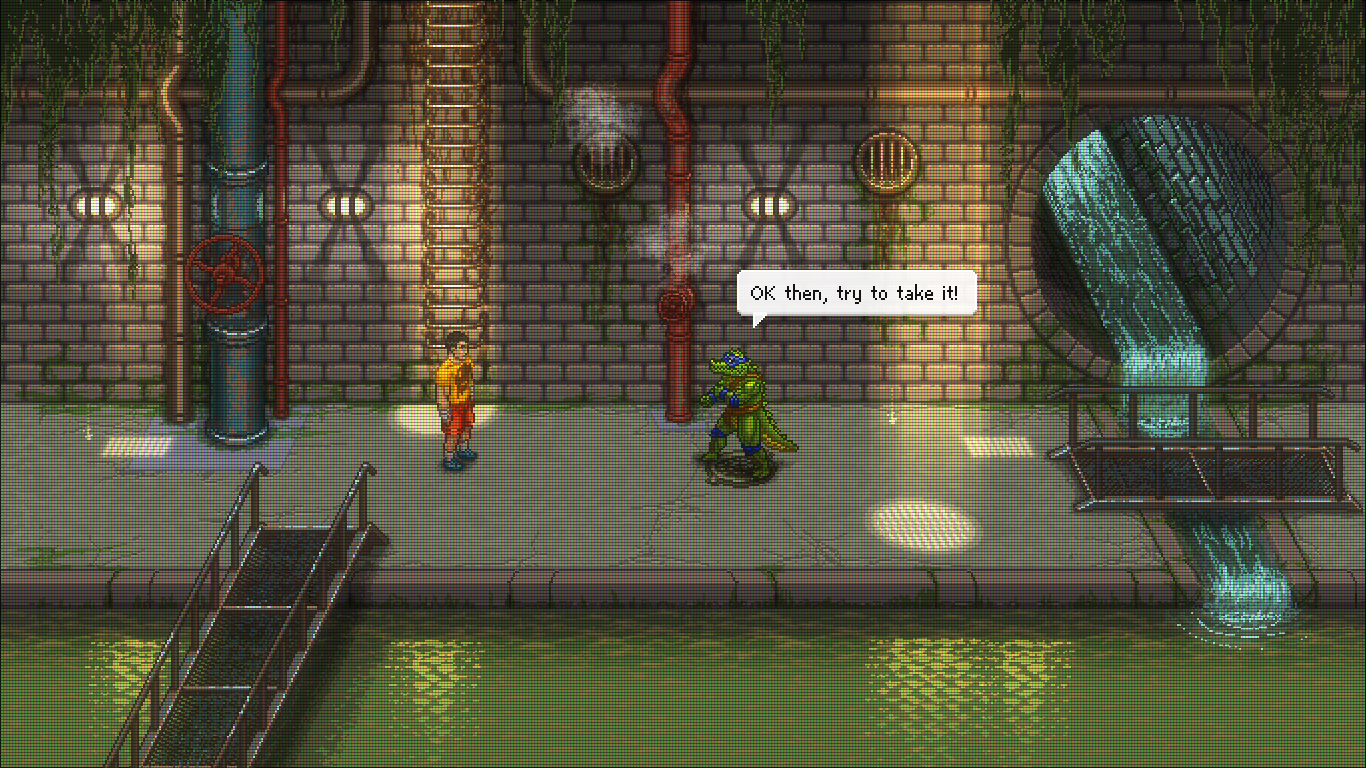 While Punch Club is nowhere near the level of crazy as Red Comrades Save The Galaxy, it shares similarities in that it constantly references 80s and 90s action schlock and cartoons whenever it can. It’s hard to go a screen without coming across near-plagiarism references. I mean, Tyler Durden from Fight Club is hiding out behind a bar and talks about self-destruction, one of the routes you can take involves fighting Zangief after he kills your best friend the same way Ivan Drago did in Rocky IV (and yes, you do train on a snowy Russian mountain), and there’s a quick store owner here named “Apu.” Also, I cannot stress enough that you fight alligator expys of the Teenage Mutant Ninja Turtles. The pizza shop owner who introduces them to you is named Casey.

Punch Club is so retro that it even has a retro filter that gives the game the look of an old arcade classic (and its definitely the preferred way to play). The graphics are in a high quality arcade sprite style filled with life and detail. The soundtrack sounds like a lost SNES game score. It ends on a cliffhanger that wouldn’t be out of place in an event comic from the dark age, and directly references one of the most famous twists in pop culture history (and you probably guessed what said twist it is). Hell, the fight right before the end is a homage to Double Dragon! Becoming world champion involves fighting Ryu, Bruce Lee, and Hulk Hogan! The Godfather is here! Yes, from the award winning, cinema changing movie, AND YOU CAN FIGHT HIM WHILE HE’S PILOTING A WALKER MECH! There’s even a Don King parody here that also acts as a King of Fighters reference! 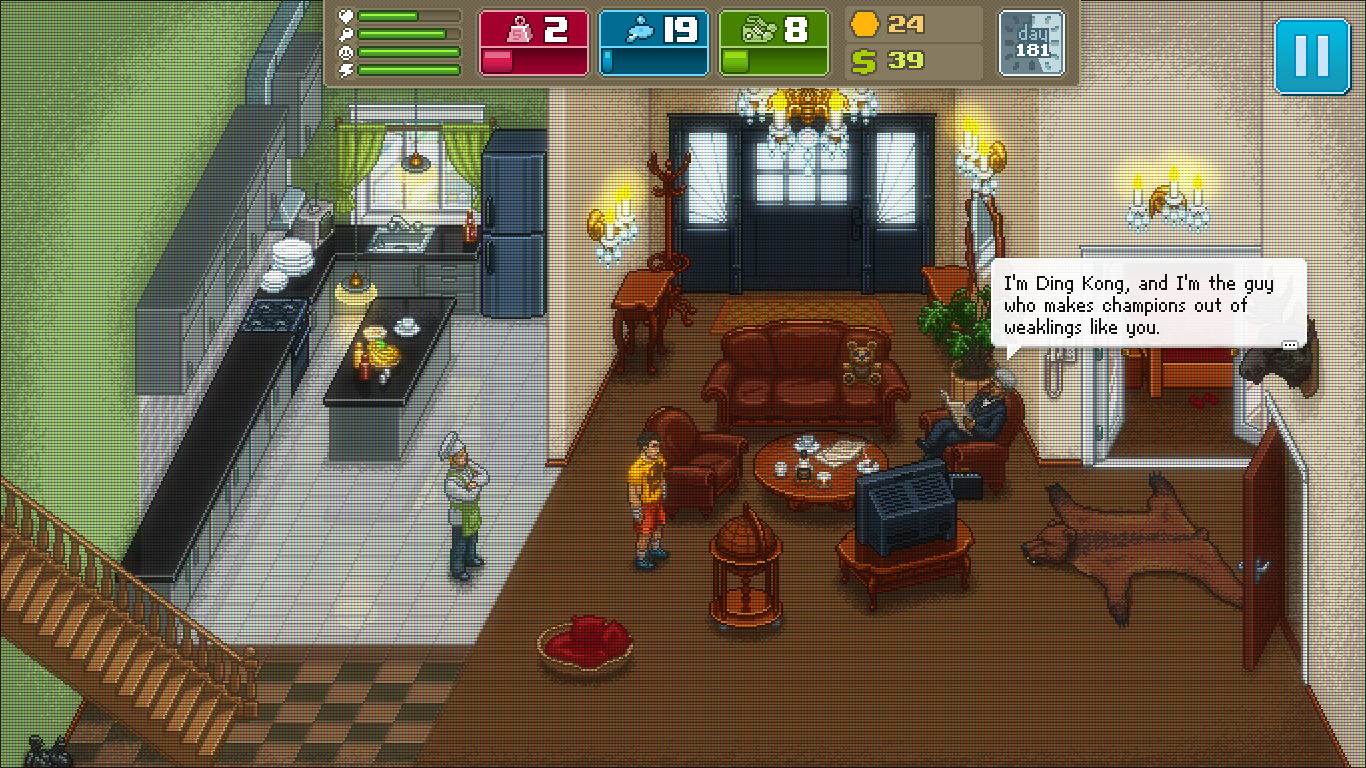 If you grew up in the days of arcade gaming, you are going to adore this game’s style. It helps the core design is great. The focus is on building your fighter and managing their fighting life with basic necessities and side quests. You have to keep track of your health (affects how much of your max hit points you have in fights), hunger (which stops you from doing anything when low), mood (because you can’t do anything well when sad), and energy (self explanatory). If one drops too low, it becomes incredibly difficult to do much of anything. On top of that, you need to earn money to eat (though Mick will give you a small amount of free meals early on), use the gym, and buy equipment for your house, among other additional things. Everything costs time, and going around with a lot of cash on hand may draw the attention of thugs, and some are ridiculously strong.

Then there’s the actual training for fights. You have three main areas to build, those being strength, agility, and stamina. But here’s the thing: All of these stats conflict with each other. Agility lets you hit more accurately and dodge more, while stamina helps regenerate energy faster and makes you generally tougher. Where things get weird is with strength, which lets you hit harder …but also drains your energy in battle much faster. Thus, the game gives you three paths to follow. Tiger has high agility and secondary stamina with no strength focus. Turtle is made for high stamina, supporting strength, and middling agility. Lastly, Bear is for high damage dealers, with heavy strength and agility for accuracy, with stamina as the least important stat. They all have their own strengths and weaknesses, and very different play styles and training to do (by the by, Tiger is best, ain’t much enemies can do once they run out of energy and you have good counter moves). You need to constantly train, even when you have the stats you want, because your stats drop every new day. If you’re not careful, you may end up becoming a weakling again. 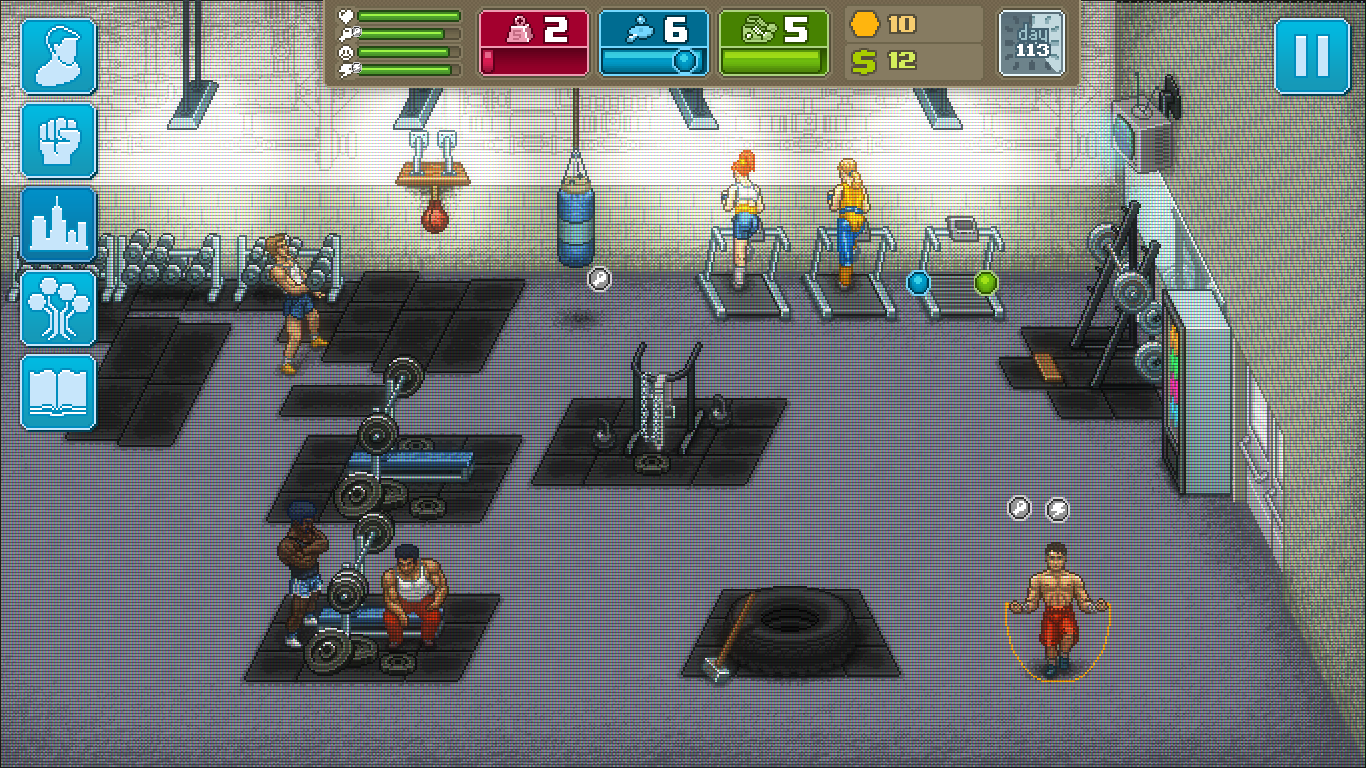 On top of this, you have four skill trees that you unlock skills and perks on with points earned from fights you win or lose. The first has basic skills, but at a certain point, you can unlock the other trees for Tiger, Turtle, and Bear, which all have specialized abilities and perks for the build, like Tiger’s tree containing a punch move that drains energy, and a perk that can increase your agility in a fight when at low health. This is where most of the customization lies, as the abilities you have for battles and the perks you gain can have massive effects on the outcome of fights. It’s more than just doing damage, you need to focus on a single strategy for your character and build them with that in mind to make them as effective as possible.

This is a game about thought and planning, despite the promise of punching people in the face. Fights proper are out of your direct control, limiting you to selecting what skills you want used during the fight, then pressing the fight button and watching the battle. This sounds annoying, but the fights proper are exciting to watch, as you see the full impact and implication behind every move through the stats shown on screen. Fights are also divided into rounds, so you can change your skill set to best fit the direction of the fight between each one. You do have control, just not the sort of control you’d expect. 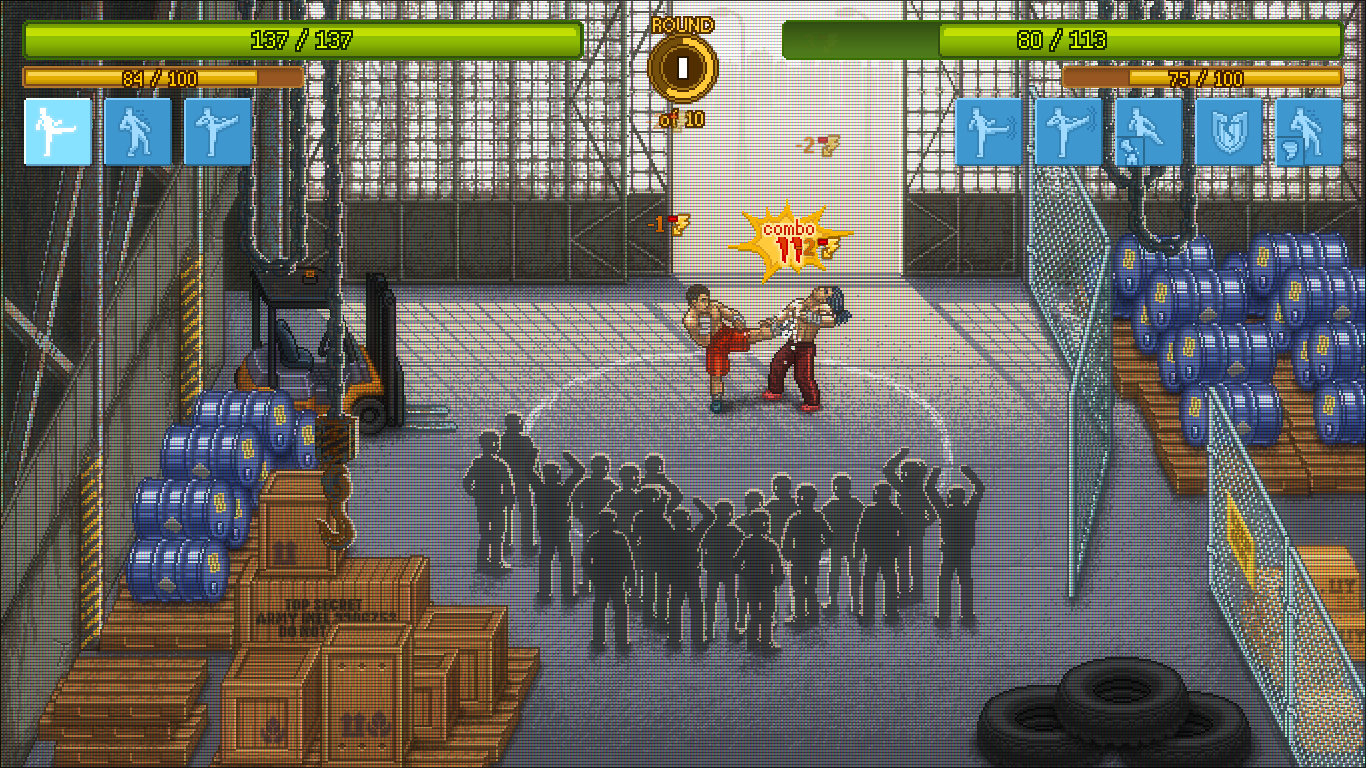 The game is very unorthodox for a sim game based around punching, but it’s very well designed and deserves all the success it can get. It certainly deserves more than it currently has. The Steam version of Punch Club sold 330,000 copies since March 22nd, 2016, which is no small feat for an indie title. However, in that same timespan, it was pirated over 1.6 million times, 1,137,000 times for PC and Mac, and 514,000 for mobile devices. While pirating doesn’t necessarily equal a lost sale, the sheer number here is incredibly demoralizing. If you want a great retro throwback simulator game, you really should pay for Punch Club. It’s only ten bucks US, can easily last ten to twelve hours, and it doesn’t require an intensive graphics card. Seriously, under graphics requirements, they listed “Toaster.” You’ll be fine.

Plus, you can punch a bear in the face and that’s always a gift. 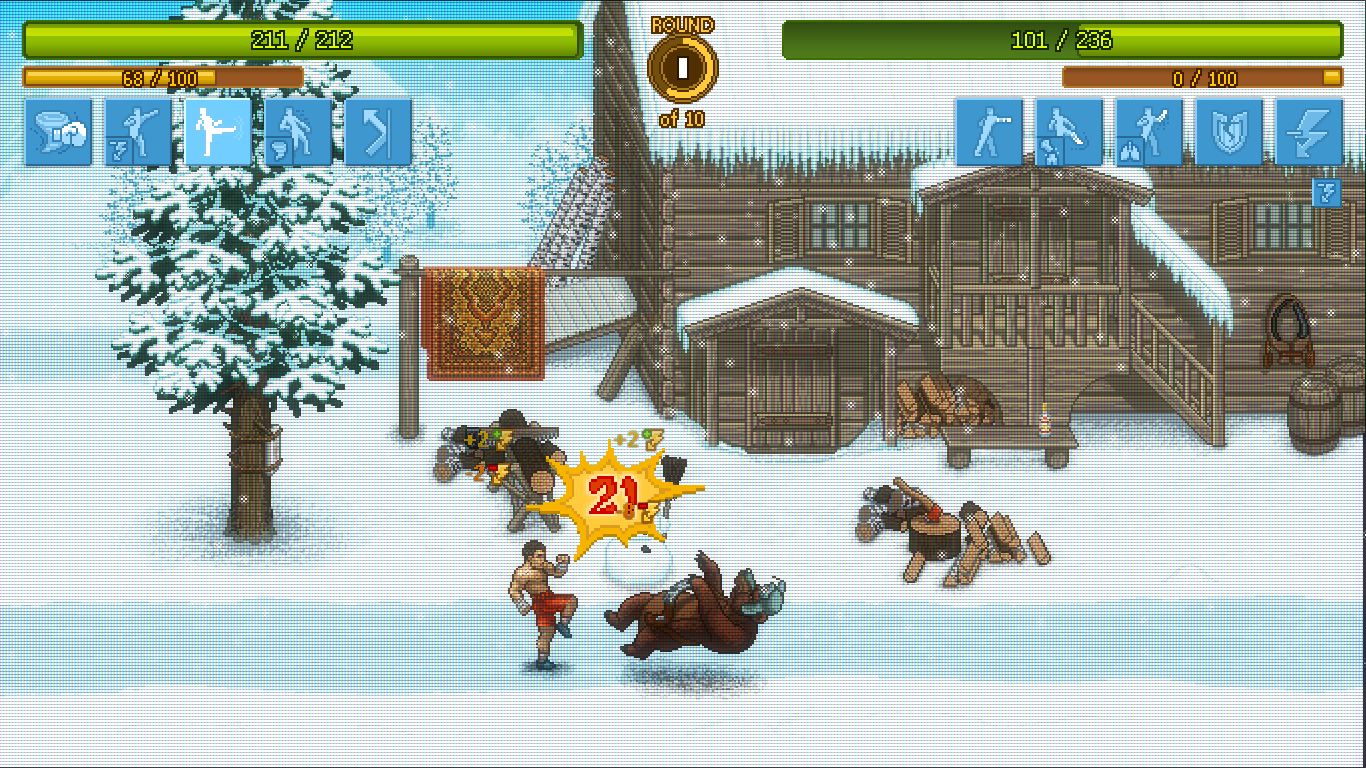 Or knee, whatever floats your boat.