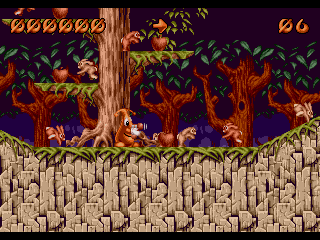 Initially released in June 1993 in PAL territories for the Genesis (with a Sega CD port the following November and an Amiga conversion in 1994), Puggsy remains one of the 16-bit era’s strangest mascot puzzle platformers. Originally, he was the star of a 1990 demo for the Amiga entitled Puggs in Space  - a short, non-interactive video created by small development team Dionysus to show off the graphical capabilities of the home computer. Publisher Psygnosis contracted Dionysus to develop a full game based on the demonstration. This deal fell through, and Traveller’s Tales took over the project, with Psygnosis insisting on retaining the alien character design from Puggs in Space. Enter Puggsy, the third title ever developed by Traveller’s Tales (who are best known now for their work on the hugely successful modern Lego games) and one of Psygnosis’ first forays on the Genesis.

The story begins with our titular alien hero crash landing on a strange planet and having his ship stolen by villainous, anthropomorphic raccoons. The game, in its original Genesis incarnation, spans an impressive 57 levels. A few of these are optional bonus areas, including the Wiz ‘n’ Liz-based ‘Wabbits World’, which was a cameo for another Psygnosis game that wouldn’t release until September of that year (Puggsy would end up returning the favor appearing in the Wiz ‘n’ Liz‘s bonus stage ‘Splat!’). The locations visited over the course of Puggsy’s journey are varied and distinct, with medieval-style castles, sunny beaches, ominous woods and snow-covered mountains, among others. 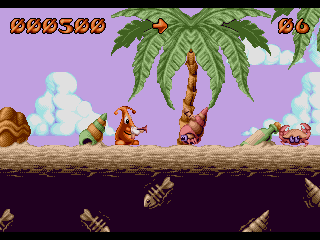 Graphically, Puggsy is charming, with chunky sprites and nicely detailed backdrops. The game suffers though from a dull palette, lacking the bold, eye-catching colors of its platforming contemporaries. There is, however, some nice background and foreground scrolling on display, and the game does an excellent job of creating an atmosphere - particularly enjoyable are the inner castle levels, in which you can spot distant clouds and surrounding towers passing by through the open windows.

There are also an impressive number of enemies. Amongst the dastardly raccoons (and all their level-specific variations), the player will also encounter the likes of hooded witches, evil sentient candles and bouncing snowmen. Some of these creatures only appear once, and it is clear that Traveller’s Tales put some effort into ensuring that each area of the game is home to unique characters. Despite this, some of the more crowded levels (like the industrial revolution tinged ‘Splinter Town’) can feature sprites that are difficult to distinguish as enemies, leading to initial trial and error deaths. Puggsy himself exudes charm and is brought to life by expressive animation. It is always fun to watch the tubby orange alien react to player input, whether that’s leaping into the air with a look of surprise on his face, or struggling to keep his footing on a steep incline.

The music is excellent and composer Matt Furniss delivers a rollicking set of crunchy, catchy Genesis tunes. The title screen track, “Opening Theme”, begins with a set of ominous, alien wubs, before kicking into a truly rocking mid-section, resulting in a triumphant, exciting amalgamation of synth keys and snare kicks. The very first music you hear in Puggsy is indicative of the game’s entire OST, which runs the gambit from mellow and sunny, to intense and moody. Stand-out tracks include the beautiful “Star Fall Lake” and the heroic, Conan-like ‘”Darkblade Forest”, both of which are captivating on a technical and emotional level, approaching the realm of (and recalling) the work of Donkey Kong Country composer Tim Wise. 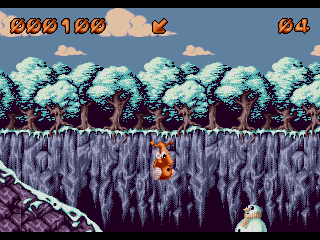 While looking good and sounding great, Puggsy is perhaps best known (by the few who remember it) for its early implementation of a physics system - as the manual dubs it, “Total Object Interaction (TOI)”. Levels within the game are filled to the brim with items, all of which have their own dimensions and properties. For example, there are barrels that float on water and Puggsy can use these to construct makeshift bridges in order to cross lakes and ravines. Fans, with strong currents that blow him backward, can be countered by carrying heavy objects (weights). The same currents can be triggered by the flip of a switch, which can blow lighter items off perches and into reach. All of these objects can also be manually stacked and Puggsy can raise and lower whatever is in his hand using the d-pad. This is an important mechanic for making it through levels as there are several higher areas that require the player to construct staircases to ascend. Ingeniously the “TOI” system also allows Puggsy to use held items to hoist himself up and over the lip of hard-to-reach ledges. Objects have unique interactions; guns can be fired to dispatch enemies; balloons inflate to raise Puggsy into the air and shields activated to gain a brief burst of invincibility.

The physics in Puggsy are ahead of their time, resulting in a lot of clever, satisfying puzzle design. Despite this, “TOI” can be finicky, occasionally feeling like a clumsy proof of concept, rather than a full-fledged system. As the player attempts to stack objects, they will often clip into each other at odd angles, causing key items to bounce uncontrollably across the screen and occasionally into impossible to reach places (the game mitigates this somewhat by implementing a reset system, which allows the player to return to the map screen without losing a life by pressing all three face buttons and start at the same time). Some of the mid and end-game puzzles are also infuriating, tasking the player with bouncing on water-bound beachballs to reach deviously high ledges. It is hard to be precise in these moments, and the water physics often eat the player’s jump input, resulting in a very wet Puggsy and knocking carefully placed items into disarray. Indeed, some of these jumps are nigh impossible without obtaining the sneakers power-up, which grants the sentient space-hopper an extra hit and the ability to jump higher. These trendy kicks are hard to come across and even harder to keep hold of, which makes their near mandatory usage a bizarre design choice. 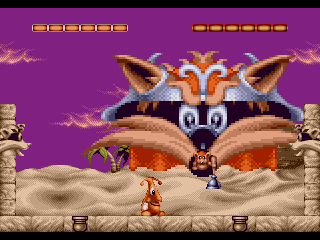 Despite these moments of frustration, Puggsy rarely asks the player to do the same thing twice and offers something new on every level. Some areas play out like the game’s biggest influence, Super Mario World, with brief platforming gauntlets solely concerned with dispatching enemies by jumping on their heads (holding down whilst doing so) and throwing items at them. The game also apes Nintendo’s classic platformer by featuring levels with alternate exits, usually locked beyond more difficult puzzles. Discovering these exits leads to bonus areas and extra paths being unlocked on the map screen. Other stages are more akin to the Oliver Twins British classic British series Dizzy (sans dedicated inventory system) and Puggsy must use a variety of unique items in the right place to solve light, adventure-game style puzzles. Boss fights also implement their own distinct mechanics, gracing both Puggsy and his adversary with a health bar, eschewing the usual one-hit deaths for something a little more balanced. Boss enemies, while not at all challenging, are at least large and impressive, with some truly fun designs (I particularly enjoyed the large, floating raccoon face, whose nose opens up to reveal a small, furry creature that throws plungers at you).

Puggsy eventually made its way state-side January 6th, 1994, with both its Genesis and Sega CD incarnations releasing on the same date. The only regional difference is a revamped, easier version of the game’s ‘junior’ mode, which is a brief, five-level long tutorial to get players accustomed to the physics system - why this mode was simplified for American players is a mystery. The Sega CD version features new bosses, upping the total count from six to nine, revamped CGI cutscenes and of course, a remixed, CD-quality soundtrack. While these additions should make the Sega CD version of Puggsy the definitive choice, the new soundtrack lacks the distinctive 16-bit crunch that made the original OST so catchy, leading to a weaker (and truncated) musical accompaniment. The new cutscenes are also lacking, foregoing the charm of the sprite-based Genesis version for ugly, early 3D models. 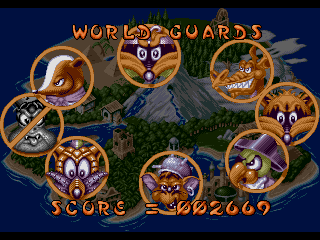 While the new bosses are interesting and help round out the experience (even featuring an impressive fight against an FMV animal jet that mixes 2D and 3D stylings), they do not make up for what is lost. The Amiga port, which was a stipulation of Psygnosis’ original contract with Traveller’s Tales, is more of a demake considering the weaker hardware of the system. It looks worse and runs slower than both of its Sega counterparts, the only saving grace being Tim Wright’s (the composer behind both Lemmings and Wipeout) excellent rearrangements of Matt Furnis’ melodies. Coincidentally, Wright was also an original member of Puggs in Space developer Dionysus, bringing Puggsy’s brief career full circle.

At one point, a SNES version of Puggsy was also in development, but shelved due to the poor sales of the Genesis version. This port was, reportedly, eighty percent complete when it was scrapped. It wasn’t until May 2022 (almost 30 years after the game’s initial release) that the long sought-after ROM file for the SNES prototype was made available to the public, courtesy of The Cutting Room Floor. This version of Puggsy, even in its incomplete form, is incredibly similar to the Genesis version, only sporting very slight UI differences, running at a lower resolution, and with a rearranged soundtrack that never quite hits the highs of the Sega-based original.

(It is also worth mentioning Puggsy’s semi-famous anti-piracy system, which detected if any SRAM was present (almost always the case for bootleg Genesis carts) and if it was, allowed players to experience the first few levels of the game with a nerfed jump height before flashing a message asking them to stop playing this ‘silly copy’. Genuine versions of Puggsy contain no SRAM at all, which means no saved games, and Traveller’s Tales opted to circumnavigate this with an old-fashioned password system.) 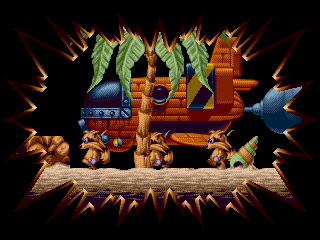 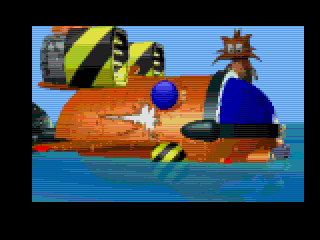 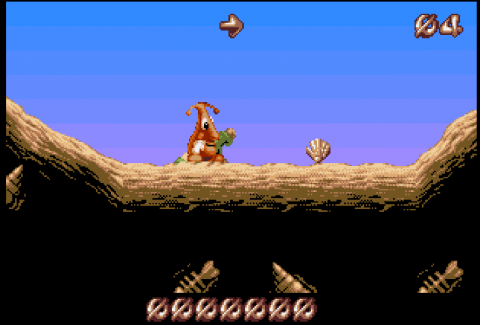 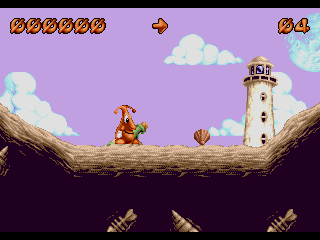 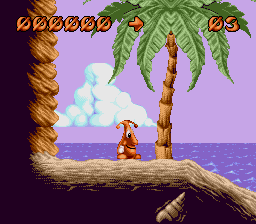 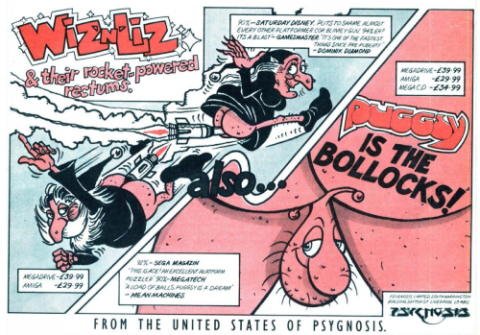