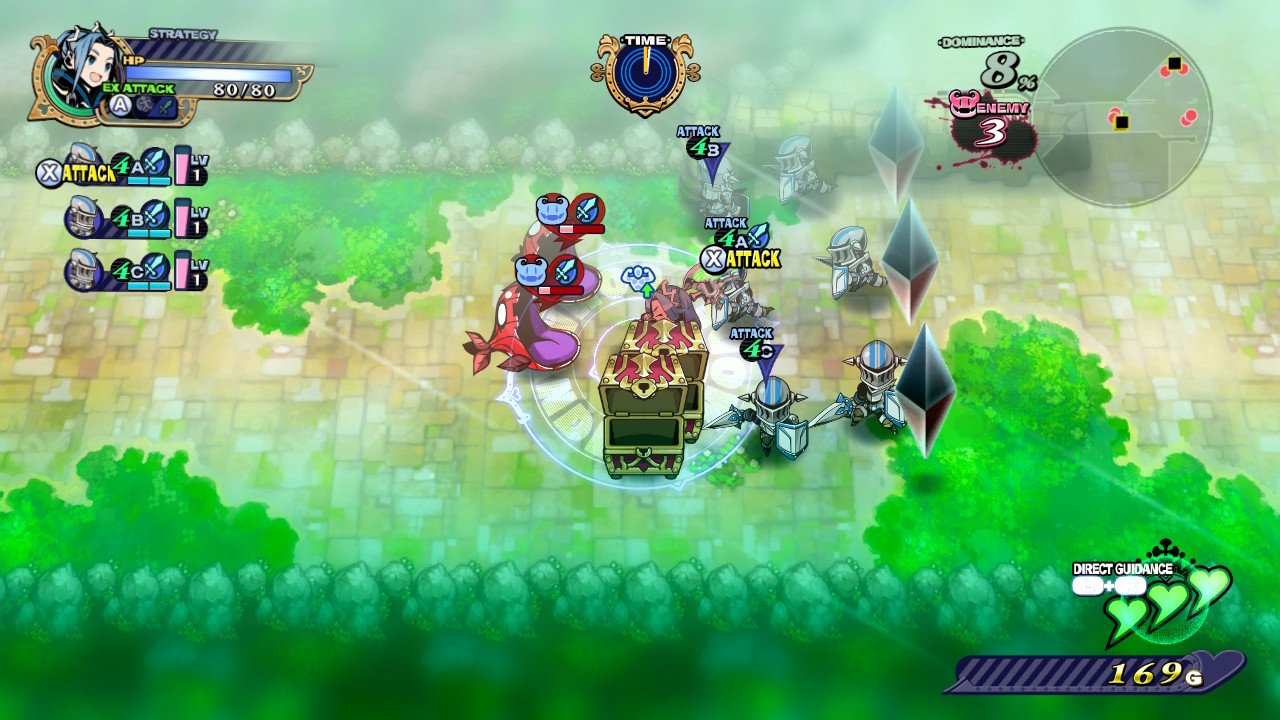 Nippon Ichi’s The Princess Guide starts off with a lot of promise. Your goal is to train four princess in how to best defend their people. The premise sounds a bit like Gainax’s classic Princess Maker, while the map screen, where you move little characters between different lands on a board, seems to recall strategy games like Sega’s Dragon Force. And yet, in practice, it’s basically a sequel to the developer’s previous title Penny Punching Princess, a line which could’ve been drawn more clearly if there weren’t already a number of other princess-themed games from the publisher (The Liar Princess and The Blind Prince, Battle Princess of the Arcadias, Little Princess, etc.)

You can pick from one of the four princesses to train in a relatively short scenario where you need to complete a handful of missions. Then you need to play through the other three’s sections, before finally choosing one to herald into the end game. You control the princess (or other units) on the map screen to start missions, then actually execute them in action sequences. There are only a handful of mission types, ranging from “beat these enemies within the time limit”, “protect this civilian unit” or “protect this square for a certain number of turns”, but ultimately, this just results in different contexts for combat. These are presented sort of like a simple overhead dungeon crawler/beat-em-up, where you roam around and pummel everything until the game has had enough.

Each of the four princesses has their own unique attack power – Veronica has magic, while Monomaria uses guns, for example. You also have an avatar to represent your own character, which you can take into combat. The advantage to this unit is that its experience and levels are carried over between scenarios, whereas each princess starts from scratch. The units are also accompanied by a collection of soldiers, who have their own special attacks to smash up bad guys. The areas are also littered with “relics”, which are basically traps that can captured and commanded at will to petrify, crush, skewer, or otherwise torment any bad guys that step onto it. These have limited uses, and since you’re rarely in one room for too long, they don’t have a major part in the game, but it sure is fun luring dumb enemies to be sliced by a buzzsaw. As you progress though levels, capturing relics and killing foes, you also increase the “Dominance” percentage, which also unlocks other limited use abilities that can increase your offense, defense, or heal your units. New weapons can be found, which also give special attacks in addition to increasing damage. 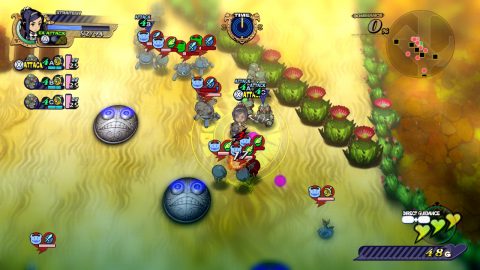 These segments are fun, as they were in Penny Punching Princess, but pretty chaotic. Enemies telegraph their attacks well – there are even comically gigantic warning messages that show where projectiles will land – but between the main character, their guards, the relics, the enemies, and all of the items that come exploding out of them, it’s hard to actually see much of anything. You have a dodge dash move, but due to all of this, as well as the perspective, it’s also tough to gauge and avoid enemy attacks, so it’s handy that there are several different ways to heal yourself.

The key element to the game – the reason why you’re the “princess guide” – is that you can either scold or praise the heroines at various points. During the story sections, you’re forced to make a choice based on her attitude. During the action segments, you can praise/scold her up to three times, granting her a stat bonus for the rest of the level, as well as restoring her health. Depending on when you perform this, it increases certain parameters. Performing certain actions will also unlock materia, basically achievements that can also be used to teach the princess attributes and increase their stats. 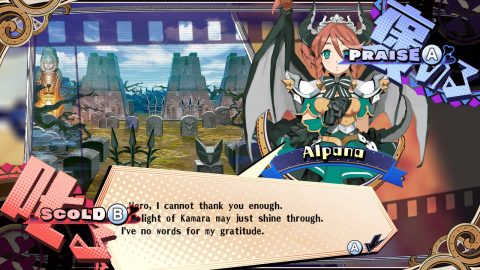 All of this is extremely vague. When teaching her materia (which is a bad name considering some other big name RPG already used it twenty years earlier), the stats include Strength, Wisdom, Spirit, Moral, and Faith…but, functionally, what does most of that actually mean? Moreover, why does it even make sense to scold the princess in combat? You’re controlling her directly, and the only action she can perform is running and killing things, so what is there to reprimand, exactly? 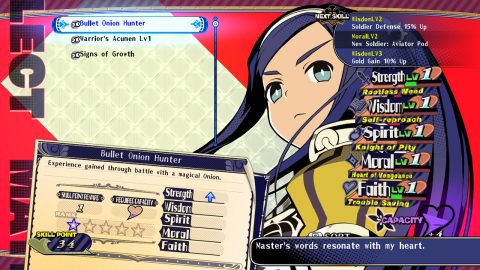 The Princess Guide excels at this sort of overcomplicated nonsense. That kingdom map screen sure looks like a strategy game, but there’s no consequence to enemy movements – no areas to defend except the ones in certain missions – and ultimately it feels more like a glorified level select. At a certain point in the princess’ development, you can play something called Virtual Training, a simple minigame presented in a retro 8-bit style, but this too feels meaningless. Units on the map have a limited amount of AP, so they can only stay active for so many moves and need to periodically rest, but this value is so high that if you play normally, it’ll never even come close to running out. You can create extra units in addition to the commander and the princess, but there’s never really any need to. It might be good to have an extra unit on hand in the cases where you need to clash with certain enemy units in a time limit, but you don’t need to doe this if you play correctly. Further, the whole point of the game is to train the princess, which you can’t do if you’re not controlling them. You can’t praise/scold any non-princess units, which also removes one of the major ways to heal them, putting them at a significant disadvantage.

The list goes on and on. There’s so much stuff in this game, much of which seems to have been implemented without much thought or purpose, to hide the fact that this is still just fundamentally a game where you smash a whole lot of stuff and watch numbers go up. To some extent this kind of characteristic of Nippon Ichi SRPGs like Disgaea, but in those games, there were clever mechanics (like the Item World or the Dark Assembly), and you could concretely understand the effect of your efforts. In The Princess Guide, not so much.

The story is also not particularly interesting. In spite of the sim aspects, don’t expect anything too complex when it comes to characterization, as the princesses are painted in large, stereotypical brushes. Liliartie loves meat a little much, Veronica is a tsundere who threatens to constantly threatens to turn you (or other characters) into toads, Alpana rattles on about “faith” to the point where she sounds like a zealot, and so forth. It is neither a daughter raising sim nor a dating sim, either, which makes it feel like the central concept lacks focus. 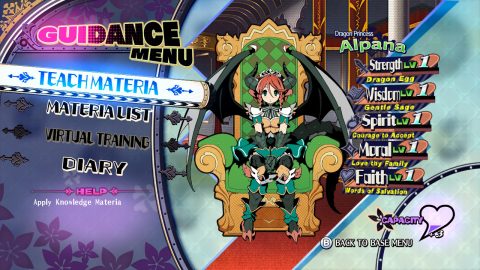 The artwork is done by Madoka Hanashiro, the illustrator behind The Witch and the Hundred Knight 2, and it’s technically very attractive. But all of the character portraits are animated with an extremely exaggerated, never-ending bouncing. Not only does it look ridiculous, where one might assume it’s actually a programming glitch, but it’s also distracting to the point where it’s hard to concentrate on reading the text. The other in-game graphics are obviously low budget – it was developed with the Vita in mind, after all – and while they’re not bad, the Switch version does suffer from substantial frame rate loss whenever there’s a lot of action on the screen, which is common. The interface is pretty, but also unnecessarily confusing, with commands that seem redundant, and a seeming inability to obtain basic information. The map will tell you how long you need to complete a mission, but figuring out its goals is more complicated than it should be.

Nippon Ichi fans that expect expansive post-games will be disappointed that there’s not much here – you get a true ending if you’ve trained your princess well, but considering how tedious the game can be, it might not be worth it to max them all out, and there’s not much to find or unlock anyway. But casual players can finish a single run in maybe six or seven hours, and it’s the sort of game that works well for brief spurts of portable play. 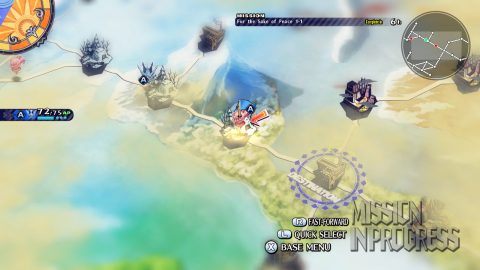 The Princess Guide is in that weird spot where it is, by most metrics, a gigantic mess. But it’s still actually kinda fun, just because beating up scores of enemies in a brightly colored environment to catchy rock music will always have a certain kind of allure.  But one can’t help be disappointed at how many aspects don’t connect with each other, or how a fully formed Dragon Force/Princess Maker action-RPG might end up, if the proper amount of budget and care was put into it.