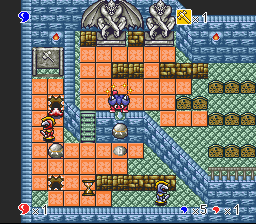 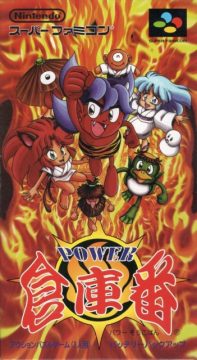 The Nintendo Power service of Japan was a method for downloading ROMs of Super Famicom games directly onto a blank flash cartridge. The service was only available at specially set up Nintendo Kiosks in select convenience stores. After buying the initial cartridge, it could be brought back and rewritten as many times as you please, for much cheaper than it would cost to buy the game fully outfitted with its own box and cartridge. With 32 megabytes of storage, the cartridge was advertised as holding up to seven games at once, but the actual number may vary depending on the size of the ROMs.

The service was later expanded to include Game Boy games, and for a short while in China, Nintendo 64 titles as well. In 2007, after one decade of operation, the kiosks were dismantled and the service discontinued. 1999’s Power Soukoban, developed by the now defunct Atelier Double, was one of a handful of  games uniquely obtainable through a Nintendo Power kiosk, but was successful enough to warrant a retail release later that same year. Unfortunately, the title never saw a release outside of japan due to its proximity to the launch of the N64. As one can ascertain from the title, Power Soukoban is a derivative of the 1982 Sokoban for PC-88, freshly updated with modern (at the time) graphics and controls. 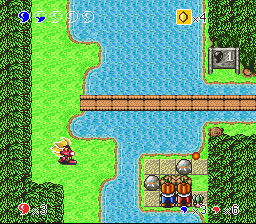 The story begins with the protagonist imprisoned in a jail-cell. By talking to your fellow inmates, you ascertain that your captors are the notorious Western Monsters, and that for peace to be restored the portal between their world and the world of yokai must be sealed. You also learn that as an oni, you’re the only yokai strong enough for the job, even if you are just a kid. Such is the relatively flimsy excuse that sets up the main gameplay mechanic of pushing boulders to plug portals in the hopes of halting the Western Monster onslaught that is capturing yokai all across Japan, and as you come to learn later in the game, even killed your father.

After escaping through a conveniently placed crack in the wall, you find yourself in the middle of a green-hued dungeon full of monsters, rocks, and ostentatious statues of demons. The levels are segmented into a series of square rooms like a Legend of Zelda Dungeon, with each room containing a puzzle or an NPC to give you hints. Also like a Zelda game, the grid-like map of the dungeon may overlap, with multiple interconnecting entrances to the various rooms. Luckily, exploring is manageable and intuitive thanks to a dungeon map accessible via the menu select screen. Checking this map informs you where you are in the level, which rooms have been completed, and which have been skipped in their entirety. 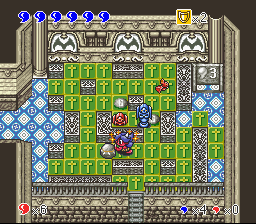 Along with the interconnecting maps and yokai flavor, the game is further distinguished from the original Sokoban by the inclusion of energy attacks. By holding A the oni can charge up his “spirit blast”, even briefly acquiring golden hair like a Dragon Ball Z character. Once charged, the beam flies slowly across the screen, but can be steered in order defeat enemies and push blocks from afar at the expense of not being able to move your character. While this mechanic works well in most regards, it does get irksome to steer it over pit only to have a monster spawn and interrupt its trajectory. And while the energy blast may help you out of a few scrapes that would otherwise lock you out of a solution, you quickly learn that relying on it as a crutch is something best to be avoided. Carefully maneuvering an energy-blast from halfway across the screen only to accidentally push a boulder into a corner because of lagging controls is an endless source of frustration.

As long as a puzzle remains incomplete, you will faceoff against a neverending barrage of enemies. Luckily, the threat the enemies pose are minimal, and their pestering will rarely, if ever, overwhelm the player. This is in part due to an AI that doesn’t target the player so much as cause the enemies to amble leisurely across the screen. By the final area, enemies do enact some rudimentary pathfinding towards the player, but even then the chase is halfhearted and unaggressive. Difficulty is further alleviated by the enemies frequent item drops, consisting of life replenishing hearts, time-stopping hourglasses, and clean clearing bombs. The enemies may not distract from the puzzles, but they also never develop into interesting obstacles for the player to overcome. Most likely the enemies exist just so the game could advertise itself as an action-puzzle title and expand its target audience. 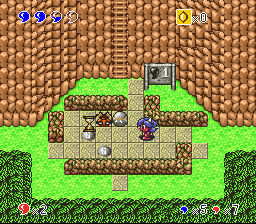 The puzzles themselves are likewise lacking in challenge, but interesting enough to not be mind numbing. Rooms on average may take one or two resets before cracking, or less if this isn’t your first Sokoban. Figuring out at the onset how much flexibility you have in reaching a solution and saving the rocks with the most potential for last is a surefire tactic for solving the puzzles quickly and without frustration.

The enemies do get steadily stronger as you progress through the game, but as you complete the puzzles, so should the protagonist. Upon solution of a puzzle; you may obtain a red or blue soul represented as a teardrop. Collecting 10 of each color will increase either your strength or health respectively to a max value of eight. Though possible for the player to rush past every level and make a beeline for the final area, it’s not advisable as the enemies grow harder to kill and your attacks much weaker. As long as you complete puzzles as you come across them, any changes in enemy abilities will be imperceptible to the player.

In addition to souls, you also collect weapons, ranging from mallets to swords, crystals, and crosses, that can be fired against the area’s boss in lieu of an energy blast. Each successful hit removes a massive chunk of health from the bosses lifebar, but once the weapons are depleted you resume the battle interminably chipping at the bosses health with normal attacks. In such a scenario it’s usually quicker to just reset the game and try again with better aim.

Overall, the game lacks variety, but is short enough that it doesn’t really matter. There are four areas to the game: the dungeon, mountain, forest, and castle, which changes up the scenery at least even if the gameplay remains static. Outside of an odd room with a rotating bar of fireballs, there are no stage gimmicks to spice things up, nor an expanding complexity or nuance to your moveset. You do gain a few special moves as you progress, but they are not incorporated into the puzzle solving. Instead, special moves function more as a lock-and-key mechanism that allows you to access new areas. There is a rope ladder to help you climb broken pathways. The rope ladder leads to the winged boots that let you jump down cliffs. The winged boots are crucial for obtaining the red boots that let you walk in water. Finally, the red boots allow you to obtain the final key, necessary for opening doors in Dracula’s castle. All rather underwhelming, and nothing you’re going to use more than once or twice. 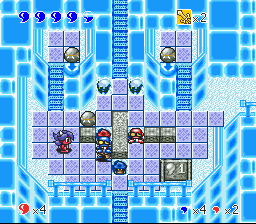 What isn’t underwhelming, is the games charming pixel art representations of the various yokai, including the likes of kappa, kitsune (foxes), kasa-obake (umbrella demons), among others. The main character too has a few expressive animations, such as a celebratory victory dance that causes his pants to fall down, or the way his belly inflates before spitting out a spirit blast.

The games enemies are designed after the monsters of Western canon. For the bosses, there is Frankenstein’s monster, sea serpent, giant wolf, a witch, and Dracula himself. Regular enemies are likewise suits of armor, jack-o-lantern headed scarecrows, zombies, mobile iron maidens, and bats. If The developers were truly going for a western monster theme, there are certainly some odd omissions. If including Dracula and Frankenstein, wouldn’t it have made more sense to round the group out with a werewolf and a mummy?  Still, it makes for a fun setting, even if underutilized. While the game doesn’t bring anything new to the puzzle genre, it is a harmless way to pass a few hours, and the method by which it was released makes for a fascinating little blip on the history of videogames.