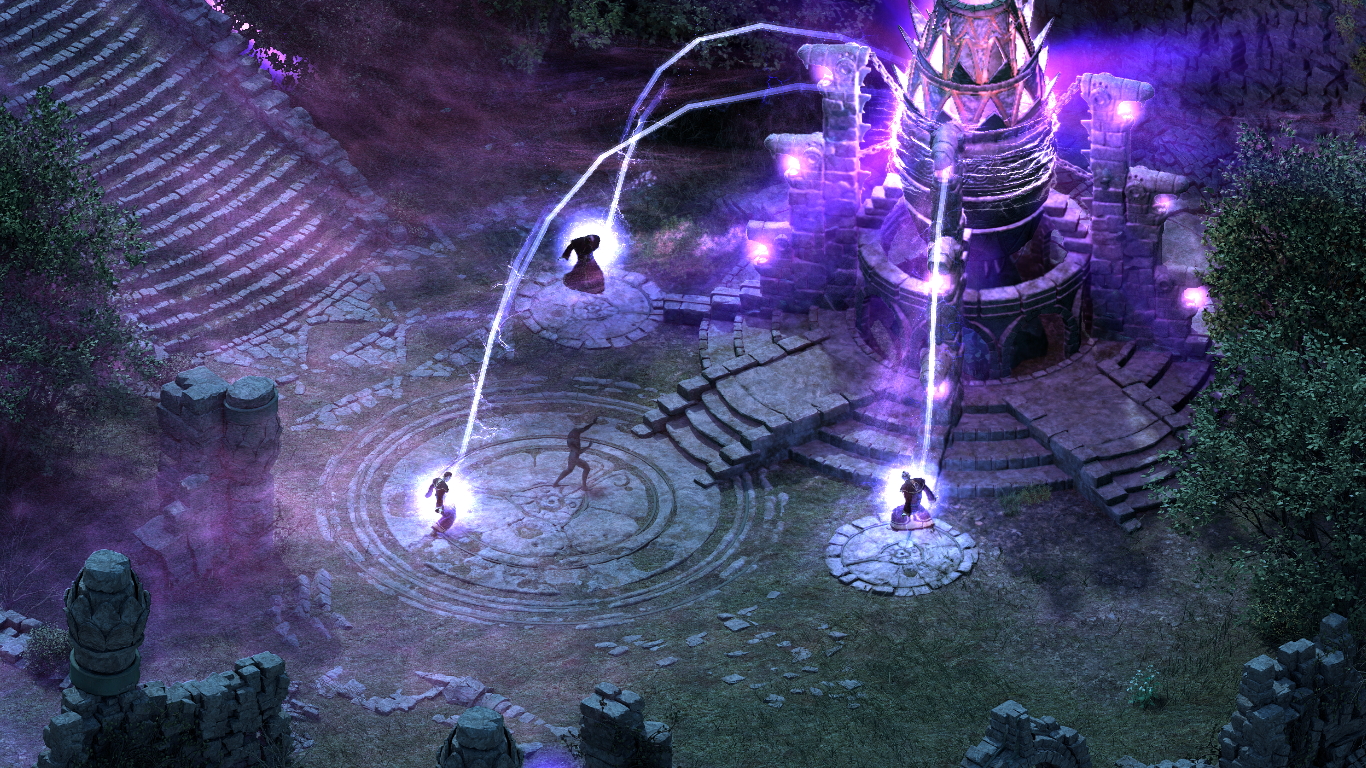 After years of licensed games, spin-offs for larger franchises, and a failed attempt at their own original series, Obsidian found themselves deciding to tackle the RPG market by going backwards instead of forwards. In bad financial shape, they resorted to crowdfunding to start developing a throwback to the Baldur’s Gate era, a new isometric CRPG that would double as a full on IP under their ownership. That game ended up being Pillars of Eternity, which managed to thread the needle between pleasing old school RPG fans who have been waiting for a really meaty experience the Bioware age hadn’t given them, while remaining accessible to those new to this sort of game. It’s not terribly original at first glance, but like most Obsidian works, Pillars ended up being far more than it seemed on the surface, and managed to keep the studio afloat until Microsoft bought them up. 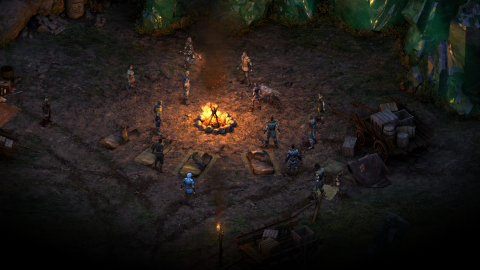 The events of this game take place in Drywood, while other nations are busy trying to colonize it. It has been scientifically proven that souls exist, creating all sorts of existential and moral quandaries. There’s even a mass disease in the country making children get born as Hollowborn, or soulless husks, but that isn’t your immediate concern. No, your character has recently arrived in Drywood (and you can choose the why) and has found themselves attacked by a band of the land’s native population, the Glanfathans.

Before anything can really come of that, a magical, soul devouring storm blows through, devouring friend and foe alike, and you just barely manage to escape. This leads to you finding a masked man activate a machine a turn a man to stone, and you pass out with mysterious visions. You soon discover you can see and talk with spirits and are known as the “watcher,” and you may be driven mad by spirit visions if you don’t stop them. Thus, you must follow the clues and find the masked man and his group for answers, gathering a party of adventurer as you go. This includes…

Aloth – An elf mage you meet about to get beat-up by a gang of angry drunks due to a dirty mouth he denies he has. He ends up being closely tied to the events of the main story, unlike much of the rest of the cast. He has a lot of strong starting spells to work with.

Edér – A human warrior and a survivor of the old Saint’s War, which has left him in a crisis of faith, no longer fully believing in Eothas. He’s a bit cynical and idealistic at the same time, and you can help him figure out just what he really wants to do with his life.

Pallegina – An avian godlike (those born with traits of gods) paladin from the Vailian Republic, mostly caught up in serving her political fashion by following you. A cynical realist with a bad childhood, you can usually count on her for the most down to Earth opinion on things. Also wants to punch bird god Hylea in the face for probably being the reason she’s a bird woman people get freaked out by.

Durance – A human priest of the fire god Magran, and objectively the worst human being alive. The old bigoted fan of war crimes is following you for his own reasons as he says awful things constantly. Nobody likes him and he probably smells. What’s interesting about him is that his personal philosophy is contradictory, and he seems aware of it, and the reason may surprise you.

Grieving Mother – A human cipher (a type of musical soul mage) who wants to end the Hollowborn curse or illness. Only the watcher can hear or see her, but it’s not clear if it’s because of her magic or because she’s a ghost or something. The only completely altruistic party member, though her methods could have unexpected consequences.

Kana – An aumaua (a giant race) chanter from the island nation of Rautai, here to find and learn from an ancient book for the sake of his people. He’s an optimist with a philosophical and scientific mind, and you can have the most impact on his world view through his personal quest.

Sagani – A dwarf ranger from snowy lands who’s come to Drywood to find the reincarnation of her tribe’s last leader. She’s been at it for half a decade and is starting to worry about her husband and children, trying to figure out if this journey was even worth it.

Devil of Caroc – A character you can get in the White March expansion, a lost soul animating a bronze golem who thirsts for revenge, having gone mad from a grave injustice done to her. Her endings are not happy ones, you will not be surprised to discover.

Zahua – A White March expansion addition, a human monk who wants to fulfill his teachings to the fullest and become the most awesome of the Nalpazca monks. Notably obsessed with pain, but less as a sexual thing and more a battle philosophy sort of way.

Maneha – Another White March addition, she’s aumaua barbarian from Rautai more interested in experiencing the world that looking for lost knowledge. Loves adventuring and having fun, and is currently searching for the Abbey of the Fallen Moon for her own personal reasons. Probably the most upstanding person in your party who is not also some sort of magical soul ghost. 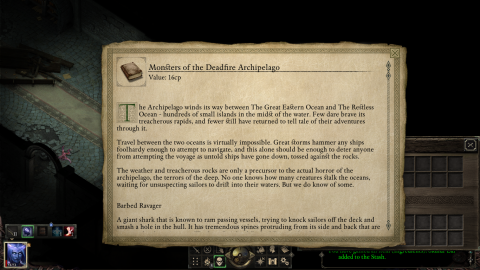 Pillars of Eternity has so much content that it’s almost terrifying. You can just enter a new area and find yourself exploring it for hours, stumbling onto countless side quests or surprising complexity. You can find and run a castle base for various benefits, to give you an idea just how much stuff is in this game. The White March expansion is arguably too much content, giving you a meaty new main quest and even more side content in a new set of maps. It’s a buffet of stuff to do, and all of it is very well written and connect to the game’s central themes of truth, lies, and faith. Does something have meaning, even if it’s not true? Where do you turn for answers when science and fact can’t begin to understand the problem? Is a painful reality worth suffering through when you can find a fantasy to escape in?

Every single quest draws back to these ideas in some way, alongside plenty of general political questions and conflicts. There’s depth and thought here that the 3D Western RPG scene rarely allowed, or allowed in such a fleshed out way. The sheer amount of stuff that can change with your decisions and actions is also staggering, with the usual Obsidian touch of a wildly changing final main story conflict. The reputation system makes for a fun replacement for the usual morality system, changing how NPCs interact with you based on how people interpret your previous actions and decisions via a set of personality traits. The surprising number of voiced lines is just icing on the cake. 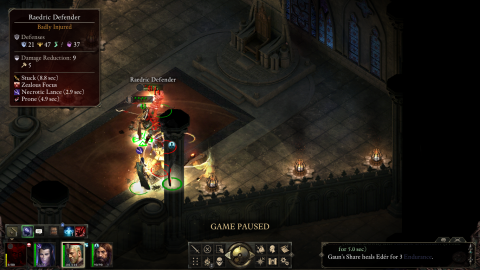 There are a ton of difficulty options to work with too, so those new to the genre can get a grasp on it through an expansive first scenario and a story mode that downplays combat. It’s nice to see, while more experienced players have plenty of challenge options at their fingertips. The combat system also has some interesting ideas, like being able to take spells from spellbooks to customize your mage party members your own way, or the formation system creating some tactical options for going into fights. There’s plenty of variables to take into account, making combat plenty entertaining in itself. If you really like that system, you even get an entire massive dungeon crawl to explore to your heart’s content, complete with a super difficult bonus boss and some side quest content.

Actually starting the game is a different story, just do to the sheer amount of stats, talents, and other stuff you can put into your character. It’s an in-depth system that’s a bit much for newcomers, though you can hover over swords to get more info on what does what and what could be useful for your build. They even mark what stats will be most important for your class. It’s just that the sheer amount of options presented is overwhelming, which may be the game’s greatest quality. It’s massive, and it respects how you want to play your character down to the most minuet details. 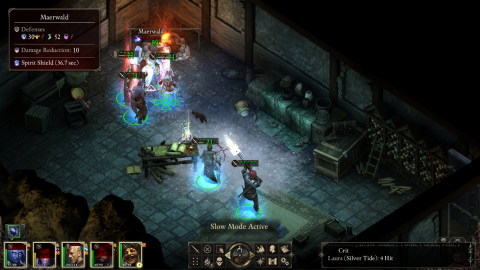 The environments are detailed and littered with secrets. Events are often set for certain hours and reward re-exploration at different times on the game’s clock. Many NPCs have long conversation trees to explore. Kickstarter backer characters are thrown about the world, and you can use your watcher abilities to read a bit of fan made fiction. The sheer amount of solutions you can find for quests is staggering. Pillars of Eternity is dense, taking advantage of the more simplistic graphics to really fill the world with stuff to do and find, so dense that trying to experience every bit of content in one run could easily take over a hundred hours. The sheer level of quantity and quality is a real mark of Obsidian’s staff and the mountains of experience they’ve had in the industry. There are few RPGs, let alone games, that can reach such levels.

Ironically, this might be the game’s biggest flaw. There’s just so much text and quests and secrets that there’s a good chance you’ll be overstuffed if you don’t pace yourself. It’s easy to lose yourself in collect-a-thons or complete the marked stuff in other open world games or open ended RPGs out there, because the content is so low energy that it becomes engaging on a base level. Your instincts take over a bit, and things reach a point of flow. Pillars of Eternity is like a buffet of high end deserts and kobe beef, and trying to take in that much richness will eventually become a dreadful experience. Yes, somehow Obsidian managed to make a game so good that you can actually get disgusted by indulging in too much of it. 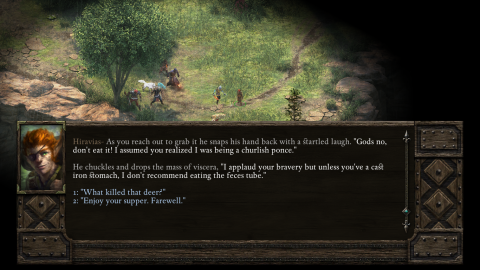 There’s also an issue with getting used to the original terms and vocabulary the game keeps throwing at you. It’s a bit overwhelming early on, so it’s important to ask questions when allowed and to try and look for context clues for the more complicated ideas and language. You do eventually find yourself comfortable, though, even if you can’t quite remember every term off the top of your head. Everything is based in a familiar concept you can mentally connect to, so if you can handle some rough early hours, reading through the magical lore becomes almost second nature.

It’s doubtful we’ll ever get an RPG quite like Pillars or the rest of Obsidian’s CRPG output ever again, with possible exception to the Wasteland games. There’s just so much content and polish in most every category, and all in an original setting and world they had to build from scratch. Just be warned that if you choose to go into the land of Drywood, pace yourself, or you will burst.