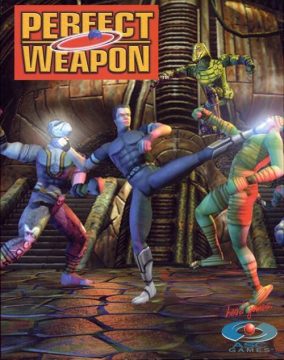 In this wretch PS1 title from Gray Matter Interactive, you are Captain Blake Hunter, apparently the eponymous Perfect Weapon, but if the introduction is any indication, you’re actually a pretty awful at living up to that title. One day, after a right old boxing match, you are sucker punched by some random guy and whisked away to an ice planet, leaving yourself to fight through bad guys, pick up spinning health icons, and fight through more bad guys. These bad guys include wolves, cat people and things which may be anthropomorphic ants. It’s not entirely clear. Fist fighting four-legged creatures, indeed, looks ridiculous. 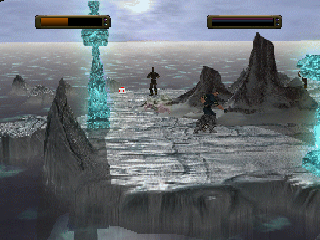 Beat-em-ups never needed much of a proper story, but then again, this isn’t a typical belt scroller – it’s actually set up like Alone in the Dark and Resident Evil, with static computer renders as backgrounds, polygonal characters, and the ever-dreaded tank controls. For a game entirely focused on melee combat, this is the worst concept imaginable. All of the four face buttons on the PS1 controller are used for various attacks, as well as the L1 and R1 button for ducking and jumping, so in theory there are a lot of moves. But nothing in this game works. Absolutely nothing. Most of the time in combat will be spent with your back facing the bad guys because you are too slow to turn around. The rest of the time you’ll be flailing wildly as you try, ever so desperately, for every one of your attacks to hit something. The camera is always so zoomed out so you can never actually see what you’re supposed to be hitting or avoiding, and it will, without fail, take an inadequate camera perspective and then make it worse. The fact that the player in the demo routinely gets the shit kicked out of him is telling.

You actually won’t even be spending most of your time fighting though. There’s also “exploration”, which means stumbling around incoherently, with a map that does everything possible to obfuscate where you’re supposed to be going. The controls here, too, are deadful. Your character will insist on taking two full steps everytime you press forward. Sometimes he’ll run when you hold down the X button – most of the time he’ll just ignore you. In fact, most of the time he’ll just stumble around and constantly mutter “No way!”, his insistent response that you’ve displeased him in some manner, because he’s gotten himself stuck in a tiny piece of scenery that you can’t actually see. There are times where you need to jump over obstacles, but given the terrible perspective, it’s never entirely clear where these are until your character does (or does not, if he feels like it) jump. And since you’re on an ice planet, your health is also constantly draining. There are constant health pick-ups you can use at any time, but they never seem enough to overcome this artificial barrier in a game where artificial barriers are at every button press. 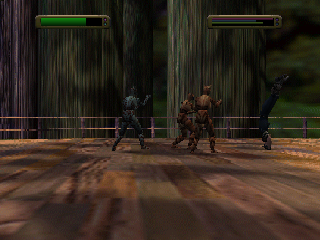 Also, pay attention to the loading screen bar. It saunters back and forth, like it’s pondering whether it should even bother sparing the electricity to deliver this game to the screen. If only, like the Dreamcast claimed, the PlayStation were thinking, because it probably wouldn’t approve of its CPU being wasted like this. For some reason it’s ended up on the PSN, should you wish to subject yourself to it.