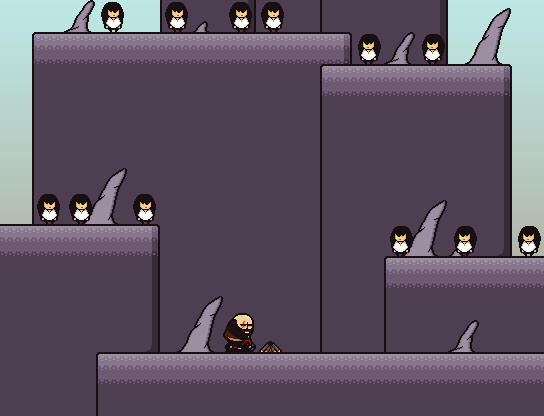 That perfecting feel didn’t happen until the crowdfunded Lisa The Painful (simply listed as Lisa on Steam). This game switches perspectives to Lisa’s brother, Brad Armstrong, an accomplished martial artist. We start with yet more grim, depressing, all to real moments as we see Brad beaten up on the playground while trying to protect his friends, only to come home and have a bottle thrown at his head. Marty orders him to go to his room, grumbling about the blood ruining Brad’s clothes, as the title comes up as Brad cries to himself. In a flash, we’re taken to the future, where most of mankind has seemingly been wiped out by an event known as the Flash, and only men remain. However, Brad manages to find a baby girl, just left on the desert floor, and decides to raise her as his own daughter and find some redemption for failing to protect Lisa. Years later, the girl (now named Buddy) is kidnapped, and Brad sets out to save her from the harsh outside world. 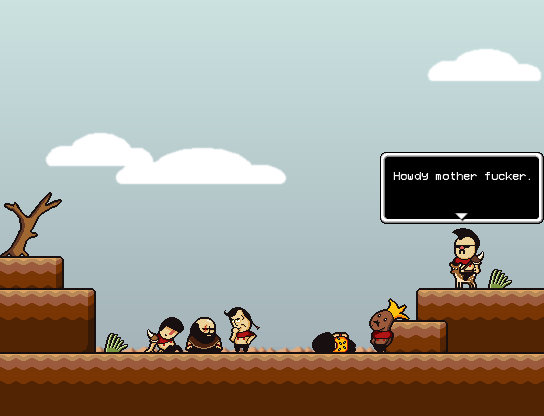 Painful takes more from the likes of Super Mario RPG and Earthbound, with a sense of humor that feels like a more refined version of Toby Fox’s Halloween Hack. The world of the wasteland is toxic masculinity shown in the most ridiculous way possible, with dirty magazines becoming the new dollar and guys regularly talking about how much they want to have sex with a woman, yet rarely having anything nice to say about their dead loved ones. Nern, one of the first possible companions, starts his stories fondly remembering his wife, but it’s not long before he refers to her as his “dumb potato bitch wife.” The entire world is one long satirical jab at heterosexual guy norms, and it’s insanely spot on. 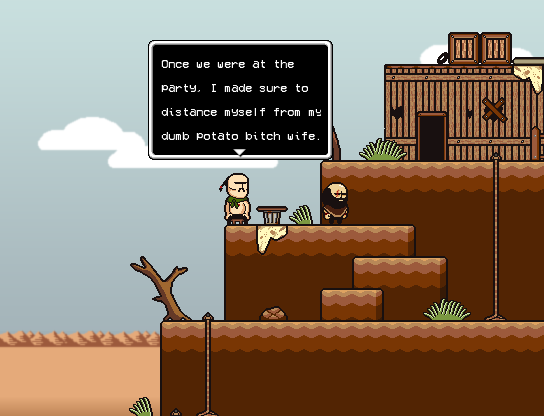 However, it’s also surprisingly relatable at points. Alongside jokes about feelings of inadequacy and self-loathing brought on by toxic norms, many characters have genuine struggles and tragedies. Companion Bo just wants to see his long lost brother, and you can take him to his mutated corpse to grieve, losing him in the process. There’s no gameplay benefit, but it’s clearly the right thing to do. Saving your friends can sometimes result in genuine shows of affection, and you find many outsiders in the wastelands who don’t fit in with everyone else in their world. Queen, for example, is a drag queen trying to run a brothel, but is fiercely committed to protecting their community. There are also plenty of people with their own values unrelated to their gender, like the cat lover Yazan wanting to help his favorite animal, and the straight laced Ajeet just trying to live a clean and proper life. This does feel like a world where real people live, helped by nearly every single enemy being a unique character. It just also happens to include a ton of silly stuff alongside, like the bulldozer driver who couldn’t save his wife because he was so bad at driving a bulldozer, who only gets in a fight with you solely because of how bad he is at driving that bulldozer. It’s a right funny game, even in the art design and music. Many of the tunes sound like grunts and farts, yet have an oppressive edge to them, perfectly capturing the contrast between the wasteland’s two major moods. Characters all have wildly different body types and looks, and not one doesn’t look amusing in someway (besides the surprisingly innocent Jack). It’s a cartoonish place that often crosses over into horrific, especially when you run into mutants, human being twisted into cutely vile forms that kill whatever is around them. Nothing about this place feels right, yet so much of it feels familiar and even inviting. It’s that constant contrast that makes the game really come to life. The combat itself is turn based with classic stats and moves, while working in some extra mechanics with characters like Brad, who can combo moves together and finish with a special move for extra damage. You also end up with roughly thirty possible party members, and all of them have their own unique qualities, like a wrestler who only has one attack that hits all enemies, to a drunk who’s main attack is drinking beer to get himself more drunk. You’ll also probably burn through them, especially if you play on pain mode, which limits the amount of saves you can make at a crow to one. Many major enemies in the game have perma-kill moves, and if a party member besides Brad is hit with it, they’re dead forever and are removed from your roster entirely. This is the sole reason you have so many companions, and there are plenty of moments that will make you dispose of them to continue. One of the most memorable moment involves the entire group being captured by a group of Russian roulette players, who force you to win a few games to get your freedom. There will most likely be a lot of corpses made in the process. The game constantly forces you to make tough decisions that could possibly change everything, and while save scumming can be done in normal, pain mode spaces save points so far across that these decisions suddenly become incredibly stressful. The game also brilliantly teaches you how to make the most of what you got in subtle ways, like first party member Terry having no offensive power, but an ability that makes an enemy cry or go berserk. He teaches you the importance of status effects and item use early, which is the only way to survive early on because of the near complete lack of grinding for most of the game. Scrapping by is a constant theme not only in choices and unexpected losses, but by complete vulnerability. If you lack a place to safely sleep and heal up, you have to risk a random event during a fire pit stay, which may even result with party members leaving or being kidnapped. The point of this game is less to be fair, but to be something to struggle through. Painful is an apt title, and the constant pressure placed on you perfectly mirrors Brad’s grim life. Brad is not only someone who’s survived an abusive childhood and holding onto a guilt complex that constantly has him make the worst choices possible, he’s also a drug addict who’s used both painkillers and a new drug called “joy” to numb himself. Brad’s entire existence is defined by pain and failure, and his chase to rescue Buddy is just as bad as most everything he’s suffered through. The theme of memories affecting us continues through this game with Brad’s ideas of right and wrong mainly stemming from his left over feelings towards Lisa and his buried hatred for his father and other abusers. This makes him sympathetic, but not necessarily a good person. Brad isn’t necessarily a villain, but he’s certainly not helping. Buddy is vital to the world’s continued existence, as many will remind you over the course of the game, but Brad is only interested in “protecting” her, robbing her of whatever life she may want. The journey of Painful is ultimately a meaningless one for the greater narrative. Brad has very little impact on the politics of the world for the majority of the game, and the only time these major players take notice of him is out of pity or spite for some unknown transgression long ago. Buzzo, the guy in charge of distributing joy, torments Brad in new ways every time he appears, hinting at some history Brad doesn’t remember. He’s the first major hint at who Brad really is, and also the first character to really push the idea of using joy. The joy mechanic is one of the game’s most defining features, a drug that gives the user a massive boost in power and resilience, along with a full health recovery, but users end up having withdrawal issues that hurt their stats at random periods of time, with Brad suffering from this condition regularly throughout the entire game, even if you don’t have him use joy at all. It’s a mechanic that puts you in Brad’s shoes, making you consider if this shortcut that helps for a little bit is really worth the drawbacks, or even if it solves the root problems. Once Joyful reveals where joy came from, it takes on a much, much darker meaning. By the time Painful ends, Brad will have committed some truly horrific, unforgivable acts, and the game will force the player to go through with nearly every single one of them. This is a game that makes you murder a man who has abused children in every way imaginable and make you feel horrible for doing it, accomplishing that feat with disturbing ease. This is a game that leaves a pit in your stomach, and it didn’t even need Brad’s semi-regular hallucinations to do it. The final moment is genuinely one of the most heartbreaking scenes ever put in any game, and it makes you feel sympathy for someone who has destroyed countless lives for selfish reasons. But those reasons are so tragic that it’s hard to find hate for them. It’s a soul crushing ending that doesn’t leave you with any easy answers to the problems brought up, but one with so much beauty and depth to it that it’s hard to believe it came from a game that lets you recruit a reverse-merman lawyer who fights with a sub-machine gun and constantly told the judge while you were on trial that you wanted to bang the judge’s wife.