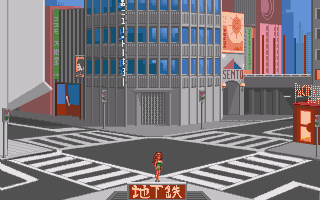 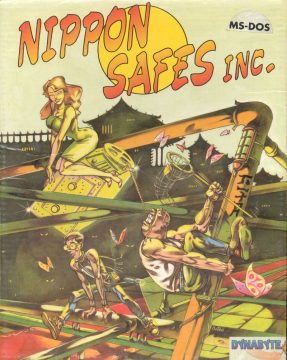 At the end of the 80s, an Italian software house named E-Motion signed a contract with British developer Mirrorsoft to publish their first Amiga game, a platform/shoot-’em-up hybrid named Crimetown Depths, that surfaced as a demo in 1989. It had a gritty cyberpunk setting rendered in an interesting graphic style, but unfortunately for them Mirrorsoft went down when the game was about 90% completed. A few years later several members of E-Motion founded a new company named Dynabyte, whose first job couldn’t be more different than Crimetown Depths: a humorous graphic adventure that followed the success of Sierra and Lucasfilm Games’ most famous productions. So Nippon Safes Inc.was born.

The game plays similarly to Lucasarts’ Day of the Tentacle, but actually predating it by two years, with three characters living parallel adventures that overlap a few times and get united at the very end. Dynabyte named this system “Parallaction”, which is also the name of the game’s engine.

The story is set in the fictional Japanese city of Tioko (halfway between Tokyo and Kyoto, according to the manual), where three small-time Caucasian crooks get in jail for different crimes: this part is actually a playable intro, a kind of tutorial with three very short scenes used to get familiar with the controls and with the comedy tone of the game. 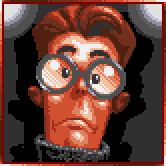 Tech nerd extraordinaire with a punny name, Doug turned to a life of crime after being expelled from college for tampering with his records. He’s apparently a safe-cracker, being an expert of both computer crime and explosives, but his plans are usually failures. His adventure in Tyoko may give him a boost from geek to criminal genius. 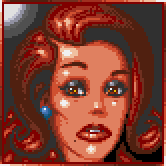 Ballet dancer turned sexy starlet, she has dreams of making it big in show business, but has to make a living as a stripper in shady locales since her “managers” ripped her off and took all of her money. She will stop at nothing to reach her goal of becoming rich and famous. Donna Fatale, her stage name, is also literally Italian for “femme fatale”. 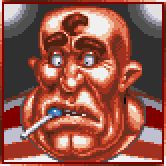 A former Italian boxer, strongman Dino is basically a good person, but all the blows he received during his career turned his brain into mush. He desperately needs another job and this makes him the perfect target for scams and other criminal activities. Fagioli means “beans” in Italian and when Dino eats them he pulls a Popeye, gaining super strength that is useful in various points of his adventure. 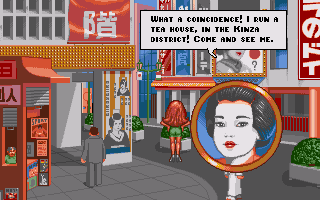 After the intro there’s the option of choosing the character you want to use, but the way to do so is overly complicated: you are presented with some kind of questionnaire/personality test, whose answers are linked to one of the three leads. Answering the test gives a string of Japanese ideograms to be later inputted as a code, which finally lets you to play as one of the three mains. The difficulty of the puzzles is in theory slightly different from one character to another, with the most clever one having the most difficult adventure, or at least this was the developers’ intention.

Every character starts right out of Tyoko Prison, after someone bailed them out. This someone is named Dr. Ki (the old man you control in Donna’s intro) and in exchange he needs their help to illegally recover three objects whose purpose, revealed at the end, gives sense to the slightly cryptic title of the game: these objects are needed to open a super-secure safe made by Nippon Safes. Doug needs to enter an order of monks to steal a valuable jade Buddha statuette from their monastery, Donna will apply for a job as the Emperor’s personal maid to find a precious katana in his mansion, and Dino… well, the poor sucker gets used by everyone until he becomes a human test subject in the lab he needs to steal a magnet from.

The interface is all mouse-driven – there is no status bar, and right-clicking anywhere on the screen brings up the symbols for the actions (open/look/take/talk, plus others depending on context) and the inventory. Dragging an object from the inventory over an object or person brings up the specific action it is needed in that case (i.e. rope and knife = cut the rope) without the need of cluttering the interface with too many icons. This drag-and-drop method is also used to combine elements you have in your inventory, but doing that is pretty awkward since to keep the inventory open you must keep the right button pressed. 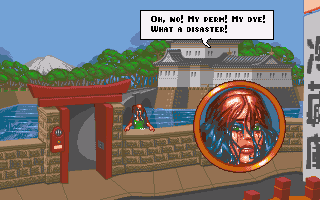 It’s also easy to get stuck because some puzzles are too dependent on pixel hunting, while others aren’t too logical even for the flimsy rules of adventure games. What’s worse, though, is that often the elements for their solutions are not always apparent, leading to incorrect choices. A big example is when you are needed a CD for karaoke – the solution is to go to the department stores and talk to the cashier to swap it for the one in our inventory. However, while every element in the store has a name and a humorous but mostly pointless description, the cashier does not, until you drag that one object over him, and one who doesn’t know that may mistake him for a simple background graphic and thus remain stuck.

Unfortunately it isn’t possible to switch from one character to another during a game, but that was probably for the best since the title demands an already excessive amount of disk swapping (it came in five floppy disks) if you don’t install it to hard disk. Also, the fact that the translations (in English, French and German) are questionable does not help matters: several sentences are translated literally from Italian, resulting into strange phrases. The devs, being a small novice team, probably could not afford a professional translator.

Reading the manual may give the impression that the game is somewhat of an examination of present-day Japan through Western perspective, but the “Mr. TZUTZUMI” credited in the intro as game designer reveals the true intent of the title. It really is a comedic game that plays with the most obvious cultural stereotypes such as karaoke, tea ceremonies, fast over-crowded trains, Yakuza, suicides and the idea that Japan’s industry would dominate the world economy. Every woman is dressed in a kimono and there are apparently sentient computers. 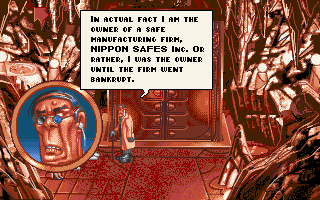 The developers’ knowledge of the country probably came from cursory reading of schoolbooks, newspaper articles and the occasional anime; this may account for the fact that the three leads remind a bit of the Doronbo Gang from the Yatterman series. And also for the leather-clad punks right out of Fist of the North Star walking among salarymen and geisha.

Still, the game is mostly remembered for its goofiness and zanyness rather than for historical accuracy. There are a lot of examples, from video game-related humor (two guys, who are actually the game’s creators, talk of making a game called “The Mystery of Ape Island”) to weird gags such as a Mr. Spock-look-a-like who is a gay concierge, and references that only could be understood by those familiar with the devs’ cultural background (for example, the Egyptian sarcophagi at the museum are actually caricatures of Italian politicians and TV celebrities). There’s also a fair share of ribald humor, especially in Donna’s mission, who has sex with a sumo – thankfully not shown on screen – to wear him down before a match and at one point uses a blow-up doll to withstand a fall. Also, the devs put themselves in the game as two creepy dudes hanging around the Hot Sushi strip bar… make of that what you will. There are even a couple of in-joke references to Crimetown Depths scattered here and there, such as the face of Jagoo (the player character’s employer) as an exhibit at the museum.

The humor, while not reaching the heights of Lucasfilm productions, is probably what made the game famous across Europe, with British and French magazines of the time giving it above average marks and recommending it, despite the various flaws, bugs and amateurish translations. That and the graphics, which were almost unanimously praised for being cartoony but at the same time detailed.

The artist gave them a comic book feeling, with word balloons, onomatopeias, odd perspective angles, and every time a new location appeared, it was in a black and white shot with captions reminiscent of a comic book page, that suddenly gained color, a very nice effect. After all, the game’s intro starts with a hand drawing the three leads on paper with a pencil and they suddenly becoming alive. The music however is nothing to write home about, and has absolutely nothing to do with Japan or Far East. An example is the rendition of the Peter Gunn Theme as Doug’s theme song. 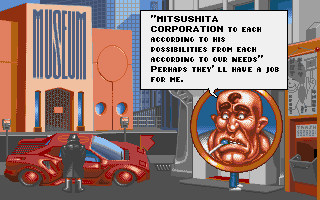 In the end Nippon Safes Inc. is an average adventure game with a great graphic style, an interesting premise and characters that slowly grow on the player, that needs to be remembered as an example of a period when an Italian game about Japan from a newborn team could aspire to be enjoyed by British and French players.

Links:
the MaX Gallery Press release of the game on the old site of the graphic artist.