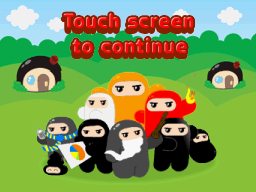 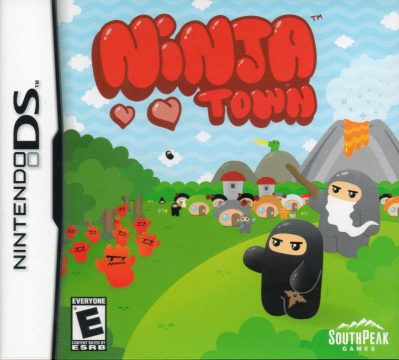 Remember Electronic Gaming Monthly? If Famitsu is THE gaming magazine of Japan, then EGM was its closest western equivalent. Their April fools jokes were so legendary that they even impacted the development of actual games (see Street Fighter The Movie The Game‘s Sheng Long), and their wide berth of talent have been hanging around the world of gaming journalism and other odd corners for a long time. Dan “Shoe” Hsu became the main face of gaming journalism’s more abrasive turn in the mid 2000s, Seanbaby has become a comedy writer mainstay on a variety of platforms, and countless accomplished critics have come through their doors at least once. And then there was former editor Shawn Smith, who left and started making cute ninja themed toys. 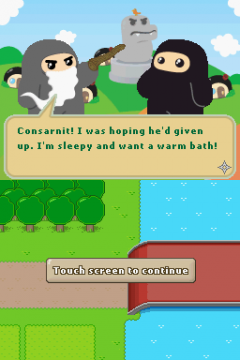 The Ninjatown line is still going today, complete with a COVID cloth mask decorated with little ninja buddies, there to protect you and those around you. There are a few simple mobile games out these days, but the most notable part of the Ninjatown legacy today is Ninjatown on the Nintendo DS from 2008. EGM even game Shawn a big shout out, announcing the game’s development to their large audience. A game where cute little ninja plushies fight cute little demon plushies is definitely hardcore Gamer stuff. Funny thing is the game kind of is, despite the cute looks. This is a proper capital G Game in every sense, and a real gem for the handheld.

It has an amusing story to it, where a bunch of demons are trying to steal a secret ninja cookie recipe, which is bad because cookies are the center of the ninja economy and demon made cookies would throw it into chaos. You play as a wee ol’ ninja master who has to guide his forces to protect key strategic points in a “path defense” sort of RTS. Enemies come in waves and can be picked off by ninjas you have on the path, stationed at various colored homes you can build with cookies earned from defeating enemies. You also have unique powers you can use to buff or debuff allies and foes, and even do tricks like blow enemies back. Goal is to survive and prevent demons from infiltrating your defenses, and you even get rated on your performance at the end. 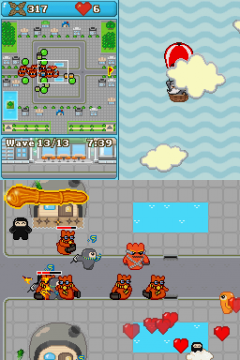 It’s a simple set-up the game helps you understand with fun, playful instructions littered with cutesy jokes, opening up more units, buildings, mechanics, and enemy types as you go along. It never throws too much at you early on, letting you get used to the basics. The various functions of each new unit and building is also easy to understand, like sniper ninjas (who use little slingshots) acting as stationary defense turrets, and anti-ninjas being the slower powerhouse counterpoints to their wee ninja troopers. There’s a lot of variety here, even in the wide mix of enemy types, and every design decision is clearly thought out and fully considered in what they add and change to the formula.

This allows the game to be a challenging experience, but an overall fair one. It’s all about picking the best unit placements and balancing upgrading units with your cookie pool growth, paying attention to the above wave bar to see what sort of enemy wave is coming next. A regular demon wave is one thing, but others require specific types of units. For example, you need some anti-ninjas around for when the big boys come around, unable to be damaged by anything but anti-ninjas or any other ninja type with high enough leveling. The speedy tie wearing bird demons can be sniped down, but can be further slowed and beat by the speedy business ninjas. The forth set of levels introduces zombies that can zombify your melee focused ninjas. It goes on and on, and all these elements together are what make the game a fun challenge. 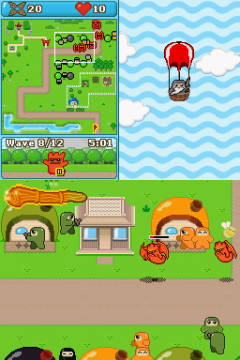 You could say this is a great starter game to get into RTS games, but there is the issue of the difficulty spikes. Each of the ten chapters has four maps, each with a unique challenge to them. The thing is you are not given all the surprises at start, so you need to play carefully with sound starting strategies to have wiggle room for later, which as you can imagine can be frustrating for newbies. While making enemy entrance choke point mobs works fine for a few early maps, they start coming from more angles and require more careful layouts to deal with as you go. Enemy waves also grow in level over time, so you need to keep upgrading units as well as place new ones, or make use of buildings that modify nearby unit stats.

The end result is a simple game from a distance, but once you start playing, the actual depth and complexity of the many mechanics starts to come into full. It can be intimidating, but the game does give you an extra tool to make things more manageable. You can earn random tokens from a lottery at the end of a completed map, and tokens can be placed during missions with a variety of effects. For example, your consultant ninja can make your nearby ninjas act and move quicker, or you can slow down enemies in the area with a cute baby ninja. The catch is that unlocking new tokens requires high rankings on completed maps, encouraging replay to find new powers to make use of for more challenging maps, using knowledge of previous tries to plan things out more efficiently. 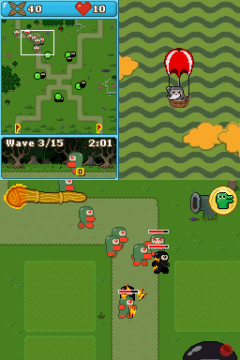 Where the game came from and its overall quality makes it an interesting title for the DS. It’s sort of like Carmack’s Orcs & Elves in terms of design goals, but with significantly more personality, not just giving instructions some flavor in basic but engaging play. It’s not really amazing, but Ninjatown has so much charm and such tight design that it’s hard to forget it after playing it. You wouldn’t think one of the best made strategy games on the DS would be based on cutesy ninja toys, but that’s the case, and it’s a fun little game worth trying if you haven’t before. It almost won a BAFTA, it is absolutely not something to pass up.