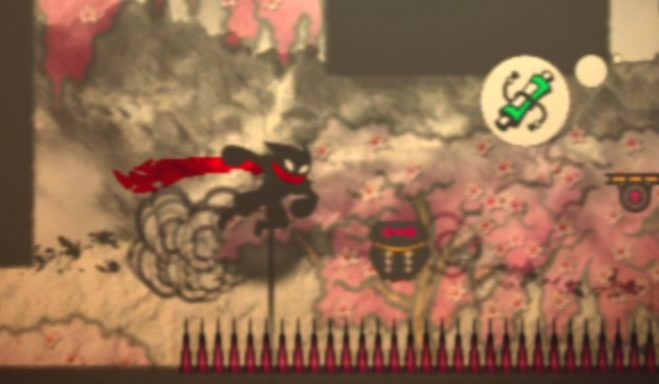 Japanese developer Cave has been known for their long running line of distinct shooters, but they occasionally branch out into other territories. Nin²-Jump is their attempt at a classic arcade-style platformer, released for the XBLA in 2011. It takes on the form of a shadow puppet play – the action takes place on the stage, with the silhouettes of little children on the bottom of the screen, and all of the characters are represented as black cutouts. Your player character, the appropriately named NIN-JA, doesn’t run so much as bounce, with the sticks that control him plainly visible. The backgrounds have a soft color of a classical Japanese painting. Whenever NIN-JA is killed, he falls apart, and blood spews everywhere, one of the only effects that’s plainly inauthentic, but self-knowingly hilarious nonetheless. 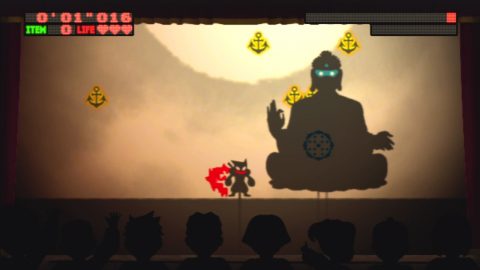 There are two modes: Adventure Mode and Score Attack. Adventure Mode has 50 compact levels in total, with ten each fashioned around each of the four seasons, and the final taking place in a castle. The goal is each level is simply to collect all of the green scrolls and make your way to the exit, while dodging the many buzzsaws, spikes and enemies. In the second season, you’re granted a kusari (chain), which allows you to grapple on to walls and ceilings to pull yourself across greater distance. In the third season, you obtain the ability the power-up – by grabbing scrolling and activating the power mode, you’re largely invincible to enemy attack and can instead kill them rather than being harmed. By the fourth one, you slowly regain power on your own, allowing you to destroy enemies without needing scrolls (though they still need to be obtained to beat the level.) 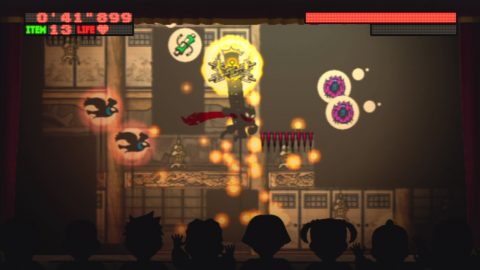 It’s all rather fun, though it takes a bit of getting used to. The controls aren’t as tight as one would expect, and it’s a little odd controlling a character that doesn’t run so much as bounce furiously. The kusari doesn’t quite work the way you’d initially expect – it propels you in the air after each grapple, so you can use it to climb walls vertically, and there are occasions where you need to propel yourself upwards by tossing it downwards. But after a bit of time, it becomes more fun to grapple all over the place instead of merely jumping, sort of like how gratifying pogo-bouncing in the NES DuckTales. 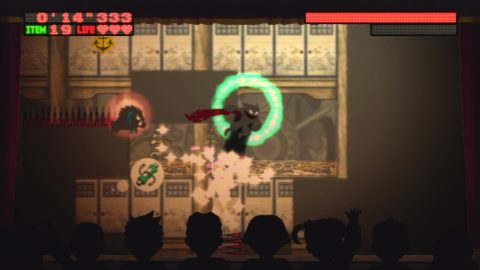 But even though it’s got the fundamentals down, there aren’t any levels where you really need to master any of these skills, and thus really easy. Conceptually it’s not too dissimilar to games like N+ or Super Meat Boy, which also had fairly short levels consisting largely of platforming challenges. The difference is that they’re both ridiculously difficult, requiring precise mastery of its controls in order to succeed. Meanwhile, Nin²-Jump is pleasant and enjoyable, but largely fluff. You can take three hits before getting killed, which is too forgiving, and almost promotes sloppy play at parts. There is some incentive to replay levels to improve your times, and to collect the “Cave” icons spread throughout each stage (which are not at all hidden and rarely difficult to get), but ultimately it’s not all that gratifying. 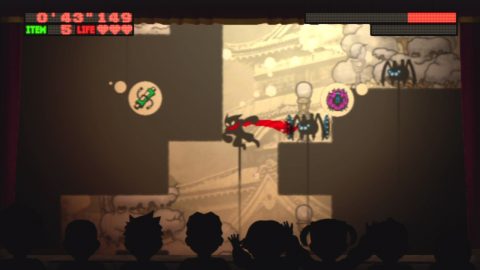 But that’s okay, because Adventure Mode is secretly just a series of training grounds for the crux of Nin²-Jump – the Score Attack. There are only five stages in this mode – one for each of the main areas – but rather than simply collecting scrolls and reaching the exit, the goal is to survive for as long as possible, while destroying enemies and racking up as many points as possible. For the most part, it works the same way as Adventure Mode – your power bar slowly fills up, but is more quickly replenished by grabbing scrolls, allowing to kill stuff. The biggest difference is that destroyed enemies now yield points, and destroying multiple enemies in succession will begin a combo counter, which in turn modifies the points granted in each kill. Breaking a combo doesn’t immediately reset the counter, and instead begins counting down slowly until you begin it again. There is also another counter below the power meter, which increases as you kill enemies regardless of combos. When this reaches 1000, you can activate a special fever mode where all destroyed enemies will give an exponentially larger point value. You can still take three hits before you die, although getting hit not only resets the combo counter completely, but also drains a bit of the fever meter bar. The scrolls only regenerate when you’ve collected all of them in the stage, so if you miss one, it’s quite a tough fight to get back to it without taking damage. The key to success in this mode is not complicated – (1) find a pattern to collect the scrolls and stick with it, (2) rack up combos, and kill as many enemies are possible in fever mode, and (3) don’t get hit. The longer you stay alive, the more enemies that flood in, until eventually you get overwhelmed and the game ends. 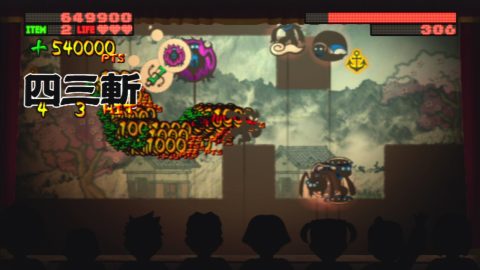 There’s an interesting power dynamic at work here, greatly different from the typical action-platformer. In most of these games, the player is at a disadvantage, because they are always vulnerable in some way. In Nin²-Jump, assuming you’re playing well, you’re invincible roughly 90% of the time – it’s just what you do in that other 10% when you’re vulnerable that matters. It’s here where you’re forced you to make use of the many nuances that can largely be ignored in Adventure Mode. For example, you can use the kusari to grab onto enemies to move around quicker, although certain enemies have shields that repel the attack. The biggest threat are the “Death” monsters, which only appear in the Adventure Mode levels if you take too long. There are invincible and will always damage you, no matter whether you have the fever mode activated, so avoiding them is obviously a major priority. However, there’s a certain trick to play with the power modes – every time you deactivate it, either if you run out or turn it off manually, it propels all enemies away a short distance. In addition to preventing cheap deaths, it lets you get some breathing room and push back Death, if even shortly, to find your way out of sticky situations. Time also slows down when you’re in danger, similar to the underrated XBLIG game Weapon of Choice, which not only helps you squeeze out of such tight scrapes but also heightens the drama considerably. 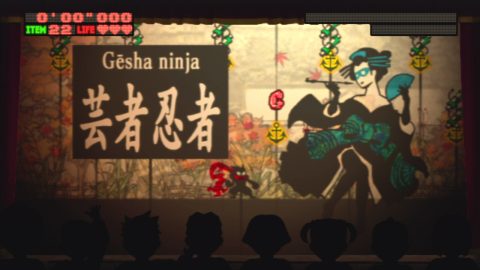 In a sense, Nin²-Jump has far more in common with early 80s arcade games, the kind that repeat over and over and over again, until you either die or glitch them out. “Winning” in practically impossible, so there’s a greater emphasis placed on score over progression. Furthermore, Score Attack runs are quick and dirty, and the scoring mechanics are easy to understand, making them more approachable than the average Cave shooter. However, Cave games especially excel because they are fantastic at giving visual feedback when you’re doing well. Here, whenever you kill an enemy, they explode into a mess of rice balls and sushi, and are automatically collected by the player. As the combo grows, the amount of food increases, and as you continue to string along the combos, hundreds upon hundreds are flooding the screen, to the point where it overloads the 360 and slows down the action to a crawl. It’s the same kind of rush when you flood the screen with missiles in Bangai-O, and plenty demoralizing when you inevitably take a hit and lose your ability to effortlessly cause such destruction. 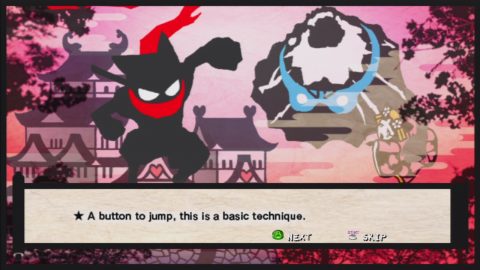 Beyond the mechanics, the presentation is generally fantastic, though not without issues. The low-res visuals, upscaled and filtered to hell, are unfortunately on the blurry side. It might be much to expect super high quality graphics out of a $5 game, but it’s not like any of the visuals are extraordinarily detailed anyway. Still, it’s more than made up for with its hyperkinetic energy. The soundtrack, provided by Ryu Umemoto, is a fusion of classic high octane FM synthesis and sampled Japanese instruments, very similar to his work on Akai Katana. The Score Attack levels even contain arranged versions of each season’s theme songs, accompanied by a rocking guitar. 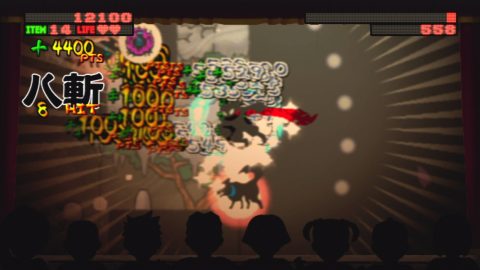 There’s a whole lot about the story that’s flat out goofy. NIN-JA is a regular old ninja, who is commanded by his master Nakamura to seek out a bunch of sacred scrolls. He’s too enamored with staring at the beautiful Princess Sakura (a typical name, if there ever was one), so Nakamura kidnaps her in order to get NIN-JA off his butt. There are text scrolls after each boss battle, which are cheeky and overdramatic. The bosses are incredibly silly – the kendo ninja is weird, the geisha ninja and the sumo ninja are even more bizarre, the Mt. Fuji with legs is a sight to behold, and the Giant Buddha Ninja is absurd as all get out. Conceptually some of the parody be lost in translation, but the haphazard translation does a great job of indicating how tongue-in-cheek the whole thing is. 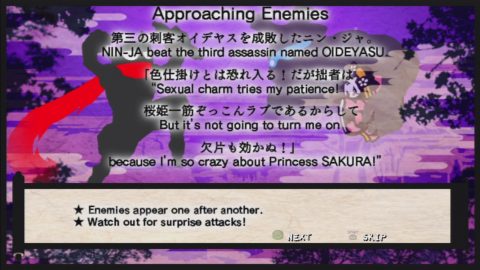 It’s a very, very Japanese game at its core – all of the text is displayed in large kanji, screamed out in japanese by an invisible announcer, with little English letters translating what they mean. However, the cries of the audience were left in Japanese, which was probably not for the best. Granted, hearing such cries of elation in English usually sounds bad, if years and years of awkwardly dubbed fighting game and RPG attack cries are anything to go by, but you really miss out on a lot if you don’t understand what they’re saying. It’s more than just random gibberish, and actually react slightly to what’s going on the game. (“Sasuga, Ninja!” – “Great job as always, ninja!”, “Abunai!” – “Watch out!” “Sugee na!” – “How cool!”, “Ninja no pinchi!” – “Ninja’s in trouble!”, “Makeru na!” – “Don’t lose!”, and so forth.) It’s flat out adorable, as these fictional little kids seem to be legitimately enamored with the actions of your just-as-fictional ninja, as if whatever fantastic action they were watching, what you’re controlling, was 100% real. They can be turned off if they prove to be bothersome, but they really do add to the game hugely. 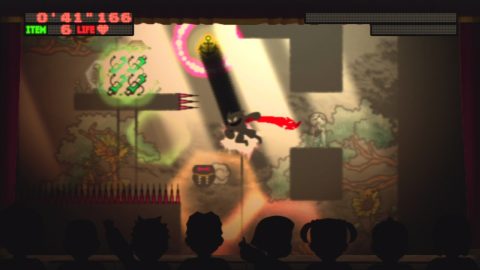 There’s no doubt that Nin²-Jump never quite meets its potential. It promises downloadable content on the title screen, which could’ve served to flesh out Adventure Mode, but none have been released. When it was initially published, Cave promised to give proceeds for the 2011 Touhoku earthquake, though even that was seemingly not enough to spur on sales to prove this game a success. Nonetheless, anyone who enjoys the scoring mechanics of Cave games – and even those who find them overwhelmingly difficult and complicated – can find a lot to enjoy with the Score Attack, making it more than a justified purchase.