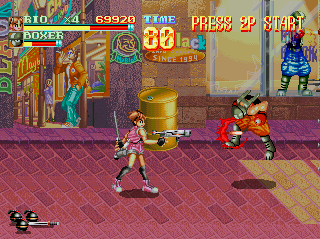 When most people think of Technosoft, it’s usually for their technically impressive Thunder Force games or the groundbreaking Herzog Zwei. However, while they had largely made side-scrolling shooters with the odd off-shoot, they started developing games in other genres around the dawn of the sixth generation. Quite literally, as they released a beat-em-up for the PlayStation’s Japanese launch called Nekketsu Oyako (not to be confused with the Kunio-kun series despite prominently featuring “Nekketsu” in the title). Though largely forgotten, it’s nevertheless an enjoyable time with some especially interesting combat mechanics.

The name “Nekketsu Oyako” translates to something along the lines of “Hot-Blooded Family”, which perfectly describes the Hibino family. When scientist Saeko Hibino is kidnapped by the dastardly Haraguro organization to build a doomsday device, her pro-wrestling husband Rando, their fighting prodigy daughter Rio, and Saeko’s assistant Toratarou “Tora” Minoru set out to fight their way through and rescue her. 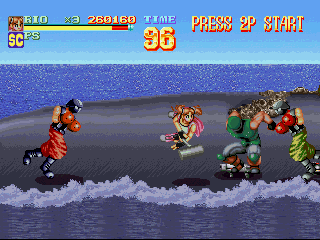 Nekketsu Oyako is a fairly typical beat-em-up of the era, having you travel along linear levels and fighting all manner of enemies on your way to the boss at the end. There’s your usual assortment of regenerative items and melee/ranged weapons to use on enemies, though a nice touch is that what you can use depends on the character you’re playing as. As an adult, only Rando can drink beer and use the bazooka, but Rio and Tora have no problem using every other firearm left behind.

Where things get interesting is in the surprising amount of moves each character has. Standard combos, moves that require fighting game-styled inputs to pull off, two grab attacks, a pair of aerial attacks depending on what direction you press, a dash attack, and a special screen-clearing attack that reduces your health: it offers up a wealth of options for taking on enemies, and each character has their own unique movesets. While Rando’s the slowest character, he can pull off some deadly suplexes and powerslams among other crowd-clearing moves. Rio is perhaps the weakest of the three, but quite versatile with her special hammer. Tora sits in the middle, with a comparatively limited moveset that can still deal some damage. 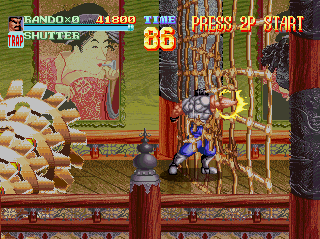 Some of these moves can be exploited if you know what you’re doing, but it means that the many combat encounters never get truly boring since there’s so many moves to experiment with. The design of said encounters also plays a big role in this, with new enemy types being introduced in every level, and each encounter throwing different combinations of foes at you (which also vary between the four difficulty settings).

That said, some enemies become rather tedious after a while. Whether it’s the roller-blading kids who keep moving around, the black-mask boxers with enormous health bars, or the “Freddy” cyborgs and their far-reaching claws, certain combat encounters can’t help but drag. Thankfully, this is mitigated by some well paced levels. Locales change frequently enough, with new obstacles or gimmicks to keep things interesting, and most sections never overstay their welcome.

However, while there’s plenty of things it does well, Nekketsu Oyako doesn’t really stand out otherwise. Part of it has to do with the unremarkable presentation. The sound effects fit what’s going on and the soundtrack (whose composer is currently unknown since the game doesn’t seem to credit its staff) is appropriately fast-paced and catchy, but they don’t intensify the action or the excitement as much as they want to. 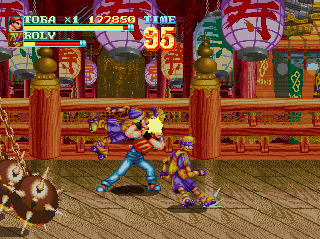 The graphics also add to this. In its defense, the framerate is consistent, the color schemes are varied and somewhat pleasing, special attacks are accompanied by cool effects, and every level offers at least two sections with unique settings and artwork. Certain sections are particularly memorable for how odd they are, such as a stage where you’re fighting your way through the belly of a whale, or a section where you’re on a blazing fast rollercoaster fending off dozens of foes. But the actual character animation features weak timing and frames, resulting in attacks or moments that don’t look satisfying to watch.

In comparison to other beat-em-ups of the day, Nekketsu Oyako doesn’t stand out stylistically or in more obvious ways despite being on 32-bit hardware. There’s nothing wrong with that, mind you, but it might explain why the game has largely been forgotten. The lack of an official localization certainly didn’t help, although it can easily be played without knowing Japanese. If you have trouble navigating the menu or want to better understand the cutscenes that bookend things, an English fan translation by PentarouZero and Al LaPrade is available. 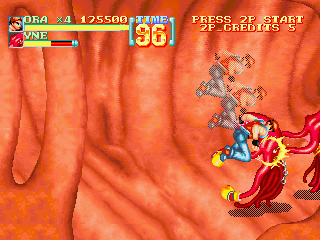 A few months later, the game was ported to the Sega Saturn, with a handful of changes to the mechanics and presentation. The soundtrack has been rearranged with slightly different instrumentation, with some tracks being played in a different key, and a couple of new pieces have been introduced. A few enemy palettes and backgrounds have been modified, some of the animation frames were added or redone, and certain effects have been tweaked to account for the Saturn’s difficulty with transparency.

A minor but meaningful touch is that grabbing food items when your health is full no longer gives you extra health, making things a bit tougher than on the PlayStation. The engine’s been given a few tweaks that impact the combat: enemies are easier to juggle, moves can be cancelled out of, and the characters have been given a few more moves that require special inputs. Because these all culminate in making the combat even more versatile, the Saturn version is the one worth checking out.

As an aside, the opening to the PlayStation version will occasionally feature a card advertising the 1995 pinball game Kyuutenkai: Fantastic Pinball.

This list of special moves was written by Shumps forum user Kino in this thread discussing the Saturn port: https://shmups.system11.org/viewtopic.php?f=3&t=50968

The English fan translation patch, edited by SCO to be workable with mednafen and redump: https://www.romhacking.net/translations/4794/

Crows: The Battle Action for SegaSaturn