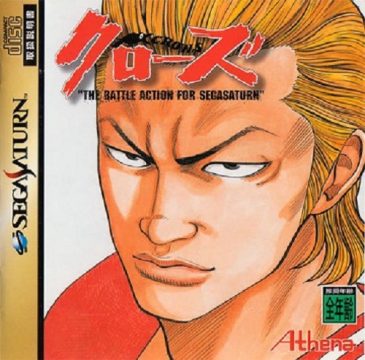 While not very well-known in North America, the “delinquent” manga genre goes back to the 1960s at least, spawning a number of successful titles throughout its history. Focusing on hot-blooded Japanese youth who fight to rule their school, run with bosozoku biker bangs, or simply try to get through their teenage years without conforming to mainstream society, they typically mix action, comedy and delinquent politics to varying degrees.

Among the major names in the genre is Hiroshi Takahashi, who came to prominence early in his career with Crows. Starting publication in 1990, Crows follows Bouya Harumichi from his transfer to the infamous all-delinquent Suzuran High School to his graduation. Uninterested in fighting for power or upholding a though guy reputation, he would rather skip school to sleep until the afternoon and sponge fast food and bento off whoever he can, but his violent environment won’t leave him be. He gets into numerous battles over the years as he makes friends and enemies at Suzuran and around town. A popular manga, Crows spawned 28 volumes, a sequel of roughly the same length (Worst), countless side-stories, 2 OVAs and a trio of live action movie prequels, among them the beloved Takashi Miike-directed Crows Zero & Crows Zero II, which in turn gave birth to their own manga retellings. Perhaps due to the not-quite-kid-friendly subject matter, it never saw a TV anime adaptation, and only one video game, 1997’s Japan-exclusive Crows: The Battle Action for SegaSaturn. 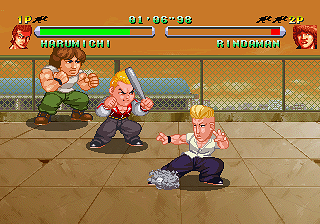 Published by obscure developer Athena Co. (Dezaemon), it appears at first glance heavily inspired by Technos’ own hot-blooded Kunio/Nekketsu beat-’em-ups, going for River City Ransom‘s fighting style and super-deformed looks in particular. As it turns out, it’s no coincidence; a look at the credits reveals that quite a few former Technos employees worked on it, including executive producer Teruo Ishikawa, who was the project leader for Voltage Fighter Gowcaizer, the composers, and about half the graphics team. Most notably, the person in charge of the visuals was Kouji Ogata, who’d worked as a character designer on most of the original Double Dragon series, Combatribes, Super Dodge Ball (both of them) and many others. Considering that none of them are credited on subsequent Athena releases and that Gowcaizer was Technos’ final release before their bankruptcy in 1996, this suggests the possibility that Crows may have started out as a Technos project.

Unlike River City Ransom, however, its structure is linear, dividing the game into numerous short levels where you fight various types of hoodlums, cops and drunken salary men. Some areas also feature young couples sitting on benches or cleaning crews – they will mind their business as long as they’re left alone, but hitting them will attract more cops or stir them into fighting back. Though it appears to be shown from a side-view, the stages are actually skewed at an angle, so heading North or South has the characters walking diagonally, which takes some getting used to. 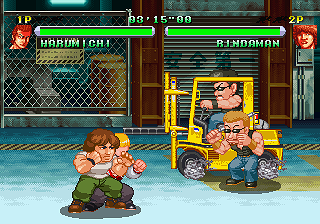 Visually the game is a mixed bag. The sprites are colorful, expressive, and well-animated (though the giant heads might not be for everyone), but the backgrounds are more drab in tone, resulting in a slightly off-putting contrast. They also tend to repeat and come off as a little plain considering what the Saturn can do. Art from the manga is displayed in between levels, but the pixelated reproductions don’t always do it justice. Considering the source material, animated cutscenes would have been nice, but maybe they didn’t have the budget. The soundtrack mostly consists of standard rock-oriented stuff. It supports the action well enough but only the intro theme really stands out, with its pounding, oddly creepy percussions and strong melodic line.

While there is no story in-game aside from a text intro and a brief recorded speech before the credits roll, the levels and bosses are based on five story arcs from the manga, starting with the confrontation with the Front of the Armament bosozoku gang and ending with the struggle for the top among the new generation of Suzuran freshmen. There are two characters available initially, Bouya and his early rival Rindaman, a quiet loner of legendary strength. As you advance in the game you will unlock two more characters, whom you must first defeat: Ryuushin, the Front of Armament’s vice-president when you first encounter him, and Tatsuya Bitoh, the middle brother of the Housen Academy banchou dynasty. They do not join right after you beat them, but at later points in the story corresponding to their becoming allies in the manga. Crows fans will be disappointed that many of the most likeable among the series’ massive cast of character are nowhere to be found – no Bulldog, Ebizuka trio, Maruken and Kakuken… On the other hand, the final battle pits you against none other than Zetton on the school’s rooftop, a scene from the manga which coincidentally evokes River City Ransom‘s ending as well. Some minor antagonists appear exclusively in two-player mode, as sub-bosses immediately preceding the main boss fights. 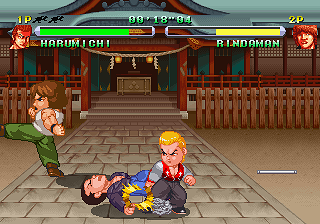 Punches and kicks are assigned to seperate buttons, however regular attacks don’t chain into combos as is normally the case but rather push the enemy back. This is probably the game’s greatest flaw, as it makes fighting more trouble than it should be. As such, the main characteristic that distinguishes the four characters is the different ways in which they can knock enemies to the ground. It takes three regular attacks to do so, but some moves hit more than once or hard enough to do it instantly. For example, Bouya’s jump kick and running attack hit twice if they land properly, so following either with a punch or kick will do the trick. Meanwhile, the other three’s running attacks will knock opponents off their feet instantly, but their jumping attacks only count for one hit. As you begin to face bosses and stronger opponents you will find that throws are often the only reliable option.

Otherwise Bouya and Ryuushin are faster than Rindaman and Bitoh, and Bouya can also kick enemies when they’re down, a satisfying way of finishing them off. The defensive aspect of battle is unusually developed, relying on two options: there’s a block button, but it’s difficult to put into practice because there’s a slight delay before it activates and it be can’t held for long. Its main use is to bait bosses into an attack, leaving them vulnerable to a counter. Much more useful is the evade button, which results in a rapid dash backwards or forwards depending on the character, allowing you avoid being surrounded by groups of thugs and dodge attacks. The other relatively original twist is the ability to customize combos from a handful of special moves and assign them to the L and R buttons. Using them costs health and leaves you vulnerable to attacks from behind, however, so the whole thing is a bit of a waste. 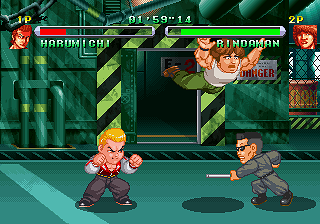 On top of the usual health restoration items, some of which are cleverly hidden behind statues and other objects, you will come across cans of beverage, probably iced coffee, that provide a speed boost for the remainder of the level. They are usually obtained by smashing vending machines to pieces, and they give you a notable edge over your adversaries. You’ll need it, because the game gets difficult in the later stages. Some of the later enemy types are difficult to approach, charging at you aggressively from all directions and countering jump kicks with grappling moves. Dealing with them requires caution and patience. If it proves too much, there is always the option of setting the difficulty to Easy.

Speaking of patience, therein lies the game’s greatest fault: its pacing. In the beginning the stages go by very quickly, but there are too many of them before you get to a boss and the loading screen that pops up between each breaks the flow of the action. The wait isn’t very long, but it’s a bit jarring that it’s there in the first place, considering the 2D graphics don’t exactly push the Saturn hardware to its limit. As you advance the levels get longer and the game starts to drag quite a bit. Stronger hits leave you unconscious, requiring that you mash buttons to get your senses back. This happens a lot later on and quickly becomes annoying. It would have helped to have the option to save, because it’s rather long for a single session. Playing with a friend alleviates most of these problems, as you face the same number of enemies, resulting in a faster and less frustrating experience. For a single player, there is still a bit of fun to be had, especially in the early levels, and it remains an interesting curiosity for fans of Crows or Technos beat-em-ups.