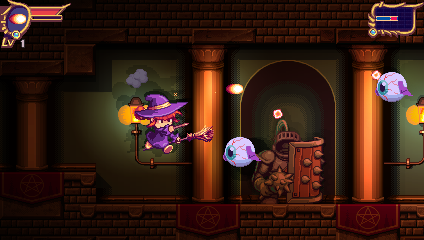 Andrew Bado, head of Last Dimension, has a long history working with sprite games, having collaborated with WayForward (creators of Shantae) and Gameloft. His latest release, the fantasy themed Mystik Belle, patterns itself after old adventure game hybrids such as Slightly Magic, and the long-running Dizzy series from Europe. It’s a very strange title that doesn’t really seem to fit into a simple category in today’s market, not even in the diverse and experimental indie sectors. The best way it can be described to modern sensibilities is as a Metroidvania formula plastered onto a point-and-click adventure game, as progressing through the game is more about using the right items at the right points than skillfully fighting your way through.

The script, on the other hand, is very modern. The game has witch in training, Belle MacFae, make the Walpurgisnacht Brew, an important part of a yearly ritual at her school. However, she’s only doing it because she’s been framed by some unknown person who destroyed the original batch, and the witches’ council has already decided she must be guilty (insert court system joke here). Belle is frustrated with her task and makes sure everyone knows it, giving all sorts of sarcastic remarks and throwing shade on the old fashioned idiocy of her magic school. When it works, it elicits a chuckle. The style begins to get a bit obnoxious at some points, however. The true ending (assuming you find all eight lore pieces) is easily the highlight of the experience. The final boss might be a joke, but the entire concept of that fight is instantly amazing. 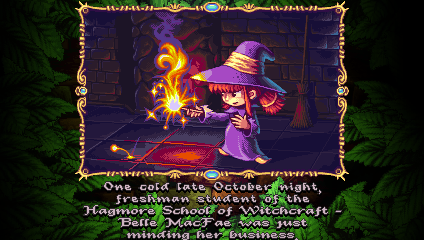 Mystik Belle has you wandering around the massive school to find and collect whatever you can that isn’t nailed down, simply because it might prove to be important later. By figuring out puzzles, you can open new paths, explore new areas, fight new monsters, and collect the three necessary ingredients for the brew. The developer outright states this isn’t supposed to be a Metroidvania, but rather an adventure game, and it shows. The design fits much more with the latter genre, with lots of big, colorful sprites, as well as item puzzles, and esoteric logic stretches. Some of the puzzles here are too old school for their own good, though, made even more frustrating by the other half of the design process.

Point-and-click adventure games can get away with a lot of their more confusing puzzles because they have a very simple interface to work with. Even older titles in the genre, with their multitude of interaction options, eventually have a single solution for you to work with that you just have to deduce via trial and error. That’s true here, but now there’s also a greater focus on back tracking. The exploration elements are lacking a lot of polish, with a limited amount of mirror rooms to teleport around with. You have a limited inventory, though thankfully warp chests, added in later revisions, make juggling all of the items much easier. If you don’t have a guide with you, the constant back and forth can become tedious, especially due to how spread out the map is. Thankfully, since the game’s release, there was an option added to speed up the whole game and other changes have been made so Belle is smoother to control. 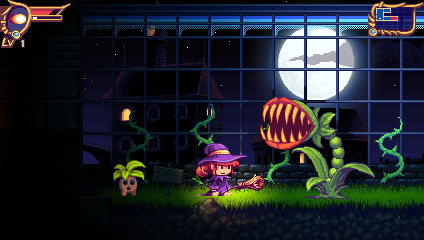 The added experience system also feels pointless. By killing monsters, you can go up levels and gain a new basic projectile. That’s nice and all, but max level can be reached fairly quickly, and then killing monsters has no further reward besides getting an obstacle out of your way, assuming you can’t just easily dodge it (which you normally can). All of your abilities come from killing bosses, too, so there’s little point in focusing heavily on leveling up, especially when every single boss is much easier to beat with the lightning spell you earn in the Frankenstein fight early on. Bosses are pretty simple to boot, with limited and familiar patterns among all of them, not to mention almost unavoidable bullet spamming that’s only counteracted by having a large life bar from leveling up. Combat can be rewarding in small bursts, but it’s easy to see where the seams are sticking out. In the end, the game doesn’t quite come together as it should, leaving the sensation that two different games are crammed together and trying to get your attention, tripping each other in the process.

That’s not to say Mystik Belle is a bad time, mind you. The rooms all have their own sets of monsters to get through, and that’s where things work best. It quickly becomes about navigating and examining enemy and platform patterns, which is enjoyable and rewarding, making experience grinds much less annoying to deal with. The game’s sense of humor and goofy designs also keep things fun, especially in a hidden area where you can gain a healing spell. It doesn’t wear out its welcome, either with a play time of about seven hours or so if you’re not using a guide. 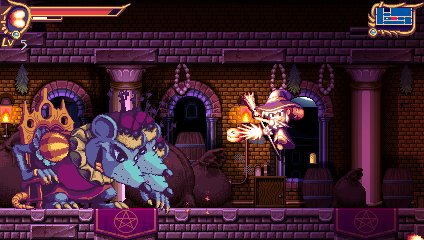 The game is gorgeous, too, serving as a really impressive work of sprite graphics. Every character and monster is huge and finely detailed, from their slightest movements to their clothing and features. The backgrounds feel full of life, especially in populated areas, and the whole game has an incredible atmosphere. There are even lighting and shadow details mixed in – Bado really shows off his skills here, making some truly incredibly sprites. The music is more forgettable, but always fits the mood the game is aiming for.   Ultimately, the presentation  saves Mystik Belle, as its sheer beauty alone distracts from its other issues through most of the game’s play time.

After its initial Windows release, Wayforward picked up the game for porting to PlayStation 4 and Xbox One. Small changes were made to the dialogue to make it appropriate for an E10 rating, as well as replacing the pentagrams with “H” symbols (for “Hagmore” school).