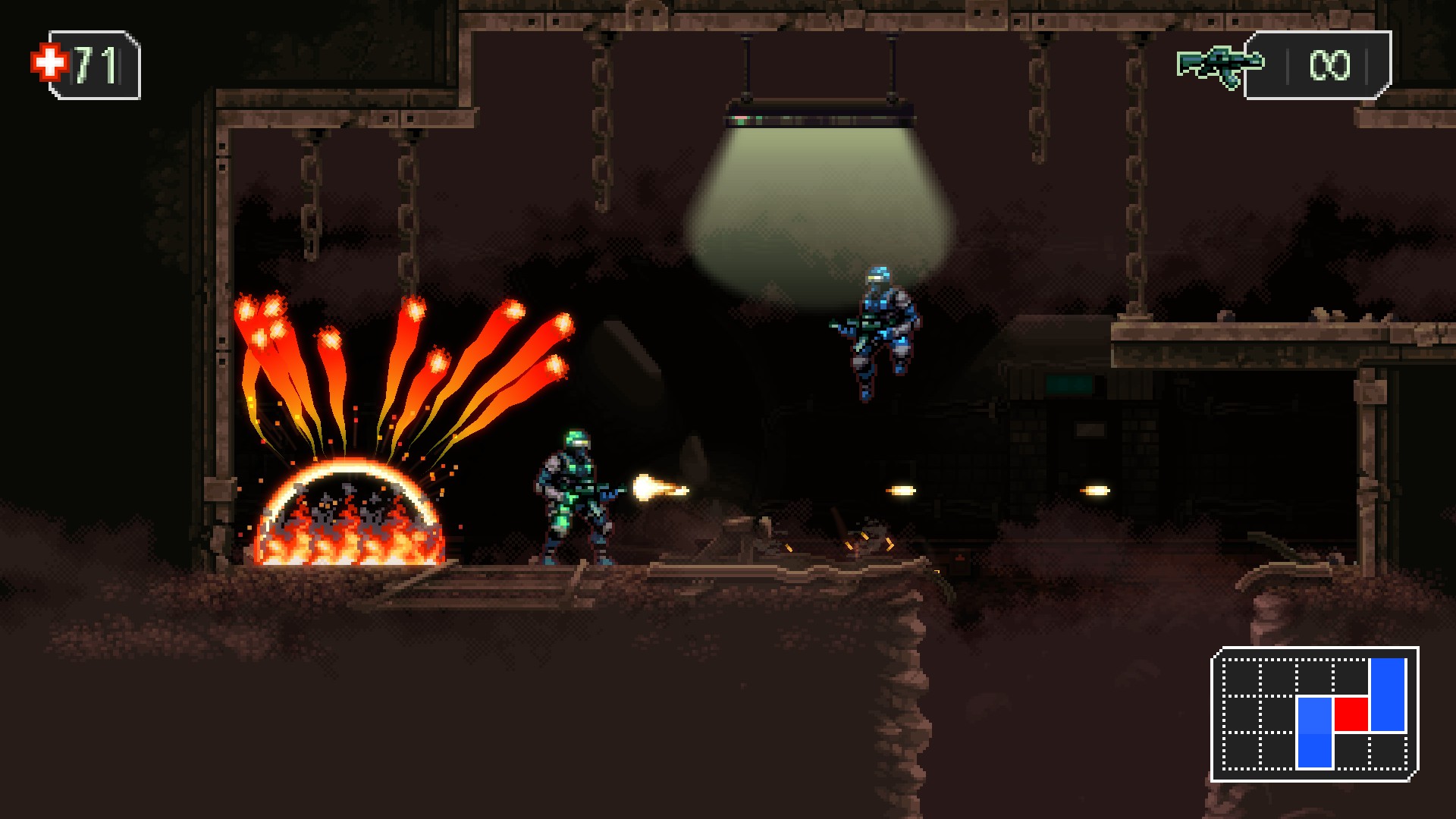 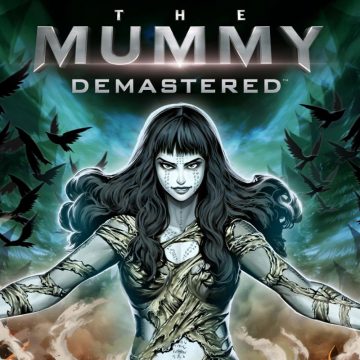 The Mummy Demastered is a Super Metroid game in all but name, and a darn good one at that. It’s based on The Mummy movie released in 2017, the one starring Tom Cruise as the hero and Sofia Boutella as the eponymous Mummy. It’s also the rarest of things: a licensed title that supersedes its source material by a country mile.

Rappelling into caves in Iraq, you’re tasked with establishing contact with the ground team. Descending into progressively eerie locales, you meet alien lifeforms, the evil Ahmanet, and your team mates; deceased, yes, but very much undead. Before you can take stock of your situation, the tunnels begin crumbling, and it’s a race to get the hell out of dodge. 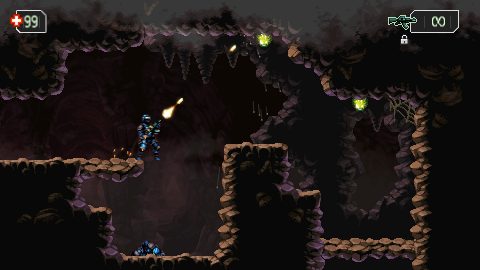 Escape or no, the game then begins proper: as an agent of the shadowy Prodigium organisation, you must journey through the depths of London to find and destroy Ahmanet by any means necessary. The deck is stacked against you succeeding, with numerous foes and an environment that wants you dead. But fail, and something interesting happens.

Immediately following death, you take control of a new member of Prodigium from your last save point. You’re only equipped with a sliver of health and your starting pea shooter, but find and kill the undead version of your previous self and you regain all your vitality, weaponry, and upgrades. So far, so Hollow Knight, but there’s a twist: your zombified alter ego is armed to the teeth with your old arsenal, and isn’t afraid of using it. You’ll need to use every trick in the book (and your superior agility) to get it back.

The controls are pretty standard for anyone who has played a Metroidvania, with buttons for jumping, firing, crouch rolling, changing between your standard blaster and two sub-weapons, and throwing a grenade. The game differs by letting you hold a trigger to root you to the spot while allowing you to shoot in eight directions, Turrican-style. The gameplay is more gun-heavy than Super Metroid, but beware: it’s by no means a run-and-gun, and failure to clean out areas methodically will see you meet your demise quickly. Disappointingly, the jump is finicky and inconsistent, leaving you perplexed at points as to whether it’s your skills or the poor controls. 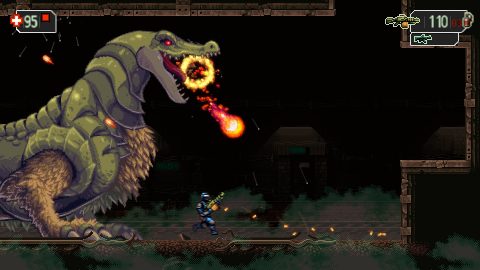 And it’s an eclectic range of enemies that stand in your way. There are many plucked from Egyptian lore, as well as some left-field selections, including bouncing brains, bone-throwing brutes, and flaming skulls, as well as the more earthly bats, boomerang brandishers, and dogs, with plenty more besides.

Thankfully, you have some help. There are health and ammo upgrades, and new abilities to find, including being able to hang off ceilings, dash, take less damage and deal more, and jump higher. Unfortunately, these suffer from poor foreshadowing and signposting. For instance, one level sees you ascending a clock tower (more of which later). Enemies spawn in aggravating places, knocking you back down. You may think you need to persevere, or perhaps need an additional health pack. You’d be wrong: there’s a power up that protects you from being knocked back when you take a hit that’s a requirement to proceed. Thing is, unless you’d stumbled upon it earlier, you’d have no idea it even existed, and in a whole other area to boot. This makes finding a map online almost a necessity, even if it does spoil the game somewhat.

New weapons also assist you in the fight. These range from a sub-machine gun and shotgun, to rockets and, best of all, the Plasma Beam. Found late in the game, this overpowered blaster automatically locks onto foes and fries them in fractions of a second. It’s joyously cathartic to plough through enemies that previously gave you trouble. 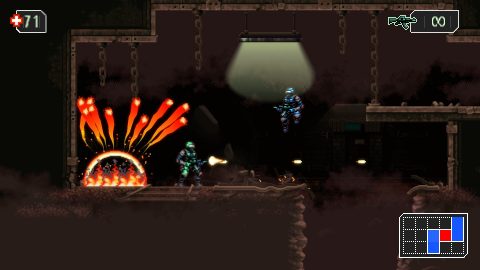 The different areas are unique, from the spooky Graveyard and Forest, to the claustrophobic Subway Tunnels and Prodigium HQ, the post-apocalyptic London Streets, the mammoth Clock Tower, and the final resting place of Ahmanet, the Crusader Tombs. It’s a bit of a blow that there are so few environmental puzzles that take advantage of your new abilities, and the save system feels broken. Instead of saving replenishing your health and ammo, you’re forced to find more of both by harvesting lower-level enemies. In theory, this should add to the difficulty, but in practice it sees you exiting the save room, killing a couple of foes to gain pick-ups, re-entering the save room so enemies respawn, and repeating the whole cycle again. It’s possible to rappel between areas, and catch a ride on a helicopter to fast travel.

A boss dwells in each area. They’re an impressive range of creatures, so gargantuan that the camera often has to zoom out to fit them on screen. The second boss, a dragon, brings Crocomire to mind, with others including a stupendous spider, an enormous Anubis, Ahmanet herself, and her master, the evil god Set. However, the encounters are marred by the same problems that plagued developer WayForward’s spiritual prequel, Aliens: Infestation. Every boss is an absolute bullet-sponge that sees you unloading your grenades and second and third weapons, before chipping away with your starting gun. The skirmishes feel twice as long as they need to be and veer towards frustration and tedium.

Nowhere is this more apparent than at the end of the Clock Tower, where you meet a giant scarab. Avoiding its attack pattern is easy enough, except you have to do it on rotating platforms with the game’s inconsistent jump. Oh, and there are spikes at the bottom of the screen, and the scarab’s third attack involves it breaking through the ceiling, and the platforms disappearing through the floor as new ones appear at the top. The encounter is controller-smashingly maddening, and it’s a wonder it made it past play-testing. 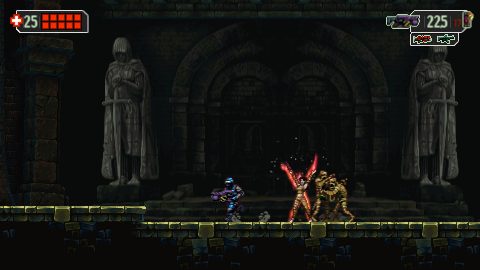 Get to the end of the game, and you’ll receive one of three endings: one for not dying once, a more downbeat affair if you’ve lost agents during your run, and the ‘sad’ ending if you fail to make it back to the helicopter at the end of the game. While there’s no New Game +, there are a variety of achievements to mop up, including uncovering 100% of the map and finding all 50 hidden relics.

The hi-bit pixel-art is fantastic throughout. In particular, the backgrounds have great depth and atmosphere thanks to some stellar parallax scrolling, with some tremendous variation in different areas. The enemies, mostly analogies of those in Super Metroid, have distinct looks, and your agent is well animated, if lacking the charm of the idle poses from Aliens: Infestation.

Tuneful, atmospheric, and varied, the music in The Mummy Demastered lingers in the memory. It’s all spacey synthwave chillout that merits a listen outside of the game, with an additional boss theme that ratchets up the tension of the big fights. The sound effects are nice and chunky and fit the more gun-orientated gameplay well. 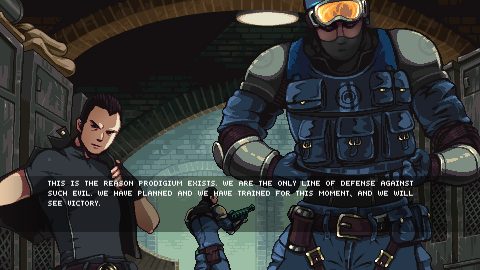 It’s rumored that the reason you take control of an unnamed agent is that Tom Cruise refuses to have his likeness reproduced in a video game. However, in an interview with Wireframe magazine, game director Austin Ivansmith revealed that they chose to make the main protagonist a faceless soldier so they could tie the game in with the planned Dark Universe movie franchise, with your squad starring in subsequent games. Owing to poor reviews of the film, the cinematic universe was cancelled, and hopes of video game sequels bit the dust.

The Mummy Demastered received good to great scores across the board upon release. Despite some grumbles, it is a very good Metroidvania that fans of the genre should play, even if it’s unlikely to convince people new to the genre. It’s been embraced by the speedrunning community, too; where a normal run can take up to seven hours, those speed demons have got it down to just over an hour.