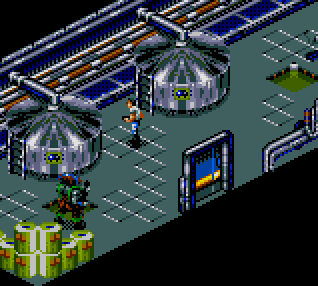 Given the subtitle Maze of Death for its US release, Arena may have an isometric perspective and dystopian future like Shadowrun, but mechanically it revolves solely around navigating mazes, finding keycards and flicking switches to open doors. Along with the most mediocre premise imaginable is a combat system where it’s impossible to aim accurately due to the perspective, and such a chronic lack of ammunition it makes Resident Evil seem like an all-you-can-eat buffet. The enemies are bullet sponges, will infinitely respawn mere seconds after dying, and in later levels can kill you with one hit. Ammunition pick-ups meanwhile are one-time only and painfully scarce. You’ve got a knife, but it’s so useless you might as well be using raspberry jam.

It is ludicrously difficult. Every level contains bottomless pits which cost a life, and the designers chose to make these sections as frequent and frustrating as possible. There are lengthy conveyor belt sections where without warning drone guns will materialise to shoot you off. There are floating platform sections where you need to move from one to another, except stand still and the oncoming platform will knock you off. You’re supposed to push against it, but this often causes you to overshoot. The collision detection is dodgy at best and again there are enemies shooting you off. The best thing is that when you reach the labs these pitfalls, which you’ve been trying to avoid, suddenly become the mandatory means of accessing different areas! After the labs, these pitfalls will again kill you. Talk about counter-intuitive… Feeling that floating platforms weren’t infuriating enough, the developers also added teleportation pads to these areas for maximum confusion.

Later levels even introduce the concept of mazes which change shape, preventing you from memorizing them. One minute a door leads into a lab, the next it drops you outside a warehouse. Selecting the Easy difficulty doesn’t really fix things, it just removes several levels ?though perhaps this is for the best. The password system also only works every few areas or so, making it useless. The isometric engine for Arena might be fairly smooth, but the developers wasted it on a blatantly bullshit and badly executed idea. Still, you have to admit the European cover art is possibly the best cover art ever.